Ukraine asked Alexander Vindman to be its defense minister, and other takeaways from his impeachment testimony 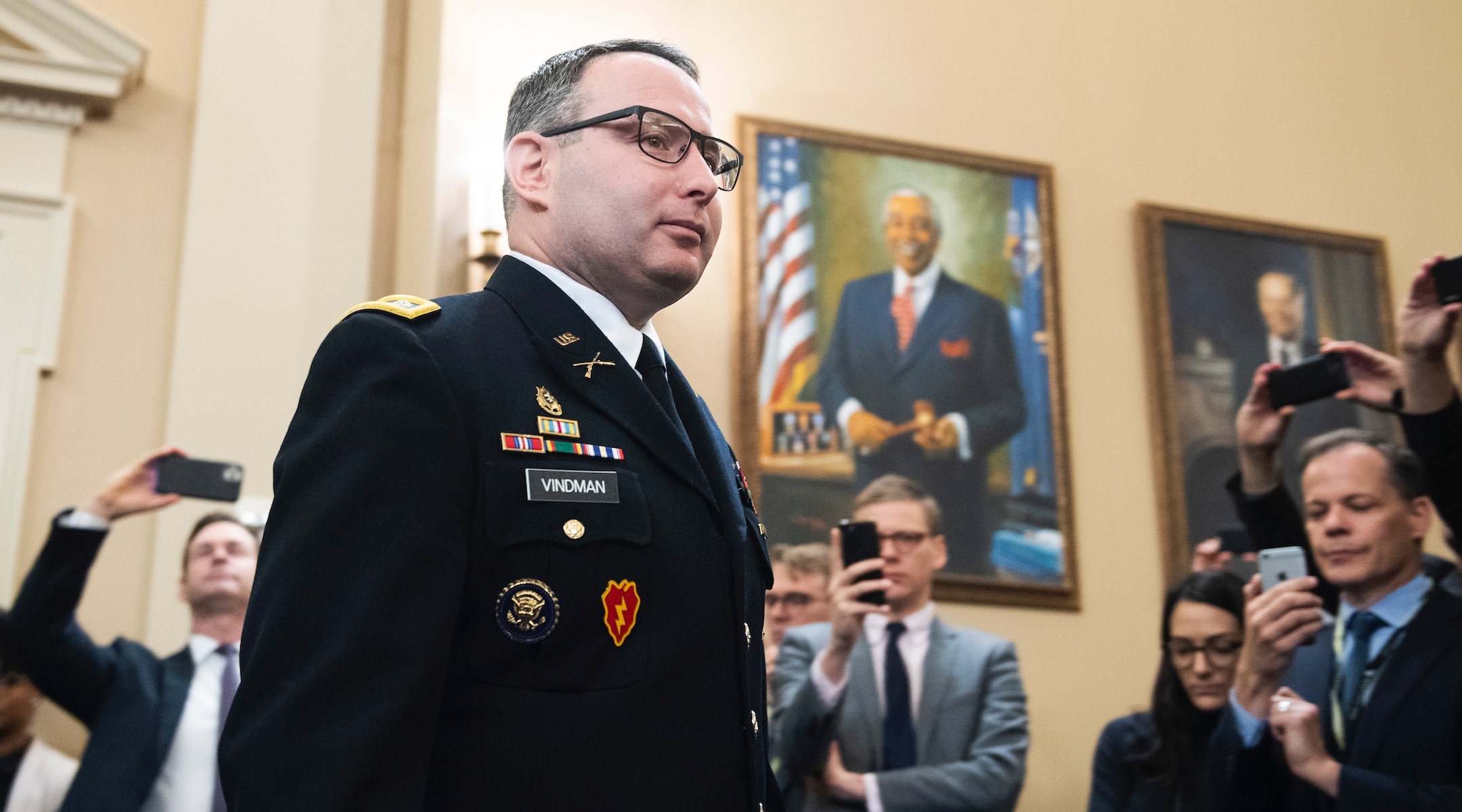 (JTA) — Lt. Col. Alexander Vindman, the Jewish National Security Council staffer whose firsthand account of the July phone call between President Donald Trump and the president of Ukraine is at the center of the impeachment inquiry, is testifying in the impeachment hearings on Tuesday. Here are the biggest takeaways from his testimony to the House Intelligence Committee.

Vindman was thrice offered the position of Ukrainian defense minister. He rejected the offers.

This minor bombshell has not yet been reported. Steve Castor, a Republican staff attorney, asked whether Oleksandr Danylyuk, then Ukraine’s national security adviser, offered Vindman the post.

“Every single time, I dismissed it,” said Vindman, a Ukraine native. “Upon returning, I notified my chain of command and the appropriate counterintelligence folks about the offer.”

Vindman later said the offer would be “a great honor” but declined because he is an American.

“I’m an American, I came here when I was a toddler, and I immediately dismissed these offers, did not entertain them,” he said. “The whole notion is rather comical that I was being asked to consider whether I would want to be the minister of defense. I did not leave the door open at all. But it is pretty funny for a lieutenant colonel in the United States Army, which really is not that senior, to be offered that illustrious a position.”

He mentioned his Jewish family’s immigration story in his opening statement.

The statement concluded with Vindman retelling his family’s immigrant story and an expression of appreciation for U.S. democracy in contrast to Russia’s authoritarian government. Vindman’s family was among a group of Soviet Jewish refugees that was allowed to immigrate to the United States in 1979. He and his brothers have served in the U.S. military.

“In Russia, my act of expressing my concerns to the chain of command in an official and private channel would have severe personal and professional repercussions, and offering public testimony involving the president would surely cost me my life,” he said in the statement. “I am grateful for my father’s brave act of hope 40 years ago and for the privilege of being an American citizen and public servant, where I can live free of fear for mine and my family’s safety.”

Vindman also addressed his father personally in the statement, telling him not to fear retribution because of the testimony.

“Dad, my sitting here today, in the U.S. Capitol talking to our elected officials, is proof that you made the right decision 40 years ago to leave the Soviet Union and come here to the United States of America in search of a better life for our family,” he said. “Do not worry, I will be fine for telling the truth.”

He pushed back against attacks on his loyalty to the United States.

Some Trump supporters have claimed that Vindman, a career U.S. Army officer who was injured in battle in 2014 and awarded a Purple Heart, is more loyal to interests in his native Ukraine than to the United States.

During his testimony, Vindman defended himself against those attacks.

“I’m in uniform wearing my military rank,” he said. “The attacks that I’ve had in the press, on Twitter, have kind of eliminated the fact — marginalized me as a military officer.”

He said he’s definitely not a “Never Trumper.”

Asked directly in the hearings by Rep. Jim Himes, D-Conn., if he were a “Never Trumper” — something that Trump called Jennifer Williams, the other person testifying Tuesday, in a tweet on Sunday — Vindman had a pithy response that’s sure to make the rounds on social media: “I’d call myself never partisan.”