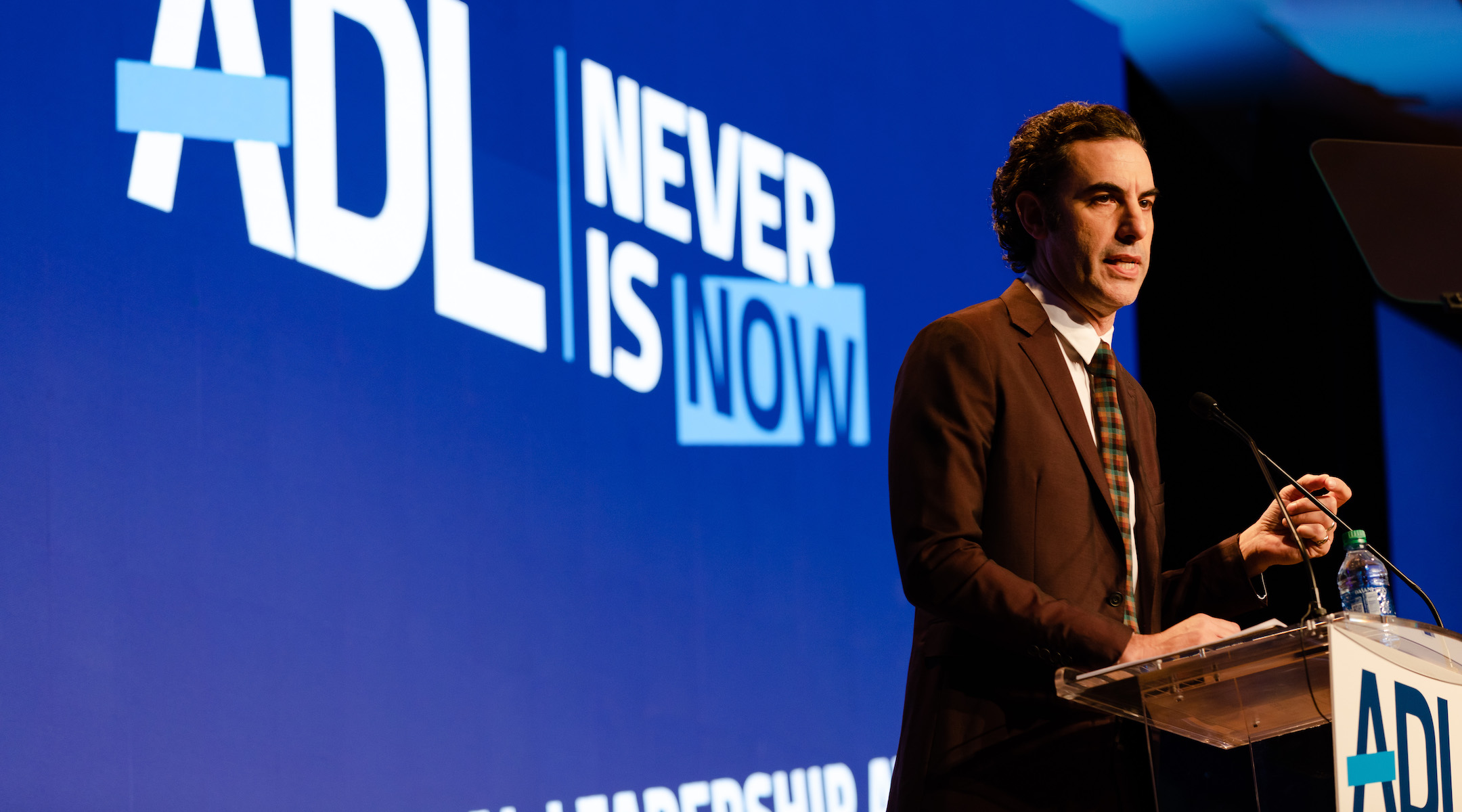 NEW YORK (JTA) — Sacha Baron Cohen has made a career out of playing absurd comedic characters, from the dopey Brit Ali G to the Kazakh journalist Borat to the Israeli veteran Erran Morad. He rarely gives interviews and stays relatively far from the movie star limelight.

But on Thursday, Cohen tossed aside the humorous facade to excoriate the social media industry and the “autocracy” he says it promotes in a non-ironic speech.

After receiving the international leadership award from the Anti-Defamation League at its annual conference at the Javits Center in Manhattan, the British Jewish comedian slammed social media sites as the “greatest propaganda machine in history” — reserving most of his 15-minute speech to specifically critique Facebook and its CEO, Mark Zuckerberg.

“Facebook, YouTube and Google, Twitter and others — they reach billions of people. The algorithms these platforms depend on deliberately amplify the type of content that keeps users engaged — stories that appeal to our baser instincts and that trigger outrage and fear,” Cohen said. “It’s why YouTube recommended videos by the conspiracist Alex Jones billions of times. It’s why fake news outperforms real news, because studies show that lies spread faster than truth.

“And it’s no surprise that the greatest propaganda machine in history has spread the oldest conspiracy theory in history — the lie that Jews are somehow dangerous. As one headline put it, ‘Just Think What Goebbels Could Have Done with Facebook.‘”

Cohen spent a significant part of his speech criticizing a recent address Zuckerberg gave at Georgetown University in which the Facebook founder spoke about the importance of upholding free expression on social media. Cohen called out Facebook for allowing political ads on its platform without verifying the veracity of their claims. Twitter and Google have recently taken steps to ban such ads.

“Under this twisted logic, if Facebook were around in the 1930s, it would have allowed Hitler to post 30-second ads on his ‘solution’ to the ‘Jewish problem,’” Cohen said, saying the site should fact check all political ads.

“Why can’t we have more of a delay so this trauma-inducing filth can be caught and stopped before it’s posted in the first place?” he asked.

Cohen said that social media companies should be held responsible for the content spread on their sites, referencing a federal law that shields them from liability for specific posts.

“Maybe it’s time to tell Mark Zuckerberg and the CEOs of these companies: You already allowed one foreign power to interfere in our elections, you already facilitated one genocide in Myanmar, do it again and you go to jail,” Cohen said.

The speech was not completely devoid of humor — Cohen managed to joke about a key Jewish adviser for President Donald Trump.

Cohen additionally addressed the idea that he promotes anti-Semitic stereotypes in his movies, which groups like the ADL have criticized.

“Now I’m not going to claim that everything I’ve done has been for a higher purpose,” he said. “But when Borat was able to get an entire bar in Arizona to sing ‘Throw the Jew down the well,’ it did reveal people’s indifference to anti-Semitism.”

Cohen said he has been “passionate about challenging bigotry and intolerance” his entire life and wrote an undergraduate thesis on the American civil rights movement “with the help of the archives of the ADL.”

The ADL said that more than 1,600 people attended the daylong event, which included a range of sessions on anti-Semitism and hate.

The organization also honored Hamdi Ulukaya, the CEO and founder of the Chobani yogurt company. Ulukaya, a Kurd from Turkey, has donated millions to help refugees and hired them in his factories.

Ulukaya used his speech to condemn hate and call on businesses to help refugees.

“[I]f government isn’t willing to act, I believe that business must lead,” he said. “This isn’t about politics. It’s about basic human decency.”