Bloomberg or Bernie: Which Jewish candidate do American Jews want? 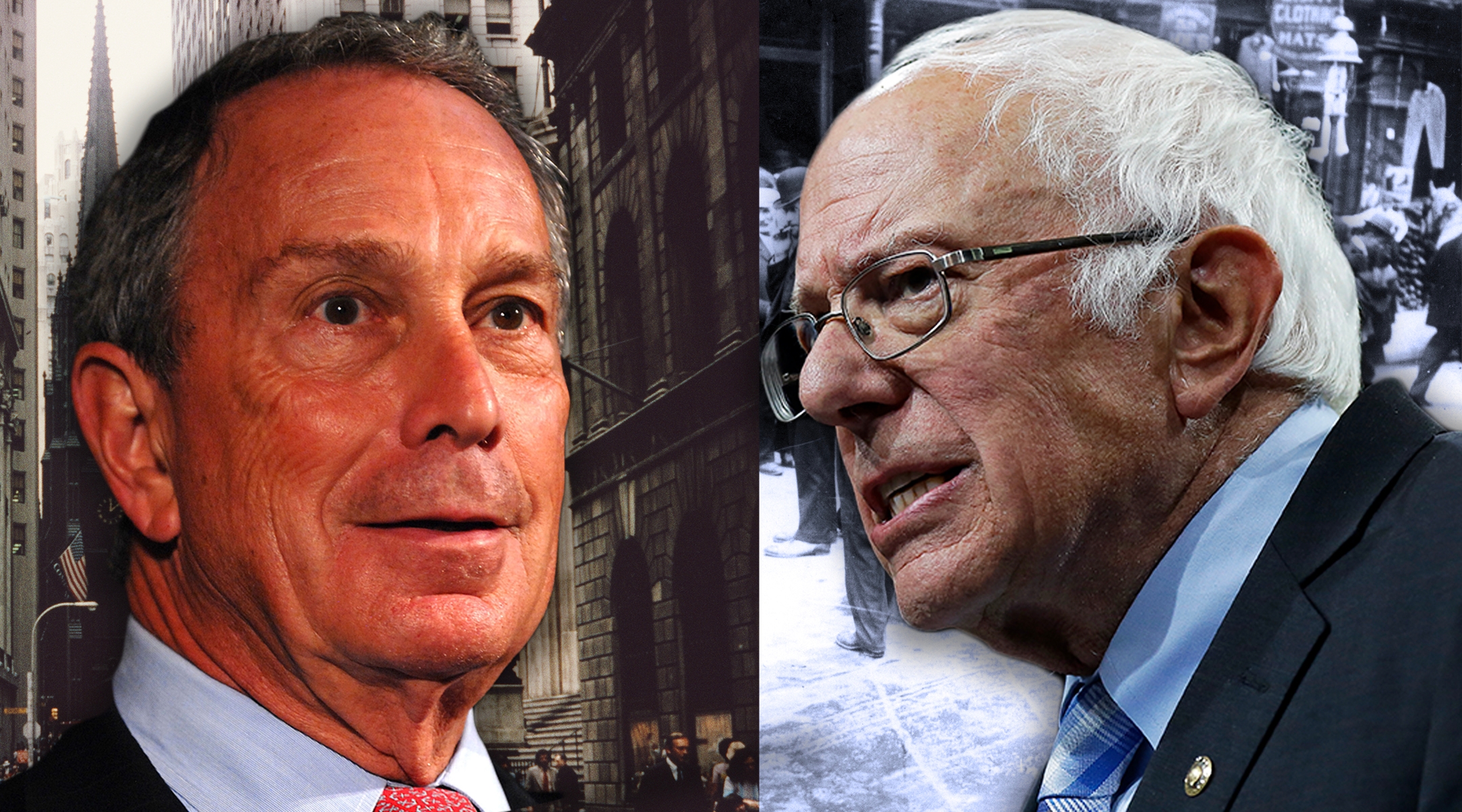 Mayor Michael Bloomberg and Sen. Bernie Sanders. Behind Bloomberg: Wall Street in the 1960s. Behind Sanders: Jewish salespeople on the Lower East Side of New York City in the 1890s. (Getty Images/JTA montage)
Advertisement

NEW YORK (JTA) — First Bernie Sanders. Now Michael Bloomberg. This cycle’s Democratic primary is shaping up to be the all-time greatest troll of white nationalist Twitter — a battle royale featuring both a Jewish socialist from Brooklyn and a Jewish billionaire who made his fortune catering to Wall Street.

It’s not necessarily just the anti-Semites who will be triggered. The fight between Uncle Bernie and Mayor Mike has the potential to tap into a century’s worth of Jewish dinner table political arguments and set off a vigorous debate over the past, present and future of American Jews and their politics.

Since President Franklin D. Roosevelt, American Jews have been voting for Democratic presidential candidates, almost always by overwhelming margins — hence sociographer Milton Himmelfarb’s famous quip that American Jews “earn like Episcopalians and vote like Puerto Ricans.” His point was that even as they grew more affluent during the post-World War II era, the overwhelming majority of American Jews stayed true to their outsider roots by casting their ballots for liberal candidates.

But the story is a bit more complicated.

In 1880, there were only 250,000 Jews in America, most of them of German and Portuguese origin and fairly well established. By 1920, thanks to decades of immigration, the total had spiked to 4 million, with five out of six American Jews hailing from Eastern Europe. Many of these new Jewish immigrants arrived with next to nothing.

Back then the Jewish street wasn’t Democrat. It was decidedly socialist.

Take 1920, the last time a Democratic nominee failed to win the Jewish vote. That year the Republican, Warren G. Harding, not only recorded a landslide victory, but according to the book “Jews in American Politics,” is believed to have won 43 percent of the Jewish vote. Only about 20 percent of Jews voted for the Democrat, James Cox.

The real Jewish story that election year was Eugene V. Debs, the Socialist candidate for president (and Sanders’ hero). Debs did 13 times better with Jews than with the rest of the electorate, finishing a close second in the Jewish vote with 39 percent — compared to just 3 percent of the overall vote.

Jewish politics changed, however, as the Jews escaped the sweatshops of the Lower East Side and eventually settled into the American Dream. While most of them remained on the left side of the political spectrum, they traded in their socialism for a different brand of liberalism.

Which brings us to Bloomberg, who in many ways embodies this political shift. The former New York mayor is an outspoken social liberal who supports a strong safety net and public education system — but is also an enthusiastic defender of capitalism and free trade. Worker rights were paramount for Jews who voted for Debs. Bloomberg’s liberalism — like the liberalism of many contemporary American Jews — is more animated by social issues.

Bloomberg, for example, defends Wall Street while waging war against the gun industry. In contrast, Sanders has sought compromise with gun advocates but is uncompromising in his attacks on the financial sector and its billionaires.

Until relatively recently, it was safe to say that Sanders was the relic, a reminder of where Jews once were politically. Bloomberg told us about where they were today.

After all, Bloomberg received high levels of support from the Jewish community during much of his time as mayor of New York. Sanders, on the other hand, trailed Hillary Clinton in Jewish support in 2016.

This time around, Sanders is working hard to fuse his old-school it’s-economic justice-stupid message with a more hearty embrace of intersectionality and identity politics. Not surprisingly, his criticisms of Israeli Prime Minister Benjamin Netanyau are sharpening and he’s promising to use U.S. aid to pressure Israel into achieving a two-state solution.

In past years this tack, along with Sanders’ corresponding embrace of prominent Boycott, Divestment and Sanctions supporters, would have sunk the Vermont senator among the majority of Jewish voters, especially with a familiar pro-Israel Democrat like Joe Biden in the race. But with anti-Trump passions raging and many Democratic presidential candidates stampeding to the left, it’s unclear if the old rules still apply.

Bloomberg is positioning himself as the candidate best suited to grab the steering wheel from President Trump and get America back on track. Sanders’ message is that America had been broken for a very long time; Trump just made things worse.

Which vision of the future do America’s Jews see themselves in?