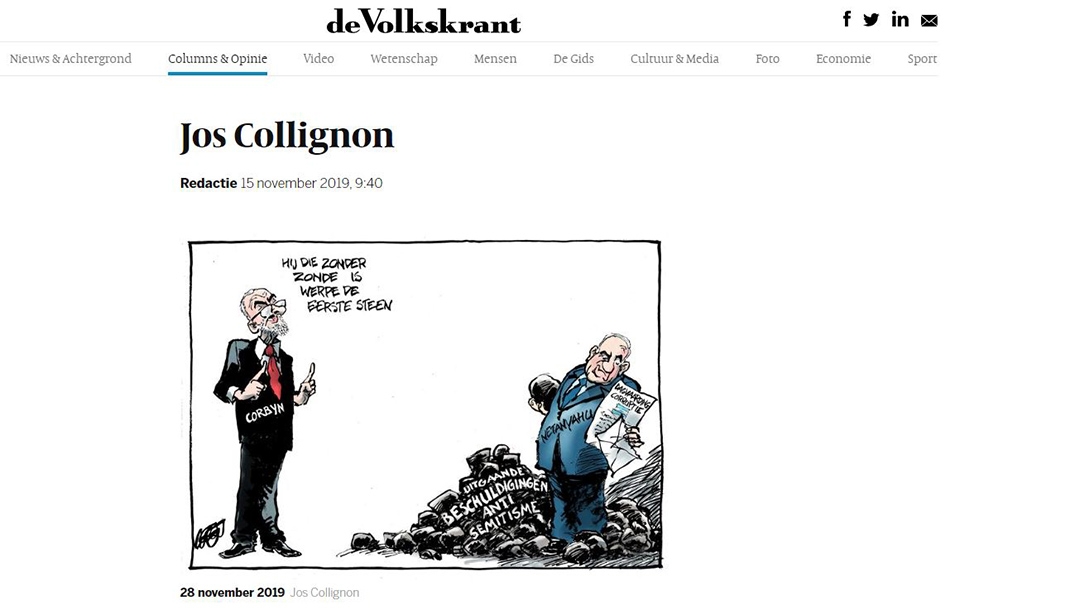 AMSTERDAM (JTA) — A major Dutch daily ran a caricature whose critics say reinforces anti-Semitic tropes and suggests that Israel’s prime minister is attacking Britain’s Labour Party over anti-Semitism to distract from corruption charges against him.

In the caricature Thursday in De Volkskrant, Benjamin Netanyahu is depicted holding a stone labeled “anti-Semitism charges” in one hand and reading an indictment for corruption in the other.

Opposite the Israeli leader is Jeremy Corbyn, who heads Labour Party, which is under an investigation by the British government’s Equality and Human Rights Commission over complaints that Corbyn’s anti-Israel agenda and far-left politics have made it institutionally anti-Semitic.

Corbyn says: “Let him who is without sin cast the first stone,” an utterance attributed to Jesus in the New Testament.

Netanyahu has rarely referenced Corbyn publicly and has not spoken out about anti-Semitism in Labour. Netanyahu condemned Corbyn’s 2014 laying of a wreath on the graves of Palestinian terrorists in 2018.

The Center for Information and Documentation on Israel, a Dutch-Jewish watchdog group on anti-Semitism, called the caricature’s statement “absurd” and said that British Jews, not Netanyahu, are the ones making allegations of anti-Semitism against Corbyn. In 2013, Corbyn defended a mural depicting Jewish men playing monopoly on the backs of dark-skinned men.

“Jews have a right to speak out against anti-Semitism. The fact that an indictment was filed against the Israeli prime minister is irrelevant,” the center wrote. It also said the caricature “reaffirms the anti-Semitic stereotype that Jews are more loyal to Israel than countries where they live.”

Volkskrant caricaturist Jos Collignon defended the work, linking the watchdog group’s criticism to Dutch Jewry’s trauma from the Holocaust — the center did not mention the genocide — and labeling it an attempt to prevent supporters of Palestinian rights from speaking out.

“When allegations of anti-Semitism occur, the Israel lobby is never far behind,” Collignon said. “I think you’ll never understand this is the behavior of victims. There is no point linking modern-day opponents to atrocities from the past. We’re all being labeled as Nazi sympathizers.”