Georgia’s 2 US Senate seats will be open in 2020. Jon Ossoff and Joe Lieberman’s son are vying for them. 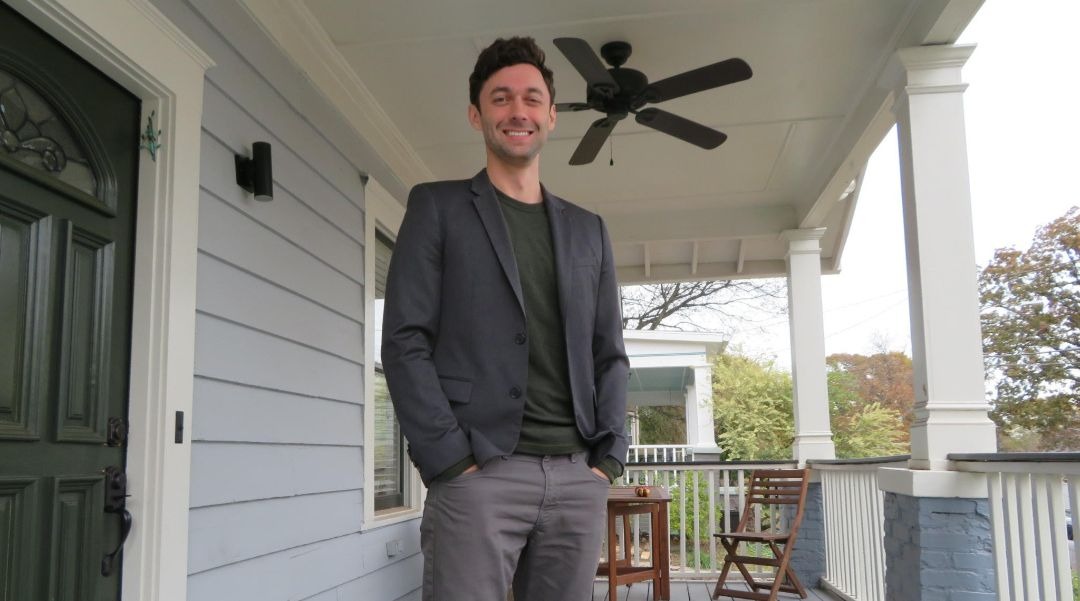 Jon Ossoff poses on his porch in Atlanta, Nov. 21, 2019. The film company CEO is running for the Senate after narrowly missing an upset bid for the House in 2017. (Ron Kampeas)
Advertisement

ATLANTA (JTA) — Voters in Georgia will face elections next year for each of the state’s two U.S. Senate seats. Jewish Democrats are vying to be in the mix in both races.

Incumbent David Perdue, a Republican, is up for re-election in 2020, while Johnny Isakson, also from the GOP, is retiring at the end of the year because of ill health. Georgia’s Republican governor, Brian Kemp, almost certainly will name someone from his party to replace Isakson, but both slots will be on the ballot in November.

Seven Democrats are contending for Perdue’s spot and two for Isakson’s. Each list features a Jewish candidate with name recognition: Jon Ossoff is running for the Perdue seat and Matt Lieberman is going for Isakson’s.

The Jewish Telegraphic Agency spoke to Ossoff and Lieberman last week in Atlanta. Here’s a quick compare and contrast.

Name recognition: Ossoff, 32, the CEO of a film company that makes investigative documentaries, made national headlines in 2017 when he finished first in an open primary for a special House election in the 6th District. His strong showing in a longtime Republican stronghold was the first concrete evidence that the “resistance” to President Donald Trump could rally not just marchers but voters. Ossoff lost narrowly in the June runoff, but says now that the exposure makes him a natural to oust Perdue.

“In six months we moved that district by 20 percent,” he said. “We built a massive Democratic infrastructure, we ran the largest get-out-the-vote in Democratic history.”

As in 2017, Ossoff has the endorsement of two giants in the state’s Democratic Party and its African-American community: Rep. John Lewis, the civil rights icon for whom he once interned, and Rep. Hank Johnson, for whom Ossoff worked as a congressional aide.

Lieberman, a 52-year-old entrepreneur, makes no bones about the name recognition he hopes to tap: His father, former Connecticut Sen. Joe Lieberman, was the first Jewish candidate on a major party presidential ticket when Al Gore named him his running mate in 2000.

“When I was doing my due diligence on this, I did a mini poll. One of the things I tested was my dad’s name identification, and it’s quite high in Georgia,” Lieberman said. “That’s not me, but it will make it easier for people to latch on to why I’m running because it’s a point of familiarity.”

Lieberman, who moved here 15 years ago to helm a Jewish day school, has been fundraising in his father’s home state of Connecticut.

Matt Lieberman surprised some Democratic insiders by declaring for the open Senate seat, but said getting a jump on fundraising was necessary. (Ron Kampeas)

The main issue: For both candidates it’s health care, which has become the premier issue in a state where black maternal mortality rates are off the charts, abortion is severely restricted and half of the 159 counties do not have an obstetrician-gynecologist.

Health care is more directly addressed at the state level, but Ossoff and Lieberman both see steps they can take in Washington. Ossoff said he would back including a public insurance option in any health care reform act and would seek to invest in rural hospitals and clinics.

Lieberman is on the same page. He wants to protect and expand the Affordable Care Act, President Barack Obama’s signature domestic achievement, and add a public option.

The odds: Each candidate faces tough obstacles should they win the nomination. Georgia is inching Democratic, but it’s not there yet.

Ossoff’s bid may be daunted by Perdue’s incumbency, but Ossoff thinks that will be offset by the senator’s close association with Trump.

“Georgians are awake to the corruption of this presidency and David Perdue’s servility will be his downfall,” he said.

Lieberman declaring for the open seat surprised some Democratic insiders, who said a better calculus would be to see who Kemp names and build a strategy from there. Trump is pressuring Kemp to name Rep. Doug Collins, among the president’s most vigorous defenders, but Kemp reportedly is resisting because Trump has been a drag on Republican races this year in Kentucky, Louisiana and Virginia.

Lieberman said it made sense to get out early and ahead of the fundraising game.

The Trump factor: Ossoff notably refrained from mentioning Trump during his 2017 run, a strategy that Democrats running in conservative districts embraced with success elsewhere. This year, with Trump mired in impeachment proceedings and blamed for Republican failures in Southern states, that thinking has changed.

“Folks in Georgia and across the country increasingly recognize Donald Trump’s unfitness for office and the way he has debased the office,” Ossoff said.

Lieberman also makes a case for running against Trump, but like his father he is disinclined to make personal attacks on his rivals.

“He’s the elephant in the room, it’s hard not to mention him,” Lieberman said. “If Trump is no longer president and if the Democrats control the Senate, there is a world of difference in this country.”

Israel: Lieberman squarely blames the impasse in Israeli-Palestinian peacemaking on the Palestinians, which perhaps not coincidentally has been his father’s default position for years.

“The problem relates to the Palestinians and even more so their leadership never coming to terms of acceptance with the fact there’s a Jewish state of Israel sitting there,” he said. “And until that’s fully accepted as reality and not looked at as something temporary that needs to change, it’s going to be hard to resolve that.”

Ossoff sees intractability on both sides and a role for a robust U.S. involvement.

“I think the two-state solution is on life support and I’m deeply pessimistic that any of the parties — the government of Israel, the Palestinian Authority, Hamas — are seriously pursuing it,” he said.

Doing Jewish: Like his father, Lieberman is Sabbath observant. Religiously, he calls himself “Conservadox” —  a portmanteau of Orthodox and Conservative Judaism. Lieberman said he recently started driving to synagogue because Atlanta’s notorious sprawl mitigates against living walking distance from synagogue, but he won’t be campaigning on Shabbat.

“I’m pretty sure that will be a new thing in Georgia,” he said.

Ossoff said his experience working with some of the state’s most senior African-American politicians makes him a natural to build bridges between the communities. His first political involvement was joining Johnson’s 2006 campaign to oust Cynthia McKinney, one of the most hostile legislators to Israel.

Also, Ossoff notes, “My wife is Jewish.” Alisha Kramer played an unintended role in her husband’s 2017 campaign when rivals dinged him for not living in the 6th District, a fact Ossoff chalked up to Kramer, then his fiancee, needing to live closer to Emory University, where she was in medical school.

During the 2017 campaign, Michael Rosenzweig, a leading Democratic activist, recalled asking Ossoff to speak at a program that he organized at a Jewish home for the elderly.