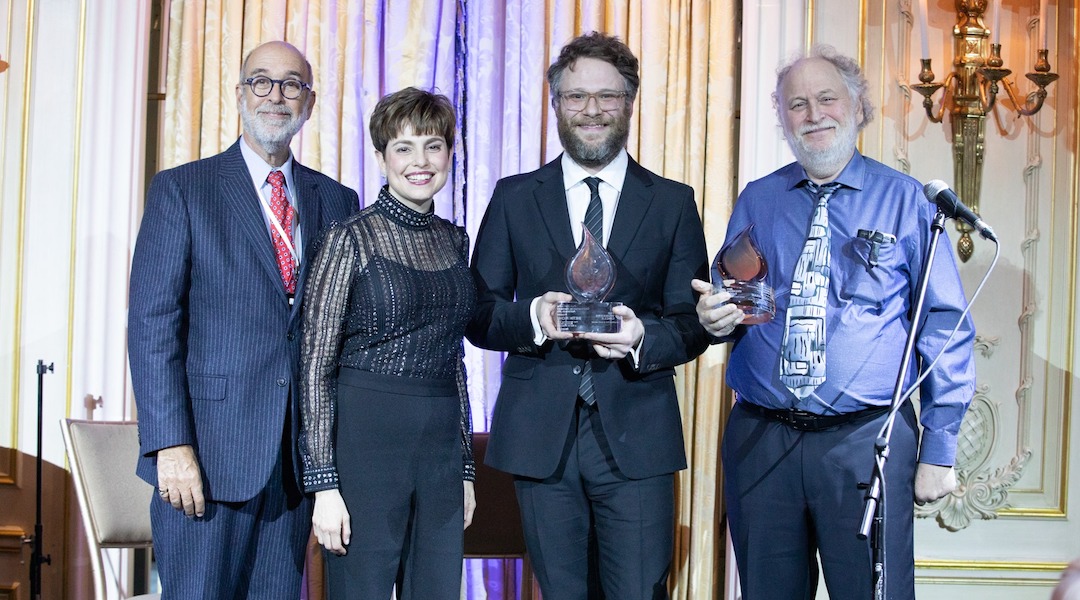 NEW YORK (JTA) — Seth Rogen and his father were honored by the secular Jewish group The Workers Circle — formerly known as The Workmen’s Circle until Monday night — for their contributions to Jewish culture, activism and promotion of the Yiddish language.

Rogen, 37, who usually plays Jewish characters in his movies, recently studied Yiddish for “An American Pickle,” an upcoming film in which he plays a Jewish pickle maker who emerges from a pickle barrel after being stuck there for 100 years.

Rogen’s father, Mark, 66, was an assistant director of The Workers Circle chapter in Los Angeles. Both of Rogen’s parents were Labor Zionists who have performed in Yiddish theater productions.

The Workers Circle debuted its new name at a ceremony Monday in Manhattan nearly 120 years after its founding in 1900.

“As the first woman to lead the organization, I am proud to uphold a welcoming and inclusive culture,” the group’s executive director, Ann Toback, said in a news release. “Everything we do communicates our commitment to living our progressive values, and that includes choosing a name that reflects both our origin and our contemporary ideals.”

The Rogens were presented with the organization’s Generation to Generation award. In a short speech, the younger Rogen described the room as having “more people who speak Yiddish” than there has been “in any room since the shtetl in the 1920s.”

The actor and filmmaker also added an anecdote about activism: When Seth was a child, his father made the news in his native Vancouver for interrupting a Hanukkah lighting ceremony to yell at an adversary, a man named Bill Vander Zalm, about all his “injustices.” (He did not elaborate.)

The elder Rogen did so even though his wife, Sandy — the couple met on a kibbutz in Israel in the 1970s — told Mark that she would pretend not to know him if he went through with the plan to yell at the man during Hanukkah.

“If you believe in something,” Seth Rogen said, “you should stand up for it, and yell about it, and scream about it, even if it will make you look so nuts that your own wife pretends not to know who you are.”