Leave the Holocaust out of your self-promotion, political agenda and profit-seeking 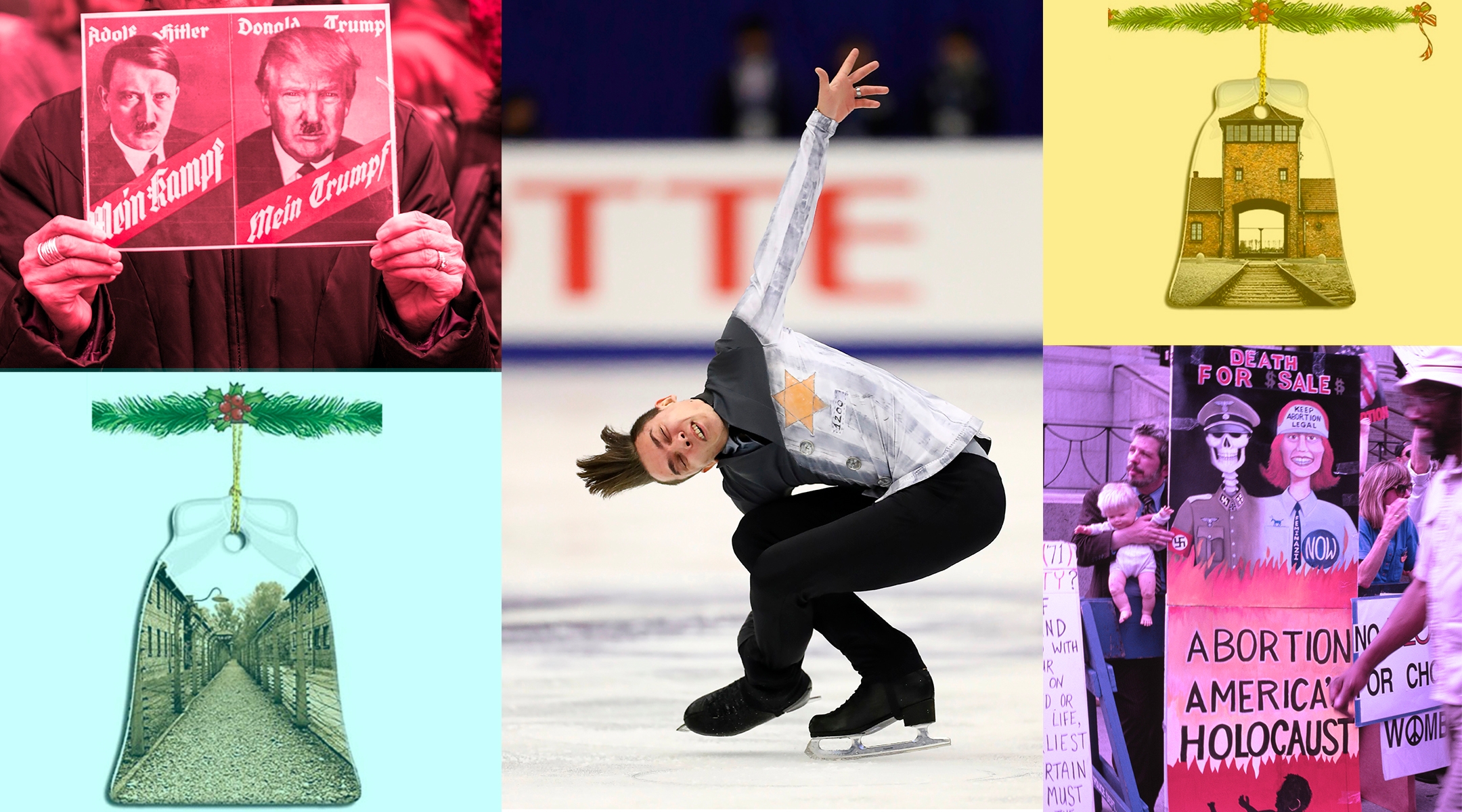 NEW YORK (JTA) — Here we go again: Just this week, two more cases of the abuse of Holocaust imagery have surfaced and created an international stir.

In November, Russian figure skater Anton Shulepov wore an Auschwitz-themed costume during his free skating performance at the Grand Prix of Figure Skating event. To compound the offense, the International Skating Union listed it on Sunday as a contender in the best costume category, which is open to voting from the public. After protests, the skating union quickly removed the Shulepov costume from its top list.

That same day, Amazon announced it was removing holiday ornaments that displayed an image of the same Nazi concentration camp on the products from its marketplace.

Unfortunately, Nazi analogies and imagery have been proliferating for some time. For more than a decade, inappropriate and offensive comparisons to the Holocaust have increasingly cropped up in popular culture in the United States. Sports and other celebrities have compared their personal struggles to those of Anne Frank or, at a traumatic time in their lives, make inappropriate comparisons to Hitler or the Holocaust to make a point.

Then there is the use of Nazi analogies to make a political point. Sometimes it’s by pro-life individuals who refer to abortion as worse than the Holocaust. Sometimes it’s by folks on the left who are troubled by Donald Trump’s behavior and refer to him as a second Hitler.

And some, like Shulepov, are simply looking for attention. The use of concentration camp designs, the pinning of the Jewish yellow star and the very word Auschwitz definitely cause people to sit up.

Each manifestation is offensive and insensitive in its own way. The use of Holocaust references by high-profile public figures such as entertainers trivializes history and the political use of the Holocaust stops civil discussion dead in its tracks. In each case, the attention seekers don’t think for a second about those who actually perished in the gas chambers.

They all deserve repudiation. The murder of 6 million Jews, including 1.5 million children, is not a subject for glib analogies, lightheartedness or political exploitation.

In calling out those who misuse the memory of the Holocaust, one must distinguish between the motives of the offenders. There are meaningful differences between those who must be called out for their evil intent, those who are undermining rational discussion about serious issues and those who are guilty of self-promotion at the expense of the victims of genocide.

Are there occasions where it would be deemed legitimate to cite the Holocaust or compare something to those tragic events? Historical and political analysis surely leaves room for serious comparisons. In the popular sphere, however, it is far better to be cautious and generally avoid such usage.

All this matters more and more, not only because of the general debasement of facts and history, but because the Holocaust itself is either being questioned, ignored or complained about.

Holocaust denial is alive and well in extremist circles. White supremacists like David Duke and Arthur Jones and Islamist extremists like Iran’s former leader Mahmoud Ahmadinejad simply deny the Holocaust and claim it’s a fantasy foisted on the world by all-powerful Jews.

ADL’s Global 100 Survey of 101 countries several years ago revealed that 45 percent of the respondents indicated that they had either never heard of the Holocaust or weren’t sure.

And ADL’s most recent poll of 18 countries showed that 30 percent of people believe that Jews talk too much about the Holocaust.

The misuse of Holocaust analogies and imagery is not only a slap in the face to all those who died. It is also contributing to the trivialization and diminution of the understanding of those horrific events which are so important in making sure that such things never happen again.