Jewish groups denounced Trump’s insinuations about Jewish wealth. So why do some say they went easy on him? 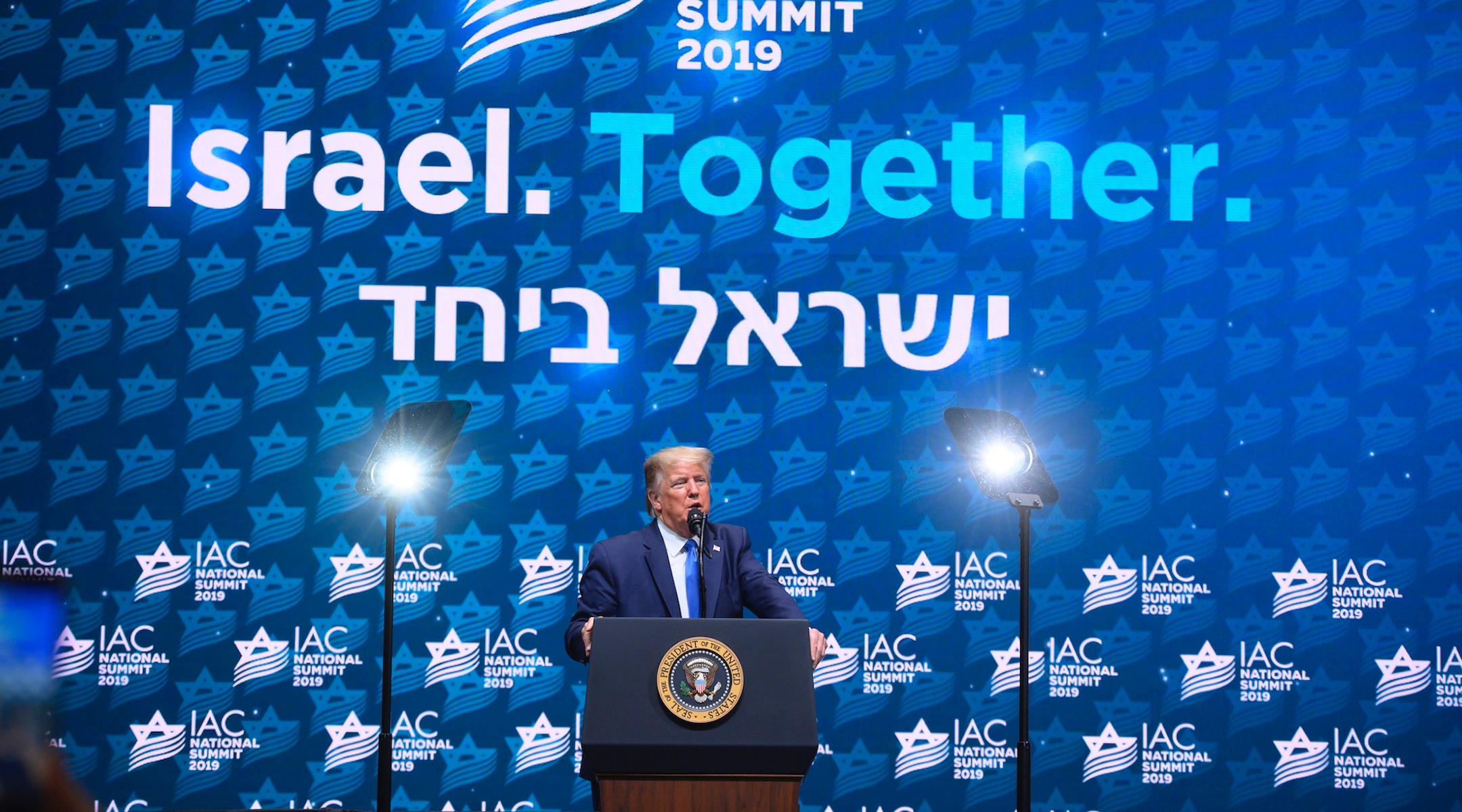 At the event in Florida, the president slammed Jews who “don’t love Israel enough” and implied that Jews would not vote for Democratic candidate Elizabeth Warren because of their wealth.

After telling members of the audience that “a lot of you are in the real estate business,” Trump went on say that they “have to” support his re-election because there’s no alternative.

One of Warren’s signature policy initiatives is a tax on households with a net worth of $50 million or more.

Trump’s speech was met with loud applause and vigorous chants of “four more years.” But several Jewish groups, including the American Jewish Committee and the Anti-Defamation League, took to Twitter to criticize his comments.

“Dear @POTUS  — Much as we appreciate your unwavering support for Israel, surely there must be a better way to appeal to American Jewish voters, as you just did in Florida, than by money references that feed age-old and ugly stereotypes. Let’s stay off that mine-infested road,” the AJC said in a tweet Sunday.

“While important @POTUS called out BDS and #antiSemitism, it’s essentially undone by his own trafficking of #antiSemitic tropes: questioning American Jews’ loyalty to Israel and asserting that Jewish voters only care about their wealth,” wrote the ADL’s CEO and national director, Jonathan Greenblatt.

While important @POTUS called out BDS and #antiSemitism, it's essentially undone by his own trafficking of #antiSemitic tropes: questioning American Jews’ loyalty to Israel and asserting that Jewish voters only care about their wealth. https://t.co/m14rh45C5b

But for some, the condemnations weren’t strong enough.

Rabbi Jill Jacobs, the executive director of the progressive group T’ruah: The Rabbinic Call for Human Rights, accused the AJC of not being as harsh on Trump as it had been on liberals who made anti-Semitic comments.

“Not exactly the tone of their condemnations of antisemitism from the left, is it?” Jacobs wrote in a response to AJC’s tweet. “The President of the United States is making antisemitic remarks & consorting with Nazi sympathizers. Treat that like the big deal it is.”

Not exactly the tone of their condemnations of antisemitism from the left, is it?

The President of the United States is making antisemitic remarks & consorting with Nazi sympathizers. Treat that like the big deal it is. https://t.co/Xch64fV9Ws

Jacobs didn’t specify who the AJC had supposedly been soft on. But Rebecca Pierce, a black-Jewish filmmaker and writer, posted the AJC’s response after Rep. Ilhan Omar, D-Minn., falsely claimed earlier this year that the pro-Israel lobby AIPAC pays members of Congress to support the Jewish state. The AJC said Omar’s claim was “demonstrably false and stunningly anti-Semitic” and urged her to apologize.

Yonah Lieberman, the co-founder of IfNotNow, a Jewish group that opposes the Israeli occupation, criticized Greenblatt for starting his statement by praising the president’s remarks.

Meanwhile, Jewish Democratic groups were even harsher in their condemnations of the president. Halie Soifer, who leads the Jewish Democratic Council of America, called Trump’s comments “vile and bigoted,” while the Democratic Majority for Israel on Twitter called them “disgusting.”

Rep. Alexandria Ocasio-Cortez, the New York Democrat who has frequently sparred with the president, on Twitter termed his comments “outright and atrocious antisemitism.”

Matt Brooks, the executive director of the Republican Jewish Coalition, responding to an article about Jewish criticism of president, tweeted that “Jewish groups could be wrong.”

Shmuley Boteach, the prominent rabbi and author who launched a failed congressional bid as a Republican in 2012, said it was “highly misleading” to focus on Trump’s wealth remarks, calling the address “one of the most pro-Israel speeches ever delivered by an American President.”

Trump tells Jewish group they'll vote for him to protect their wealth – I was at the speech and live-streamed it. To sum this up as the headline is highly misleading. It was one of the most pro-Israel speeches ever delivered by an American President. https://t.co/Mk66W2aPpT