For some British Jews, elections feel like the walls are closing in 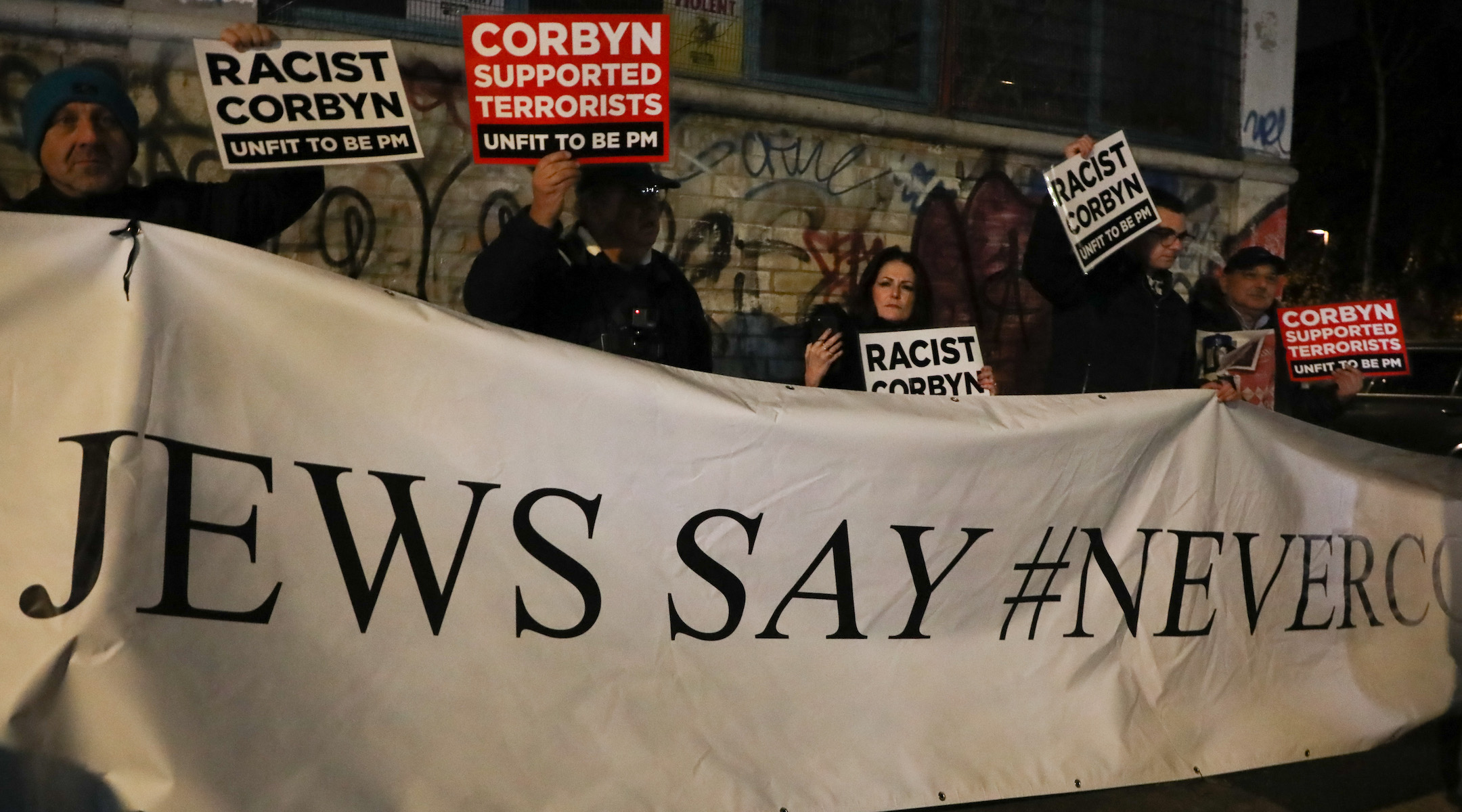 LONDON (JTA) — Linzi Pinto surveys a familiar urban landscape through her car windshield as she runs errands in north London. Very little has changed in her native city in her lifetime.

But on the eve of a fateful and close general election, Pinto feels like a foreigner here. Like many British Jews, she fears the vote may bring anti-Semites to power.

“Everything looks the same, but I don’t even recognize the country that I was brought up in,” said Pinto, a mother of two. “I’m pretty terrified, actually.”

The prospect of Labour Party leader Jeremy Corbyn becoming prime minister is chilling to British Jews. Following his election to lead the party in 2015, anti-Semitic incidents have proliferated in its ranks, with watchdog groups documenting thousands of incidents of hate speech.

Corbyn has dismissed allegations of complicity in this phenomenon, and has vowed to punish anyone caught engaging in it. But many of his Jewish critics perceive him as being part of the problem. A staunch supporter of Palestinian rights, Corbyn has endorsed a blanket boycott of Israel and called Hamas, whose charter calls for killing Jews, a group “bringing about peace and social justice.” He has called both Hamas and Hezbollah his “friends.”

Britain’s chief rabbi, Ephraim Mirvis, broke with precedent last month with an op-ed calling on Britons to not vote Labour. His predecessor, Jonathan Sacks, went even further and said that Corbyn is an anti-Semite.

Even if Corbyn doesn’t win, the anti-Semitism he is accused of unleashing in Labour, once the political home of British Jews, has “opened up a pandora’s box that means that reality has changed for us Jews,” Pinto said. She has advised her two college-aged daughters to leave, possibly for Israel, and build their lives there.

“Already today, some Jews have trouble working in some professions, studying at certain universities. And I don’t see it improving, only getting worse,” said Pinto.

David Collier, a Jewish 52-year-old Londoner who has exposed multiple anti-Semitism scandals in Labour on his political blog, Beyond the Great Divide, shares Pinto’s pessimistic view.

“Win or lose, and I think he will certainly lose, the hard-left has gained substantial ground,” Collier wrote on Facebook. “By creating unions with other hostile forces, [Labour] is now a major political threat to Jewish life in the United Kingdom.”

Collier’s daughter, he added, “decided to turn her back on the United Kingdom. Always intending to go to university here, [she] is enrolling in a lone soldier program next year” in Israel.

So far, immigration by British Jews to Israel has not seen a substantial increase. But that could change — not only because of Labour, but also because of its chief opponent.

The Conservative party under Boris Johnson has promised to forge ahead with pulling Britain out of the European Union, a move that would cast a shadow over the future of thousands of Jewish Europeans who came to live here because of growing anti-Semitism in their home countries.

One of them is a 43-year-old French mother who spoke to the Jewish Telegraphic Agency anonymously, citing potential negative career implications. Last week, her 6-year-old son came back from his Jewish school with a drawing he made of the British flag captioned with the Conservative slogan, “Get Brexit done.”

She smiled heartily and complimented the boy, who said he heard the slogan from schoolmates rather than faculty. But it “made my heart sink in fear, both from what happens to the community under someone like Corbyn, and what happens to our family under Johnson,” she said. “It’s like the walls are closing in.”

Adam Perry, a 47-year-old procurement specialist, recently obtained Portuguese citizenship based on his Sephardic Jewish roots, largely in reaction to the Conservative Party’s Brexit agenda, which he believes to be ruinous, dogmatic and rooted in what he calls a misguided imperialist sentiment.

But “realistically speaking, no one in this family is leaving anywhere,” Perry said. He and his Jewish wife have three children, all younger than 15, and they lead comfortable lives in Muswell Hill, an affluent and multicultural neighborhood of London.

Perry is a volunteer for Luciana Berger, a lawmaker who left Labour over the anti-Semitism issue and is now running for parliament as the representative of the centrist Liberal Democrats in the heavily Jewish constituency of Finchley and Golders Green. She is hugely popular among Jews here, but they make up only a fifth of the Conservative-held constituency, where her party clinched just seven percent of the vote in the 2017 election.

“I’m not terrified,” Perry said. “I think our kids will have a sheltered life in this neighborhood.”

His brother, Ashley, says that he’s “an outsider” in these elections because he moved to Israel 19 years ago. “Yeah, I’m an outsider too,” Adam quips with typical English irony.

Another Perry brother, who is haredi Orthodox, prayed in his synagogue on Wednesday for a Labour loss. They read from the Book of Psalms, a text used momentous occasions.

On the eve of the election, two of the Perry brothers put a hockey match on the living room television set as a diversion from the non-stop political coverage in the media.