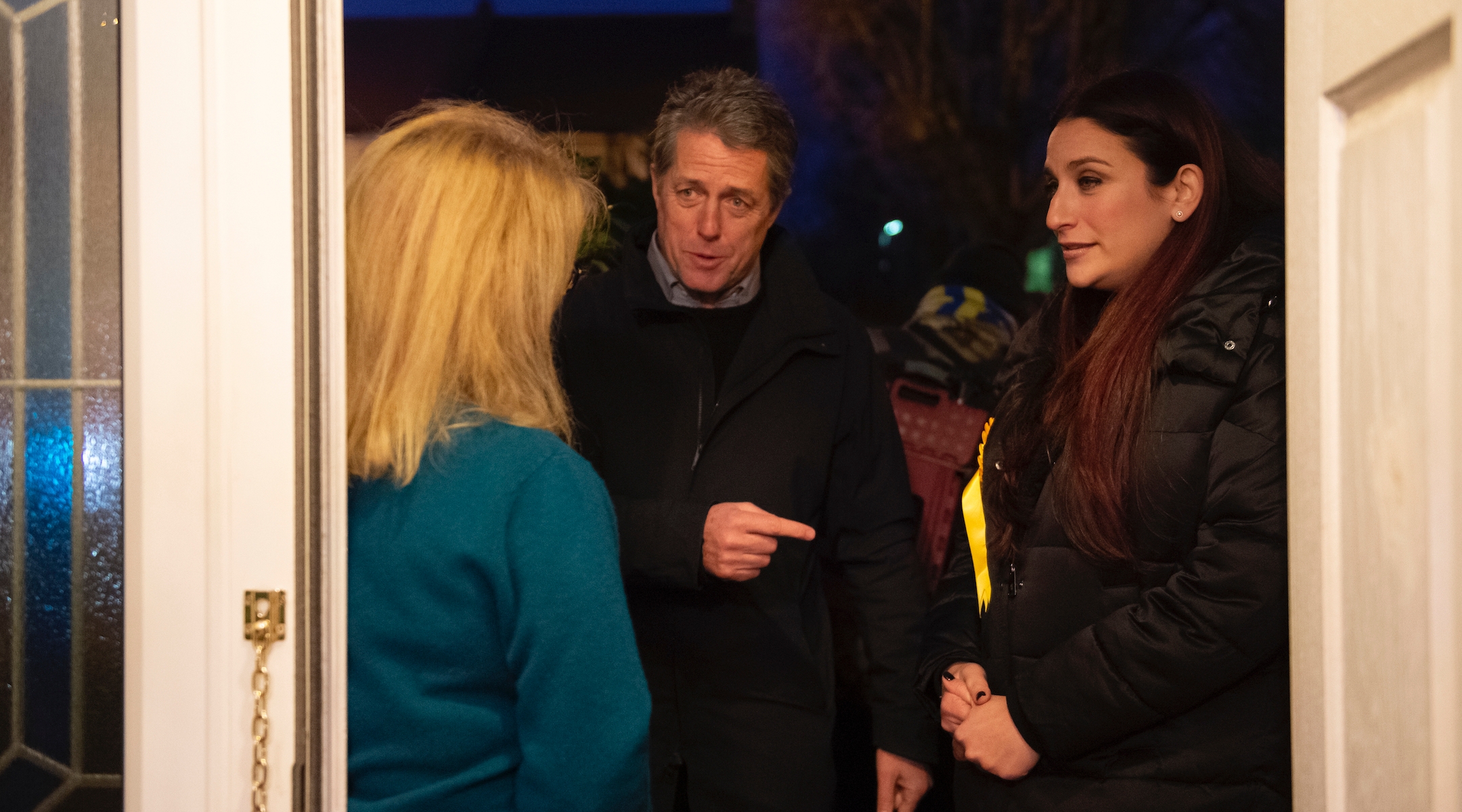 (JTA) — As the United Kingdom nears the final stretch of what is shaping up to be one of its most fateful general elections since World War II, all eyes are on the leaders of its two main parties: Prime Minister Boris Johnson of the Conservatives and Jeremy Corbyn of Labour.

Except, perhaps, the eyes of Hugh Grant fans in North London — at least on Sunday.

Dozens of residents of this heavily Jewish part of the British capital received a house visit from the 59-year-old British actor, who is known primarily for starring in an array of romantic comedies.

Grant was knocking on doors along with Luciana Berger, a Jewish politician who left Labour over its years-long anti-Semitism controversy and is running for Parliament on the ticket of the Liberal Democrats — a center-left party that strongly opposes Brexit. Polls project the party to fetch 10-15 percent of the vote, well behind Labour’s 35 percent and the Conservatives’ 42 percent.

“You may be wondering why I’m here. I wish I could tell you it’s because I’m a passionate Lib Dem. I’m not that, I’ve never been a supporter or member of any party,” Grant said at a town hall meeting in Finchley, an area of the London Borough of Barnet, which has more than 80 synagogues.

But he was compelled to hit the Liberal Democrats’ campaign trail ahead of the Dec. 12 elections because of its robust opposition to Brexit, Grant said in the meeting, which the Daily Mail reported on Sunday. Johnson’s Conservative Party is committed to getting Brexit done, with or without a trade deal with the European Union.

Labour, under its far-left leader Corbyn, has been noncommittal on the subject, which has divided its more centrist constituents.

The stakes are high for the United Kingdom, whose economy may suffer badly if it leaves the European Union’s common market without reaching a satisfactory deal.

Grant said he was impressed by Berger, who left Labour in February amid a campaign of harassment that was rife with anti-Semitic hate speech.

“I’ve admired her for some time,” Grant said of Berger at the town hall meeting. “I would say there are not many MPs in this day and age who would [leave] a majority of 29,000 in one constituency and come to a constituency which is quite marginal. I’m here to just say ‘Go Luciana!’ The country applauds you.”

Grant was referring to Berger’s decision in September to leave her constituency in Liverpool, where she was virtually guaranteed to win a seat on Labour’s ticket, and run for Parliament as the Liberal Democrat candidate in Finchley and Golders Green – perhaps the most heavily Jewish constituency in Britain.

Berger, 38, is something of a hero to many British Jews and a household name in community circles, but it’s still a gamble. Even in Finchley and Golders Green, Jews make up only a fifth of the voters, according to an article last week about Berger in the Financial Times.

Her new party performed there dismally in the 2017 elections, getting only 3,463 votes to 24,599 for the Conservative candidate and 22,942 for the Labour hopeful.

But staying in Labour was not an option for Berger, she told the PA news agency last week.

“I did everything within my power to try and change things: I had meetings, I put forward motions, I spoke out in the press when some very ugly things surfaced,” she said of the proliferation of anti-Semitic hate speech under Corbyn. “Not only did it not get any better, but it got worse and there has to come a moment when you say enough really is enough.”