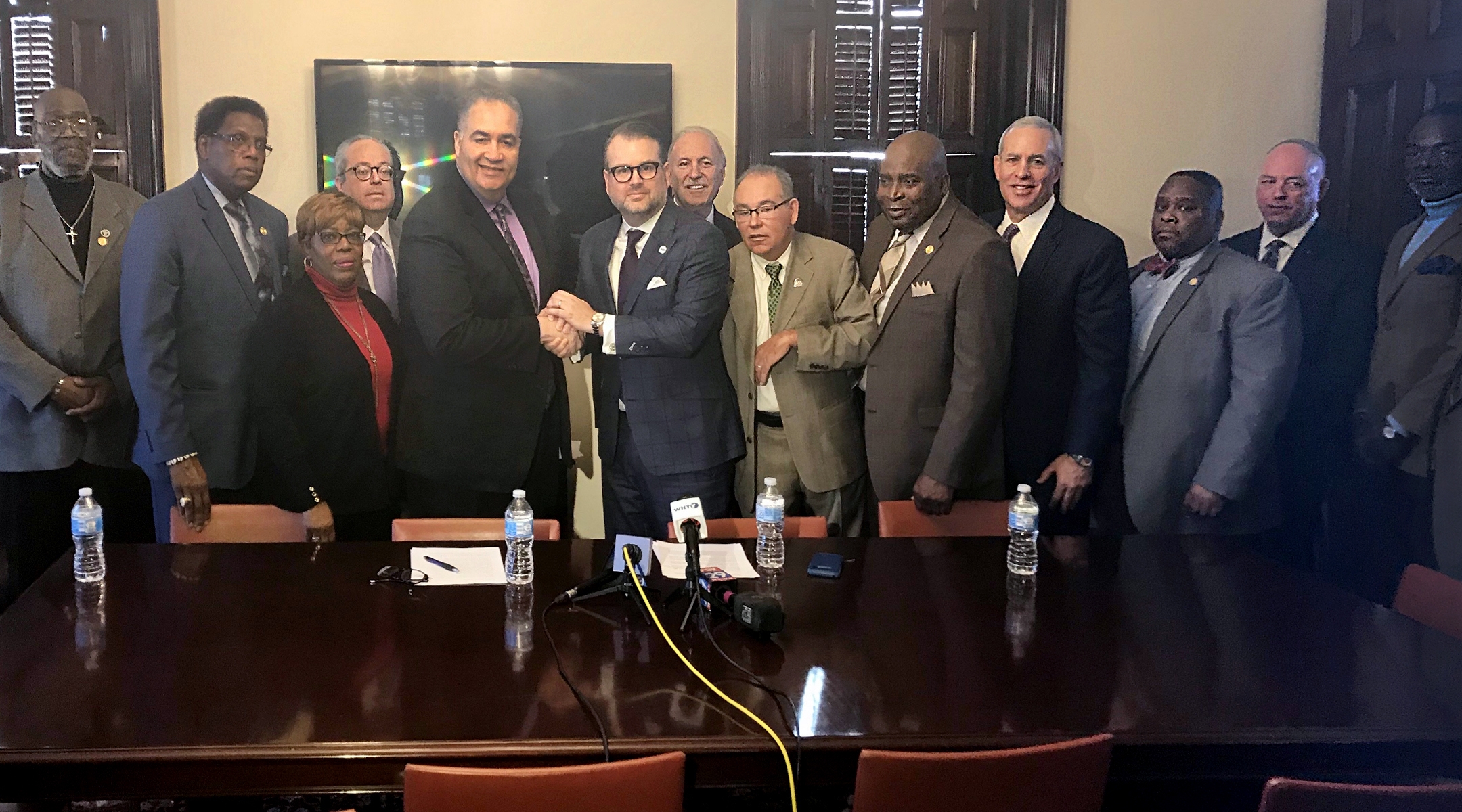 New Jersey leaders from the NAACP and ADL announcing a joint initiative to combat hate among public officials. (Courtesy of the ADL)
Advertisement

(JTA) — The most prominent anti-discrimination organizations in the African-American and Jewish communities are partnering to combat hate in New Jersey.

The Anti-Defamation League, which fights anti-Semitism and bigotry, and the NAACP, which fights racism and discrimination, announced the partnership Thursday. It comes about a month after a shooting in a kosher supermarket in Jersey City that killed four.

The neighborhood where the shooting took place, Greenville, is a largely African-American neighborhood with a growing Jewish community. One of the shooters, who also died in the attack, was once a member of the Black Hebrew Israelites, a movement with certain sects that the ADL defines as hate groups.

There have also been two recent stabbing attacks against Jews in Rockland County, which is adjacent to New Jersey. Overall, according to a press release,  both race-based and anti-Semitic hate crimes in New Jersey have more than doubled since 2016.

“The last few months have been some of the most difficult for the Jewish community in our region in recent memory,” Evan Bernstein, the ADL’s New York/New Jersey regional director, said in a statement. “We are hopeful and confident that our renewed partnership with NAACP will allow our communities to lock arms and stand together against bigotry and those who seek to distract and divide us from the critical work ahead.”

The New Jersey partnership between the ADL and NAACP has three prongs: collaborating to educate elected officials against hate, hosting a series of listening sessions with constituents of both groups and responding jointly to incidents of hate in the state. The groups have worked together in the past on civil rights, voting rights, criminal justice reform and related issues.

Following the Jersey City shooting, a local school board official, Joan Terrell-Paige, wrote a Facebook comment calling Jews “brutes” and expressing understanding for the shooters. Despite calls for her resignation from local politicians and New Jersey Gov. Phil Murphy, she has remained a member of the city Board of Education after receiving support from Greenville residents and other local officials.

“We stand with our Jewish brothers and sisters in strong condemnation of the acts of hate perpetuated against the Jewish community in our state and in the tri-state area over the last month,” Richard T. Smith, president of the NAACP New Jersey State Conference, said in a statement. “To the Jewish community in New Jersey I want you to know: the NAACP stands with you in this challenging time and in all times.”