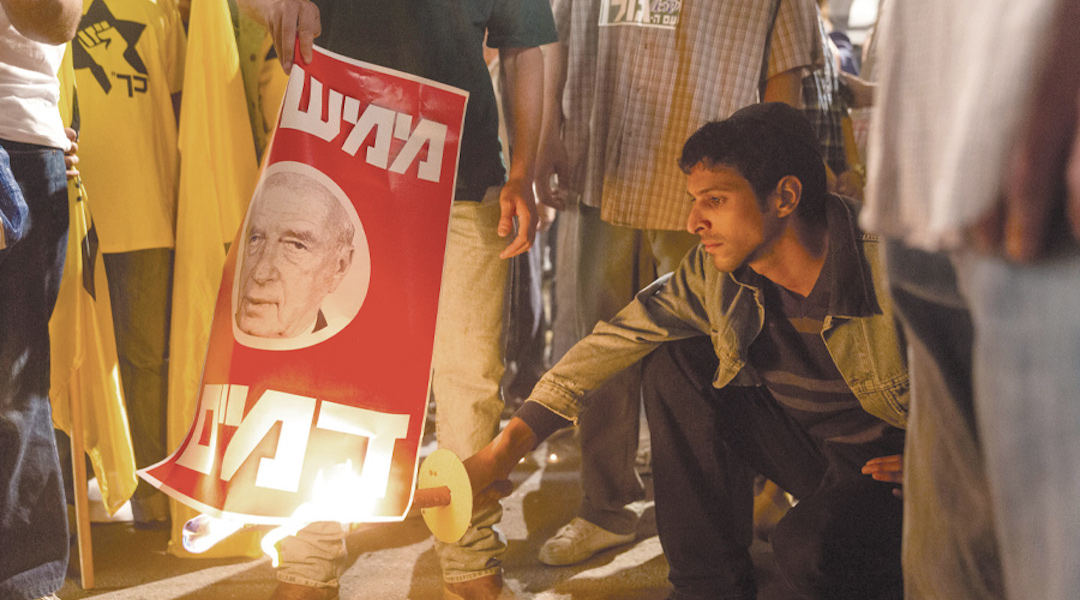 LOS ANGELES (JTA) – Over the past century, Jews have endured what filmmaker Yaron Zilberman calls a “trilogy of traumas”: the Holocaust, the Yom Kippur War and the assassination of Israeli Prime Minister Yitzhak Rabin.

The Israeli-American writer, director and producer has spent much of his career exploring these ordeals, and his latest film is no exception.

“Incitement” focuses on the 1995 shooting of Rabin in Tel Aviv and specifically on the man who pulled the trigger — Yigal Amir, the Orthodox child of Yemenite immigrants. It took Zilberman five years to research the path followed by Amir, from ambitious law student to murderer, and another year to put the film together.

“The assassination of Rabin is arguably the most traumatic event in the history of Israel,” Zilberman, 53, said in an interview. “The murder of a Jewish prime minister was impossible to comprehend, and the circumstances leading to it were not, at the time, investigated in full — perhaps to avoid a civil war.”

The sense of a nation on the precipice is vividly re-created in “Incitement,” which takes viewers back to the mid-1990s and powerfully dramatizes the deep fissures then opening up over the pursuit of a peace agreement with the Palestinians.

The signing that year of the Oslo II Accord promised to bring the country closer to a peaceful resolution to the conflict. But since the agreement called for the return of some of the land won by Israel during the Six-Day War in 1967, a determined opposition virulently fought against any concession.

As passions intensified, protesters displayed effigies of Rabin in Nazi uniform or as Yasser Arafat, chairman of the Palestine Liberation Organization. Rabin, a former general who had engineered the Israeli victory in the 1967 war, was called a traitor at increasingly vitriolic public demonstrations.

The film shows newsreel footage of Benjamin Netanyahu, then a rising young right-wing politician and now prime minister, encouraging the protesters at one such event — though not, he insisted later, advocating violence.

On Nov. 4, 1995, at 8:30 p.m. as Rabin left a peace rally in Tel Aviv, Amir emerged from the crowd and pumped two pistol shots into the prime minister. Rabin was rushed to a hospital, where he was pronounced dead.

Amir is portrayed by Yehuda Nahari Halevi, an actor whose family lived in the same Yemenite neighborhood as Amir and who dominates the screen throughout most of the film. Critics have applauded his performance, but some have observed that his powerful portrayal might elicit the sympathy of the audience, his horrible deed notwithstanding.

That criticism doesn’t surprise Zilberman, who co-wrote and directed the film. One reason it took so many years to make the movie was that Zilberman wanted to get into Amir’s mind and avoid portraying him as a unidimensional “monster.”

In Zilberman’s retelling, Amir’s road to perdition is paved with real or perceived personal slights and the misguidance of certain rabbis — and even of his own mother.

The former led Amir to conclude that Jewish law permits, and even encourages, the killing of traitors. Amir’s mother, in her short turn, drums it into her son’s head that he is super-smart and destined for greatness.

On top of all that, his longtime girlfriend Nava (Daniella Kertesz) breaks up with him, leading Amir to conclude that her Ashkenazi family opposed her relationship with a dark-skinned Yemenite.

Just about every review of the film draws a parallel between the popular mood in Israel in the 1990s and the one in the United States today. Variety writes that the film’s portrayal of a divided democracy, in which provocative language from politicians and the media lead to lethal violence, is hardly a relic of history.

“This plot summary sounds as if it could be ripped from recent U.S. headlines,” the magazine said.

Zilberman doesn’t dispute the parallels. Both Netanyahu and President Donald Trump are cut from the same political cloth and “play off the same book and incite their respective bases while frequently pretending that the victim in a given situation is really the criminal,” Zilberman said.

In Israel, the film is known by the punchier title “Yamim Noraim” — literally “Days of Awe,” the collective name for the holidays of Rosh Hashanah and Yom Kippur, a period of self-examination and judgment. “Incitement” was deemed the best motion picture of the year in Israel and became the country’s automatic entrant for the Academy Award for best foreign film, though it didn’t make the cut of the final 10.

Zilberman splits his time between New York and Tel Aviv. He is married to the film producer Tamar Sela and the couple have three children.

“Incitement” was co-written with Ron Leshem and Yair Hizmi. The film opens Jan. 31 in New York City and Feb. 7 in Los Angeles, to be followed by a rollout in other U.S. cities.