Josef Margaretten, the coordinator of Chaverim of Rockland, displays some of the emergency services agency's equipment. (Ben Sales)
Advertisement

MONSEY, N.Y. (JTA) — Eleven days after a man barged into a rabbi’s home on Hanukkah here and stabbed five Jews, Josef Margaretten was patrolling this Hasidic neighborhood in an SUV marked with police-like insignia and equipped with siren and radio looking for anything suspicious.

He held his phone to his left ear while his right hand gingerly gripped the steering wheel from below. Next to the gear shift was a switchboard that ran the kind of yellow lights you see on some official vehicles that might be police cars but aren’t. Stenciling on the windshield read “Safety patrol,” and a decal on the side read “911 emergency.”

It was a weekday in early January and Margaretten was explaining the concept of tefillin to a sanitation worker on the other end of the line.

“It’s the religious item that we use every morning to pray with,” he said. “It’s one of the most holy things that we have and it’s very respectful, especially it shouldn’t be in a garbage. Let’s say, unfortunately, if it’s [in] a fire and it gets burnt, this has to be buried with respect.”

Here’s the backstory: An adolescent in Monsey’s Orthodox Jewish community accidentally left his tefillin at a synagogue and it ended up in the garbage. So Margaretten called the waste management company and convinced them to stop the truck that had picked up the load and spill out its contents. Margaretten and a few other volunteers sifted through the trash until they found the tefillin. Now Margaretten was calling someone from the union to thank them for helping.

Margaretten is the coordinator of the Chaverim (Friends in Hebrew) of Rockland, an all-volunteer Orthodox Jewish emergency services organization in Rockland County that aims to provide an extra layer of security for the Hasidic community in this upstate suburb. Following two stabbing attacks against Jews in the county since November, its mission has become newly relevant. 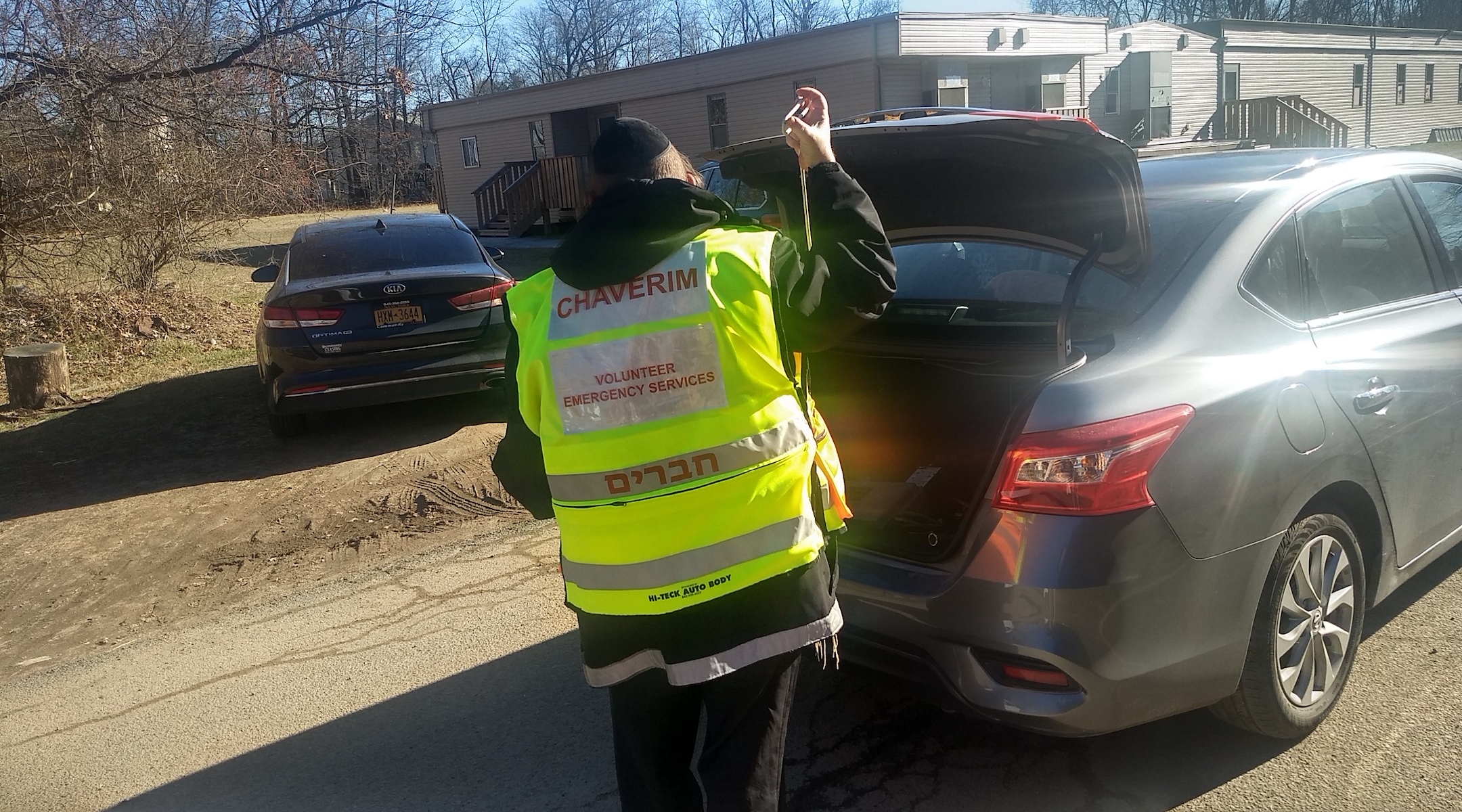 Calls to the group have tripled in recent weeks, Margaretten says. Chaverim is also distributing free emergency phones to area synagogues and other Jewish institutions. And its volunteers are driving past synagogues and schools more frequently to help the Jewish community feel safe. He said the group’s sense of alert has gone up.

“I’m nervous, but I’m afraid it shouldn’t happen again,” Margaretten said regarding the stabbings. “When it happened the first time, I thought, ‘That’s it, it happened once.’ When it happened again, you never know what’s going on. When there’s hate involved, we don’t know what to expect.”

Most of Chaverim’s work is quotidian: attending to flat tires, helping people deal with internet scams, finding lost objects, assisting the elderly. The group also helps with crowd control at Jewish events, and will translate and broadcast government announcements into Yiddish. Later in the day, Margaretten and another volunteer helped a woman who was locked out of her sedan outside a Jewish day school for girls. The group’s members generally do not carry guns.

The organization serves its largely Jewish clientele in two ways. First, many in the Hasidic community are reticent to interact with government authorities and prefer to register their concerns through a Jewish group. Also, many speak Yiddish as a first language, so Chaverim helps translate their complaints for the local police. Chaverim also educates the police about Jewish customs and holidays.

The work can be dramatic: Two weeks ago, a Chaverim member rescued a baby from a pit bull. And there was a Chaverim member who was present at the Hanukkah stabbing before the police arrived. Det. Sgt. Michael Higgins, a spokesman for the Ramapo Police Department, said that “policies have been established between ourselves and them that help us, more guidelines of what’s expected of both.” 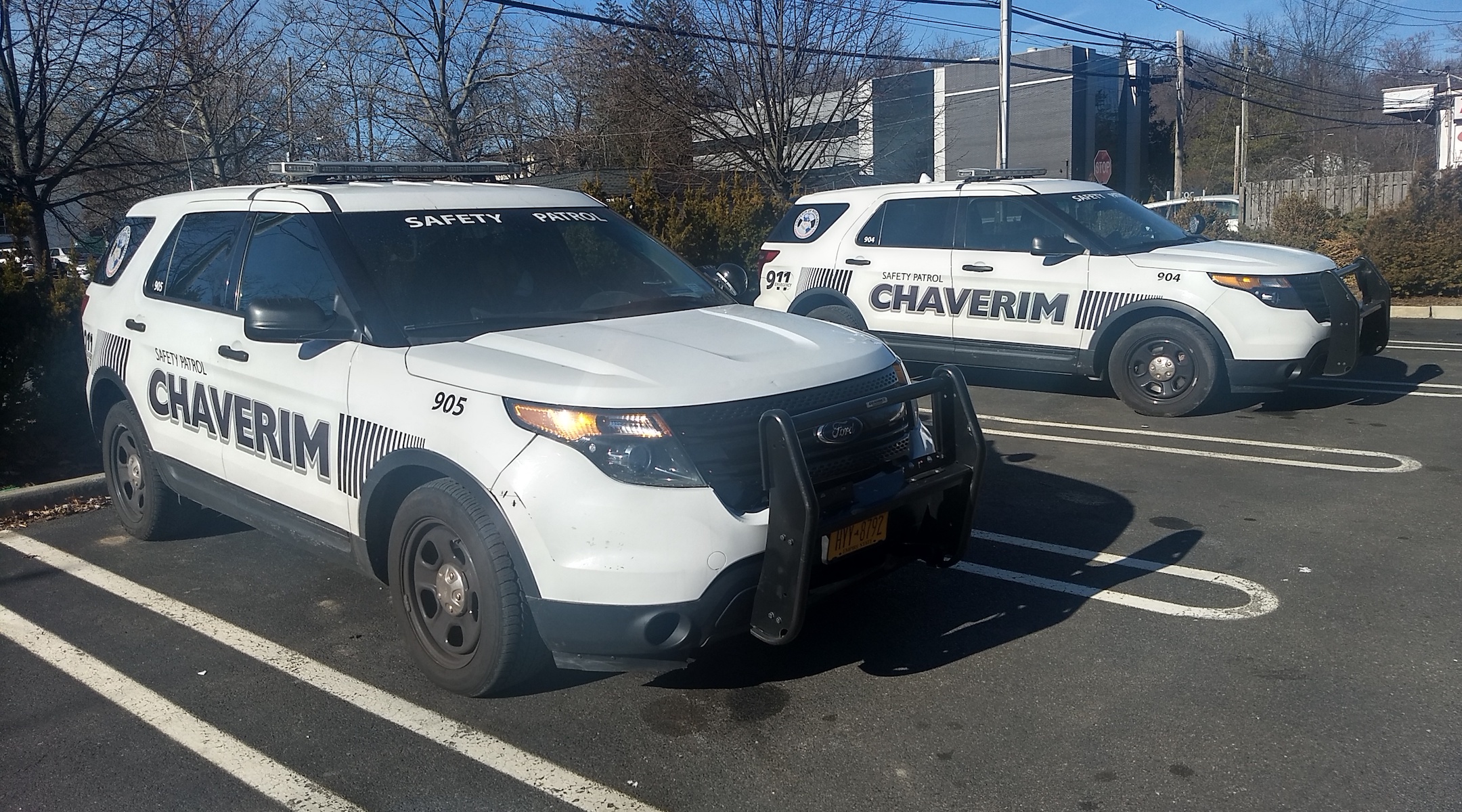 Founded 20 years ago, Chaverim currently has 120 volunteer patrollers and seven emergency vehicles. According to its 2017 tax filings, the most recent available, the group reported a budget of $240,000. Margaretten says this mostly comes from private donations, but he confirmed the group also receives funding from the Town of Ramapo. A more detailed tax filing in 2016 reported that the group was given $3,500 in government grants. Ramapo officials declined to comment on the matter.

The organization’s processes are a mix of informality and rigor. There’s no formal certification needed to be a member, but Margaretten does conduct an extensive background check before hiring volunteers — checking their criminal record as well as inquiring with local rabbis and communal institutions.

All of the members are men, and Margaretten says he prefers married men because they tend to be more stable and responsible. Once volunteers are accepted, they ride along with a veteran member for a month, learning how to pry open locks or run a generator before patrolling solo. Margaretten says he has 200 applications sitting on his desk waiting to be processed.

In 2019, the organization received 31,000 calls — an average of approximately 100 a day, not counting Shabbat and Jewish holidays, when Orthodox Jews don’t use the phone. On those days, Chaverim contracts with a security company that takes over its fleet of vehicles. Having the SUVs patrol on Shabbat, Margaretten says, deters potential attackers as well as possible car thieves who know that Orthodox Jews don’t drive on Shabbat.

Beyond that, he says the group looks out for people acting suspiciously around synagogues or Jewish schools. That could mean someone hanging around a synagogue for an extended period of time — most Jews visiting a synagogue will walk in for prayers and then leave — or circling the neighborhood in their car. 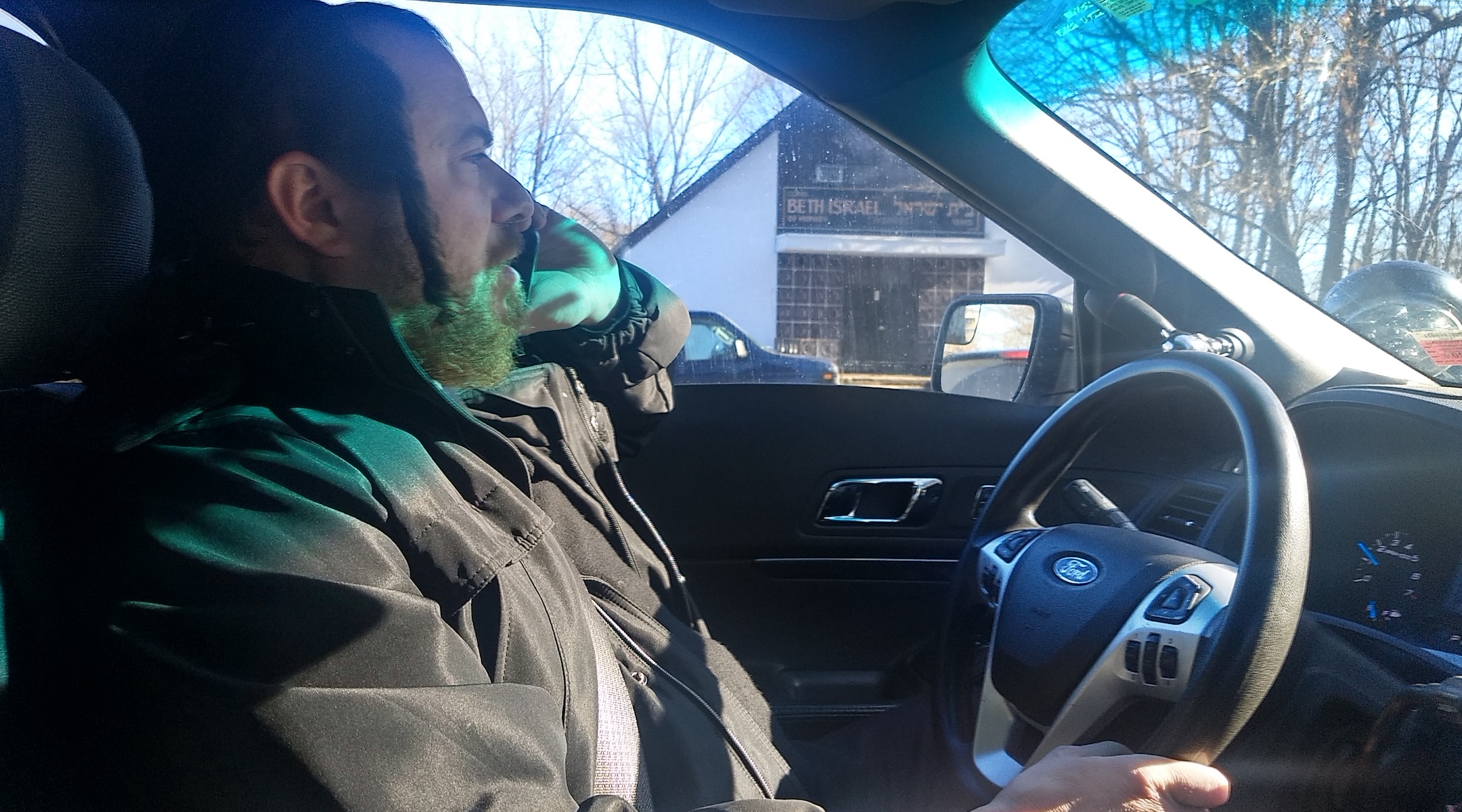 “Whatever you see that doesn’t belong there, or something,” Margaretten said. “Certain people don’t belong in certain places, you can see [are] suspicious. During the day, there’s not so much suspicious activity usually. At night, when you see a guy walking from house to house, pulling handles of cars, he is suspicious and you call the police department right away.”

Rockland County Executive Ed Day says Chaverim plays a positive role in the community, just like a volunteer fire or medical service. But police preferably would be doing much of Chaverim’s work.

“Ideally, you want to have sworn officers doing the job,” Day said. “What we have here is a collaborative effort in recognition of the force involved in policing. Where towns, villages decide that if we can blend our approach, we’ll be able to provide a better level of protection in terms of having eyes and ears out there.”