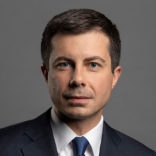 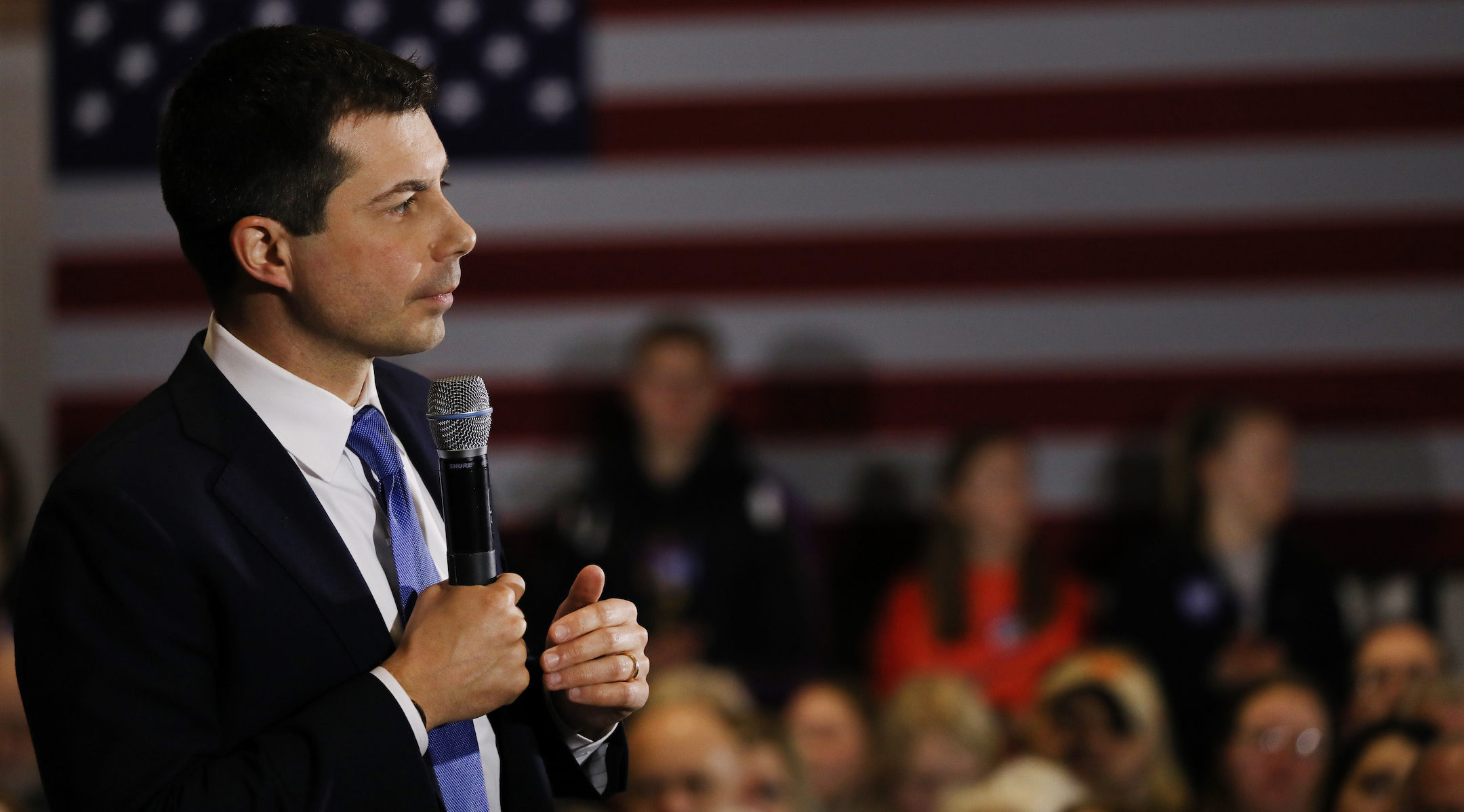 (JTA) — This is the second op-ed in a series of pieces about anti-Semitism and Jewish issues written by 2020 presidential candidates. This one is by Pete Buttigieg, 38, the former mayor of South Bend, Indiana.

I recently met with rabbis and other Jewish leaders in New York City to express my solidarity with the Jewish community following the recent anti-Semitic attacks there and to discuss how to combat rising anti-Semitism there and throughout our nation. What I heard most forcefully from the leaders with whom I met is the need for leadership that works to reduce fears rather than play to them. We have a president who exploits divisiveness for his own ends when we urgently need one who works to elevate discourse and heal divisions throughout our nation.

Using the presidency as a platform for making clear that anti-Semitism and other forms of bigotry and hatred have no place in our nation or, for that matter, throughout the world is absolutely crucial, but it is not sufficient. My administration will combat anti-Semitism using the full range of tools available to the federal government.

First, my administration will devote $1 billion to prevent and combat radicalization and violent extremism. We will empower law enforcement by increasing the FBI’s domestic counterterrorism field staff and pass federal legislation to expand our ability to track hate. Additionally, to combat the violent extremism that continues metastasizing online, we will dedicate federal funding for technology innovation and training to improve the software tools that track extremism.

Second, the central role of education in addressing anti-Semitism and bigotry must not be understated. Intolerance springs from ignorance, and an informed citizenry is a foundation of democracy. Holocaust education is a critical component of addressing anti-Semitism. I will support the Never Again Education Act, bipartisan legislation that would authorize new funding for teaching children about the Holocaust, and I will support legislative efforts to make sure that this dark chapter in history is part of the history that is taught in our schools.

Third, I will support increased funding for the Department of Homeland Security’s programs that increase the safety and security of our communities. This includes the Nonprofit Security Grants Program, which provides houses of worship and other nonprofit faith-based community institutions, including synagogues, temples, churches, mosques and Jewish community centers, with grants to improve their security.

Fourth, I will direct the Department of Justice to make prosecuting hate crimes a departmental priority. This includes actively investigating and prosecuting hate crimes in violation of federal laws, as well as supporting state and local hate crimes enforcement, as most violent crime is prosecuted at the state and local levels. I will support fully funding the landmark Matthew Shepard, James Byrd, Jr. Hate Crimes Prevention Act by providing the $5 million that the law authorizes for DOJ to provide “technical, forensic, prosecutorial or any other form of assistance” to state and local law officials in investigating and prosecuting hate crimes, as well as make grants for extraordinary expenses associated with the investigation or prosecution of a hate crime. And in addition to enforcing our hate crimes laws, we need to prevent them from occurring in the first place. I will direct the Justice Department’s Community Relations Service, which works to strengthen the ability of communities to prevent and solve conflicts, to prioritize its efforts to combat anti-Semitism and reduce tensions in communities where anti-Semitic incidents occur.

Finally, I will create an interagency task force that works on combating all forms of bigotry and hate, including rising anti-Semitism. This task force will coordinate and leverage the resources of the federal government to address anti-Semitism domestically. Anti-Semitism is not limited to the U.S., of course, so I will direct my administration to take steps to ensure that agencies throughout the federal government, including embassies and consulates, law enforcement officials who participate in providing training to their counterparts in other countries, and educational initiatives to identify how they can best combat anti-Semitism in their programs.

There is ample room for respectful disagreement and debate around the policies of the Israeli government, just as we encourage vigorous debate about policy of our U.S. government. I have not hesitated to express my disagreement with right-wing political figures in Israel to the extent that their statements and policies are inconsistent with longstanding U.S. policy and have undermined the prospects for achieving a two-state solution to the Israeli-Palestinian conflict, such as threats of annexation. Israel is an essential ally for America and, as I have said before, when we have disagreements, it is incumbent upon us to put our arm around our ally, as one would do with a friend, and offer wise and honest counsel.

At the same time, criticism of Israel that is expressed, for example, by invoking dangerous tropes and invidious stereotypes about Jews or by denying the Jewish people the right to self-determination are examples of criticism that crosses the line from legitimate criticism into anti-Semitism.

With respect to the Boycott, Divestment and Sanctions, movement against Israel, or BDS, I disagree with BDS as a strategy promoting a resolution to the conflict because it lays all of the blame at the feet of Israel and advocates for maximalist demands that push the prospects for peace further away. At the same time, efforts to counter BDS must respect the freedom of speech and expression that is protected by the First Amendment of the U.S. Constitution.

When I visited Israel with the American Jewish Committee, I saw on the ground the significant security threats Israel faces. I also recognize the toll of the status quo on Palestinians’ dignity and self-determination.

In my campaign I have often stressed the shared human value of freedom. Both Israeli and Palestinian citizens should be able to enjoy the freedom to go about their daily lives without fear, and to work to achieve economic well-being for their families. That is why I continue to believe a two-state solution that achieves legitimate Palestinian aspirations and meets Israel’s security needs remains the only viable way forward.

Neither side has yet stepped up to make the difficult compromises that are necessary to achieve an enduring peace. As Israel’s most powerful and most reliable ally, the United States has the opportunity to shape a more constructive path with the tough and honest guidance that friendship and fairness require.

Preserving the viability of a two-state solution for the future means speaking out when either side takes steps that would decrease its likelihood. The United States of America must be guided by an unwavering commitment to the values of peace and security.

As the mayor of South Bend, Indiana, I had the privilege of leading a wonderfully diverse community that includes South Bend’s strong Jewish community. As in many cities throughout the U.S., Jews who emigrated to America traveled to the cities and towns where they had relatives. South Bend was no exception, and the Jewish community there developed and has played a leading role in virtually every aspect of civic life. I have gotten to know our Jewish community well. There are multiple temples and synagogues, representing the different denominations throughout our city, including Temple Beth-El, which is just a few blocks from our home, and where Chasten and I have enjoyed attending Shabbat services. Close friends, supporters, colleagues and mentors who are Jewish have helped me to learn about the American Jewish experience and the richness of Jewish culture that adds so much to our communities and our country.

I was honored to participate in a Passover seder last year with a Jewish family in New Hampshire. In the course of the observance, I witnessed how it can draw families closer together, as well as be a source of community and tradition that links observers to others around the world, and to past and future generations. It was a moving experience that calls to mind many of the most meaningful elements of the practices in my own religious tradition, and opened my understanding to different ways of upholding faith, culture and values. 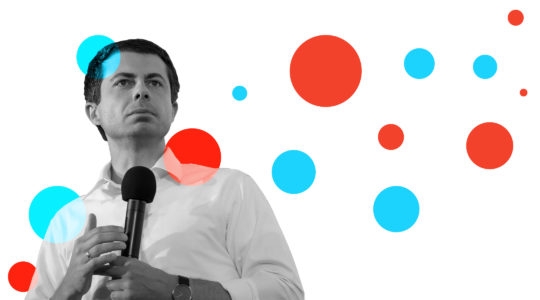 Where does Pete Buttigieg stand on anti-Semitism, Israel and other issues that matter to Jewish voters in 2020?