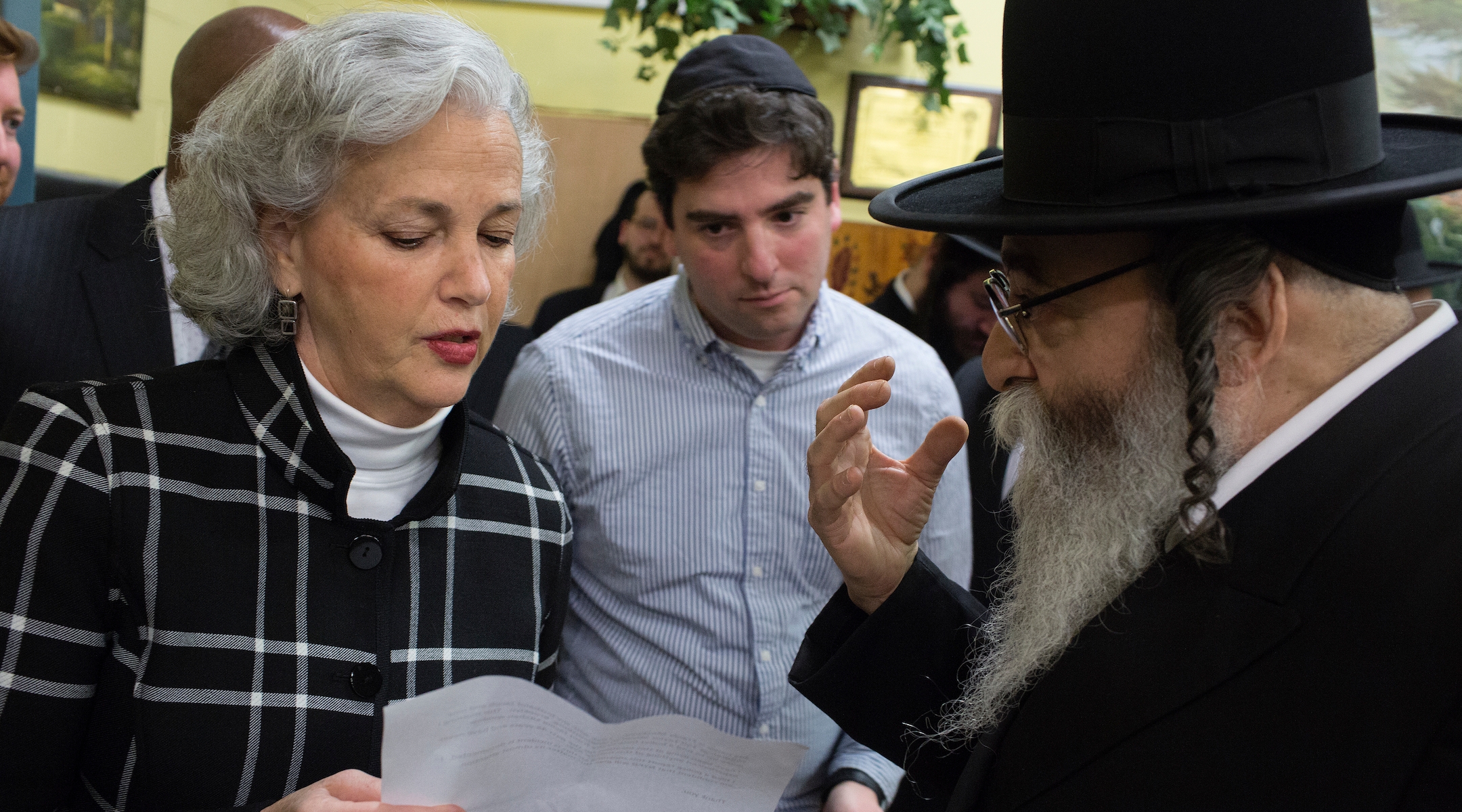 NEW YORK (JTA) — Earlier this month, Deborah Lauter stood in a Holocaust museum among students of color from a Brooklyn public school trying to explain why the museum is relevant to the current rise in anti-Semitism in their borough.

“The Holocaust didn’t happen in a vacuum,” Lauter told the students. “It started with egg throwing. It started with prejudice, discrimination. And what you’re going to see today is a genocide.”

In the months before the museum tour, New York had been plagued by a rise in attacks on Jews, from egg throwing to vandalism to harassment to assault.

In September, following a string of such attacks, Mayor Bill de Blasio appointed Lauter as the inaugural executive director of the Office for the Prevention of Hate Crimes. She came to the job following a career at the Anti-Defamation League and other Jewish groups.

Part of her job is to raise the alarm about anti-Semitism in America’s largest — and most Jewish — city. But at the same time, Lauter wants to dial down the panic. Yes, it’s rising. And yes, it’s bad. But is it Germany in 1933?

Not even close, Lauter says.

“What took me aback over these four months is the level of fear — I get it — but the level of rhetoric in framing what’s happening as a pogrom or Holocaust analogies,” she told the Jewish Telegraphic Agency in a phone interview earlier this month. “What we’ve seen is not state-sponsored anti-Semitism. Elected officials, law enforcement, the government, have absolutely been there for the community.”

So if it isn’t the Holocaust — even if it’s redolent of the run-up to it — what is it? Why is it happening? And what can stop it?

Those are questions that Jews in New York have been asking for months, especially as the attacks escalated from harassment to a deadly shooting in Jersey City across the river and a stabbing in upstate Monsey. And they are questions that Lauter must answer to succeed in her post.

Four months into the job, Lauter is focusing on the long game. While she supports the increased patrols by police and better hate crime reporting, her initiatives are centered on education and community relations. Preventing anti-Semitism in New York, she says, is going to require steps that could take years to come to fruition.

“The reactive piece is important,” she said. “But for me the preventative measures, through community relations and education, are really going to, I believe, change the tenor of the conversation.”

That approach has garnered a mix of reactions. Those who have met with Lauter praise her projects and eagerness. Rabbi David Niederman, a leader in the Hasidic community in Brooklyn, called Lauter “a real pro” whose ADL experience equips her to tackle the issue.

But in the face of an ongoing crisis, some critics want more immediate results. Others wonder whether an office with a budget of $1.7 million and a total staff of seven can make tangible progress. (Some programs Lauter is overseeing are funded with additional support from the city.)

“I don’t think she has the level of staff to deal with the demand of the issues we are facing, but so far so good,” said Pastor Gil Monrose, who does religious outreach for Brooklyn’s borough president. “They have been working diligently and working with partners. She needs more staff, and the staff that she has now is inadequate to take on the level of response that is needed in the city.”

Lauter says she has had 50 meetings with community stakeholders in Brooklyn and elsewhere since September, part of an effort to show the city’s commitment to tackling the problem. Niederman says it is starting to have an impact.

“It seems to us, because there’s a new chief in town, people are starting to get a little — a little — more ready to report hate crimes,” said Niederman, executive director of the United Jewish Organizations of Williamsburg. “Before, people were reluctant, [saying], ‘I’m not going to report it, nothing is going to happen.’ Now there is a watchdog, so to speak.”

Beyond that, Lauter’s passion is clearly directed at education and community dialogue. One project she stressed repeatedly was the formation of neighborhood safety coalitions, groups of religious leaders and local activists in the diverse and heavily Orthodox Jewish Brooklyn neighborhoods of Williamsburg, Crown Heights and Borough Park.

Lauter’s office is choosing coalition members based in part on past experience working with city government, and they are expected to begin meeting next month. After that, she expects the coalitions to transform from a top-down initiative to a grassroots-led salve for neighborhood tensions.ֿ

Lauter is vague about what the coalitions should actually do, preferring to let the groups figure it out for themselves. She did mention posting anti-hate messages in shop windows, and a news release last month announcing the coalitions suggested its members keep watch at dangerous street corners.

The office also is coordinating with 16 city agencies — from the police to mental health professionals — to work together on youth education, victim support and other issues.

Another project, which received $1 million from the city, provides funding to 16 nonprofits to support various initiatives to prevent hate violence. Three of the groups are Jewish — the ADL, Niederman’s organization and the Brooklyn Jewish Children’s Museum in Crown Heights. Other groups work with the LGBTQ community, ethnic minorities and immigrants.

Niederman plans to use the funding to encourage the reporting of hate crimes. The children’s museum is bringing in groups of public high-schoolers to learn about Judaism.

Lauter also is working on creating an anti-bias curriculum for schools to be launched in the next academic year.

“Kids are asking for this,” she said. “They want guidance, and I think there’s a willingness on educators’ part.”

Leaders in the Crown Heights Jewish community say they support Lauter’s focus on education and prevention, but some want her to focus more on the law enforcement piece as well.

Devorah Halberstam, an activist and Brooklyn Jewish Children’s Museum official whose son was killed in a 1994 terrorist attack on the Brooklyn Bridge, wants Lauter to work on ensuring that perpetrators are held accountable for hate crimes. Halberstam said that means greater transparency around hate crime data, ensuring perpetrators with mental illness receive mandatory treatment and denying plea deals to almost anyone accused of a hate crime.

“Are judges aware that they’re signing off on deals with someone who committed a hate crime with intent?” she asked. “This is not just a regular ordinary crime. This is very different. This is a message we need to send to people.”

Rabbi Eli Cohen, a Crown Heights activist who has spent decades teaching non-Jewish students about Judaism, said he wants Lauter’s office to concentrate on the crimes themselves.

“It would be good to figure out what is behind each of these individual incidents,” he said. “We’re all guessing, but we really don’t know. If she can use the resources she has available to find that out, everyone could be more able to find a solution.”

“[O]bsessing about all forms of hate is often counterproductive for young people,” he wrote in an email. “Instead we must teach young people, through our public schools, to appreciate the intrinsic goodness within other human beings, as all are created in the image of the Almighty.”

“If there is a target against one community, it very much affects all of us,” Naveed said. “We have to do it in a way that we’re advocating for every community and all communities.”

Lauter believes the spike in anti-Semitism is part of a broader atmosphere of hate nationally. So while her office is focused now on ending hate crimes against Jews, she expects to be turning her attention to other groups before long.

“Unfortunately, the lid has come off the sewer and there’s some normalization of hate in this country,” she said. “My focus in these four months has been on the ones motivated by anti-Semitism. I’m clearly very worried about what’s happening to the Muslim community, to the LGBTQ community, to the undocumented community — neighbors of ours who are still living in the shadows.”