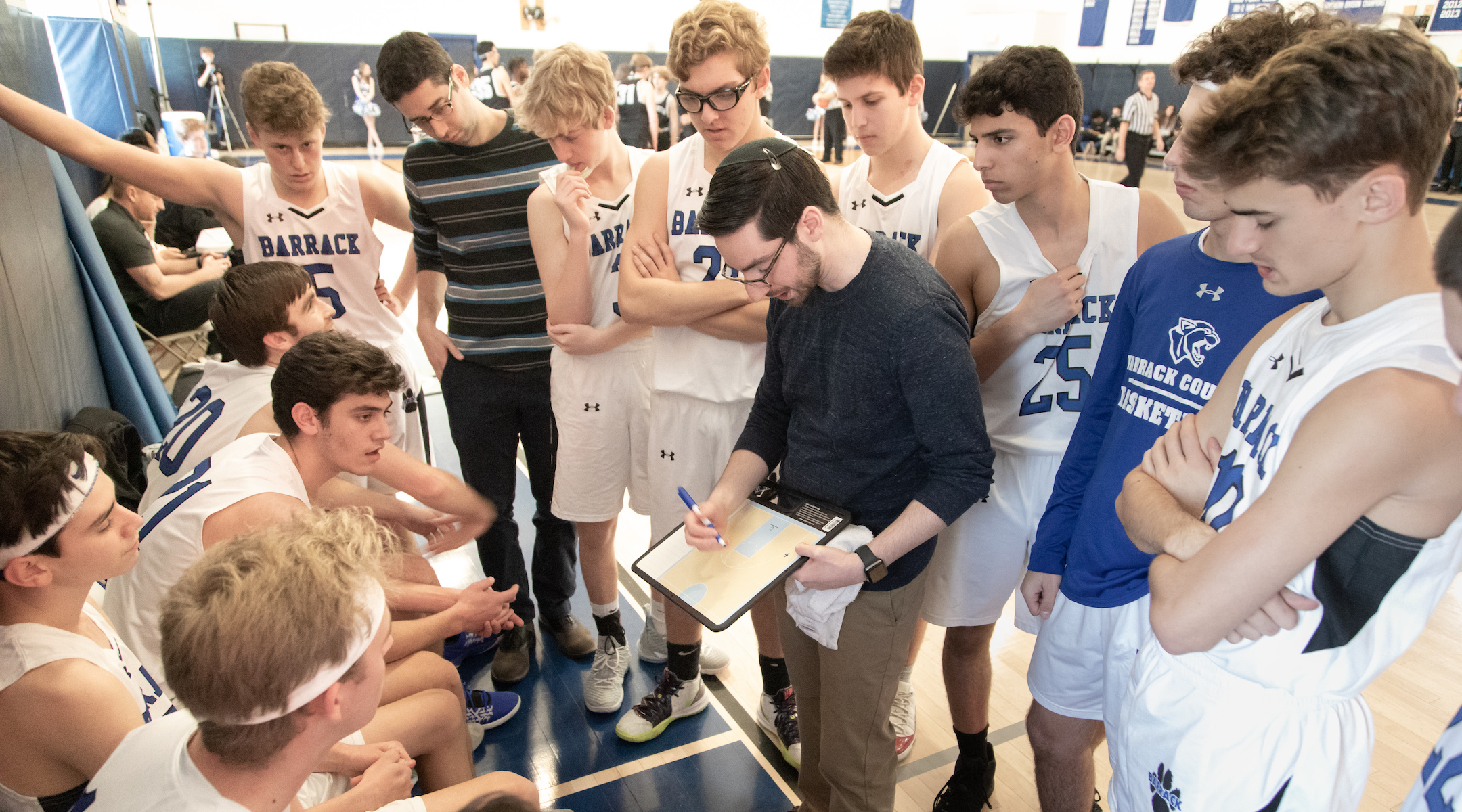 This week, he’s celebrating a championship on a slightly lower level — the Tri-County Independent School League — which he won as the coach of the Jack M. Barrack Hebrew Academy in Bryn Mawr, a Philly suburb.

It was the Jewish day school’s first championship in its non-Jewish regional league in more than two decades.

How Falk got here — transitioning from the NBA to a high school with about 400 students — is a uniquely Jewish story.

Falk, 31, developed a love for basketball statistics as a teenager at the Charles E. Smith Jewish Day School in Rockville, Maryland, and caught the attention of leaders in the burgeoning field through impressive statistical analyses that he posted online. The Portland Trail Blazers hired him for part-time work while he was still an undergraduate at the University of Maryland, then made him full time after he graduated.

He spent five years with the Blazers before being hired by the 76ers in 2014. There he became an integral part of what fans and commentators famously dubbed “The Process” — a slow rebuild of the Atlantic Division team’s roster that involved years of clearing house (or what critics decried as intentionally fielding a subpar team) in order to draft young top-level prospects.

After several rock-bottom losing seasons, 76ers general manager Sam Hinkie, who hired Falk, left the team in 2016. At the time of Hinkie’s departure, Falk was seen as a respected basketball numbers guru. Soon after, The Process began to bear fruit (by 2018, the 76ers made the second round of the playoffs).

But Falk had other ideas. He had always wanted to coach, and wasn’t qualified to do so at the NBA level.

He is also an Orthodox Jew, and the demanding NBA schedule often clashed with his Sabbath observance. The concept of coaching at a Jewish high school became an appealing option.

So he found an opportunity to volunteer as an assistant coach at Barrack during the 2016-17 season. He took over the basketball program in 2018-19 when the previous head coach got too busy with other endeavors.

Until 2007, the pluralistic Barrack school — none of Falk’s players wear kippahs — was named Akiba Academy. It boasts many famous alumni, including CNN news host Jake Tapper, best-selling author Mitch Albom and Chaim Bloom, the recently appointed chief baseball officer of the Boston Red Sox, who also got his start as an analytics expert.

Falk brought his NBA analytics mentality to the team right away, having his teenage players watch film of their games and practices to work on specifics. He trained them in which shots would yield a higher shooting percentage for their style of play. He also worked to eliminate injuries: Along with the team’s trainer, Falk incorporated mobility and strength workouts into daily practices.

This year, the efforts culminated in an 18-1 record and the victory over Renaissance Academy Charter School on Feb. 11 in the league championship game.

The job has given Falk an ideal work-life balance: He celebrated the birth of his first child during the past season (he says he wouldn’t have had as much time to devote to fatherhood if he still worked in the NBA) and also has been able to work on Cleaning the Glass, a site he created that provides NBA-level analytics on professional players to paid subscribers.

“It’s been incredibly gratifying. When I talk to former colleagues … they say in some ways it might be the best level of basketball, where there’s no media pressure, no one’s calling for your job when you have a disappointing season,” Falk said about high school sports. “But the kids still really love the game and they’re excited to play, and they’re competitive and they work hard.”

Next year, Barrack will play in a larger, tougher conference — the Tri-County Independent School League is folding. The school’s biggest rival, fellow Jewish school Kohelet Yeshiva, is in the league Barrack is joining, so Falk believes their games will get more intense.

He has emphasized to his players that they should not take the championship for granted.

“Sometimes in sports things work that way, where all the pieces fit together,” he said. “We had one of those years.”

And as for a return someday to the NBA?

“I’ve learned enough at this point in my life to know to never say never,” Falk said. “You never know what’s going to happen and how things are going to change.”