4 years ago Michigan made Bernie Sanders. Now it might break him. 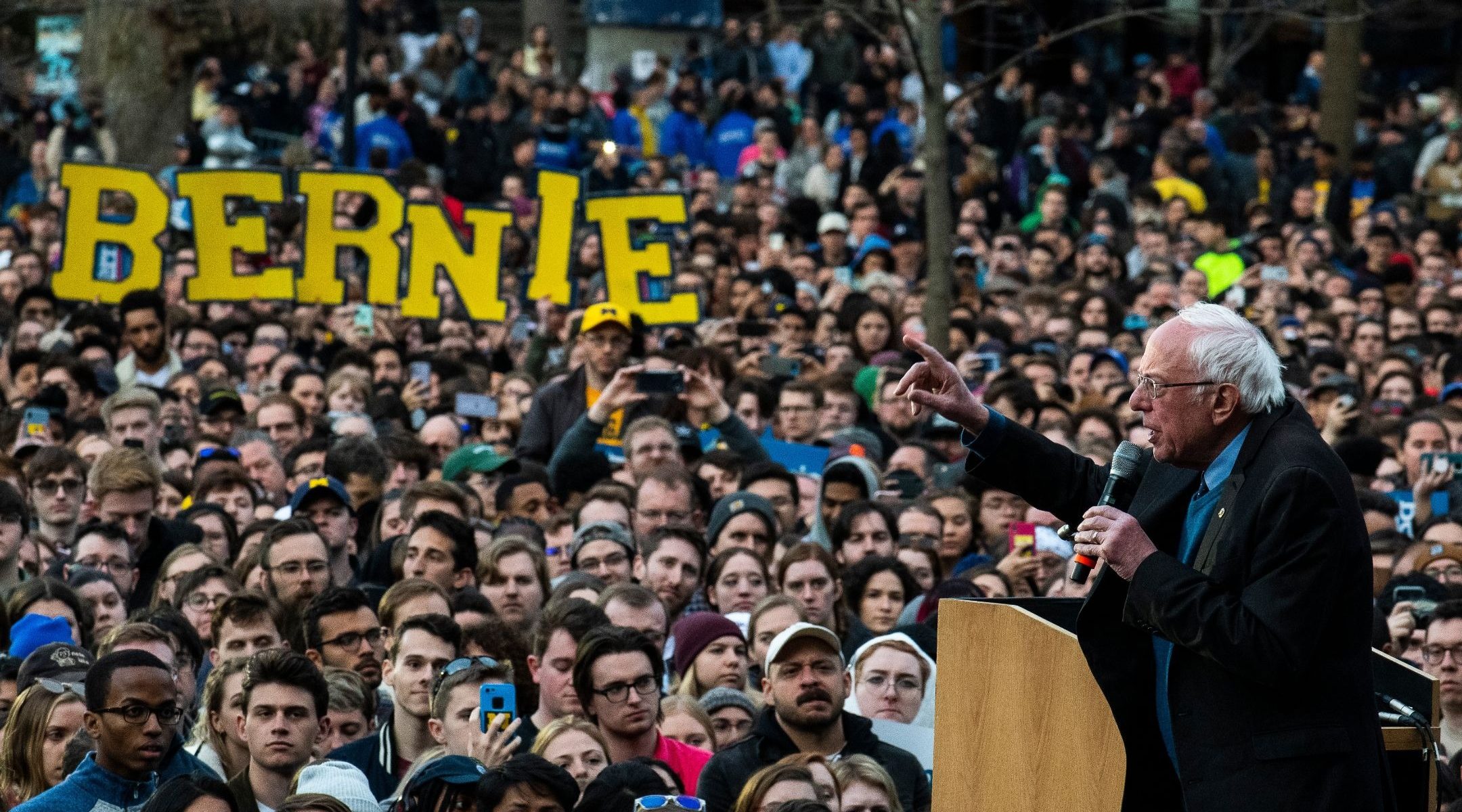 WASHINGTON (JTA) — If Bernie Sanders made history in 2016 when he won the New Hampshire Democratic primary, becoming the first Jewish candidate to win a major party nominating contest, Michigan was where he graduated from footnote to chapter in the history books.

The Vermont senator’s victory in Michigan during the 2016 primary made him a threat to what had seemed to be the inevitability of Hillary Clinton’s nomination. It was when Sanders stopped being the no-chance candidate who was in the race to nudge the party to the left and instead became a viable candidate.

From that moment onward, one could realistically imagine a democratic socialist and a Jew as president.

Sanders eventually fell short against Clinton, who would lose the presidency to Donald Trump. But the promise that Michigan brought on March 8, 2016, fueled the Sanders run for 2020.

Only this time, Michigan appears poised to put a major dent in his White House run.

In what now has essentially become a two-horse race, polls show Joe Biden leading by double digits in the state primary being held Tuesday. That vote may be the last chance for Sanders to recover after Biden’s stunning comeback a week ago on Super Tuesday, when the former vice president won 10 of 14 states, including Texas in a major upset.

Sanders has canceled planned appearances in other states with primaries on Tuesday to focus on Michigan, where his support among the state’s large Arab-American and Muslim population could be a possible bulwark against the Biden ascendance.

What are Michigan’s Jewish voters thinking? We asked several of them for their take on what’s changed between 2016 and today.

For one thing, Donald Trump was elected

Moderate voters were likelier to stay home in 2016 precisely because Clinton seemed inevitable in both the primary and the general election. At least that’s the theory of Noah Arbit, who founded the Michigan Democratic Jewish Caucus.

“Hillary was leading the polls in the primaries in Michigan by such a wide margin,” Arbit said.

So some of her backers decided to stay home, while others registered for the Republican primary to vote for Trump because at that point he seemed to be the least electable among GOP candidates.

Sanders ended up wining Michigan in 2016 by 1.4 percentage points.

Trump’s presidency has changed the calculus, Arbit said, and moderate voters are likelier to vote for the candidate they believe is best positioned to beat him. That’s Biden, said Arbit, who personally favors the former vice president.

This time around, he said, Democrats are “only focused on this question of electability.”

Clare Kinberg of Ann Arbor, who edits the monthly Washtenaw Jewish News, said the determination to oust Trump was a key factor among the Jewish voters she knows.

“It’s not exactly panic but close,” said Kinberg, adding that she thinks Biden is going to win because the conventional wisdom says he is more electable. Still, she said, “I’m going to vote for Bernie … because I want to register that preference within the party.”

Marianne Adler Aaron said she was voting Biden even though her outlook aligns more with Sanders.

“I know that my five grandchildren of voting age all are enthusiastic about Bernie, but although I agree with him about his vision for America, I’m not sure that he could beat Trump and that’s our primary goal in this election!” she said in an email.

Biden’s got better game than Clinton

Clinton is widely seen as having taken Michigan for granted. Biden has not, campaigning hard in the state and garnering an endorsement from the popular governor, Gretchen Whitmer, and key members of its congressional delegation. John Kerry, the former U.S. secretary of state, appeared over the weekend at a Jewish Biden event in Detroit’s suburbs.

Biden’s prospects improved after every other moderate dropped out following his Super Tuesday wins and endorsed him, said Halie Soifer, the director of the Jewish Democratic Council of America and an East Lansing native.

“Going into Super Tuesday there was a division” among moderates, she said. “We saw a lot of support for [former New York Mayor Mike] Bloomberg and other candidates. A lot of the Bloomberg supporters are now behind Biden.”

Also key was Biden’s strong campaign among the state’s African-Americans, a key demographic that Sanders is also courting, Soifer said. Black voters tend to favor the moderate in Democratic primaries, and have turned out in droves to support Biden specifically.

Democrats voting are as likely to consider the effect of the top of the ticket on congressional races as much as whom they would prefer for the presidency. Two freshman Democratic congresswoman in Michigan — Elissa Slotkin, who is Jewish, and Haley Stevens — flipped Republican districts in 2018 and are now endorsing Biden, in part because they see him as the better candidate to get their own voters to the polls.

(Andy Levin, another Jewish Democratic congressman in the state, endorsed Massachusetts Sen. Elizabeth Warren, but has been silent since she dropped out last week.)

Moreover, Sen. Gary Peters, a Democrat, is seen as vulnerable in his re-election bid. Peters, like Slotkin and Stevens, is a moderate, and sustaining that approach could be prominent in the thoughts of Democrats heading to the polls, Arbit said.

“Whoever wins the presidential race in Michigan will also win our Senate race, and that’s a big concern,” he said. “We need a candidate who will not step on the messaging.”

A number of Michigan’s Jewish leaders have said in the past that they are unnerved by the party’s left wing, particularly Rep. Rashida Tlaib, a Detroit-area freshman congresswoman who has questioned whether Israel should exist as a Jewish state and backs the movement to boycott Israel. Tlaib, a Palestinian American, has endorsed Sanders and campaigned for him.

That relationship is one of several ways that the differences between Sanders and Biden are sharp when it comes to Israel, one issue important to Jewish voters. Sanders advocates for conditioning aid to Israel based on its compliance with U.S. goals, while Biden rejects that path in favor of leaving the U.S.-Israel relationship unchanged.

This month, Biden addressed the American Israel Public Affairs Committee annual conference, while Sanders boycotted it, calling it a platform for bigotry.

The student vote is less certain

Sanders’ win in 2016 was spurred in part by younger voters. Both of the state’s major universities have midterm breaks that ended Monday. Especially given the coronavirus epidemic, some students might not make it back in time to vote.

“It’s less clear that that will occur, the young vote on college campuses,” Soifer said. “That definitely matters.”