The Jewish case for a President Bernie Sanders 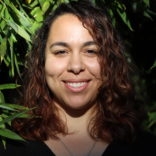 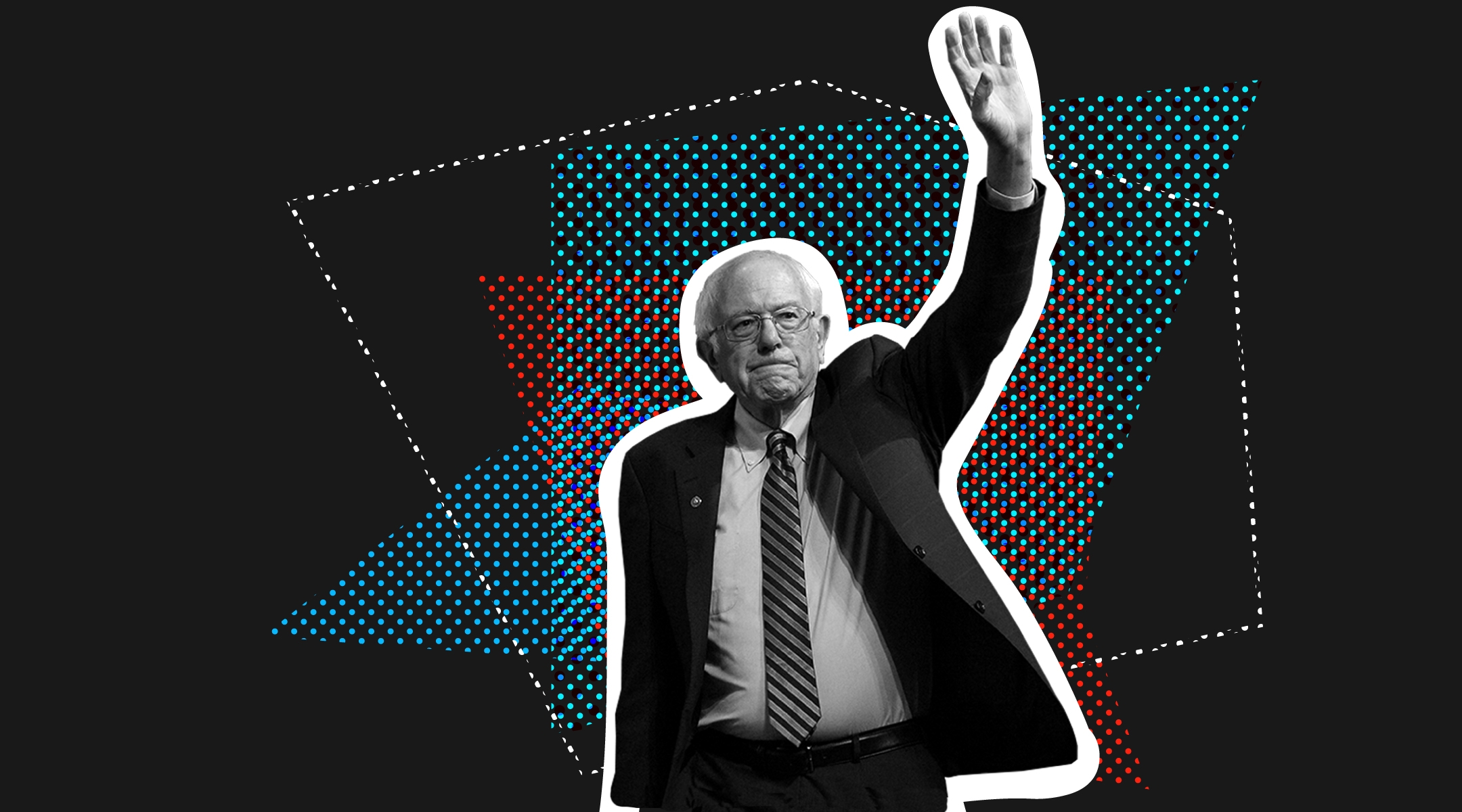 (JTA) — Last Thursday, a white supremacist blogger known for targeting Muslims was kicked out of a Bernie Sanders rally in Arizona after waving a Nazi flag behind the Jewish democratic candidate.

The flag was quickly torn out of his hand by Sanders supporters, and Sanders was unaware of what happened until after the event, saying, “Obviously, it is unspeakable. It is disgusting… I got to tell you, I never expected in my life, as an American, to see a swastika at a major political rally. It’s horrible.”

The incident speaks to the stakes of the 2020 election, and the Sanders campaign in particular, in which everyday people espousing progressive ideals of equality and social justice are seeking to end a Trump presidency characterized by white nationalist cruelty and corporate greed.

Throughout his campaign, Sanders has been increasingly outspoken about the relationship between his Jewish identity and his current struggle to unseat President Trump, connecting his experiences of losing family to the Holocaust and growing up in a community full of survivors to his understanding of “how horrible people can be to each other in the name of racial superiority.”

These comments reflect a common thread in Jewish social action from today’s Jewish anti-Trump organizers to the Civil Rights solidarity of Abraham Joshua Heschel, in which Jewish identity and experience of the past become a catalyst for fighting for a shared future side by side with other oppressed people.

Such values have informed Sanders’ entire political career, in which he opposed the Iraq War, fought to protect social security, advocated environmental protection and refused to be beholden to the corporate interests that have destroyed American working communities. While he’s often branded a radical, many Americans, including many U.S. Jews, support these policies on paper even if they don’t personally subscribe to his democratic socialist ideology.

But it’s also precisely his ability to connect popular policies like Medicare for All, the Green New Deal, student loan forgiveness and ending the war on drugs into a singular vision for this country that makes him such a powerful challenger to Trump and such a threat to white nationalism. And repeated polls have shown Bernie beating Trump in a head to head match up, including among Jewish voters.

Part of what makes Sanders so effective against Trump is that rather than seeking a return to the broken status quo that produced him, Bernie recognizes him as the symptom of a systematic problem that can be fixed by addressing the demands of everyday people. Accordingly, Sanders has looked to today’s popular social movements to inform his platform and build a coalition that reflects community needs and not corporate interests.

While some Jewish voters may still be skeptical of him as a candidate, Jewish organizers have played a central role in the movements informing his platform from day one.

One of the most pressing humanitarian issues of the Trump presidency has been the border and immigration crisis, which has included family separations and mass detention of migrants, and now efforts to denaturalize documented immigrants as well. Remembering how anti-immigrant sentiment has historically been tied to systematic anti-Semitism, from the Holocaust victims turned away by the U.S. to today’s white nationalism, young Jews alongside venerable Jewish institutions like HIAS have been on the front lines with Latinx, Black, Asian, and other communities fighting back.

Under Trump, Jews have played a bloody price for such values. White nationalists like the Tree of Life shooter have cited Jewish immigration work and Soros conspiracy theories as reasons for anti-Semitic violence. Thursday’s incident in Arizona was a stark reminder of what’s at stake in this moment.

Like many Jews, Sanders ties his support for immigration justice with his own father’s story of coming to the United States as a teenager, and he knows personally that the fight against white nationalist anti-Semitism is a key racial justice issue. In addition to taking on Trump’s anti-Semitism  directly and promoting gun reform, his platform includes halting the Trump deportation machine, ending family separation, and protecting and expanding DACA, while developing a just immigration system and foreign policy that addresses the root causes forcing people to flee their homes in the first place.

This same Jewish-infused racial justice outlook fuels Sander’s support for prisoners rights, abolishing the death penalty and private prisons, and rolling back the War on Drugs. He has also committed to reversing the Muslim ban and fighting Islamophobia and other forms of hate, while promoting a more amicable and just relationship between the U.S. and the rest of the world. This longtime focus on racial justice has earned him endorsements from frontline groups like the Dream Defenders who organized around the death of Travyon Martin and helped end felony disenfranchisement in Florida last year, restoring the vote to over a million formerly incarcerated people.

In refusing to back down when it comes to the fight for universal healthcare over the years, Bernie Sanders made Medicare for All a front and center issue in the democratic primary, and the policy enjoys widespread support from many Americans, including the Religious Action Center of Reform Judaism.

As Trump incompetence exacerbates a global pandemic, making the cost of denying healthcare and labor rights to working people in this country increasingly clear, Sanders’ unwavering support for Medicare for all also sets him apart, alongside his refusal to be beholden to big pharma and insurance companies rallying around rival Joe Biden.

With the endorsement of the youth-led Sunrise Movement, Sanders stands out in the democratic field when it comes to fighting climate change and ensuring a livable planet for future generations. Sanders won big in California on Super Tuesday, a state where we know firsthand the cost of Trump’s climate denialism and incompetence in response to climate disasters, like the 2018 wildfire, which killed at least 85 people and prompted the president to threaten to cut federal funding due to erroneous claims that poor forest management was to blame.

The Green New Deal has received support from Jewish environmentalists, and Sanders’ support for indigenous pipeline protests and their refusal to accept oil money lets voters know that as he fights climate change he will not be beholden to those profiting from and causing it.

While some Jewish voters may be concerned about Sanders’ criticism of Israel, which falls pretty squarely into a Liberal Zionist framework, it’s important to understand it as part of his broader anti-war foreign policy. Sanders rightly opposed the Iraq war at a time when this was a controversial and career threatening stance, and he has sharply criticized despotic U.S. allies like Saudi Arabia.

As Trump paves the way for the annexation of settlements and threatening to further destabilize the Middle East by instigating conflict with Iran, we need a candidate whose foreign policy is built on pursuing peace and justice for all, even when we find that challenging. And while many Jewish voters may not share his critique of Israel or AIPAC, he represents a growing share of our community, especially among young people, who see the only path to peace as one of justice.

Ultimately what ties all of these policies together is Sanders’ belief in social and economic justice for all. It’s why he is also a leader when it comes to labor rights, housing, and education equality. Far from being an ideological lone wolf, Sanders’ platform has been consistently influenced by the partners he is accountable to, and every position he holds is shaped by his relationships with the communities demanding them.

Come November, it will not be enough for the democratic candidate to simply be “not Trump.” In order to engage voters for the turnout necessary to defeat him, we have to offer an alternative vision to white nationalist hate that reflects the needs of those failed by this system.

Bernie Sanders’ vision is not only in line with Jewish ideals of social justice, it reflects the bonds that connect us to the rest of the world and the heartfelt understanding that we will never be free until we fight together.

Click here to read the Jewish case for a President Joe Biden.

Click here to read the Jewish Telegraphic Agency candidate guide on where Bernie Sanders stands on anti-Semitism, Israel and other issues that matter to Jewish voters in 2020

Rebecca Pierce
is a Black and Jewish filmmaker and writer from the San Francisco Bay Area.
The views and opinions expressed in this article are those of the author and do not necessarily reflect the views of JTA or its parent company, 70 Faces Media. 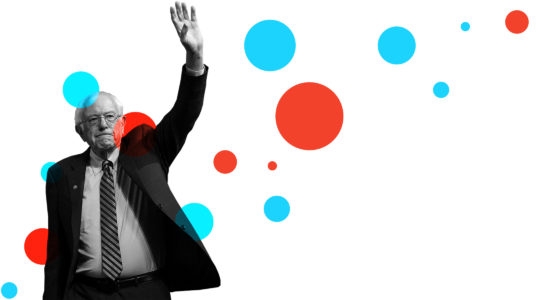