(JTA) – Yeshiva University men’s basketball coach Elliot Steinmetz has been comparing the abrupt end to his team’s season, brought on by the rapidly spreading coronavirus, to the ending of the TV series “The Sopranos.” The much talked-about finale of that show ends by cutting to black.

“It was just like a weird blank screen,” Steinmetz said. “There was no sting of defeat, there was no glory of victory, it was just kind of this, like, blank screen, and an emptiness — wondering what could have been.”

The team’s success had been something of a surprise. The New York City institution is better known as the flagship university of Modern Orthodoxy than an athletic powerhouse, and its basketball team had made it to the tournament — the championship for the third tier of college basketball, for schools that do not provide athletic scholarships — only once, in 2018. It lost in the first round.

Amid their historic season, Steinmetz and his players were optimistic. But even at the start of the tournament, the effects of the coronavirus on sporting events and other large gatherings already were being felt. The squad played its two tournament games in front of no fans.

Not long after the Maccabees had advanced to the third round — the Sweet 16, named for the number of teams left in the pool — the rest of the tournament was canceled.

“It’s just emptiness. It felt like a story that just didn’t end,” sophomore guard Ryan Turell said on the phone from California, where he is now taking online classes. “Wasn’t a great feeling.”

The team was on the bus heading south to Virginia to play its next game, against Randolph-Macon College, when players and coaches received the news. Randolph-Macon was seeded higher than Yeshiva in the tournament but the Macs, as they are nicknamed, were confident they could have continued their historic run.

“We liked our chances, we were out there competing for a reason,” Steinmetz said. “We weren’t comfortable with where we were and we thought we had a good chance to really take it further.”

The coronavirus has wreaked havoc on sports schedules around the world and cut short seasons for any number of teams — but the Yeshiva players had a special and uniquely Jewish story brewing.

“Traditionally speaking, people think that Jews can’t play basketball,” Turell said. “To be able to combat that with great basketball is a really great feeling.”

The team actually lost the first game of its season, against Occidental College in Los Angeles, but won less than 24 hours later against Cal Tech. From there, the Macs went on to beat several teams that have routinely bested them over the years, including Williams College in Massachusetts — its roster this year included a 6-foot-10 player, something not too common in the Division III ranks — and New Jersey City University, consistently one of the better Division III teams in the region. 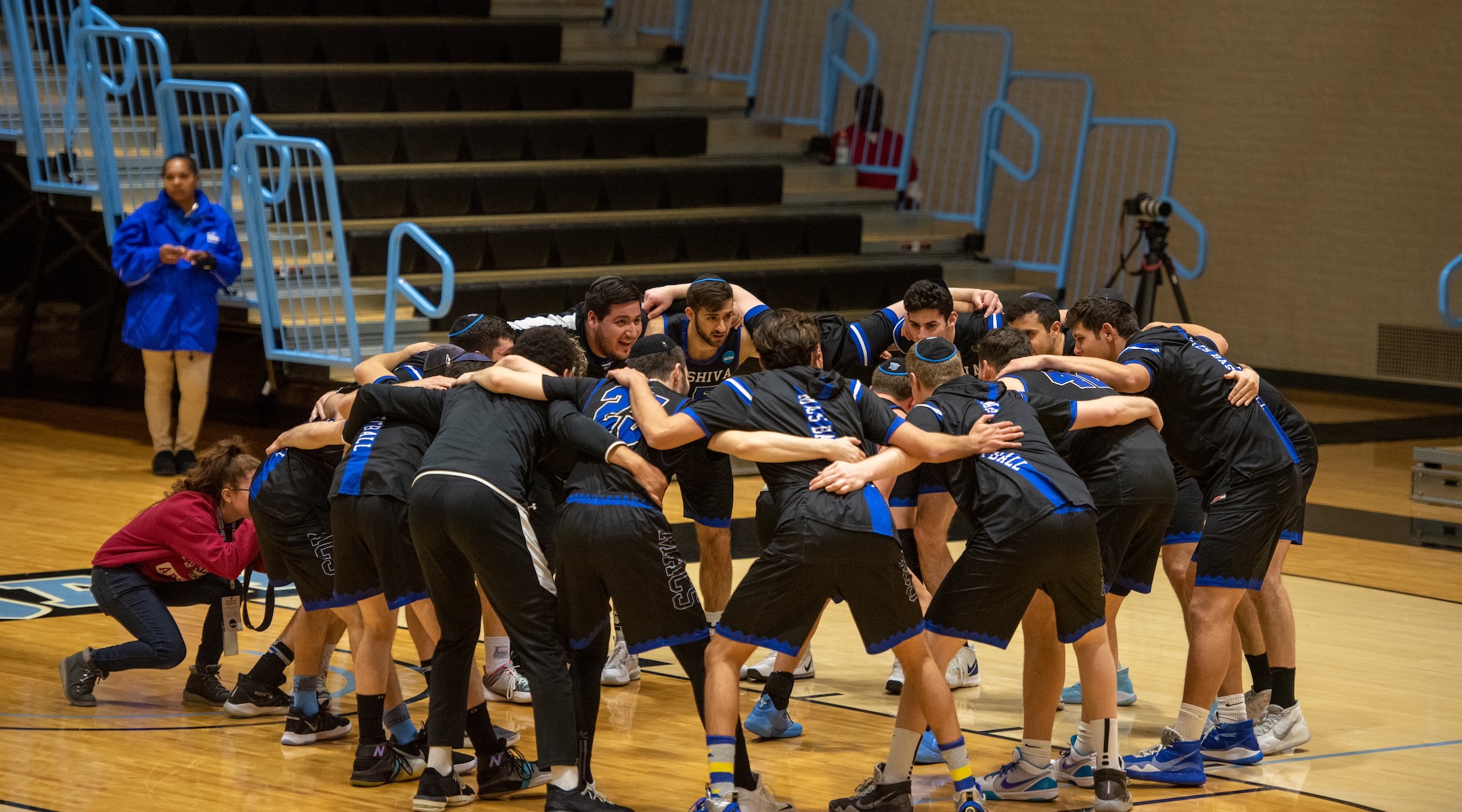 The team is a product of six years of recruiting by Steinmetz, a 39-year-old real estate lawyer from Long Island who played for the Macs in his college days. When not studying his and other teams on film, or keeping up his growing law practice (the coaching job is a part-time gig), he attends Jewish high school tournaments throughout the year to scout Jewish basketball talent.

The longtime Knicks fan no longer has any time to watch the NBA.

“You could coach the hell out of your X’s and O’s, but if you don’t have players who can run it and who are smart enough to do it, you’re not going to get wins,” Steinmetz said. “It was a priority for me … to use connections in the Jewish basketball world to try to attract some of these kids.”

Several of his players — such as Turell, Gabe Leifer, Dani Katz and Simcha Halpert, a graduating guard who plans to try out to play professionally in Israel this summer, assuming the coronavirus pandemic abates — might have gone to Division I programs but likely would not have played much.

Turell made first team All-America and Leifer was on the fourth team — the first players in school history to be recognized among the best in the country. Steinmetz was chosen as the national Coach of the Year.

His pitch to recruits: Come be a star at Y.U., where you can also make a name for Jews in sports.

“I’m the first person in my family to leave L.A. for school,” Halpert said. “He really sold me on the dream of Jewish basketball.”

Turell bought into the bigger goals, too.

“We feel like we’re representing not just Yeshiva University but the Jewish people overall,” Turell said. “We’ve got fans watching us not only all over the country but all over the world. … To have that kind of support is amazing.” 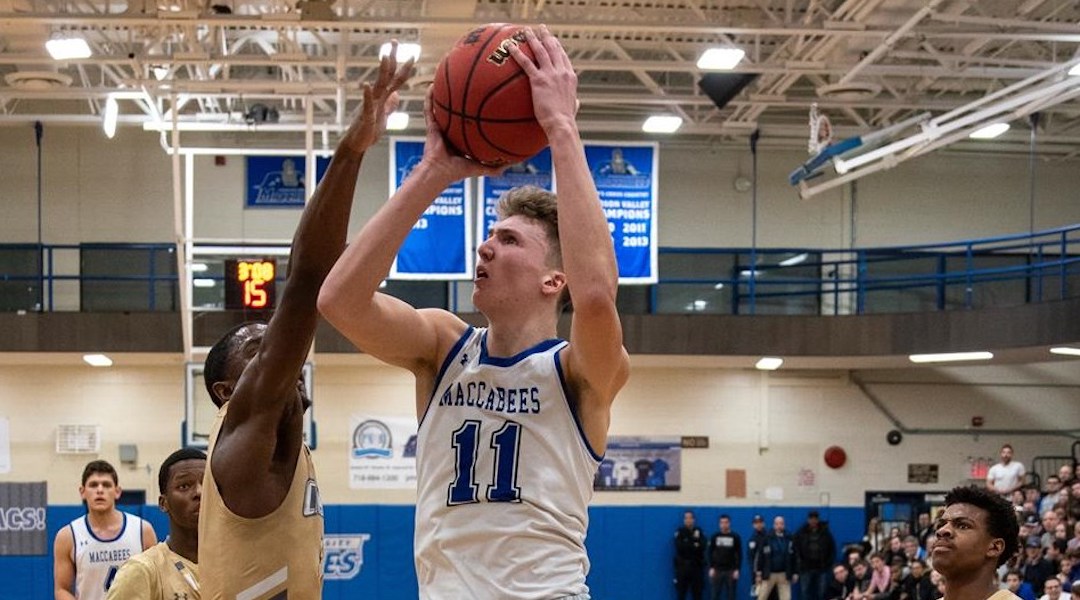 It all helped the team build a robust base of Jewish fans not used to seeing Jews dominate at basketball.

“You have kids that are asking our guys for autographs and pictures, which is not something you usually see at the Division III level,” Steinmetz said.

Steinmetz said his squad received nothing but respect from opposing players and coaches this year, but added that he has heard inappropriate and anti-Semitic comments from some fans in the past. Turell said he has seen fans — some he believes have never really interacted with Jews, even in the New York area — say things like “I like your hat!” to teammates, referring to the yarmulkes worn by players.

“We embrace being different. Most of us have been doing it our whole lives,” Halpert said, also from home in Los Angeles. “Anytime I go to an LA Fitness, I’m always wearing my yarmulke, and my favorite thing is when they call me ‘Jew boy’ … I know I can play with anybody.”

Later he said, “I’m trying to change their philosophy on Jews. Throughout their lives they have one idea what Jews are, then I play with them, or the Y.U. team plays with them, and their whole opinion about Jews changes.”

But it’s hard for the players to avoid thinking of how far they could have gone in the tournament, especially now that they are stuck at home.

Turell, who is trying to focus on next year and planning to gain 20 pounds of muscle in the offseason, said he thinks the Macs had a shot at winning the entire thing.

“It’s just a weird place to be in,” Halpert said.