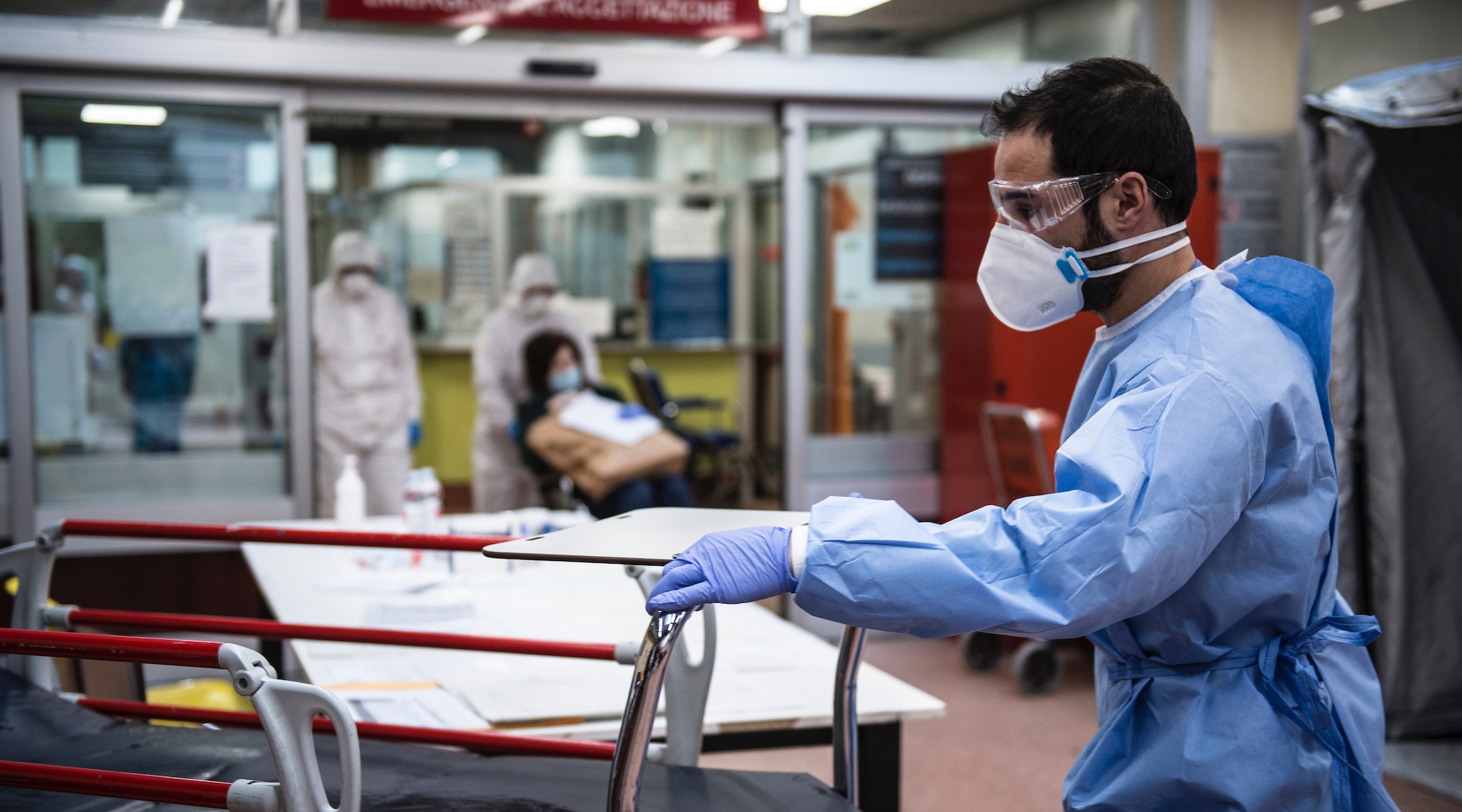 (JTA) — At least twice a day, Micol Naccache breaks down in tears over what the coronavirus is doing to her city of Milan and its Jewish community.

A high school teacher and mother of two, Naccache describes herself as “an optimistic person.” But she is struggling to stay positive following the death of one of her friends from the disease, whose outbreak in Milan earlier this month forced all of Italy into a lockdown that has been in force now for three weeks.

“I smell death around me, it’s the first time something like this has happened to me,” said Naccache, 48, who begins each day by disinfecting her entire home with alcohol spray, partly for protection and partly as a distraction. “It’s like in a war, where you walk on and people are dying around you. I don’t see them dying but I can feel it, death all around me.”

More than 7,500 people have died in Italy of COVID-19, the largest death toll of any country. Some 800 people are dying each day of a disease that has overwhelmed local health services.

Isolated and worried, thousands of Italian Jews have turned to their communal media and institutions for a lifeline and sense of solidarity.

One of the victims last week was Giorgio Sinigaglia, a friend of Naccache and fellow member of the Jewish Community of Milan. Sinigaglia was a 54-year-old engineer and father of four. The week before that, the virus claimed Michele Sciama, a former leader of the community.

The pandemic has killed at least five Jewish people in Milan, and all of them have been buried at the Jewish cemetery, said Alfonso Arbib, the community’s rabbi. Their bodies have not been prepared in accordance with Jewish religious laws, or tahara, which involves washing the corpse, among other rituals.

“It’s not safe,” Arbib said, “and preserving life is the most important thing right now.”

Several others from the community have died in recent days, he said, though it’s not immediately known if their passing was due to COVID-19. Arbib also said that among several others who have contracted the virus, some are fighting for their lives.

Last week, images of army trucks bringing bodies to be cremated in the northern city of Bergamo stunned Italy. Arbib said the scenes were particularly shocking for Jewish Italians, whose faith forbids cremation.

“So far, we’ve been able to prevent this because burials are still allowed under certain conditions, but it is a concern that this would no longer be possible if the death toll keeps climbing,” he said. 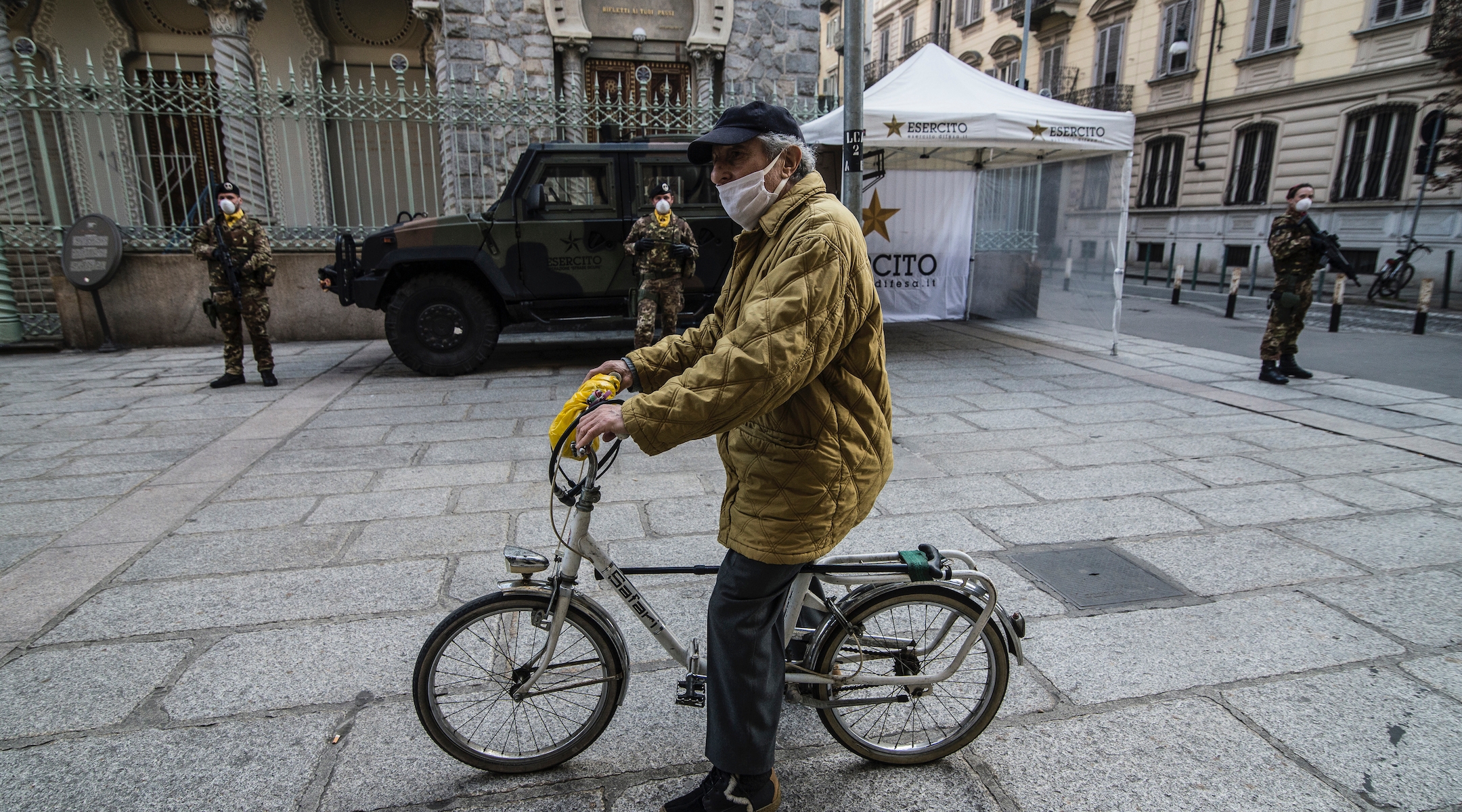 A cyclist protecting himself from the coronavirus passes in front of a synagogue in Turin, March 18, 2020. (Stefano Guidi/Getty Images)

Funerals are limited events these days, with only 10 mourners from the immediate family allowed to attend. The customs of sitting shiva and nichum avelim – Judaism’s seven days of mourning at the deceased’s home and visits there during the period by relatives, friends and acquaintances – have been made impossible because of the country’s lockdown.

“Losing a loved one without saying goodbye is really painful,” Stefania Sciama, the daughter of the former community leader of Milan, told The Times of Israel in an interview published Thursday. “My father died alone and now I can’t even comfort my mother.”

Her mother, Viviane, is alone at her home and keeps in contact with other relatives through video chats.

The prospect of sharing Sciama’s fate is terrifying Liliana Segre, 89. She’s a Jewish senator from Milan and a Holocaust survivor.

“I have to tell the truth, the thing that scares me the most is to die alone,” she told Moked, the Jewish-Italian news service, on Tuesday.  “I have already seen those who died alone, but I didn’t think I, too, would be on the frontline.”

Milo Hasbani, the president of the Jewish Community of Milan, a nonprofit representing most of the city’s Jewish institutions, is feeling “powerless to help the people I’m responsible to help, and it’s a very difficult feeling,” he told the Jewish Telegraphic Agency.

“There is actually little I can do in practical terms when I can’t leave my house. It’s very tough.”

The community in Milan did manage to organize an assistance service for the elderly who were left alone, including the delivery of groceries and medicines to their homes. It also has harnessed video chat and streaming platforms to preserve a sense of togetherness.

Arbib gives daily lessons on the Torah over Facebook to dozens of viewers. Each time one of his congregation members dies, he dedicates the following lesson to the deceased and delivers an obituary as his followers add their own words in text comments.

The Milan community’s website, Mosaico, has published an obituary about each person it has lost to the disease and invited readers to add their own words in the comments. The one about Sinigaglia, the engineer, has received about 200 comments, including by close friends recalling moments they shared with him. Encouragements and condolences have been sent to his widow and children.

“I’m not a fan of Facebook and internet communication, I’m more of an old-school guy, especially when it comes to offering condolences,” Hasbani said, “but now we have nowhere but the internet to come together to mourn. So that’s what you’re seeing.”

At a “difficult moment of social isolation and solitude,” the website is geared toward facilitating “emotional closeness and sharing of pain,” said Fiona Diwan, the editor in chief of the website and Milan’s Jewish monthly, Bet Magazine.

”When hugs, sociability and the possibility of burying one’s loved one are missing, only the written words remain,” she said.

Naccache, the teacher, tunes in to lessons by a rabbi and author from Rome, Benedetto Carucci Viterbi.

“He gives beautiful lessons that really resonate with me and give me power to go on,” she said.

Her children, aged 8 and 10, attend Milan’s Jewish school, La Scuola Ebraica, which has 500 students. Like most other schools in Italy, it has switched to remote studying, but “it’s very difficult for students to concentrate,” said Naccache, who also teaches law and economics remotely at a different school. 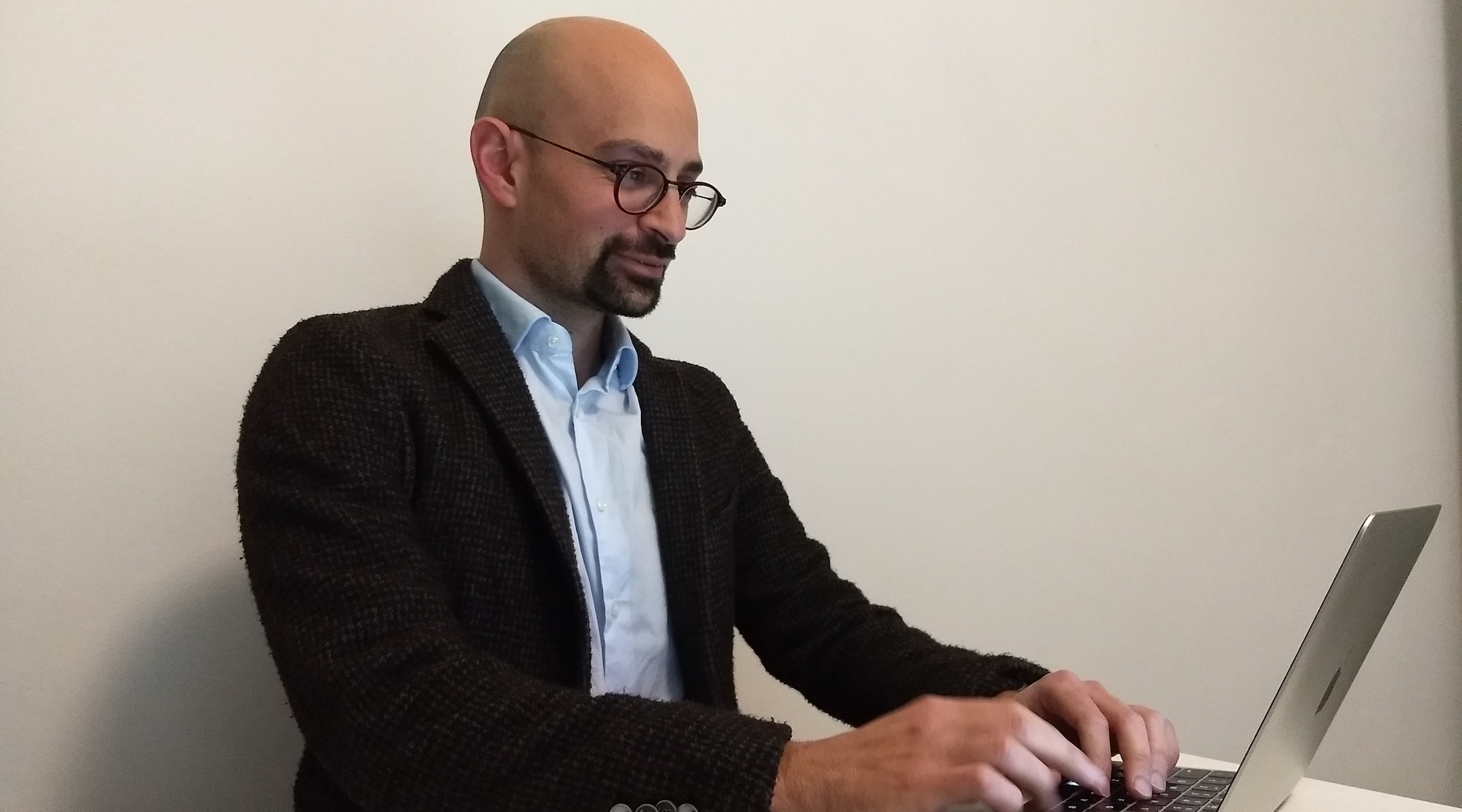 On March 9, hundreds of Italian Jews tuned in to a livestreamed reading of the Scroll of Esther for Purim carried on the Zoom video chat platform. Rabbi Ariel Finzi of Naples read the text while sitting on a baroque-style couch, presumably at his home. Participants from all across Italy left encouraging words on the chat’s text box.

“It was a powerful moment, we were all in our homes but you could really feel the community around you,” said Adam Smulevich, a journalist for Moked, the news and information service of the Union of Italian Jewish Communities, which represents the country’s approximately 30,000 Jewish citizens.

Moked, which was founded in 2009, has become a central vehicle for connecting households grieving over the coronavirus crisis in isolation.

Following the lockdown, Moked upped its production of articles and launched video editions that are streamed on Facebook. It also produces at least three newsletters each day with content from its some 100 contributors, as well as a magazine and a children’s newspaper each month.

“At first it was farther away and now it’s coming closer, it feels pretty close now,” said Daniel Reichel, a Milan-based journalist who is on Moked’s staff of five.

Italian Jews are coming together through their community’s websites, media and streamed sermons, but “also on family WhatsApp groups,” he said. Reichel’s family, which is spread across Italy and in Israel, created its first such family group to stay connected through the crisis.

But Reichel, 33, has limited time to use it and engage with his relatives. These days, Moked’s journalists wake up at the crack of dawn and work until about 10:30 p.m., he said.

“Our responsibility is important on normal days, but now it’s double: We need to provide information, of course, but also offer encouragement, sometimes a distraction, fight loneliness, inspire and fight fake news,” Reichel said. “But it’s also about offering a lifeline, being present in the lives of people who became very alone, very fast.”