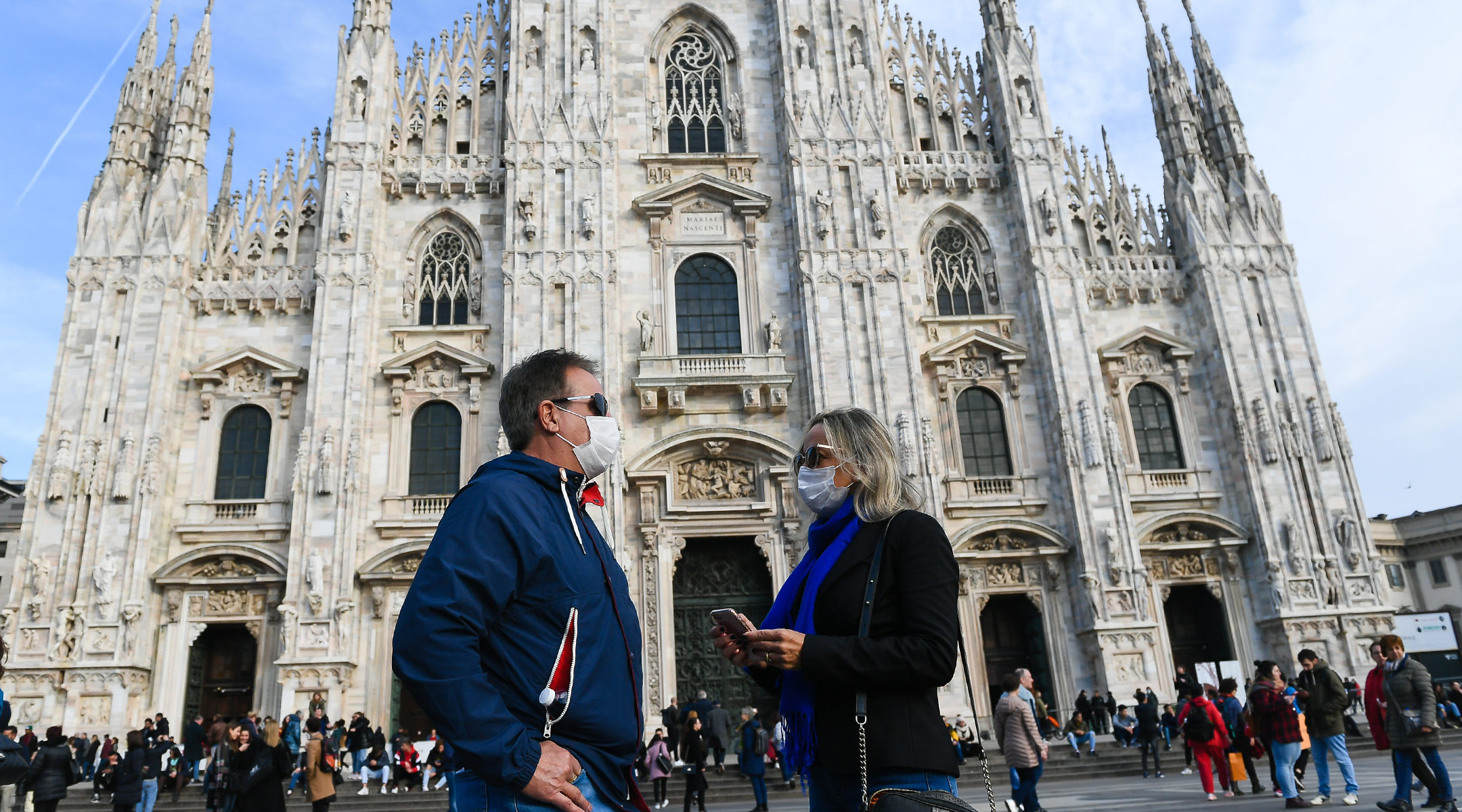 A man and woman stand outside the Milan Cathedral with protective masks and sanitizing gels, Feb. 23, 2020. (Andrea Diodato/NurPhoto via Getty Images)
Advertisement

(JTA) — The outbreak of the coronavirus in northern Italy forced Claudia Bagnarelli to make a painful choice.

“To keep visiting my 94-year-old mother, I needed to stop seeing everyone else in my life,” Bagnarelli, a Jewish ballet teacher from Milan, said Monday.

To avoid the risk of infecting her mother with the virus, Bagnarelli has gone into indefinite self-quarantine. On Monday, the Italian government ordered a lockdown of the country — including a ban on all travel and public events — in an effort to contain the spread of the disease that has already killed over 460 people there. The total number of confirmed Italian cases is nearly 10,000.

“Now I stay in my apartment all day, don’t see anybody in person and only go out to go see my mother,” Bagnarelli said. “The hardest part is not being able to see my daughter and granddaughter, whom I normally see every day.

“This is very difficult. I’m an Italian-Jewish mother, after all.”

The situation in Italy, which has a population of about 60 million, has disrupted the lives of countless Italians, many of whom have been cut off from their friends and loved ones. But Jews in Italy appear to be particularly affected because so many of them have children in Israel and other countries.

Italy has about 30,000 Jews, about 8,000 of whom live in Milan. Israel is home to approximately 10,000 Italian emigres, according to the Beit Hatfutsot Museum of the Jewish People in Tel Aviv.

“In Milan, a lot of Jews can’t see their kids,” said one such local Jewish mother of three, Sara Modena. “It’s separating families.”

“I had to choose between staying and taking care of my parents, who are in their 80s, and staying with my three children in Israel,” Modena, a 53-year-old attorney, said about the time before the quarantine.

She chose her parents even though one of her children broke his leg.

“At least they’re all together over there,” Modena said of her offspring in Israel.

As part of their action to stop the virus’ spread, authorities in Italy have ordered the closure of all schools – including Milan’s Jewish school, La Scuola Ebraica, which has 500 students – as well as churches, community centers and non-essential offices. The city, a major industry and fashion hub with one of Europe’s most vivacious nightlife scenes, “looks like a ghost town,” said Alon Schachter, a 37-year-old programmer who moved there from Israel in 2018.

“This place always reminded me of Tel Aviv,” he said. “It’s kind of sad to see it deserted now.”

On Monday, the president of the Jewish Community of Milan organization, Milo Hasbani, told congregants in a statement that synagogues will not be open for activities around the Jewish holiday of Purim, which began Monday night.

Bagnarelli, the ballet teacher as well as a former principal at Milan’s Jewish school, said she provides her ballet students with short videos of exercises, “so they can at least stay fit for when we can resume classes.”

The decrees isolating the north of Italy will be in place until April 3 at least and may well be extended.

Rabbi Moshe Lazar, the emissary of the Chabad-Lubavitch movement to Milan, told the Jewish Telegraphic Agency that Jewish burials are taking place despite the announcement by local authorities about the blanket suspension of funerals.

“Funerals will just have to be very small, but they will go on as usual,” he said.

The first Jewish burial under the new provisions in Milan is set to take place Tuesday at the local Jewish cemetery. Only a handful of close relatives will attend, a friend of the family of the deceased, a woman in her 90s who died of medical complications unrelated to the coronavirus, told JTA.

Schachter is scheduled to travel to Israel for Passover, which this year falls on April 8.

“But I don’t see how going to Israel will be possible,” he said.

There is one bright side: Supermarkets in Milan are still well stocked, several city residents told JTA. Lazar said Milan and other cities have provisions for Passover, and that in any case the outbreak does not seem set to affect the community’s ability to carry out  shechitah, the ritual slaughter of animals that is required to make meat kosher.

“For people in places that aren’t affected right now, I think it’s a good idea to stock up now on food and medical supplies and just generally put in order now all kinds of affairs, things you need to sort out with the authorities or inside the family, before it becomes much more difficult,” Modena said. “I think there’s a chance that what’s happening in Milan today will play itself out elsewhere very soon.”