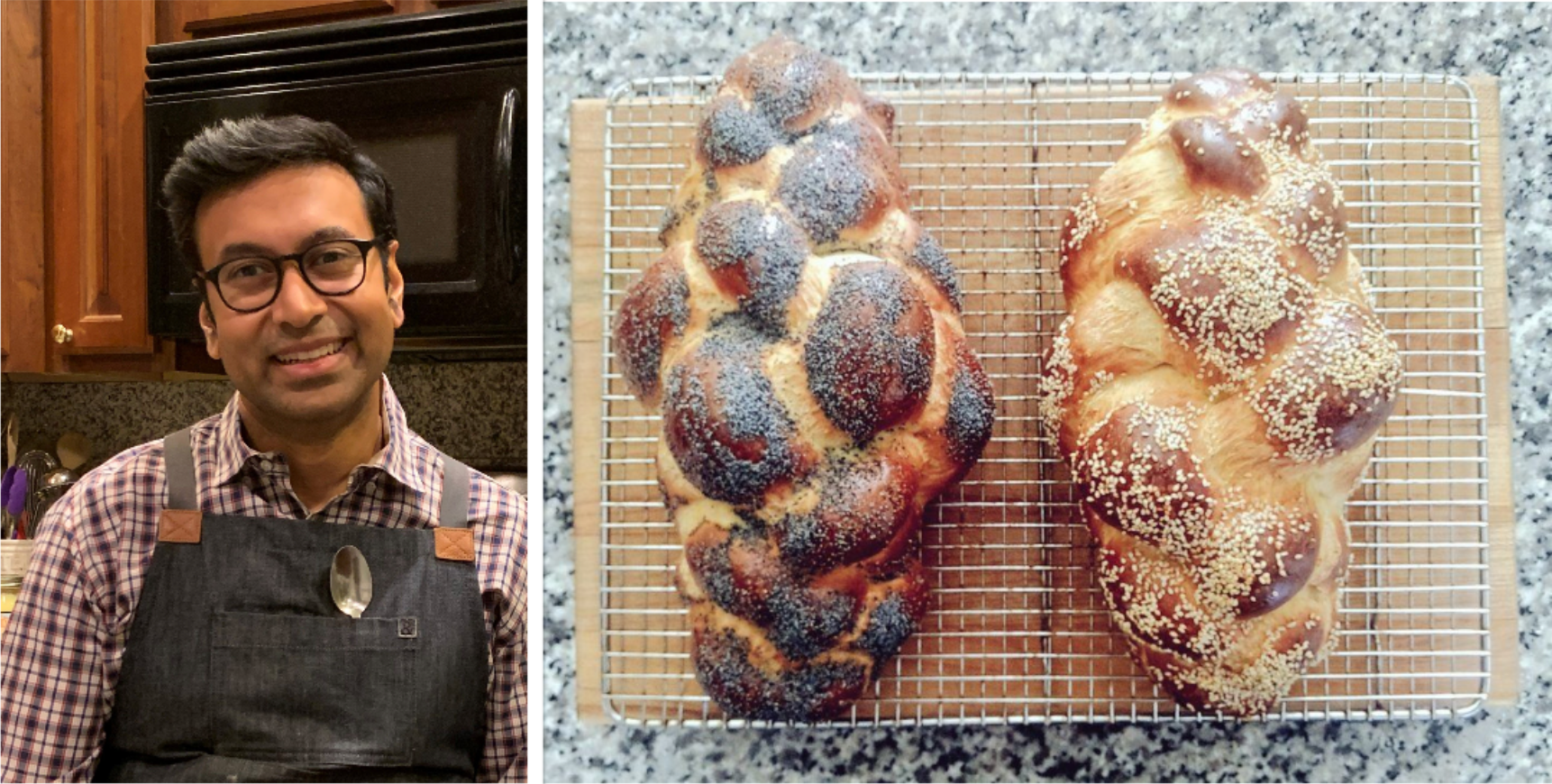 Sudeep Agarwala is a yeast scientist and challah enthusiast whose guidance for home bakers has taken off online. (Courtesy of Agarwala)
Advertisement

(JTA) — Few people have any great solutions for this difficult moment in human history, but Sudeep Agarwala is one of them.

As a yeast scientist, Agarwala spends much of his time thinking about the single-celled fungi that allow bread to rise. So when he learned that home bakers had bought out the world’s supply of active-dry yeast as they prepared for weeks of quarantine baking, he knew just how to help.

On Sunday morning, he published a Twitter thread explaining how to use dried fruit and other household ingredients to make a sourdough starter without any grocery-store yeast. That thread has been shared more than 25,000 times and already inspired multiple kitchen experiments.

But Agarwala isn’t just a yeast geneticist laboring in the labs of Gingko Bioworks, a Boston biotech firm that is shifting its focus now to tackle the coronavirus. Raised Hindu in the Chicago area, he’s also a devoted challah baker who began applying his yeast know-how to Jewish food when he met his husband, a British Jewish classics professor at Harvard University. (They’ll be sharing a Zoom Passover seder this year with his family in London.)

Just two tweets before his thread, Agarwala had posted a snapshot of the latest loaves to emerge from their oven in Cambridge, Massachusetts: two picture-perfect braids — one with poppy seeds, the other with sesame — that would kick off Shabbat dinner for two.

We chatted with Agarwala about what inspired his thread, what he’s baking these days and how he’s approaching the yeast-free holiday of Passover. This interview has been edited for length and clarity.

Agarwala: I started hearing about a shortage of yeast and I just thought — that’s the most ridiculous thing! You can get these beautiful communities of yeast in your kitchen and working for you at the drop of a hat.

Usually I tweet and maybe five people on a good day will see. But for some reason it hit a nerve.

Why do you think that is?

My first thought is everyone is just bored, bored, bored and looking for something to do. But if I think about how I’m feeling in this situation, there’s just so little that you have control of and so much worry that we have about how long is this going to go on, and will I be able to provide for myself. One of the few things I can control is the food that I make.

And then there’s a third layer: There’s this anomie of quarantine, away from anything and anyone and feeling completely distant from the world while you’re being locked up in your house. Actually being able to touch and sense by making your own food, there’s a sensual or sensory pleasure that’s kind of centering right now.

What are you making now to center yourself?

I’ve been with Paul, my husband, for 10 years this October. My entire life with him has been trying to find the perfect challah recipe, which is hard. When I first baked challah for Paul, he kind of looked at me like I was crazy — who bakes their own challah?!

Every year after Pesach I buy a one pound bag of yeast and it lasts through the year and I use it to make challah. So I’m still pursuing the quixotic quest to make the perfect challah.

And I don’t mean to brag, but I have a new recipe for challah that I’m particularly proud of which uses a Japanese milk bread method along with a standard recipe for challah. Now that people are at home, maybe I’ll post it.

How do you feel about giving the world yeast right before Passover?

I always joke that as a yeast geneticist I take Pesach as personally as possible. If you have any source of chametz, you will be cut off from the land of Israel during Pesach — it’s a tension not only because of my avocation, but also because especially this year, resources are so low that after Pesach, I’m not certain I’ll be able to buy a fresh pound of yeast to last me for the year.

So being able to conjure yeast from everyday life after Passover is over — that’s sort of a miracle.

What do you do with your sourdough starter at Passover?

I always start over every year.

So you don’t see any romance in keeping the same starter alive for, say, 20 years?

You have to look at what is truth and what is reality. The progeny of the yeast is so different from 20 years ago that that doesn’t make any sense. But there is sentimentality — you can’t ignore that this is a sourdough that I’ve been cultivating for 20 years that I can use again and maybe hand off to someone else. That’s not something you can ignore because of the cold hard facts of science.

This yeast in your thread — does it work for challah?

But then the challah we are eating now is not the challah that Jewish ancestors were eating [in ancient times]. Challah traditions have changed, with the only stipulations that challah should be parve. So if you want to transition to sourdough challah after Pesach, my understanding is as long as it’s parve, that should be great. Maybe that’s a good time for experimentation. Especially in this time of shortage, why not explore?