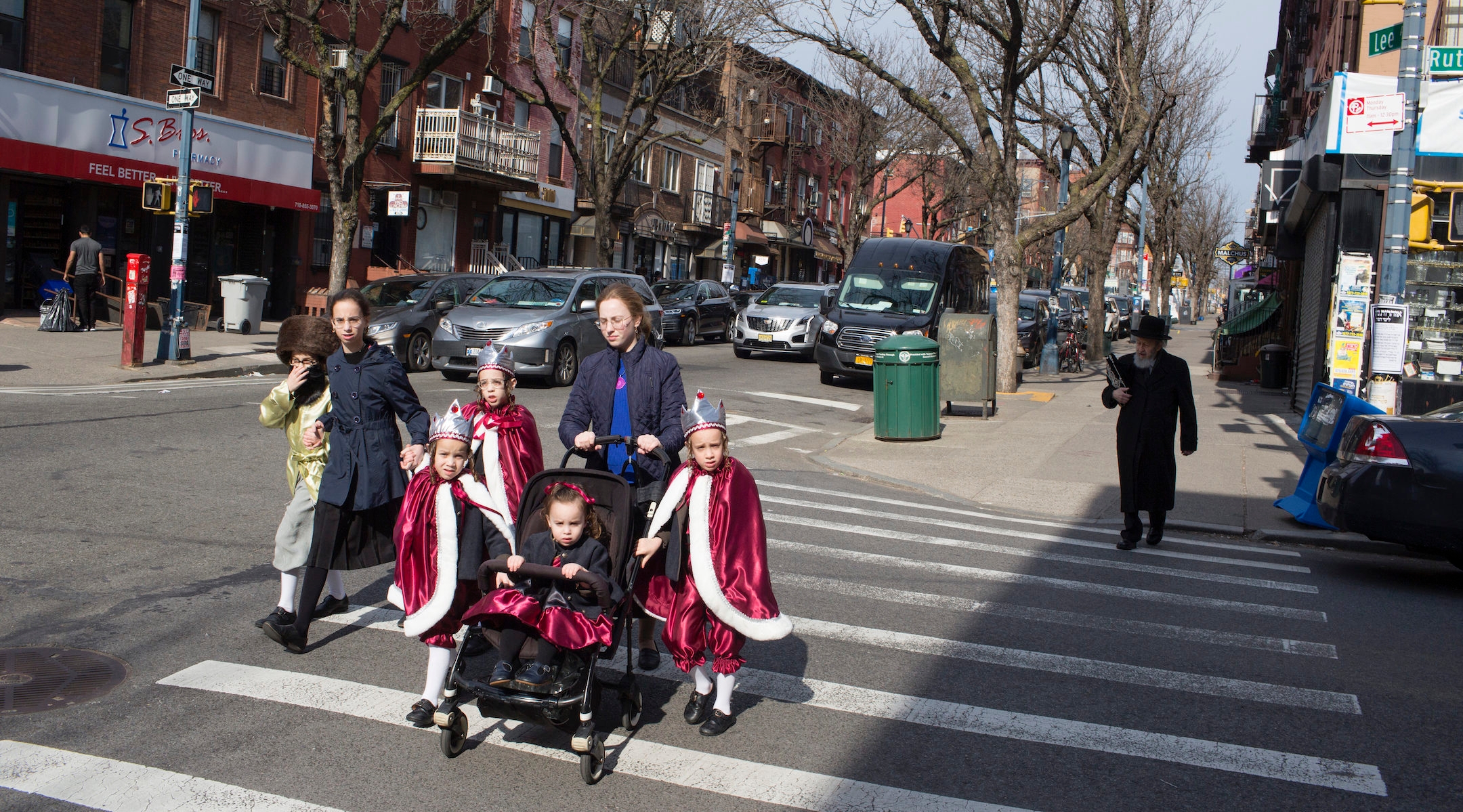 A Hasidic family is dressed up for Purim in the Brooklyn neighborhood of Williamsburg, March 10, 2020. (Andrew Lichtenstein/Getty Images)
Advertisement

NEW YORK (JTA) — The day before the Hasidic folk band Zusha performed before a crowd of 300 in the Brooklyn neighborhood of Crown Heights on the evening of March 9, the band’s manager thought about canceling the event.

The concert was to celebrate the Jewish holiday of Purim, a one-day festival marked by dressing in costume, communal dancing and feasting — often in crowded and raucous settings. But the incipient spread of the novel coronavirus in New York was giving the manager, Paltiel Ratzenberg, second thoughts.

No government body had advised against large gatherings — that would come nearly a week later — but the virus already was making its presence felt among New York Jews. An outbreak that began in late February in New Rochelle, a suburb just north of New York City, led to some synagogues canceling services and others announcing that they had nixed their Purim parties.

So Ratzenberg called the Centers for Disease Control and Prevention to ask for guidance. He also called a local rabbi.

Ratzenberg told the Jewish Telegraphic Agency that both gave him the go-ahead. The band also wanted to play. So the show went on — with plenty of hand sanitizer available.

“At that time, the night of Purim, there was no reason to cancel that event,” he said. “[We] said we’re following all the guidelines and we’re going to be taking the necessary precautions like everybody else told us to.”

In the Brooklyn neighborhoods of Borough Park, Crown Heights and Williamsburg, between 62% and 67% of coronavirus tests have come back positive, compared to the citywide rate of 53%. Over one weekend recently, 100 people tested positive for the virus at one Borough Park urgent care center. Orthodox newspapers are filled with death notices, including for some leading rabbis of the Chabad Hasidic movement. Deaths from the virus have overwhelmed one Brooklyn Orthodox funeral home, according to the Forward.

“I would have canceled,” Ratzenberg said this week, looking back. If Purim was a week later, he added, “we wouldn’t have done it.”

But Purim came when it did — after COVID-19 arrived in the United States but before the school closures, crowd restrictions and stay-at-home orders now trying to blunt its spread. That made the parties in Jewish communities perfect vectors for infection — like Mardi Gras in New Orleans, the weeklong celebration that is seen as driving the city’s high coronavirus toll.

“Purim came at a really bad time in the outbreak,” Eili Klein, a professor of emergency medicine at Johns Hopkins Medical School in Baltimore, told JTA. “The virus was just starting to spread in the community, and congregations of people in close proximity might have allowed the small number of infected people to spread it more widely than they might have otherwise.”

Since Purim, it has become increasingly clear that those who have been exposed to the coronavirus but are showing no symptoms can indeed spread the disease without “having even realized they were sick,” Klein told JTA.

Ten days after the holiday, Eli Schwebel was in NYU Langone Hospital thinking he was about to die from COVID-19. The Jewish musician had been at the Zusha concert — as well as other parties the same night.

“I must have been with, I don’t know, 1,000 different people that night,” Schwebel, a Jewish musician who lives in Brooklyn, told JTA. “I’m sure it came from one of those places.” 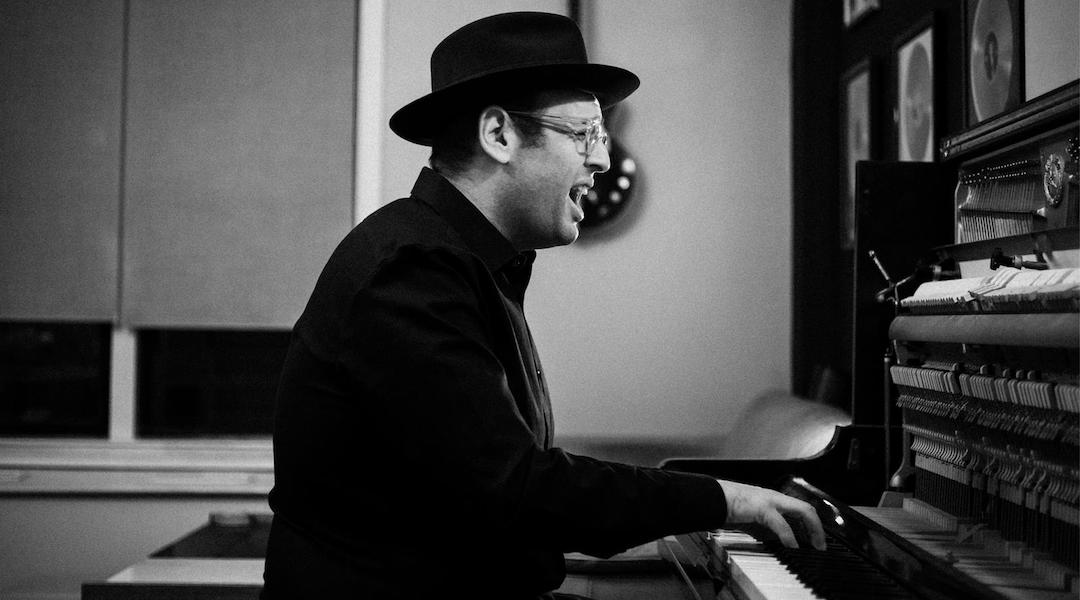 Eli Schwebel, a Jewish musician from Brooklyn, was hospitalized with the coronavirus after attending multiple Purim parties. (Courtesy of Schwebel)

Authorities worldwide already were aware of the dangers of mass gathering as Purim approached. Israel had banned assemblies of 5,000, a restriction that feels quaint four weeks later when meetings of more than two people are barred in that country. But that order spurred the country’s metropolises to cancel their city festivals. Purim celebrations in Milan, an Italian city especially hard hit by the coronavirus, also were canceled.

But other Purim festivities in Lakewood went on as planned. Now the township of 100,000-plus has a much higher incidence of positive tests per capita than the surrounding towns. More than four residents per 1,000 in Lakewood have tested positive for COVID-19 — double the average in Ocean County. (The county does not receive reports of negative tests and thus cannot provide a percentage of positive tests.)

Avi Schnall, the New Jersey director of Agudath Israel of America, a haredi Orthodox organization, lives in Lakewood and celebrated Purim at his synagogue and his rabbi’s house. Had state officials advised against doing so, Schnall said, he would have listened.

For the Passover holiday, which starts on Wednesday night, he will be celebrating at home with just his immediate family for the first time ever.

In the category of “gatherings that, in retrospect, probably shouldn’t have happened,” Purim parties are far from alone.

Mardi Gras is among the biggest examples, but a March 5 birthday party in a wealthy Connecticut suburb led to about half the guests being infected, as did a Feb. 29 funeral in Albany, Georgia, according to The New York Times. After a March 10 choir practice in Washington state, 45 of the 60 people on hand got the coronavirus, according to The Los Angeles Times. Two have died.

“When you see community spread, which is what has been reported in New Orleans, in Albany, Georgia, and in many other places … this is primarily driven by people who are already infected but not many are symptomatic,” said Adebola Adedimeji, a professor of epidemiology and population health at Albert Einstein College of Medicine in New York City. “People come together, they interact very closely, someone already has the virus and infects others. It is quite probable.”

“The Orthodox community is generally a more social community than most,” Klein told JTA. “Between communal lunches on Saturdays, regular religious services, mourning rituals … some international travel, and large families, there was potential for this to spread faster in this community regardless of Purim.”

Schwebel, who first showed symptoms of the virus after Purim, said he “went through hell” in the hospital, thinking he was going to die. He has recovered enough to be sent home, but is still shaken by the experience. He wishes that leading rabbis in Brooklyn would have instructed their followers to avoid Purim parties.

But now, Schwebel says, his community is taking it seriously. Unlike Purim, he’ll spurn the traditional large Passover seder gatherings of friends and family. Schwebel hopes to join his sister for the festive meal. Or perhaps he will join a handful of others who have survived the coronavirus.

If not, he will celebrate alone in his apartment.

“I think people are screaming if anybody goes out in the frum community,” he said, using a Yiddish word connoting religiosity. “The rabbis are getting serious about it. They’re not messing around.”