In some European Jewish communities, getting the coronavirus carries a stigma 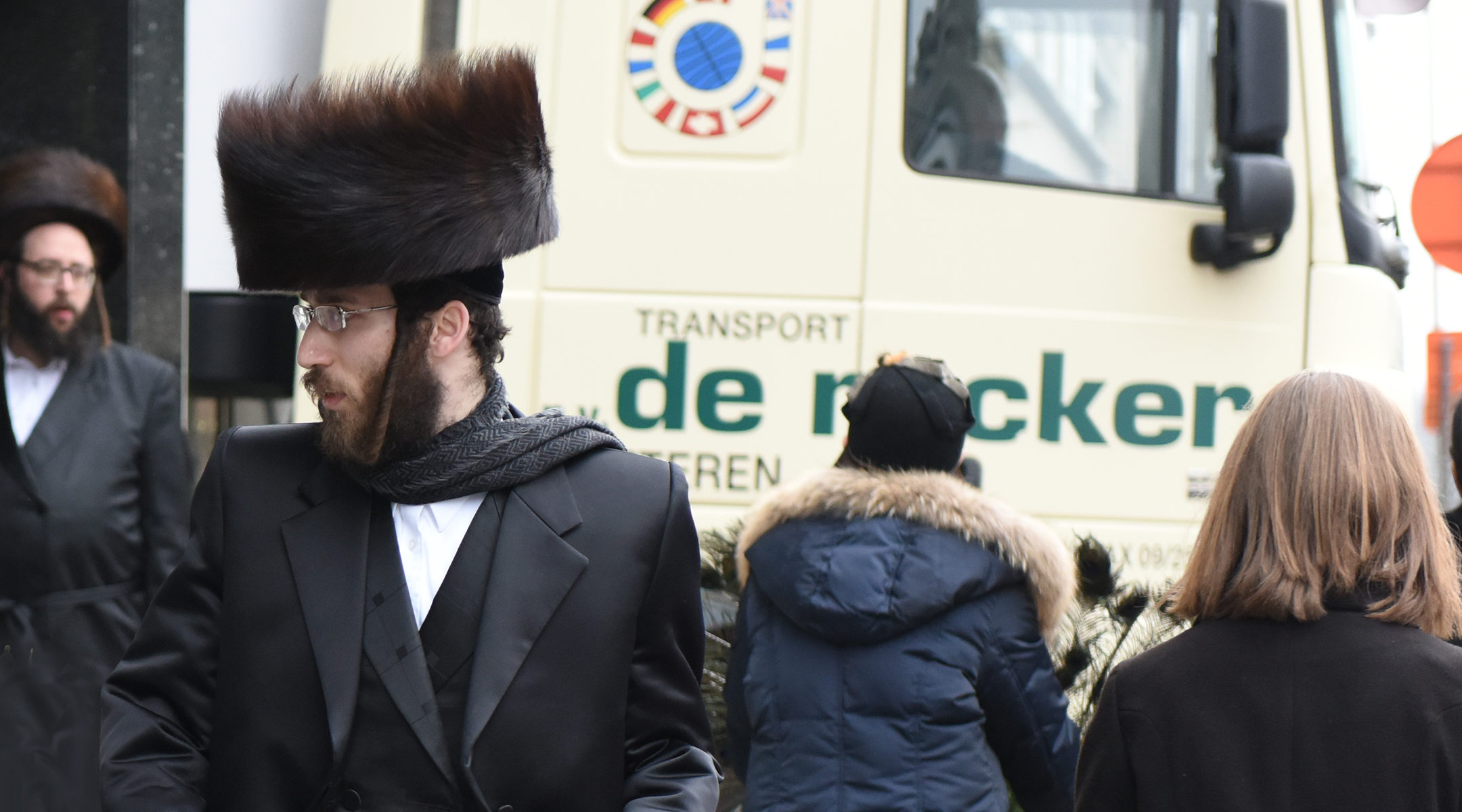 (JTA) — The coronavirus has spread rapidly among members of the Jewish community of Antwerp, which has a large Orthodox population. At least five have died and another 10 are hospitalized in serious condition.

But the virus is hardly ever mentioned there by name.

“People call it ‘the disease’ or they say they have ‘fallen ill,’ but there’s a taboo, a stigma on it and a sense of shame around it,” said Martin Rosenblum, a doctor in the Belgian city who sees patients from its predominantly haredi Orthodox population. “It means that some people with the virus wait until they’re in really bad shape before they try to go to hospital or get help.”

Although synagogues have closed down in Antwerp, some Orthodox Jews continue to pray together there. Those affected by the virus are hoping that their peers and fellow community members won’t ever know they contracted it.

They aren’t alone in Western Europe — Jews and even Jewish leaders in places like Milan and London show a trend of avoiding conversation around the virus in communities that could potentially be very hard hit by COVID-19.

And it’s not only a trend among the haredi Orthodox, who are particularly at risk because of their highly social lifestyle, disregard for medical advice and lack of access to scientific information due to rabbinical bans on smartphones and television.

In Milan, where thousands have died from the virus, the head of the local Jewish community group said he is encountering — and fighting against — a widespread reluctance to speak about the disease across denominations.

That, Milo Hasbani said, is not unique or especially common among Jews but is shared by many Italians.

“I don’t understand the stigma, but I’ve encountered it in the community,” he said. “Why would people be ashamed? It’s not a sexually transmitted disease, you can get it from standing too close to someone, from wiping your grandchild’s nose. So why are people hiding it?”

Hasbani believes the answer lies in fear of the disease and reluctance to admit the virus’ acute danger. He said this sense of secrecy in the early stages of COVID-19 “was disastrous because it prevented people who came into contact with coronavirus carriers from being warned to self-isolate.”

“So they went about their business as usual, and the ones who had it spread it to others,” Hasbani said.

On the Facebook group of the Jewish Community of Milan, the organization heading Jewish activities there, Hasbani urged community members who are displaying symptoms or believe they’ve been infected to say so publicly for the good of the community.

But no one answered his call, even in a community with multiple carriers that has seen several deaths, including one of its former leaders, Michele Sciama.

Not all Jews on the continent are afraid of broadcasting their infection. In France, for example, Joel Mergui, a physician and the head of the Consistoire, the communal organ providing religious services, told his community on March 24 that he had the virus.

Alain Azria, a French-Jewish photographer who often covers communal events, followed suit. On March 27, Azria wrote on Facebook that he just learned that he had probably contracted the virus around March 17, and that anyone who came into contact with him since then should self-isolate and be tested. 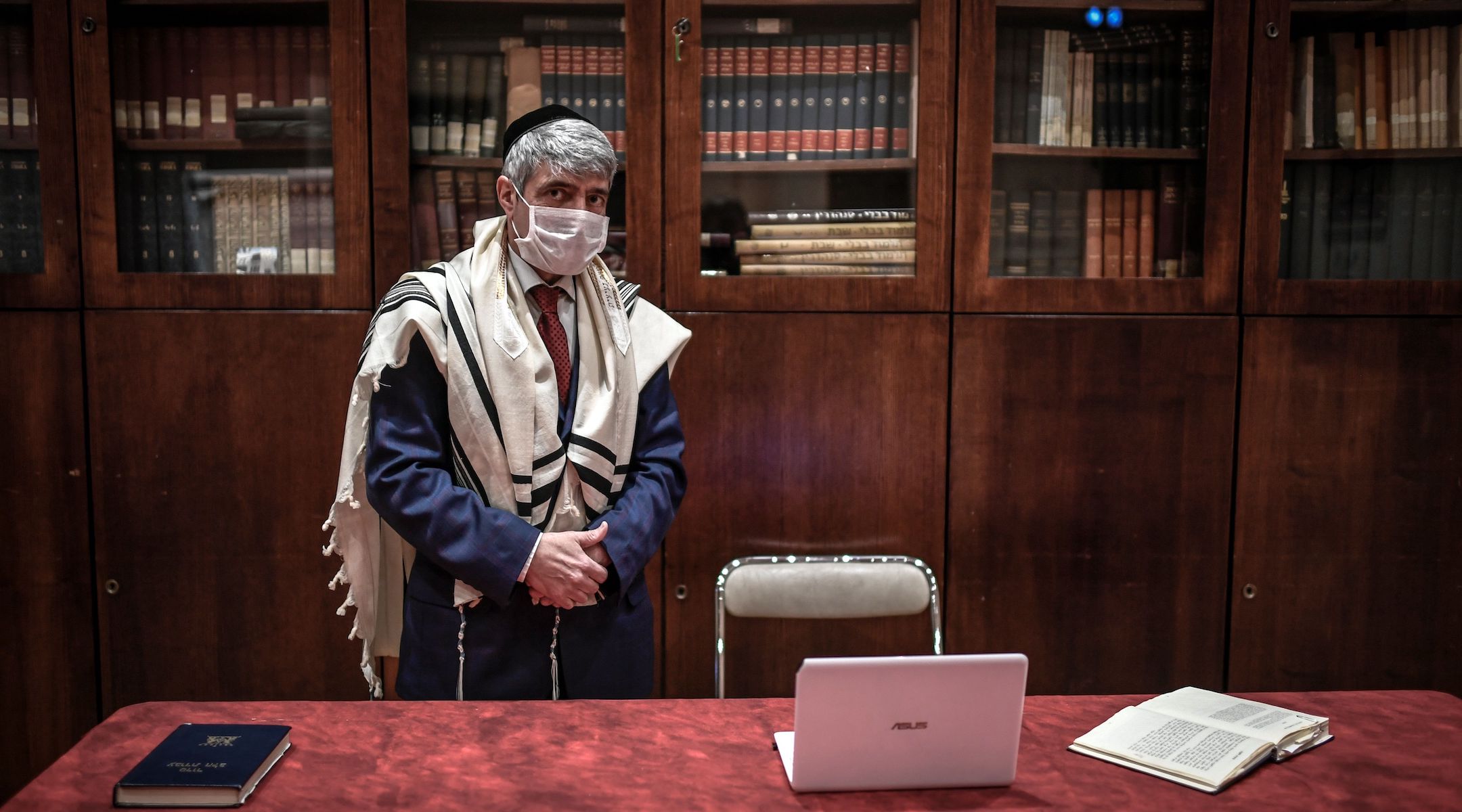 Rabbi Philippe Haddad prepares for a Shabbat service via videoconference at the Copernic Synagogue in Paris, March 28, 2020. (Stephane de Sakutin/AFP via Getty Images)

The larger British Jewish community, represented by the Board of Deputies umbrella, is probably the most transparent in Europe in terms of cataloging Jewish deaths. It’s the only national representative group of any Jewish community that keeps and publishes a list of members who died of the virus.

The board declined to comment on why it was publishing the data, but a former community consultant, Rabbi Alexander Goldberg, said he believed it was to help community members assess their risk and exposure.

Around the world, the more commonly discussed stigma attached to the virus has been related to the violence and rhetoric directed at Chinese and other Asian peoples by those who blame China, where the virus originated, for spreading it.

“The current COVID-19 outbreak has provoked social stigma and discriminatory behaviors against people of certain ethnic backgrounds as well as anyone perceived to have been in contact with the virus,” the World Heath Organization wrote in a report it co-authored with UNICEF and the International Red Cross and published on Feb. 24.

This “might contribute to a situation where the virus is more, not less, likely to spread,” the report said, resulting in “more severe health problems and difficulties controlling a disease outbreak.”

But the stigmas building in the Jewish community aren’t all about the sources of spread.

In Belgium, Rosenblum said that Jews there see contracting the virus as a sign of frowned-upon contact with the outside world.

“[The coronavirus] was seen as something like AIDS, happening in the outside world and afflicting the decadence out there,” Rosenblum told Radio Judaica, a Belgian-Jewish station, last week.

There’s a bit of historical-religious precedent, too.

One pamphlet circulating in haredi communities in Israel through WhatsApp, even though many haredi Jews avoid using smartphones, is headlined “Saying corona is forbidden” and promises that censoring the virus is “the way to weakening corona.” It quotes Johanan bar Nappaha, a third-century rabbi, who ruled against mentioning diseases publicly.

“When you say ‘corona,’ you’re making the disease grow,” the pamphlet reads.

There’s also the fear that one could be seen as a contaminated threat to a specific community.

On March 14, the Jewish Telegraphic Agency reached out to Yoni Golker, a Modern Orthodox rabbi at the St. John’s Wood Synagogue in London, to confirm reports that he became ill with the virus shortly after visiting the Jewish community in Casablanca, Morocco — it’s been badly hit by the virus.

“This is a private medical matter and you have no right to publish any of it,” he said abruptly.

Six days later Golker, who said he had a mild case of the virus, posted on YouTube a message to his congregants thanking them for their support, stating he was fully recovered. Asked again this week whether he’d agree to an interview, he again declined, saying only that “I’m trying to keep my name out of the media now.”

One member of the Milan community, Karen Cole, compared the coronavirus stigma to what happens when there’s an outbreak of head lice at the Italian city’s Jewish school.

“Moms are ashamed to say their child had them, they don’t warn other mothers [so] they don’t check their children, and within two days the whole school has them,” she wrote.

But, Cole added, “Lice can’t kill you like the coronavirus does.”