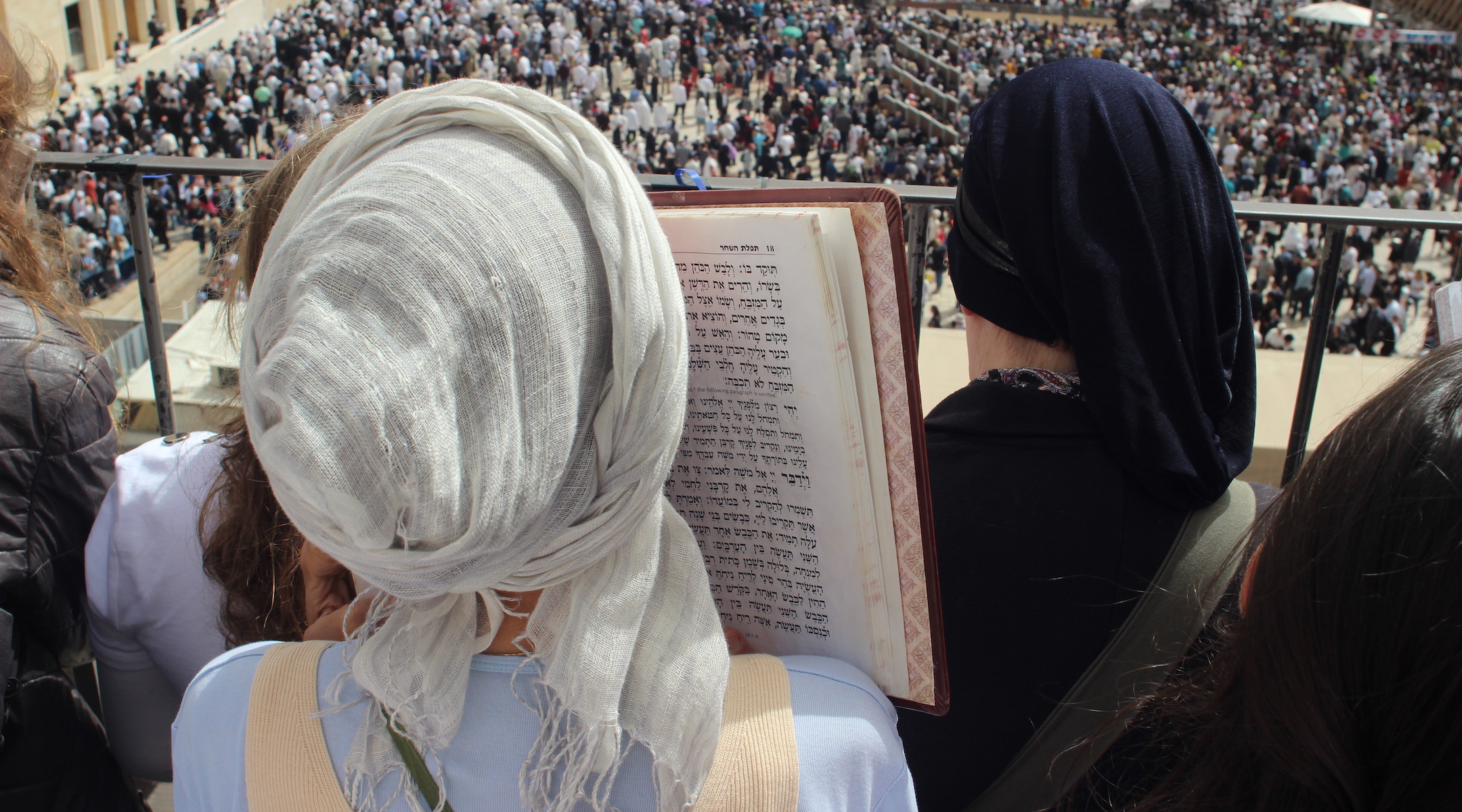 JERUSALEM (JTA) — This time of year — the convergence of Passover, Easter and Ramadan — is peak tourism time for this city. This year is the first time since 1992 that all three festivals fall in the same month.

But traveling as a tourist to Jerusalem right now is impossible: Those flying in would have to self-quarantine in a hotel room for two weeks.

A Jerusalem museum has a possible remedy: a virtual reality tour of holy sites in the famed Old City neighborhood.

The Tower of David Museum has released “The Holy City,” an immersive VR experience, that’s free through April 24, the first day of Ramadan. (The free release began on April 9, the first full day of Passover.)

In collaboration with two VR firms — Blimey in Israel and OccupiedVR in Canada — the museum through its Innovation Lab’s 360-degree simulation allows users to walk through the Church of the Holy Sepulchre during Easter’s Holy Fire ceremony; sit among worshippers in the Al-Aqsa Mosque during Ramadan prayers; and stand with the throngs at the Western Wall as they receive the ancient priestly blessing at Passover.

The coronavirus notwithstanding, the project also gives individuals the opportunity to experience holy sites in simulation even if their faith, gender or physical abilities would prevent them from doing so in real life.

One user recalled visiting Israel in 2013.

“We experienced the most beautiful religious celebrations,” Fatima Lemus Lipton said. “This documentary brought us back to that day. What a joy to have seen it.”

Jenny Nathan, another user stranded in the U.S. by the coronavirus, said the experience was a welcome “blessing on [her] Easter Sunday.”

The initial viewings have evoked strong reactions, according to Caroline Shapiro, the Tower of David Museum’s director of international public relations.

“We have people crying, we have people with goosebumps,” she said. “Just because it is going into these incredible places at these significant times, and experiencing them, which is obviously very, very special.” 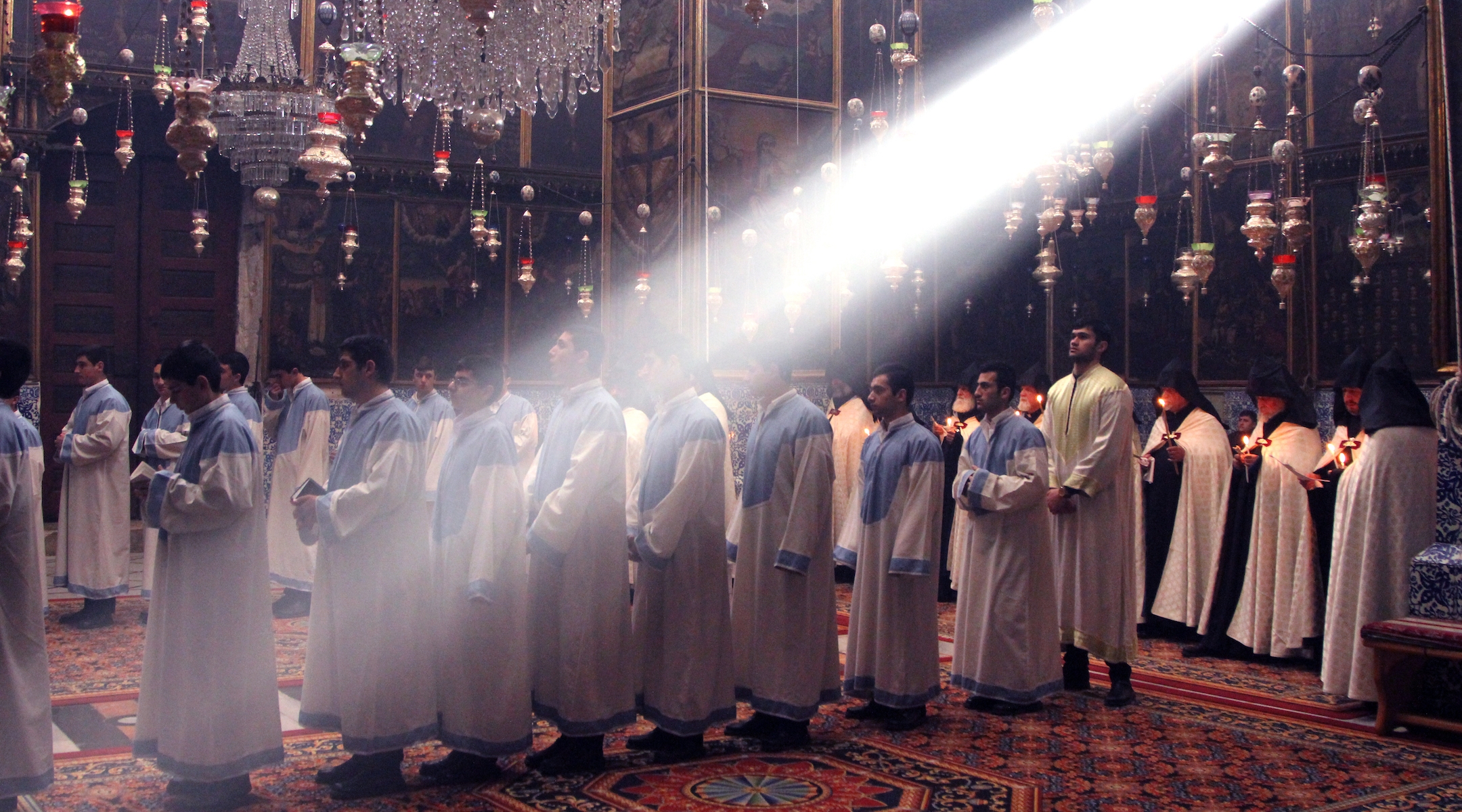 “The Holy City” brings users inside multiple houses of worship, including the Cathedral of St. James in Jerusalem’s Armenian Quarter. (Nimrod Shanit/Blimey)

The Old City is a one square kilometer (slightly more than a third of a square mile) walled area within the modern city of Jerusalem. Tourists, vendors, pilgrims and religious students typically crowd its narrow, cobblestone streets.

The area is home to many sites of key religious importance, including the Church of the Holy Sepulchre for Christians, the Al-Aqsa Mosque and Dome of the Rock for Muslims, and the Temple Mount and Western Wall for Jews.

Before the COVID-19 crisis, the museum was planning to use the product only in house for visitors. But now Shapiro says tens of thousands have used it online.

The experience requires a team of two — one person wears the VR glasses and the other has a tablet. It starts with a two-minute journey through Jerusalem history played in a room where the user can walk around a miniature model of the Old City and explore it up close.

In the museum, the simulation also features a quest and adventure game, which has the teams working together to solve challenges and find clues leading them from site to site.

The online version is compatible with VR headsets or computer monitors. It preserves the 360-degree immersive experience but does not include the interactive game play components.

“It should have been a huge pilgrimage year,”Shapiro said. “We’re hoping that we’ll be able to bring a little bit of Jerusalem to different people all over the world that aren’t able to make it here.”

The 3-D spaces were created by stitching together hundreds of thousands of photos captured on high-resolution cameras.

“Walking around Jerusalem with a camera that looks like a bomb and has little resemblance to a regular camera was not easy,” said Nimrod Shanit, the director and producer of “The Holy City.” “Once we got past this first hurdle, we were faced with the challenge of filming the gates to the city and the holy sites when no one was about. The team would wake up at 3 a.m. and wait for the first light, waiting for the night workers to head home, then capturing as quickly as possible while the sites were clear.”

The Tower of David is just one of the many museums adapting to the COVID-19 crisis and offering free online content. Institutions ranging from the Vatican Museums, to New York’s  Metropolitan Museum of Art, to the Smithsonian, to the Louvre and beyond are all temporarily shuttered. 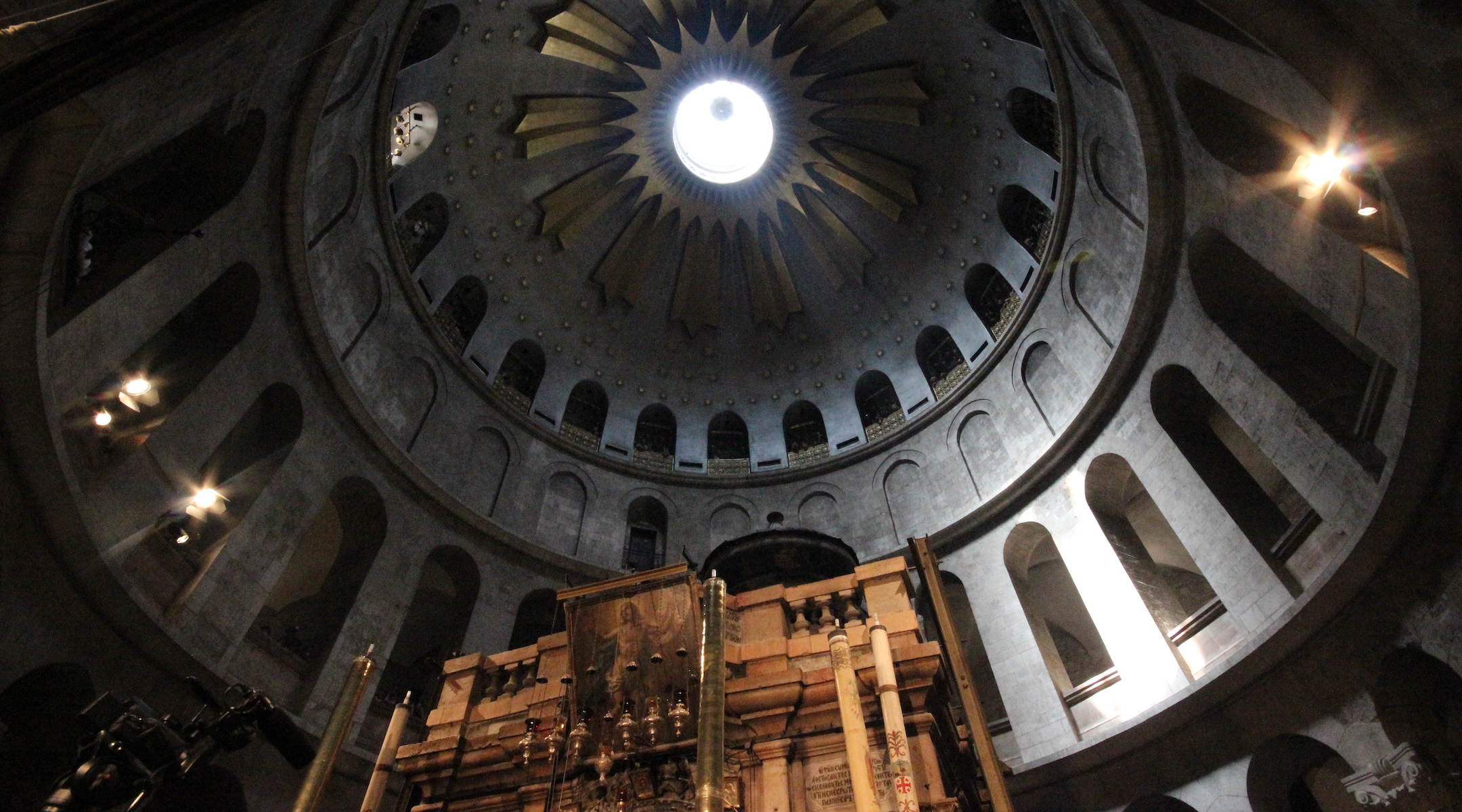 This “Holy City” view features the inside of the Church of the Holy Sepulchre. (Nimrod Shanit/Blimey)

Using the hashtag #MuseumFromHome, cultural institutions worldwide have shared posts on Instagram about ways to experience their collections from the comfort of their own living room sofa. For example, Google has partnered with over 500 museums and galleries to allow users to browse featured collections and use the tech firm’s interior Street View to wander gallery halls.

Israel remains under a semi-complete shutdown because of the coronavirus. The government has banned group prayer, with an exception for the Western Wall, where a group of 10 men, or minyan, pray three times a day. This year, the traditional Passover priestly blessing was performed with only 10 worshippers present, including U.S. Ambassador to Israel David Friedman.

“Last year I was among 100,000; this year, unfortunately, far less. I will pray that the world is spared further illness or sorrow from COVID-19 or otherwise,” Friedman wrote on Twitter.

On Saturday, the day before Easter for Orthodox Christians, the Holy Fire ceremony will be similarly limited to 10 Eastern Orthodox religious leaders. Usually the holy flame is shared candle to candle by thousands of worshippers and then sent to Orthodox Christian communities around the globe through special flights.

Shapiro said the role of virtual reality experiences like “The Holy City” may be more important now than ever.

“You are not a viewer on it. You are part of it,” she said. “And I think particularly right now, when we’re all being told to separate from people, and to be far from people, VR is going to have a very positive impact. It allows you to feel like you are actually amongst people.”