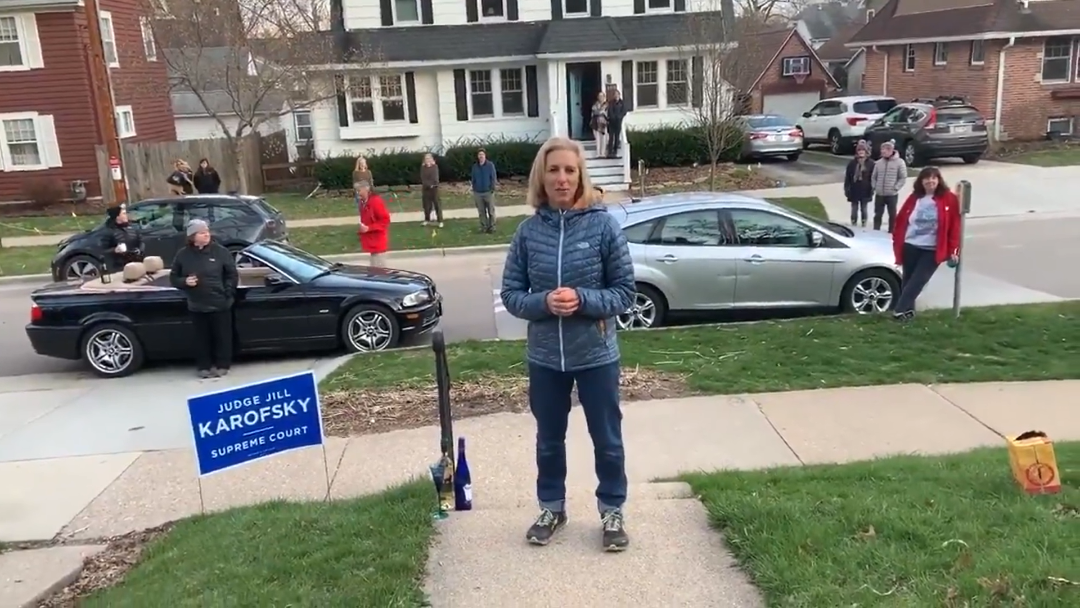 Jill Karofsky celebrates her election to Wisconsin's Supreme Court at a social distance outside her Madison home, April 13, 2020. (Screenshot)
Advertisement

WASHINGTON (JTA) — Jill Karofsky campaigned from a pandemic-induced social distance, and she celebrated the same way after her surprise election to Wisconsin’s Supreme Court.

“I couldn’t have done it without your help,” the 53-year-old judge shouted from a six-foot distance into a camera last week in front of her Madison home as neighbors cheered from their porches and the street. “I’m celebrating social distance-wise.”

President Donald Trump was likewise not subdued in expressing his dismay over the Democrat’s victory.

“GET RID OF BALLOT HARVESTING, IT IS RAMPANT WITH FRAUD,” Trump thundered April 14 on Twitter, the day after the announcement of the election results. “THE USA MUST HAVE VOTER I.D., THE ONLY WAY TO GET AN HONEST COUNT!”

GET RID OF BALLOT HARVESTING, IT IS RAMPANT WITH FRAUD. THE USA MUST HAVE VOTER I.D., THE ONLY WAY TO GET AN HONEST COUNT!

He was referring to the legal practice of designating agents to deliver sealed absentee ballots to polling stations — one that’s not known to be tainted by fraud.

Karofsky’s election may be many things — a signal of resentment at how Republicans have handled the coronavirus crisis, a harbinger of what happens in November — but it also tells the story of how the state’s tiny Jewish community has flourished in politics. Karofsky is Jewish.

Trump twice had endorsed Karofsky’s opponent, the incumbent Dan Kelly, and Republicans in the state went all the way to the U.S. Supreme Court to quash Democratic bids to loosen conditions for voters who preferred to mail in their votes because of the pandemic.

It backfired: There was a high turnout on Election Day, April 7 (authorities waited six days to announce results) and by Wisconsin standards, Karofsky crushed Kelly: She won 55 to 45 percent in a purple state where votes in recent years have been decided customarily by less than a percentage point.

Karofsky’s mother, Judy, was mayor of the Madison suburb Middleton in the 1970s, and the family has long been active in the local Jewish community, according to those who know her. Karofsky did not respond to requests for an interview.

She will be the third Jewish woman to serve on the Wisconsin Supreme Court: Shirley Abrahamson was the chief justice until 2015, when she stepped down, and Rebecca Dallet remains an associate justice.

Karofsky’s win raises the liberal minority on the seven-justice court to three.

Much of the coverage of her victory and that of other Democrats in local elections focused on whether it was a sign of what’s to come in November. Trump flipped the state in 2016 — Wisconsin had voted Democratic in presidential races since 1988 — by 18,000 votes, less than one percentage point. Along with Michigan and Pennsylvania, states Trump also flipped, Wisconsin is seen as crucial to Trump’s re-election.

Some political analysts see the margin of Karofsky’s win as bad news for Trump’s chances in the fall. If Democrats were ready to brave infection to vote, the argument goes, they will be even more eager to dump Trump once the threat diminishes.

Others note that there was a competitive Democratic presidential primary on voting day — Bernie Sanders pulled out of the race the next day, effectively making Joe Biden the nominee — and that’s why Democrats were likelier to head to the polls than Republicans.

Whatever the case, Karofsky’s election is another chapter in how Jews have flourished in the state, politically and otherwise. There are 30,000 Jews there in a population of 6 million, but Jews have occupied positions of prominence. In recent years, in addition to the three Jewish justices, two Jews have served as Democratic U.S. senators: Russ Feingold for three terms from 1993 to 2011, and Herb Kohl for four, from 1989 to 2013. Kohl, who helped found Kohl’s Department Stores, was a longtime majority owner of the Milwaukee’s NBA franchise, the Bucks.

Michael Blumenfeld, who directs the Wisconsin Jewish Conference, which represents the statewide Jewish community, said Jews have been politically successful for the same reason the state fluctuates between Democrats and Republicans: Wisconsinites are less prone to being tribal. They are likelier to consider the candidate on the ballot rather than the party or religious affiliation.

“I think it’s more a tribute to Wisconsin voters than to the Jewish folks we have,” Blumenfeld said in an interview. “In our politics, we have a strong tradition, Wisconsin voters looking at the individual.”

Karofsky, Rosenthal said, is tireless and “very proud of her Jewish identity.” She attends High Holiday services. She’s also a single mother of two children, one in college, and prior to becoming a Circuit Court judge in 2017, she served as a prosecutor whose focus was violence against women.

“She’s one of these people, if you met her you would immediately want to be friends,” Rosenthal said. “Election Day was very strange — people truly wanted to take risks to vote for Jill.”