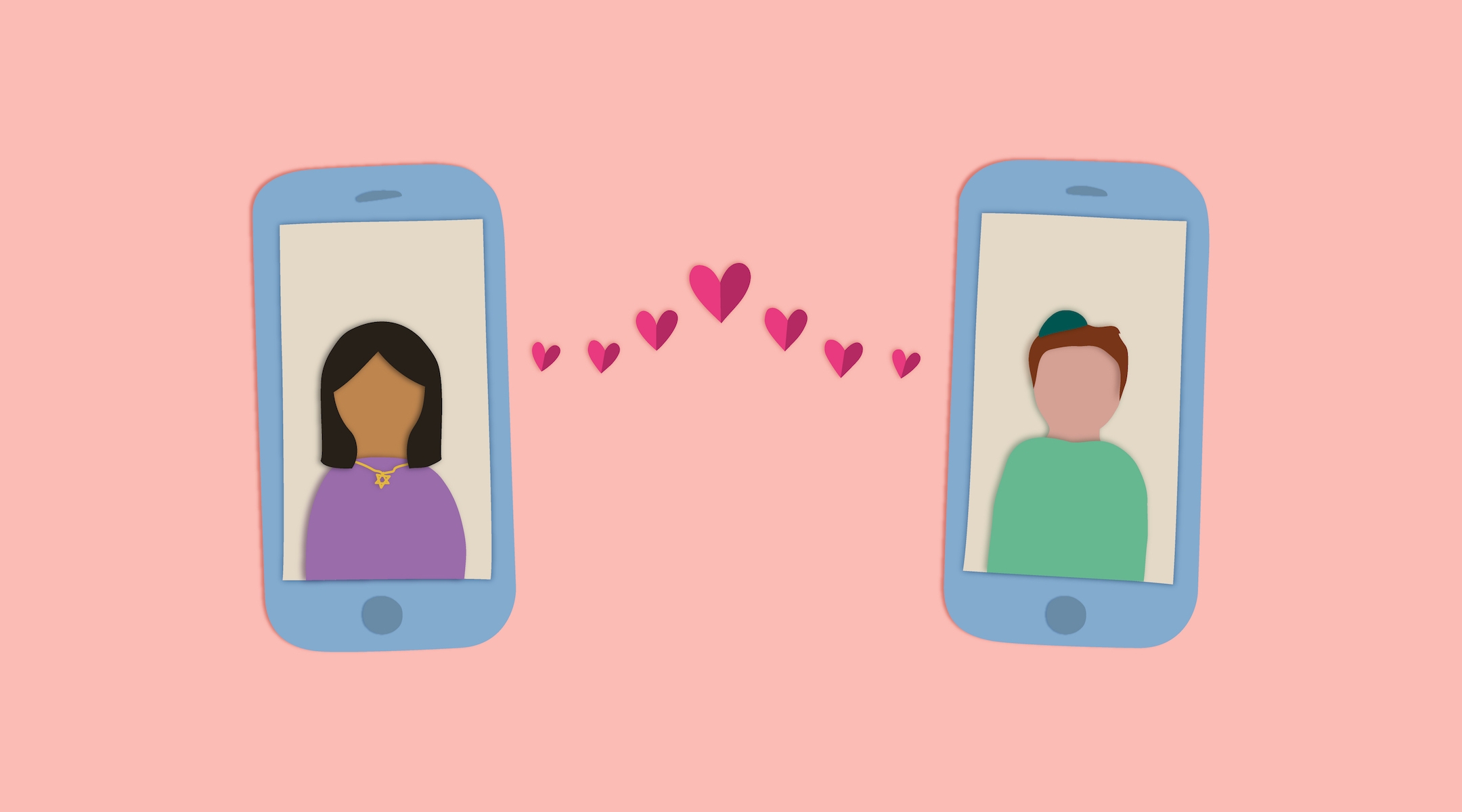 (JTA) — A week and a half ago, Josephine Stockwell had her first date with Nathan, a guy she had been texting for some time.

The two really hit it off. They both speak Spanish, love romantic comedies and relate to Judaism in similar ways. They wound up talking for two and a half hours.

“I don’t even have the words to describe what that was like because I’ve never had that experience, but we are on the same wavelength more than I ever thought was possible for a partner,” said the 23-year-old graduate student at Northwestern University.

The two now text all the time and have hour-long conversations almost every day.

“I hesitate to say [we’re] in a relationship because it’s only been a few days but we both are very committed to each other,” she said.

The catch: The pair have yet to meet in real life.

As social distancing has become the norm during the pandemic, meeting a stranger for dinner and drinks seems like a distant memory. But that doesn’t mean young Jews aren’t looking for — and finding — romance. While Orthodox Jews who use matchmakers have seen their process go digital for the first time, other Jews who might be more accustomed to online dating have seen pandemic-specific platforms — one is even called CoronaCrush — emerge to match the unusual circumstances.

Stockwell met her beau through MeetJew University Dating, a Facebook group that popped up as colleges began sending students home due to the pandemic and now has more than 38,000 members.

Founder Aaron Raimi had little matchmaking experience prior to starting the group — other than successfully setting up an ex with one of his friends.

But the 23-year-old San Diego resident was inspired after another Facebook group for Jewish college students during quarantine, Zoom University Hillel, became wildly popular. In that group, which emerged to simulate a cornerstone of the collegiate Jewish experience, hanging out at Hillel, students from across the country post memes, jokes and discuss anything from politics to Jewish identity and interfaith dating.

“What popped into my head was there should be a group for dating” specifically, Raimi said.

MeetJew University grew quickly, and Raimi has since added two spinoffs for older age groups (MeetJew University caters to ages 18-26) as well as a group for those looking to make friends. His dating groups now have more than 43,000 members combined.

There are many ways people can meet others through the group. People can post personals or fill out a 50-question survey that Raimi created to match members. Questions include everything from basics like age and sexual orientation to Jewish affiliation to kosher-keeping habits and music tastes.

Jackie Abrams, a 20-year-old college student living in Troy, New York, chatted with 14 people in the group before she met a “really cute” guy through a Zoom chat hosted by one of the group’s members. Though her love interest lives in Canada, about a four-hour drive from her home, the two talk daily and hope to meet up after the quarantine.

“Besides the fact that he’s cute and he’s Jewish, he’s also a stoner like me, which is important but not a defining characteristic. He’s smart, he’s pre-law,” she said.

MeetJew University isn’t the only Facebook group for Jews looking to date during the pandemic. There’s also CoronaCrush, whose membership skew more religious and Israel-based. Co-founder Ian Mark says he and several of his friends decided to start CoronaCrush after seeing Raimi’s group.

“We thought the way they were implementing it, it wasn’t only for Jews and it wasn’t for serious dating,” the 31-year-old Tel Aviv-based entrepreneur said. “It seemed like a lot of college kids posting bikini pictures and stuff like that, so we wanted it to be more wholesome and family values and serious dating-oriented.”

The group now has more than 11,000 members. Mark says the administrators are picky about who gets to join — “people who have mutual friends with us have preference, people who have a lot of friends in the group have preference” — in order to foster a sense of community and accountability.

“When people are in a group where they know a lot of people they’re going to behave a lot better and then it’s going to keep the environment positive and loving,” he said.

Online dating isn’t new, of course. There have been some ups and downs, but overall activity on the longstanding Jewish dating app J Swipe has remained the same as pre-pandemic, said founder David Yarus, who added that many people are now for the first time doing video dates since meeting in person isn’t possible.

“What I’m most curious about or interested in is the idea of how comfort in things like video or video first dates and such will change as a result of people experiencing maybe their first time doing a FaceTime date,” Yarus said.

Amanda Doreson, 36, matched with Dan, a fellow Washingtonian, on J Swipe over a month ago. The pair connected after discovering they both like yoga, traveling, museums and have Cavalier King Charles Spaniel dogs.

They have now gone on a number of virtual dates, including checking out an online exhibit about fashion together at the Smithsonian Museum and watching Netflix movies at the same time.