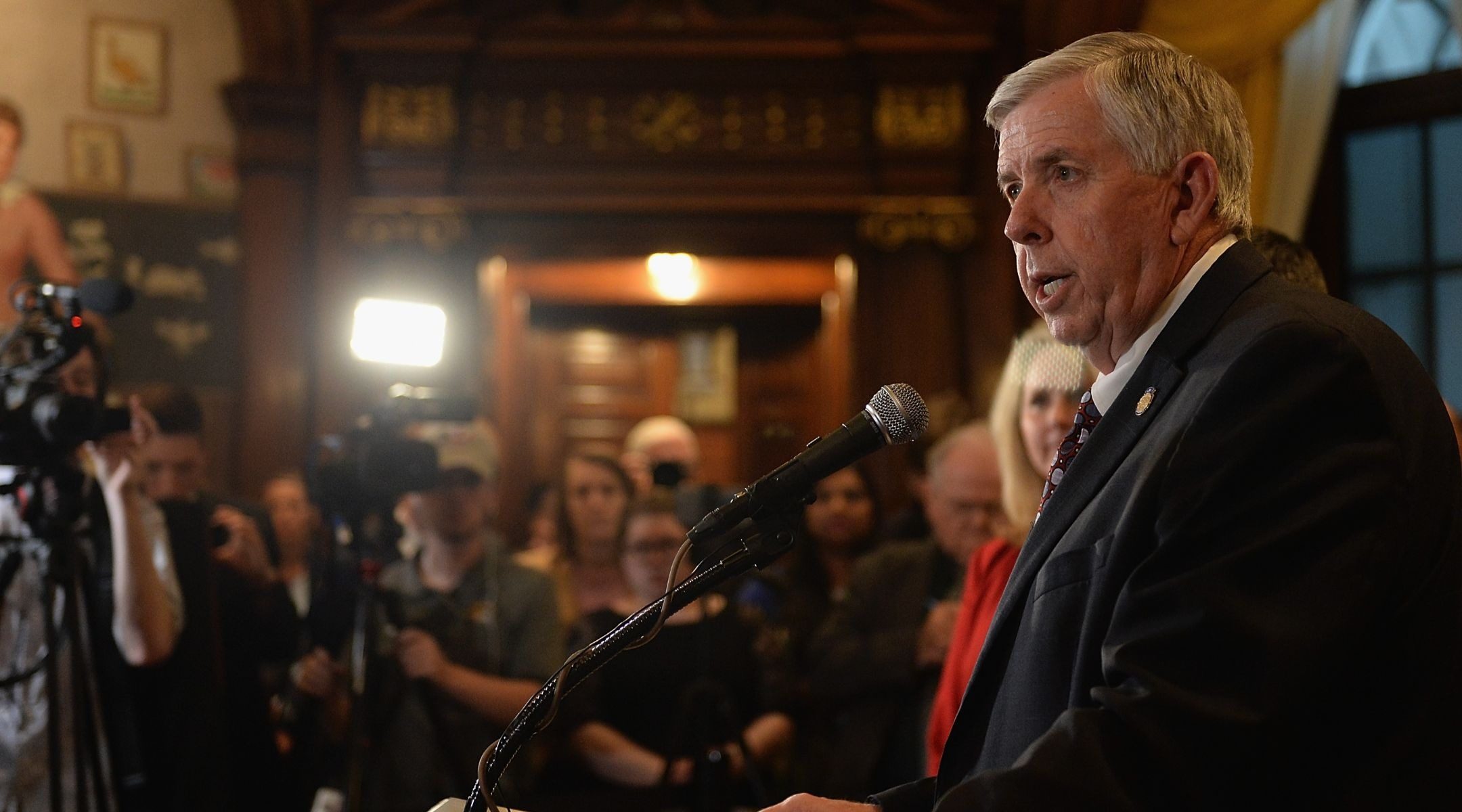 Missouri Gov. Mike Parson, shown in May 2019, said “The absentee ballot is more of a political issue than it is anything.” (Michael B. Thomas/Getty Images)
Advertisement

WASHINGTON (JTA) — Dozens of rabbis in Missouri say they have a solution to the increasingly divisive political issue of whether voting by mail should be allowed because of the coronavirus pandemic.

Most states allow residents to vote by mail for any reason, but 16 do not. With restrictions on large gatherings in place to curb the spread of the disease, longtime advocates for voting by mail say it’s time to expand the option across the country.

But President Donald Trump and Republican governors and legislatures have said expanding the vote-by-mail option would increase the chances for fraud, citing little evidence. (Researchers who study voter fraud have generally concluded that it is rare, though a few high-profile cases have been documented.)

Missouri Gov. Mike Parson is among the Republican officials to oppose expanding mail-in voting. He argued during an April 14 news briefing that it was inappropriate to make changes to voting rules because of the pandemic.

“The absentee ballot is more of a political issue than it is anything,” he said. “This is a Democrat-Republican issue and that’s where this is all headed, is to a political answer and what’s driving behind this force.”

Parson’s opinion didn’t sit right with many rabbis in St. Louis, who cited Torah and rabbinical teachings in a letter encouraging Jewish Missourians to take advantage of a religious exemption clause in the state’s voting rules to cast ballots by mail.

“It is a deeply-held religious belief to remain home on days in which elections are held and that such a belief qualifies one under the Missouri law to vote in any regional, state, or federal elections via absentee ballot,” read the open letter, which was organized by the Jewish Community Relations Council and signed by 35 rabbis from across the religious spectrum.

Their letter was released ahead of municipal elections in the state scheduled for June 2. The balloting had been scheduled for April 7, but was postponed because of the pandemic.

Wisconsin held in-person voting last month after a last-ditch effort to delay or allow balloting by mail was thwarted. In the aftermath, more than 50 voters or poll workers became infected with the coronavirus. The Missouri rabbis said the health risks of in-person voting during a pandemic amounted to a second religious reason to vote by mail.

It’s unclear whether the St. Louis rabbis represent a broader Jewish sentiment around the issue, which is emerging as a hot topic ahead of November’s presidential election. Scientists predict a second, potentially stronger wave of coronavirus infections at that time.

Among the 16 states without vote-by-mail options, only six allow exceptions for religious practice.

Still, the St. Louis JCRC’s initiative is in line with that of a number of national Jewish organizations. This week, the Reform movement’s Commission on Social Action, which sets the social justice agenda for the movement, passed a resolution calling for more accessible voting that included this recommendation: “Expand access to the ballot box including but not limited to universal vote-by-mail, no-excuse absentee ballots, early voting, and new technologies and strategies that maintain the integrity of elections.”

The Reform movement framed the measure  based on Jewish readings that call for communitywide participation in selecting leaders, not as a matter of saving lives.

The Jewish Council for Public Affairs, the public policy umbrella organization, backs greater federal funding to facilitate voting, including “No-excuse absentee voting-by-mail (including a number of options through which to request and return ballots).”