Deep layoffs at Jewish Federations of North America, the organization tasked with helping Jewish nonprofits through the crisis 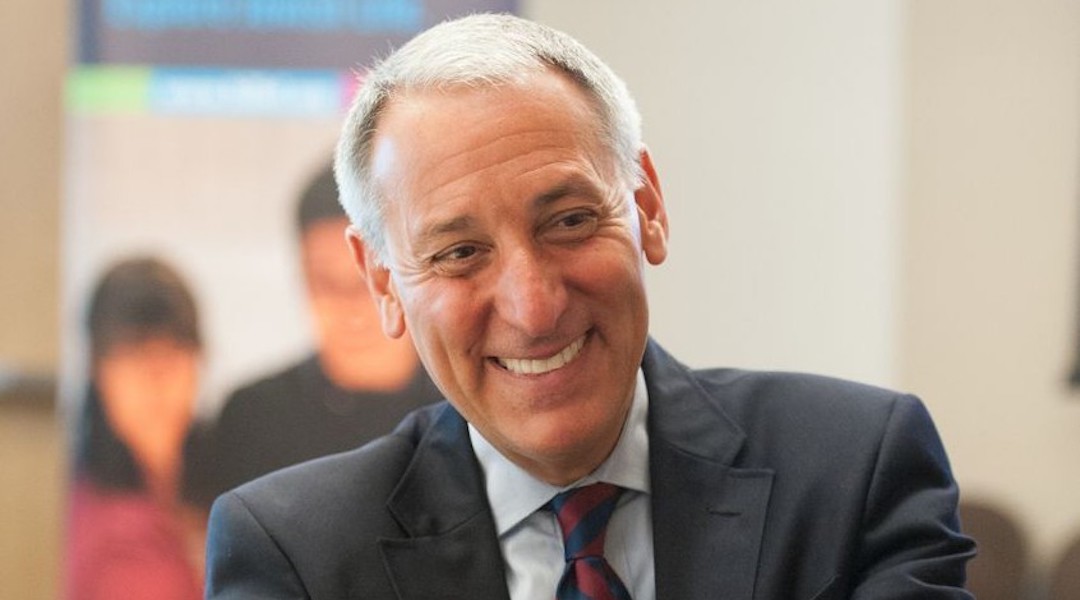 Eric Fingerhut, CEO and president of Jewish Federations of North America, announced layoffs and executive salary cuts in a message to board members and federation executives Wednesday. (Courtesy of Hillel)
Advertisement

(JTA) – The nonprofit organization leading an emergency coalition to coordinate the Jewish response to the pandemic-induced financial crisis has itself slashed its staff.

Jewish Federations of North America, an umbrella group of communal fundraising and programming organizations across the country, announced layoffs and executive salary cuts in a message to board members and federation executives Wednesday.

“We need to redirect resources,” CEO Eric Fingerhut and chair Mark Wilf said in the message. “Accordingly, we have today implemented a plan to reduce the number of full-time employees at JFNA so that we can aggressively pursue the priority needs that have become clear during this emergency period.”

The letter did not specify how many staff members were laid off, or what they do at the organization, and a spokesperson declined to comment on the staff changes.

But multiple sources familiar with JFNA confirmed that the cuts ran deep, with as many as 37 staff members laid off, out of a total staff size of about 180 in the United States and Israel.

The news comes as the work of local federations in gathering and distributing communal funds is perhaps more important than ever but when its sources of income – in the form of dues from local federations as well as direct donations – are imperiled by the financial crisis.

The letter stressed that the umbrella organization would continue to support local federations with fundraising as they acknowledged the difficulty of that work.

JFNA took on that effort just six weeks ago, when it announced that it would lead an emergency coalition to respond to the coronavirus pandemic. The coalition was formed, in part, to help laid-off employees of Jewish organizations, including federations, as budgets tightened.

But the same conditions that imperil local organizations are affecting the umbrella group, according to the letter. Fundraising is challenging, and some long-standing lines of work are not practical during the pandemic.

“The usual ways we have built the financial support for our work are not available to us right now,” wrote Fingerhut and Wilf. (Wilf is a former board member of 70 Faces Media, the Jewish Telegraphic Agency’s parent company.) “Missions, community events and even visits to our donors’ homes and offices are going to be severely limited for the near future.”

JFNA organizes international trips for donors as well as training and conferences for federation staff across the country. With social distancing in place, those activities are likely canceled for the next several months.

Fingerhut also announced that he would take a temporary 10% salary reduction and that seven senior leaders would cut their salaries by 5%. According to the most recent tax filing available, Fingerhut’s predecessor, Gerrold Silverman, earned $634,849 in 2017.

JFNA’s layoffs come as other Jewish organizations begin to shed staff as they reckon with the changed world. Hillel International, the umbrella organization for Jewish student life centers on campus, laid off or furloughed more than 20% of its staff last month.

Local Jewish organizations that rely on service fees have also been hit hard, such as one Jewish community center that laid off all but two of its 178 employees.

JFNA serves as an umbrella organization for 146 Jewish federations and 300 smaller “network” communities, which together employ around 10,000 people, and distributes a total of $3 billion annually for social services and educational programs in Israel and North America.

In their message, Fingerhut and Wilf said they were confident that the groups would together weather the pandemic by innovating.

“When we do, as we are confident, we will, Jewish life will flourish and our response to this crisis will be remembered alongside the greatest moments in the already illustrious history of the Federation system,” they wrote.