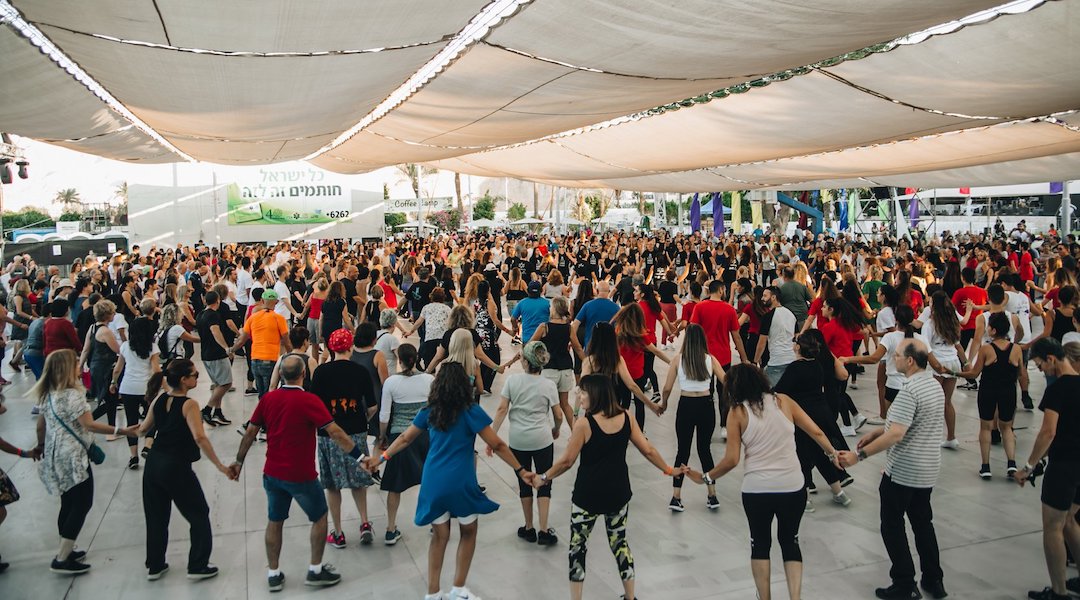 RAANANA, Israel (JTA) – Like all other mass gatherings now, Israel’s Karmiel dance festival, one of the largest of its kind in the world, was postponed.

The annual fest, which takes place at the end of June, draws thousands who take part in one of the country’s oldest passions: Israeli folk dance.

Those in the know say some 200,000 Israelis across the nation attend regular Israeli folk dance, including public and private sessions called harkadot, on beachfronts, sports facilities and more.

To cheer up those disappointed about the Karmiel fest and others around the world, instructors in the U.S. helped set up a 24-hour online folk dance marathon on Zoom from April 13 to 14. A team of 26 instructors shared the lead, depending on their time zones, serving as DJ for up to 1,000 dancers simultaneously in a mosaic of user screens.

“It’s an honor to arrange moments like this,” said Israeli choreographer and instructor Elad Shtamer, who has been broadcasting dance live on Facebook four times a week. “The feeling is amazing when you bring people together and make them feel they’re part of a community, which is the main goal of Israeli dance.”

The 54-year-old Gadi Bitton, one of the leading authorities on Israeli folk dancing, in a typical year leads three huge festivals and gathers some 2,000 “harkaholics” three times a week for sessions in Tel Aviv and Kfar Saba. Hundreds of other instructors hold their own daily harkadot countrywide. The sessions are popular as well in the United States and other countries.

In the face of COVID-19, Bitton and others are moving their sessions online for the time being.

“We have a big global community,” Shtamer said. “It’s super important for them to continue to feel they’re connected. They can’t lose the bond because we want them back when it’s OK to go back.” 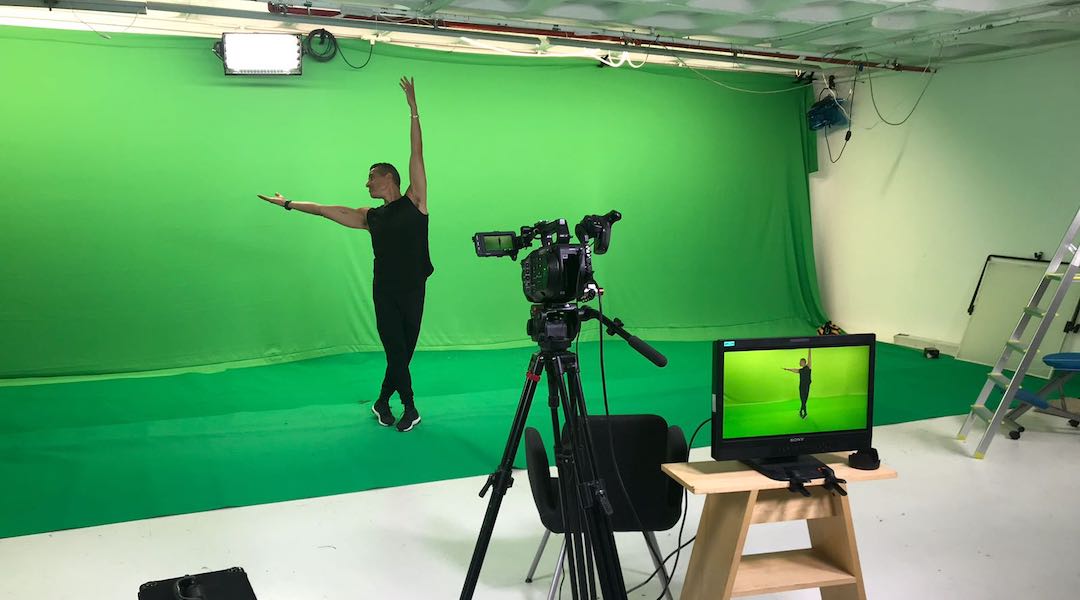 Jews and dancing go way back — when Moses opened the Red Sea waters and the Israelites miraculously crossed it to the other side, they sang and danced in circles to celebrate their freedom. The Bible and Talmud refer to dance events several times. And in 1948, Israelis danced in the streets to celebrate their country’s independence.

Community dances first arose among the halutzim, or pioneers, of the First Aliyah in 1882, and others later brought them from the Diaspora. Major folk influences include the hora, which originally is a Romanian dance form, the temani from Yemenite Jews, the Hasidic from Eastern European Jews and the debka from Arabic folk, as well as Kurdish, Druze, Bedouin, Latin and more.

“We are proud to have something unique, with so many influences,” said Bitton, who is the son of a haredi Orthodox rabbi but left the religious fold. “It’s very catchy all over the world, everyone can fall in love with our folklore in a minute.”

When the coronavirus outbreak started, Bitton quickly put together an online studio called Ulpan Bitnua for the Yeahbit project, which mixes Israeli folk dance, gym and Zumba. Five times a week, his team of quarantined instructors hold morning sessions from their own porches or living rooms. In the evening, online viewers are offered diversified content about Israeli folk dance, including a talk show and lots of dances, of course.

“I feel the responsibility to keep people connected, they need to feel the sense of community. We must stick together until this crazy situation is over,” said Bitton, who serves as head of Tel Aviv University’s dance school of teachers and leads the folk dance section of Israel’s national artistic committee.

There are challenges to the online format, said Levi Bar-Gil, 56, an Israeli folk dance instructor.

“Touching one another is a basic Israeli folk dance thing. Holding hands is the root of what dancing together is about. Smiling, talking, hugging, kissing, talking, everything is connected,” he said.

Every Sunday and Wednesday, Bar-Gil now holds a 45-minute Israeli dance session for kids on the Arutz Habidud, or isolation channel, a newly released online TV broadcast made live by the Hod Hasharon municipality.

But instructors around the world are adapting.

Brazilian-born Andre Schor, 33, is a rising star in the Israeli dance world. His hit dance called “Achi Karov Alaich” has been taught in several countries. Every Saturday online, he has been broadcasting Israeli songs to Brazilian dancers, where he comments live in Portuguese. 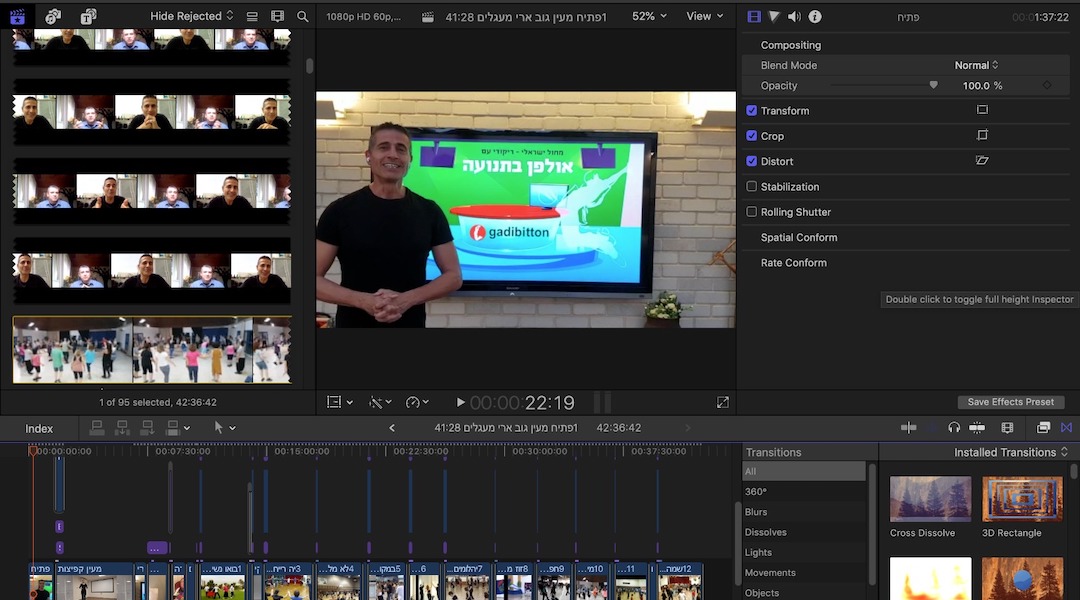 A look at the work behind Bitton’s Ulpan Bitnua online dance studio. (Courtesy of Bitton)

Allon Idelman was raised in Brazil and immigrated to Israel in 2019. He runs a performance group called Olim Rokidim, which gathers 15 dancers who are all immigrants from Brazil, Turkey, France, Mexico, France and Uruguay.

“It’s tough to rehearse over the internet, so we have been keeping the social element alive in our WhatsApp group,” said Idelman, a 42-year-old physiotherapist from Raanana. “We share Israeli dance-related material and celebrate personal dates and achievements.”

When Sarita Blum moved from Rio to Berkeley, California, 11 years ago, finding an Israeli dance environment was among her top priorities. Today she is part of a group called Cafe Simcha, where she learns and teaches.

“During quarantine, when you feel the absence of people, I’ve never felt so connected to them,” she said. “We video call each other all the time. I have been watching and sharing videos of dances that remind me of special moments of my life or special people.”

Blum travels to Israel every year and attends sessions with Bitton, Bar-Gil and several other instructors. She’s used to dancing in online videos because she often sends them to her 8-year-old Israeli granddaughter.

“Israeli dance is everything to me. It gives you a sense of freedom and unity,” she said. “When you hold hands, you feel safe, you feel free. I hope we’ll be all free to dance face to face together once again.”