Brett Kavanaugh’s ‘hypothetical’ question: Can the US require groups to recognize Israel? 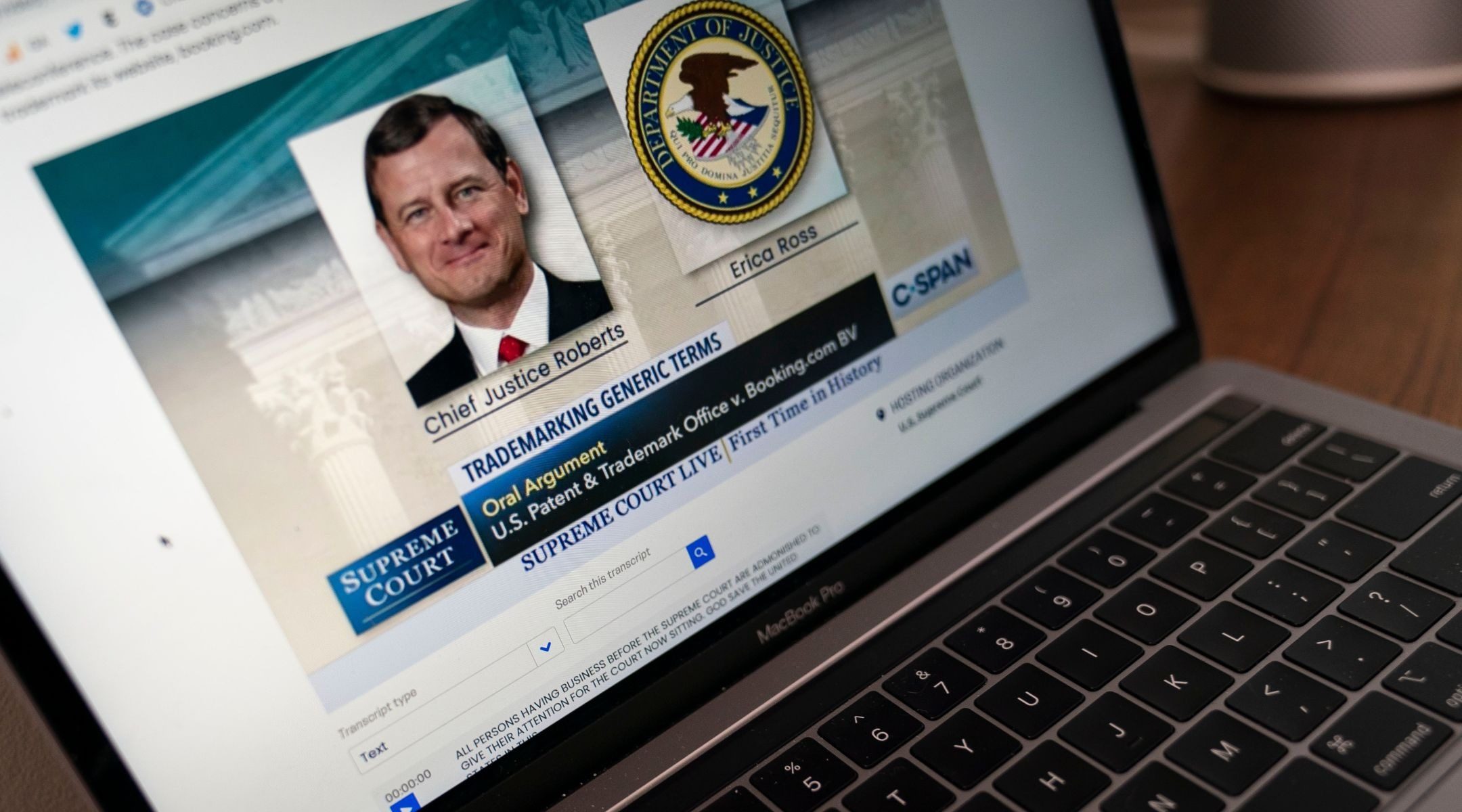 In this illustration photo, Chief Justice John Roberts speaks during oral arguments before the Supreme Court as a case is livestreamed on a laptop, May 4, 2020. (Illustration by Drew Angerer/Getty Images)
Advertisement

WASHINGTON (JTA) — Those tuning in this week for just the second day of live Supreme Court broadcasts were treated to a surprise: In a case about NGOs, HIV-AIDS funding and prostitution, the discussion unexpectedly turned toward U.S. support for Israel’s right to exist.

The case features a group of NGOs that are resisting the Trump administration’s requirement that they explicitly oppose sex trafficking and prostitution as a condition for receiving funds to combat HIV-AIDS overseas from the U.S. Agency for International Development. The NGOs argue that the requirement violates speech freedoms and inhibits their ability to reach those who need their assistance.

During the questioning of the NGOs’ lawyers, Kavanaugh brought up Israel.

“Suppose the U.S. government wants to fund foreign NGOs that support peace in the Middle East but only if the NGOs explicitly recognize Israel as a legitimate state,” Kavanaugh said at Tuesday’s hearing. “Are you saying the U.S. can’t impose that kind of speech restriction on foreign NGOs that are affiliated with U.S. organizations?”

The lawyer for the NGOs, David Bowker, did not equivocate: It would be constitutionally kosher for the U.S. to require such foreign affiliates to recognize Israel.

“I don’t hear that as requiring affirmation of a belief,” Bowker said. “Rather it is in recognizing a fact that the U.S. has established a certain diplomatic relationship with Israel. And the U.S. government gets to say what that relationship is for the United States.”

Kavanaugh’s question could be seen as reflecting the increasingly important role that Israel’s well-being has taken in mainstream conservative political thought over the past two decades. At the same time, Bowker’s response was noteworthy because it comes at a time when many NGOs and their political allies on the left have resisted efforts to link government aid to Israel-related issues.

For years, pro-Israel figures and groups have been working to marginalize groups and individuals who oppose Israel’s existence as a Jewish state. There have been efforts in Congress recently to make U.S. aid to nongovernmental groups contingent on rejecting Israel boycotts. Additionally, some of the parties involved in the arguments have battled over U.S. laws that would inhibit boycotts of Israel or its West Bank settlements.

Some of the groups and figures featuring in this Supreme Court case have been involved in political battles over U.S. policy concerning Israel. The lead defendant is Alliance for Open Society International. Its parent group, Open Society Foundations, founded by the Jewish billionaire George Soros, has funded J Street, the liberal Jewish Middle East policy group that has opposed as impinging on free speech U.S. laws sanctioning Israel boycotters. (J Street opposes boycotts of Israel.)

A group filing an amicus brief in support of the Trump administration is the American Center for Law and Justice, a conservative group. One of the lawyers ACLJ named to the case is Jay Sekulow, a lead private lawyer to Trump during the recent impeachment hearings who founded ACLJ and made it a platform for right-wing pro-Israel activism.

In 2013, the court ruled that the NGOs were protected by speech freedoms. The current argument, initiated by the Trump administration, is whether those freedoms extend to the foreign partners and affiliates of the U.S.-based groups.

Tuesday was the second day that the Supreme Court broadcast audio of its proceedings in real time, a historic switch made by the high court because of the coronavirus pandemic. The hearings had only been available in real time to people inside the Supreme Court’s building, and audio took days to be posted to its website. The justices and the lawyers participated by calling in from remote locations.