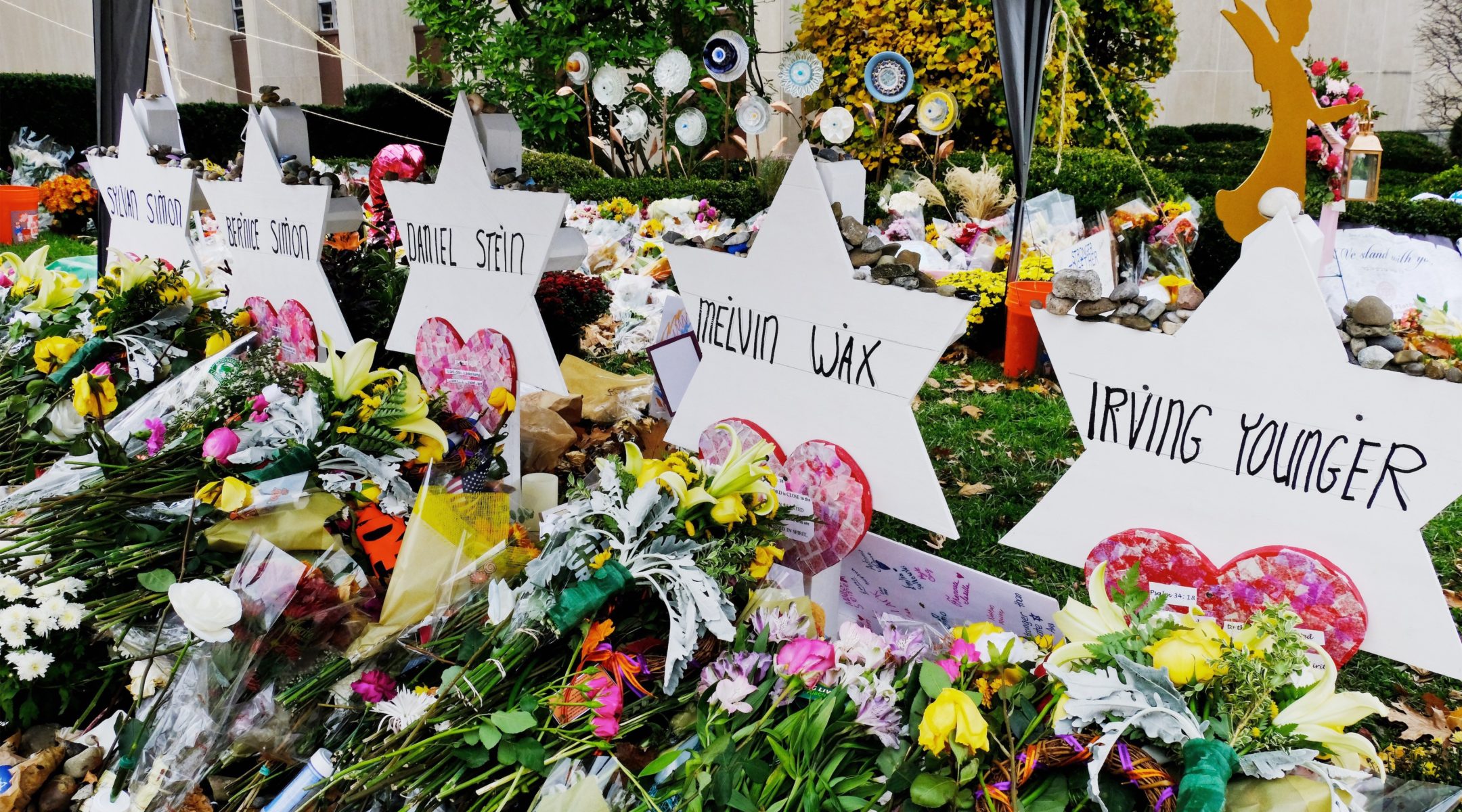 Gregory Zanis' Stars of David are part of the makeshift memorial in front of the Tree of Life synagogue after the October 2018 attack. (Courtesy of Brian Cohen)
Advertisement

(JTA) – The 11 Stars of David appeared in a row in front of Pittsburgh’s Tree of Life synagogue just a day after the shooting there. The stars, glowing in the light of television cameras, surrounded by flowers and candles, quickly became a defining image of the largest attack on a synagogue in American history.

Gregory Zanis, the man who made the stars and drove them 500 miles from his home in Illinois, died Monday of cancer. He was 69.

Since 1996, Zanis built more than 20,000 crosses, crescents and stars for victims of mass shootings and natural disasters across the United States. Over the more than 20 years he worked to build and set up memorials, his simple wooden crosses became a symbol of grief for a country frequently in mourning after mass shootings. 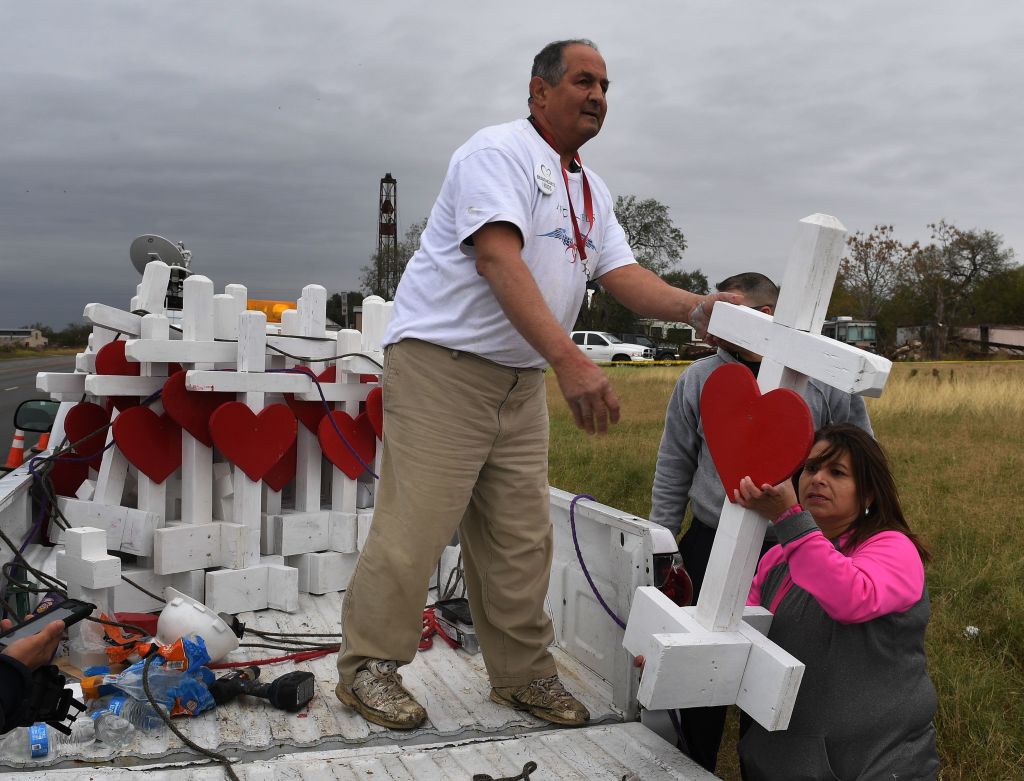 Gregory Zanis unloads his crosses outside the First Baptist Church, the scene of a mass shooting that killed 26 people in Sutherland Springs, Texas, in November 2017. (Mark Ralston/AFP via Getty Images)

Zanis, a retired carpenter and a devout Greek-Orthodox Christian, built his first cross in 1996 after his father-in-law was murdered, according to CNN. After the 1999 shooting at Columbine High School in Colorado, Zanis started traveling to hundreds of sites of mass shootings and natural disasters to deliver the handmade memorials. By August last year, Zanis estimated that he had delivered nearly 27,000 memorials, approximately 21,000 of them for victims of mass shootings. Zanis retired from his memorial project in December.

After his work drove his family into debt, his daughter set up a GoFundMe campaign in August with a goal of raising $100,000. As of Thursday, the campaign had raised over $98,000, with several donations coming from families of victims memorialized by Zanis.

“The 11 Stars of David Greg made for us will forever remain as a reminder of the goodness that thrives despite the acts of people who commit senseless and awful crimes,” Aryeh and Rochelle Sherman, members of the Tree of Life synagogue, wrote in a note accompanying their donation. 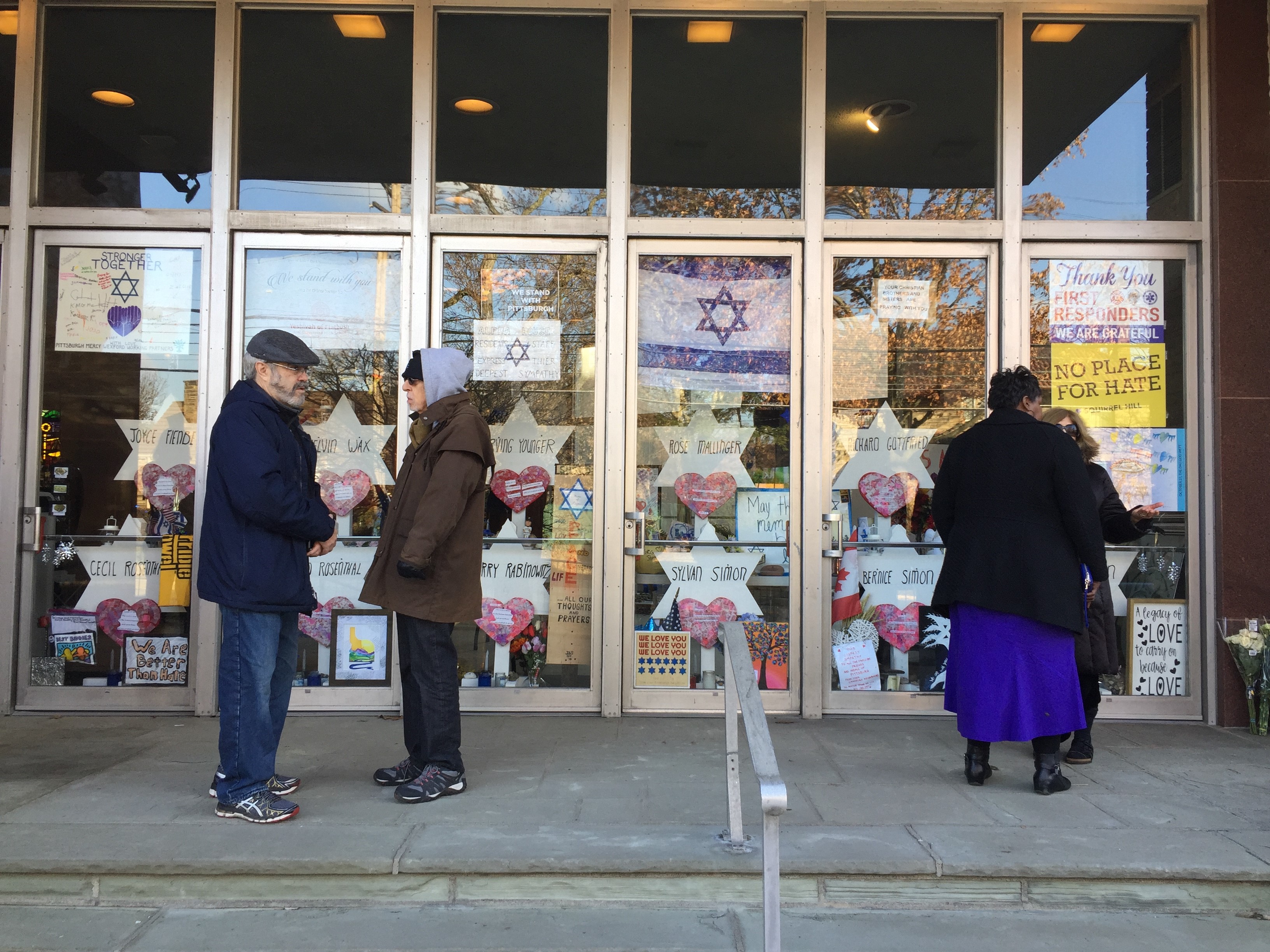 The Stars of David are now visible through the Tree of Life synagogue’s front doors. (Courtesy of Laurie Zittrain Eisenberg)

“He was very concerned that by just rolling in there with these stars, he would be seen as presumptuous or treading on something that should be a Jewish rite,” Laurie Zittrain Eisenberg, a professor at Carnegie Mellon University, told the Jewish Telegraphic Agency.

Eisenberg interviewed Zanis in March for an article she wrote about the memorial objects left at the Tree of Life building in the days and weeks after the shooting. The article will appear in a forthcoming anthology about the attack.

Zanis created memorials for thousands of victims of mass casualty events, driving the crosses all over the country in a pickup truck with the name of his project, Crosses for Losses, emblazoned on the side. When he arrived at the synagogue with the memorials the day after the shooting, he walked around the perimeter of the building looking for the right place to put the stars.

“He kept walking until he knew where God wanted him to put the stars,” Eisenberg said. “He was a deeply believing Christian who really felt that he was doing God’s work by trying to bring comfort and peace to the families of the victims of these awful things.”

When Zanis started carrying the stars from his truck, people standing near the site came over to help him. Soon he had friends and relatives of the victims helping to carry the stars for the victims they knew.

Eisenberg told Zanis in March that the stars were a comfort to the Jewish community in Pittsburgh.

“He seemed very relieved and pleased to be reassured that he had not offended anyone,” Eisenberg said. “And that to the contrary, we were touched.”