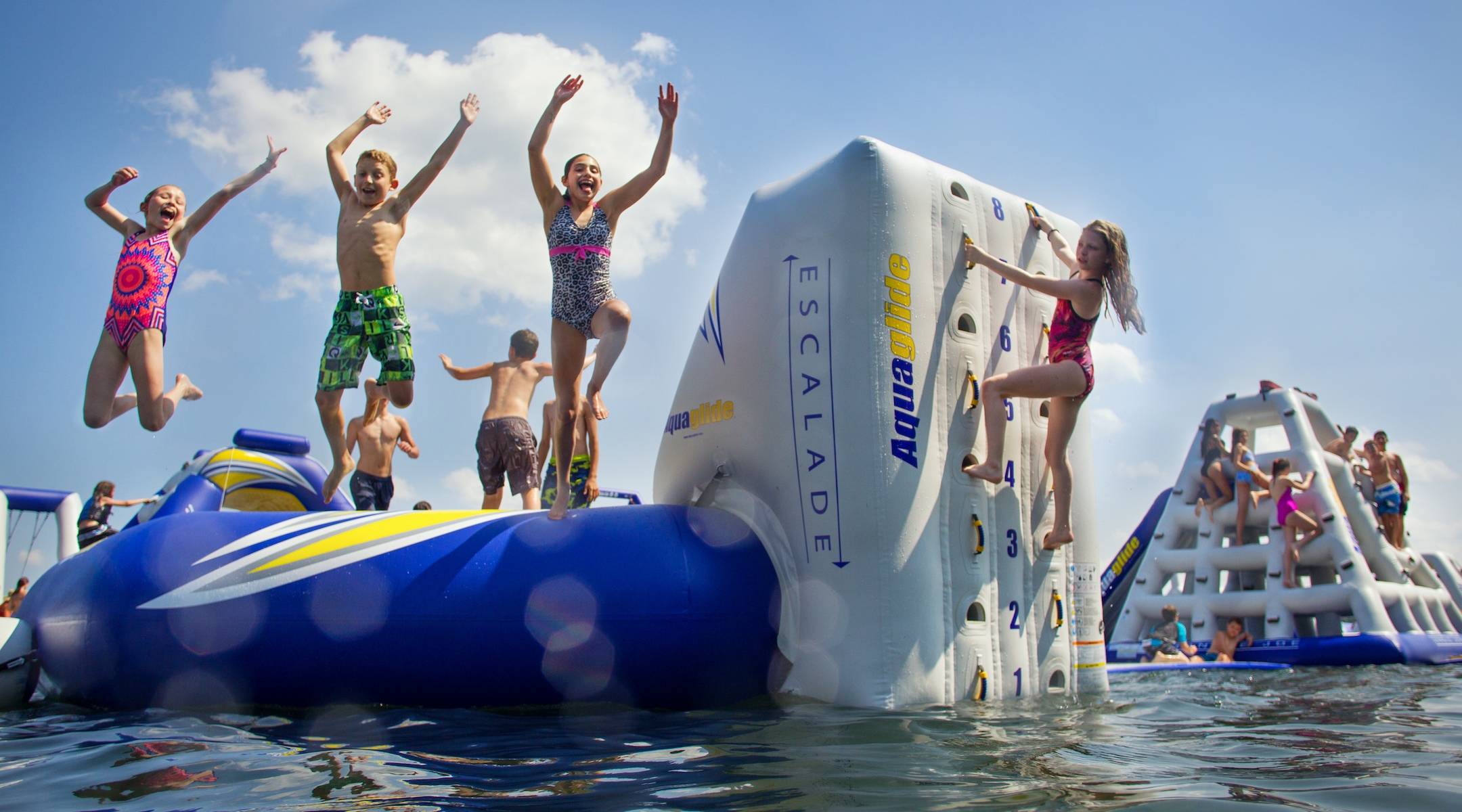 Campers playing on the water at Camp Modin. The camp is perhaps the first Jewish camp in the country to announce, in detail, how it plans to open. (Courtesy of Camp Modin)
Advertisement

(JTA) — Here’s a story that would have been unremarkable until just a few months ago: A Jewish camp is planning to open this summer.

Camp Modin in Maine has announced that it will open July 9 — two weeks later than originally planned — despite the ongoing COVID-19 pandemic. And it has set out a detailed plan to make it happen.

“COVID is something that’s going to be with us for the foreseeable future,” said Howard Salzberg, the camp’s co-director with his wife, Lisa Wulkan Salzberg. “The children have lost in-person learning and they have lost art and they have lost sports and being part of a team. How long is that acceptable for children? We felt we had to do what we could to give the kids a return to normalcy and to mitigate the risk as best we can.”

Dozens of Jewish summer camps across the country have announced that they will not be running this year because of the danger of spreading the disease and the challenge of navigating murky regulations. But Maine has allowed overnight camps to open beginning July 1 and plans to release detailed instructions for them on May 20, and other camps in the state have also said they will open.

Modin is perhaps the first Jewish camp to tell parents definitively that it will open, and to specifically describe how it will keep campers and counselors safe.

Modin plans to test every camper for the disease via at-home test kits before they arrive, and again throughout the summer. The camp has consulted on its measures with epidemiologists and the Centers for Disease Control and Prevention, and will expand its medical staff this summer. And it has laid out a list of measures aimed at ensuring campers’ safety — from abolishing a buffet line for meals to closing communal bathrooms.

An email to parents sent Friday said the camp relied on “facts not emotion” while making the decision, and said the disease “does not adversely affect children and young healthy adults. The hospitalization rate of children with COVID is 1 in 100,000.” It also said that the Kawasaki-like illness affecting young children has affected a minuscule percentage of U.S. kids.

Ron Hall, executive director of an umbrella organization called Maine Summer Camps that works with 145 camps in the state, told the Jewish Telegraphic Agency that Modin will be able to ensure its campers’ safety.

Modin defines itself as an independent, pluralist Jewish camp that practices Conservative Judaism. It was founded nearly a century ago and serves kids aged 7 to 16 primarily from the Northeast. It typically runs for seven weeks, but this summer will have a five-week session and, within that, a 3 1/2-week session. Modin serves around 300 campers each  summer — a number that Salzberg said will stay the same this year.

The camp’s decision runs counter to those made by large American Jewish camp networks, which have announced — or are in the process of announcing — summer cancellations either because their states do not allow them to open or they are afraid that the coronavirus will spread in their camps and endanger campers, staff and others.

Modin’s list of measures to ensure those things don’t happen include holding campwide gatherings in large open areas, where groups of campers can socially distance; serving meals table by table rather than having campers line up at a buffet; using only disposable plates and silverware; and closing communal bathrooms.

Staff will be tested before they arrive and will be at camp “well in advance of the campers,” according to the email to parents.

The email encouraged campers to arrive by plane, possibly by charter flight arranged by the camp, whereupon camp staff would pick them up at the airport. Should parents drive their kids to camp, they will have to drop them off at a staging area outside the camp gates. Buses or vans will be available only from the nearby city of Boston. International staff also will be working at the camp.

Also, the email said the camp would consider sticking to bunk activities for the summer and smaller outings as opposed to full camp trips to outside locations like an amusement park.

Is social distancing possible in the freewheeling atmosphere of camp?

Salzberg said that kids would be safer in the contained environment of camp than they would be running around a public park or beach. Even so, he said, the camp will have to impress on kids that they can’t be nearly as uninhibited as they are in a normal year, and will have to emphasize that no plan is foolproof.

“We have said to families, no matter what procedures we put in place, there are no guarantees,” Salzberg said. “You’re going to have to have an understanding with your campers and staff that it’s going to be a different summer. I don’t think there’s a parent that can guarantee you that their child, from now until they go back to school, there’s going to be no slip-ups.”

Salzberg added that if everyone tests negative for COVID-19 multiple times after a few weeks, the rules could be relaxed. He even floated the idea of a socially distanced bar mitzvah party for the kids who had to celebrate the coming-of-age ceremony virtually this year.

The camp has managed outbreaks of other diseases in the past, Salzberg said. Most recently, in 2009, more than 130 Modin campers were infected with swine flu. It also experienced outbreaks of measles in 1992 and meningitis a few years later.

Salzberg recognizes that the risk of exposure to COVID-19 is more dire for those who are older than their 20s — a group that includes himself, his wife and the camp social worker, who is in her 60s and has been working at Modin for decades. Still, she told Salzberg that she was coming back.

“We’re the ones that took the risk on opening,” Salzberg said of the older staff members. “They were given the choice to come or not come, and they’re all in.”