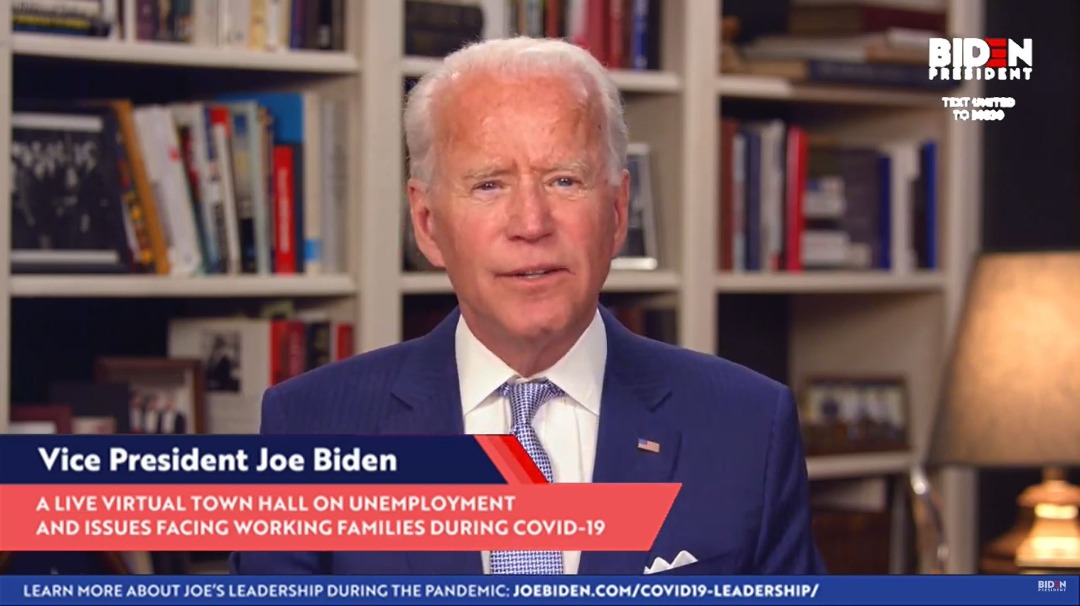 In this screengrab from Joebiden.com , Democratic presidential candidate and former U.S. Vice President Joe Biden speaks during a Coronavirus Virtual Town Hall from his home in Wilmington, Delaware on April 08, 2020. (JoeBiden.com via Getty Images)
Advertisement

WASHINGTON (JTA) — Joe Biden said that as president he would reverse Trump administration policies that have led to Israeli plans to annex parts of the West Bank.

“I do not support annexation,” the presumptive Democratic presidential nominee told Jewish donors on Tuesday during a fundraising webinar. “I’m going to reverse Trump administration steps which I think significantly undercut the prospects of peace.”

Biden, the former vice president, was referring to the Trump administration’s vision for peace released earlier this year that would allow Israel to annex parts of the West Bank. As a result, Prime Minister Benjamin Netanyahu said he plans to extend Israeli sovereignty to areas of Jewish settlement as early as July 1.

Biden’s aides have said that he opposed annexation, but this was the first time Biden himself expressed it, and that he pledged to undo Trump administration policies. He has said elsewhere that one policy of President Donald Trump he would not change is moving the U.S. Embassy to Jerusalem.

At another point in the webinar, Biden said Israel needs to “stop the threat of annexation and stop settlement activity because it’ll choke off any hope of peace.”

Biden repeated a pledge not to leverage assistance to Israel to influence its policy. Some on the Democratic Party’s left have pressed party leaders to adopt that policy.

“I’m not going to place conditions on security assistance given the serious threats they face. I think it would be irresponsible,” he said.

Biden said he would resume assistance to the Palestinians, but comply with laws passed by Congress that withholds aid unless the Palestinian Authority ceases payments to imprisoned Palestinians who have killed Israelis and Americans.

Biden said he was an advocate during the Obama administration for pressing the Palestinians for accountability at times that others in the administration sought to pressure Israel. Chatting with Dan Shapiro, the former U.S. ambassador to Israel and a member of the Obama National Security Council, he recalled a meeting in which others present said “‘we’ve really got to take on the Israelis for doing A, B, C and D’ and I said ‘yeah, but what about the Palestinians?'”

He told Deborah Lipstadt, the Holocaust historian who joined the webinar to probe Biden on his views about anti-Semitism, that at times criticism of Israel on the left, including his party’s left, could cross into anti-Semitism.

“We have to condemn it and that’s what I’ve got in trouble for doing,” he said. Criticism of Israel is legitimate, but “too often that criticism from the left morphs into anti-Semitism, blaming Israel for all the wrongs in the Middle East, questioning Israel’s right to exist.”