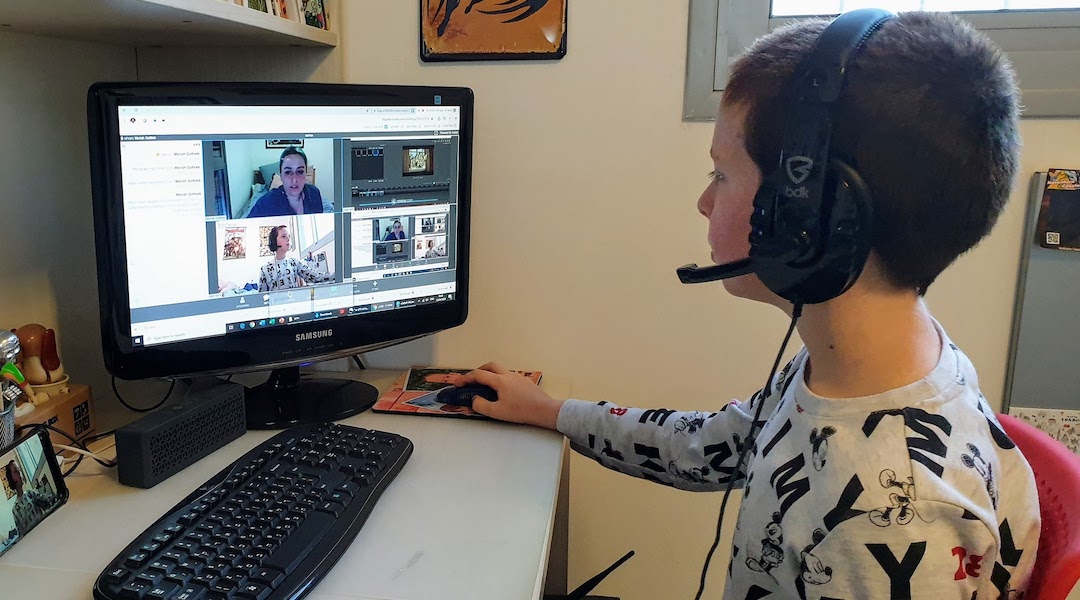 (JTA) — Ask Jewish summer camp directors about the hardest part of designing a virtual camp experience for the COVID-19 era and they’ll laugh.

Then they’ll say that all of it is hard. That they’ve never done anything like this before. That camp on a screen isn’t really camp.

But with kids unable to run around freely without risking infection, Jewish camps by the dozen have responded by canceling their summer seasons. And now some of them are going virtual.

“It’s not camp,” said Elyssa Gaffin, director of Young Judaea Sprout Brooklyn, a day camp that’s offering two different virtual “summer experiences” beginning next month. “It’s challenging, if not impossible, to really create what makes camp camp in a virtual environment. But we still think there’s a lot you can do.”

As camps across the country decide not to open their grounds for the summer, many instead are asking parents to open their laptops. What they’ll find on their screens is a daily schedule of arts and crafts, games and even sports, all run by counselors and delivered by videoconference. Even campwide ceremonies, singalongs and talent shows will be reimagined as virtual experiences enjoyed from the comfort of home.

“This is the real world we live in now,” said Julie Finkelstein, the director of leadership development at the Foundation for Jewish Camp, which is helping to support camps going virtual this summer. “Virtual is our real world. This is our reality and we need to now create really magical, deep, meaningful experiences in our new reality.”

Some 21 American Jewish camps have already signed up for Clickto.camp, an Israeli startup that built a platform for summer camps to operate online. Founder Dotan Tamir, who also runs a technology summer camp in Israel called Big Idea, began running online sessions in March to see whether kids would be into attending camp from home. He said the response from parents was overwhelmingly positive.

Tamir acknowledges that technology camps, where kids learn coding and other technical skills, lend themselves more naturally to virtual sessions. But kids seem to take the idea of virtual camp seriously. Tamir remembers one participant in an online session asking his counselor if he could leave to go to the bathroom.

“I did not expect kids to feel that way,” Tamir said. “It’s his bedroom, and he can go to the bathroom. But he asked his counselor because he felt like someone’s supervising, and he’s part of a group, and this is real.”

Clickto.camp, which launched its platform last week, runs on a videoconferencing service called Unicko. Participating camps have two options: They can have their own staff run programs virtually or they can pay for ready-made programs — dance, martial arts, cooking and so on — taught by outside instructors.

Campers set their schedules in advance and then click on a link that takes them through all the day’s sessions. The company charges camps $1.99 per camper per day to use its platform.

“We have electives where you’re moving in front of your screen — fitness, sports activities that have you move,” said Aaron Hadley, executive director of Camp Ben Frankel, a Jewish overnight camp in southern Illinois that will use Clickto.camp this summer. “Theater arts can still have a kid moving around and acting a piece out rather than just staying sedentary.”

Ben Frankel is even trying to replicate the unstructured time that sets camp apart from the rest of the year. Campers will still be organized into cabins and have their own videoconferencing rooms where they can schmooze, play games and decorate a virtual wall.

Organizers aimed for a similar feel this month at an annual conference for Jewish camp staff run by the Foundation for Jewish Camp. The virtual conference was a kind of trial run for the online camps many participants will be running this summer. Participants organized into virtual cabins, had informal Zoom rooms where they hung out and performed many Jewish camp standbys, from song sessions to Israeli dancing to daily prayers (morning or evening, depending on the time zone).

“It’s just showing them that not all is lost,” Finkelstein said. “Actually, we can have a really silly time over the screen.”

The virtual programs fall far short of actual camp experiences. Singalongs are impossible, as video technology lets only one person speak at a time. Song sessions will generally involve a song leader singing alone with everyone else on mute.

Sprout Brooklyn plans on running baseball activities for its campers, but those will involve practicing drills at home rather than actual games. And while videoconferencing rooms will be open for lunch breaks, kids won’t always be able to break off and have more intimate conversations.

“We acknowledged many, many times that this was not our ideal and this was not what we had hoped for,” Finkelstein said, adding that “If Zoom could develop one thing for the Jewish musical world, it would enable people to sing together.”

Ben Frankel and Sprout Brooklyn are confident from their conversations with parents that some kids will enroll. Ben Frankel usually has around 100 kids in third to 11th grade, while Sprout usually has 300, from pre-K to fifth.

Ben Frankel will be charging $199 per week for the camp, as opposed to $1,000 for a normal summer. Sprout has not determined its pricing yet, but Gaffin said the goal is just to break even.

“I don’t know any camps that are looking at virtual camp as a cash cow,” she said.

So what’s the hardest part of this whole undertaking?

Gaffin said she doesn’t know. Maybe the whole thing. But in spite of that, she feels ready.

“Something at this scale has never been done before,” she said. “But one of the things that makes camp camp is the ability to do a lot of problem solving and crisis management and pivoting. So if anybody has the skill set to make it work, it’s definitely camp people.”