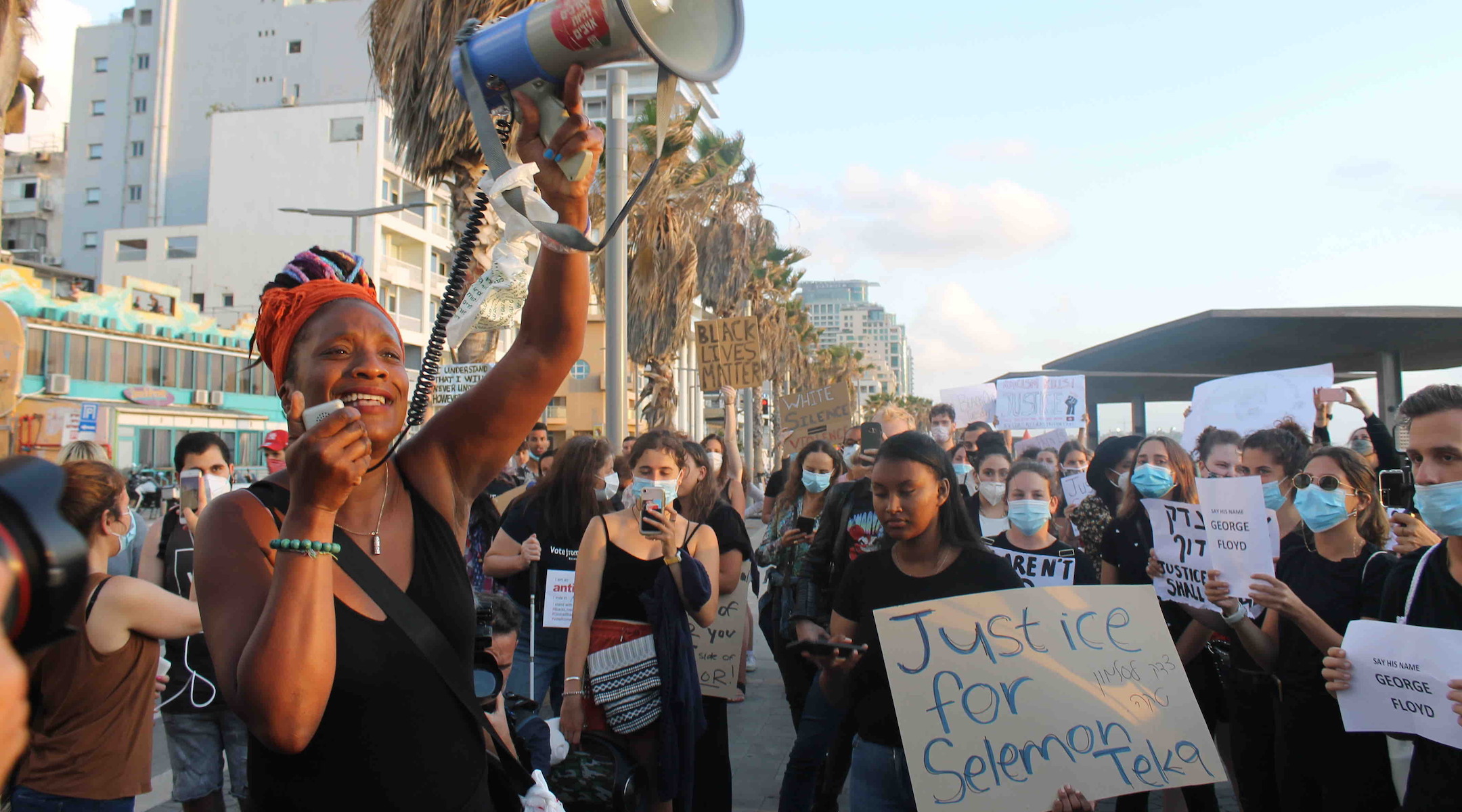 Chaya Lev addresses the crowd at a protest in Tel Aviv against the killing of George Floyd, June 2, 2020. (Sam Sokol)
Advertisement

TEL AVIV (JTA) — As Kielahtiel Barton stood across from the former American embassy here, on a sidewalk next to a downtown beach, a large crowd around her chanted slogans calling for racial equality.

“Why am I here? I’m black as hell and my skin color is the first thing that people see about me, especially in Israel,” Barton said.

A Jewish immigrant from the New York City borough of Queens, Barton was among the hundreds of Israelis who took to the streets of Tel Aviv on Tuesday evening to protest the killing of George Floyd last week.

The protesters — a mix of Israelis, including Ethiopian Jews and African-American immigrants — compared the situation in Israel to that in the United States, reading out lists of the names they said were victims of police brutality. They screamed slogans like “No justice, no peace” and “Solomon Tekah, the last victim” — a reference to the death of an Ethiopian-Israeli teenager shot by an off-duty police officer last year. 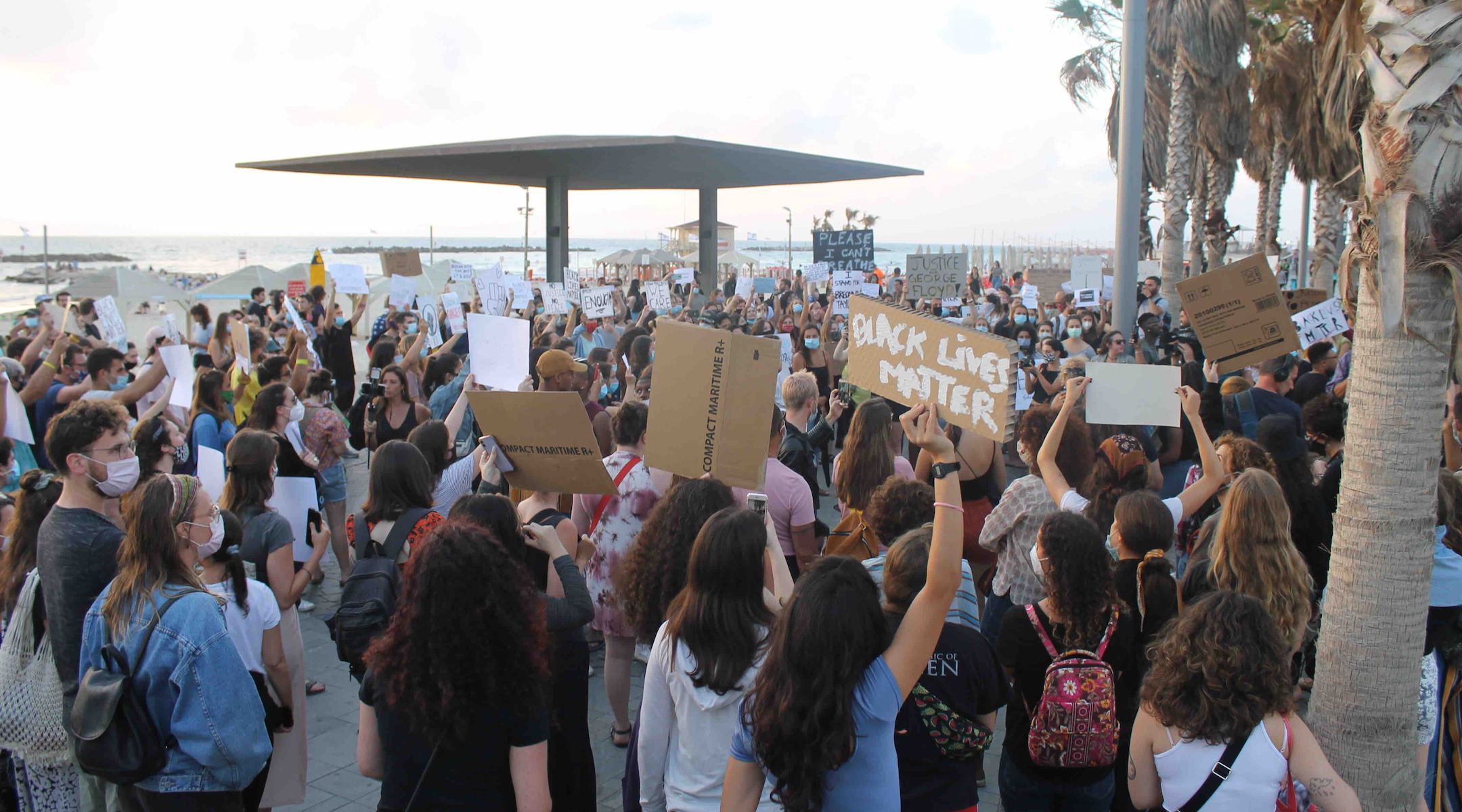 Hundreds showed up to the protest outside the former American embassy in Tel Aviv, June 2, 2020. (Sam Sokol)

They also called for justice for Iyad Halak, 32, an autistic Palestinian man who was shot and killed by Israeli Border Police on Saturday morning. Defense Minister Benny Gantz has apologized for the shooting and one of the officers involved was placed under house arrest. A second was released from police custody and placed under restrictive conditions.

Many of the African-American immigrants who spoke at the rally described a sense of helplessness in the face of violence, but also of a resolve to push for change. Barton said she was scared for her siblings back in New York, all of whom had joined the protests there, which in some areas had turned violent.

Her sentiment was repeated by others with family in the U.S.

“I want you to pay attention to how f****ing long this list of names is that we are about to read,” organizer Gavriel Chichester, an African-American Jewish man originally from Washington, D.C., told the demonstrators through a megaphone. “Imagine moving across the world, making aliyah to Israel and being worried halfway across the world if your little black brothers are gonna die at home and you can’t go f***ing see them.”

“Matter,” the crowd chanted back.

Floyd’s death while in police custody in Minneapolis hit many black Israelis hard. Last summer, tens of thousands here took to the streets to protest Tekah’s death. His killing came six months after Yehuda Biadga, 24, a mentally ill Ethiopian Israeli, was shot and killed by police who say he charged an officer while brandishing a knife. His death led to demonstrations throughout Tel Aviv.

In May 2015, similar protests erupted following the beating of an Ethiopian-Israeli soldier by two police officers that was filmed and widely distributed. Those protests devolved into riots in which police officers fired stun grenades, water cannons and tear gas to disperse the demonstrators, who threw rocks and glass bottles at police and also vandalized some storefronts.

More than 144,000 Jews of Ethiopian descent live in Israel. The Ethiopian community has long complained of racial discrimination, especially at the hands of law enforcement. Ethiopian soldiers are sent to military prison at a disproportionately higher rate than other groups and are arrested in civilian life at a higher rate than the general population. 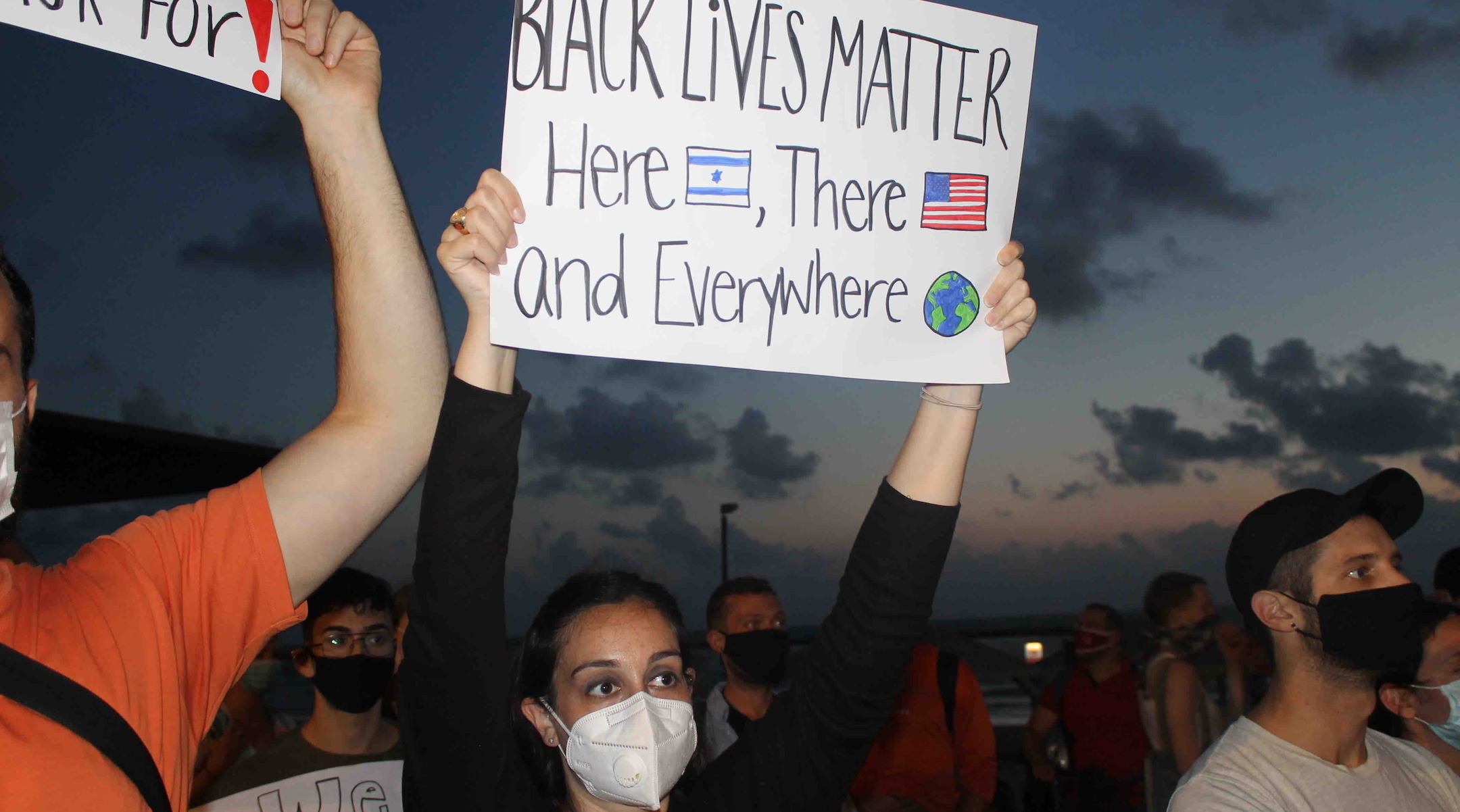 “We see this daily in Israel,” said protester Masagnu Amsalo, an Ethiopian Jew. “We couldn’t sleep when we saw this police racism. It’s here and in the U.S. Yesterday it happened in the United States and tomorrow it’ll be here in Israel.”

“I felt so powerless and couldn’t sleep for three days,” Lev said. “I’m just here to get justice for this senselessness.”

“You can not like me, just don’t shoot me,” she added.

African-American Israelis, Ethiopian Israelis and allies protesting against police violence in Israel and the US outside the US Embassy annex in TLV pic.twitter.com/MWi3u3pQBC

Floyd’s death, the latest in a series of killings of unarmed black men by American police, has sparked nationwide protests over what many see as deep-rooted institutional racism in the United States.

In Tel Aviv, many of the protesters, while not black themselves, said they felt morally obligated to come out and make a statement. They spread word of the grassroots rally via social media.

Benji Lovitt, an American-Israeli comedian, said he felt it was his “civic responsibility” to protest the “awful” things going on in the U.S.

“I grew up as a Jew in America spending so much time following the news in Israel,” he said, “and it’s strange to be here looking back at America and worrying about the future of that country.”