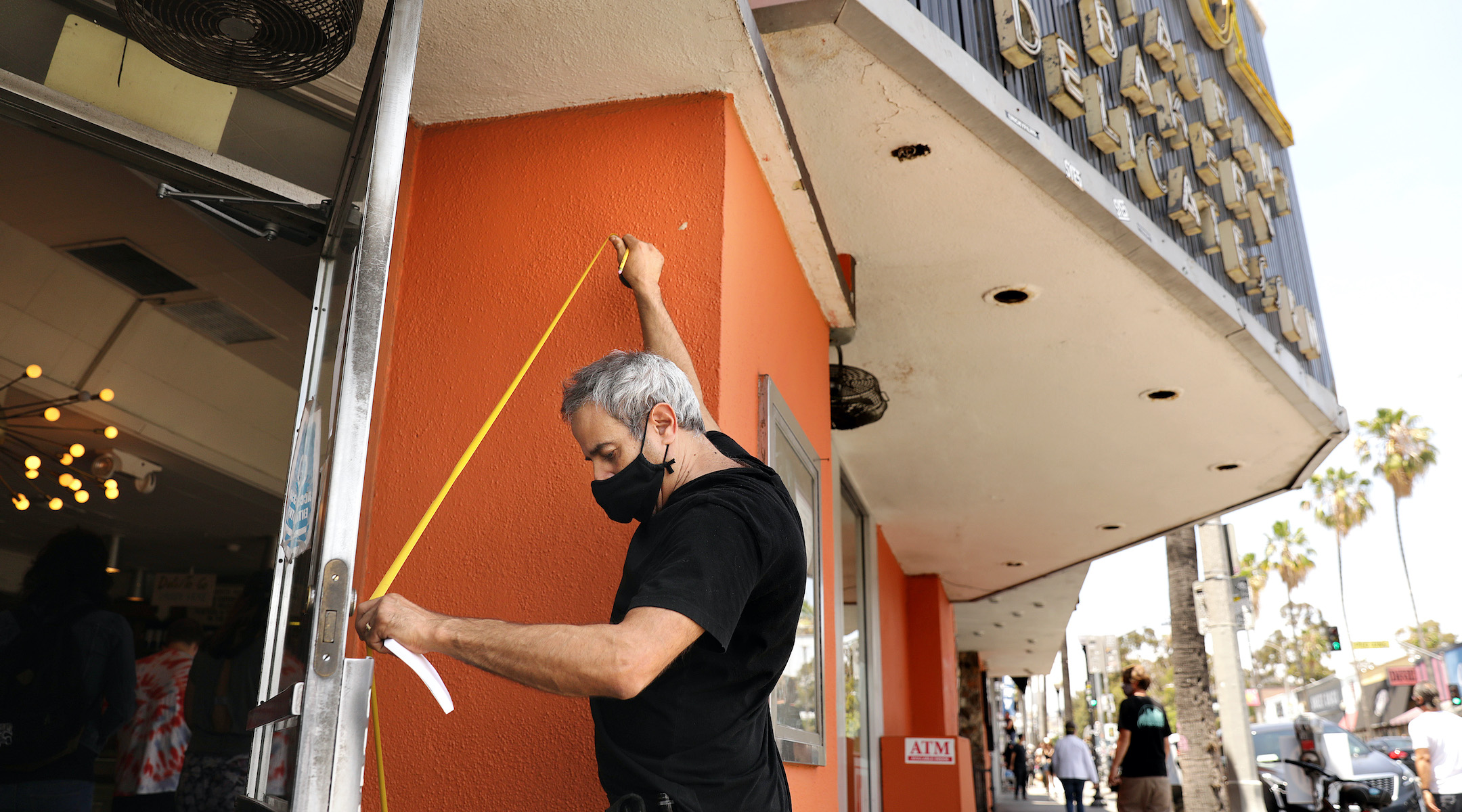 Marc Canter measures the doors and windows of his famed Canter's deli in the Fairfax area of Los Angeles in case he needed to board them up, May 31, 2020. (Christina House/Los Angeles Times via Getty Images)
Advertisement

LOS ANGELES (JTA) – Graffiti on the walls of a synagogue read “Free Palestine” and “f*** Israel.” A statue of Raoul Wallenberg, the Swedish diplomat who saved thousands of Hungarian Jews from the Nazis, was smeared with anti-Semitic slogans.

Along with the synagogues, Jewish-owned buildings and stores were defaced, in several cases also with anti-Semitic graffiti. The businesses were looted, too.

This city’s Fairfax district, a heavily Jewish area that has been continuously represented by a Jewish city councilman since 1953, was hit particularly hard by the kind of vandalism that has struck major cities following the killing of George Floyd in police custody.

“The attack on our community last night was vicious and criminal,” Paul Koretz, the district’s current city councilman, said in a statement Sunday. “As we watched the fires and looting, what we didn’t get covered were the anti-Semitic hate crimes and incidents. Under the guise of protests, some advanced their anti-Semitic agenda.”

The anti-Semitism included the above messages on Temple Beth El and similar graffiti on the nearby Baba Sale Congregation.

Graffiti was spray-painted on the walls of Congregation Beth Israel in the Fairfax district of Los Angeles, May 30, 2020. (Lisa Daftari/Twitter)

Across the street from Beth El, the Kosher Mensch Bakery and Kitchen and the Jewish-owned clothing store Go Couture were destroyed. Stores on the fashionable Melrose Avenue, on the district’s northern border, also were damaged, as were multiple Jewish institutions in the area: Congregation Beth Israel, Congregation Tivereth Avi/Morasha Educational Centre, Shaarei Tefilah synagogue and the Shalhevet school for girls, according to Aram Goldberg, vice president of the Jewish Federation Council.

The Jewish Free Loan Association is now offering interest free “looting loss loans” of up to $18,000 for damaged or destroyed businesses.

Untouched in the mayhem was Canter’s deli, a hardy cultural landmark that has survived since 1931. The 24-hour eatery, famed for its prize-winning waffles and Jewish deli sandwiches, was spared any damage thanks to a strategy honed by owner Marc Canter and his staff during the 1992 Rodney King riots.

In an interview with the Jewish Journal of Los Angeles, Canter explained that he and his employees posted a sign expressing solidarity with the Black Lives Matter movement. Perhaps even more persuasive, the deli offered free bottles of water to both protesters and police, to the tune of 25 cases. In addition, the deli allowed the protesters to use its restrooms and order food.

“We support free speech and anything that’s peaceful,” Canter said. “There are people coming out of the woodwork that are trying to blend in with the real protesters that are just troublemakers looking to take advantage of the situation and not very interested in what is being protested.”

A vandalized police car during the protests in Los Angeles, May 30, 2020. (David McNew/Getty Images)

Still, Canter said he understood why the protests took a violent turn.

“Tensions have been very high since COVID-19 and a lot of people are out of work, so it’s hard to do peaceful demonstrations with so much going on at the same time,” he said.

The Fairfax district once was the Jewish center of Los Angeles. The first Jews who arrived in the mid-19th century settled on the east side of the city, but in the aftermath of World War II, returning soldiers preferred Fairfax. In the following decades, an influx of Russian Jews and Israelis added diversity to the predominantly Orthodox community. By 1953, some 60% of the district’s residents were Jewish, according to Pini Herman, a former research director for the Jewish federation.

But as Jewish residents prospered, they moved on to plusher residences in Beverly Hills and more affordable ones in the San Fernando Valley, while the Orthodox reestablished themselves in southern Los Angeles.

Some 600,000 Jews are believed to live in Los Angeles, which would make the city the second largest Jewish city in the world, after New York but ahead of Tel Aviv.