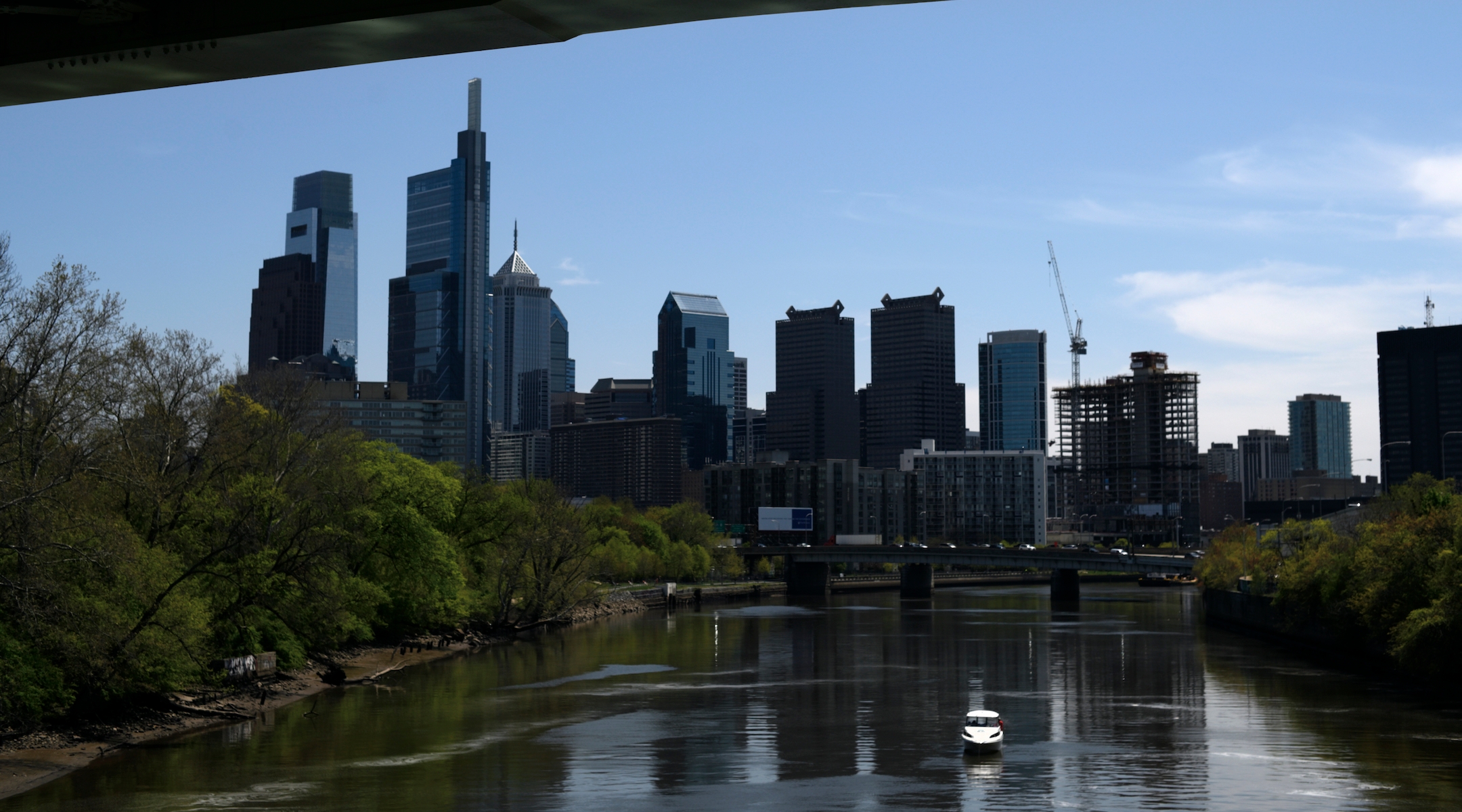 A view of the Schuylkill River and the Philadelphia skyline, April 28, 2020. (Bastiaan Slabbers/NurPhoto/Getty Images)
Advertisement

PHILADELPHIA (JTA) — Before the social unrest erupted here in the wake of the killing of George Floyd, Philadelphia struggled mightily with the coronavirus pandemic as one of the nation’s largest hot spots.

Like elsewhere in the country, this meant closing the city’s theaters, performing arts venues and Jewish institutions beginning in mid-March. Even with some places, like outdoor camps and food trucks, set to reopen soon, the city is still dealing with the repercussions.

Here are some of the Jewish musicians, artists, clergy and others in the Philadelphia area who are finding ways to stay creative during this unprecedented time.

A creative shul gets more creative 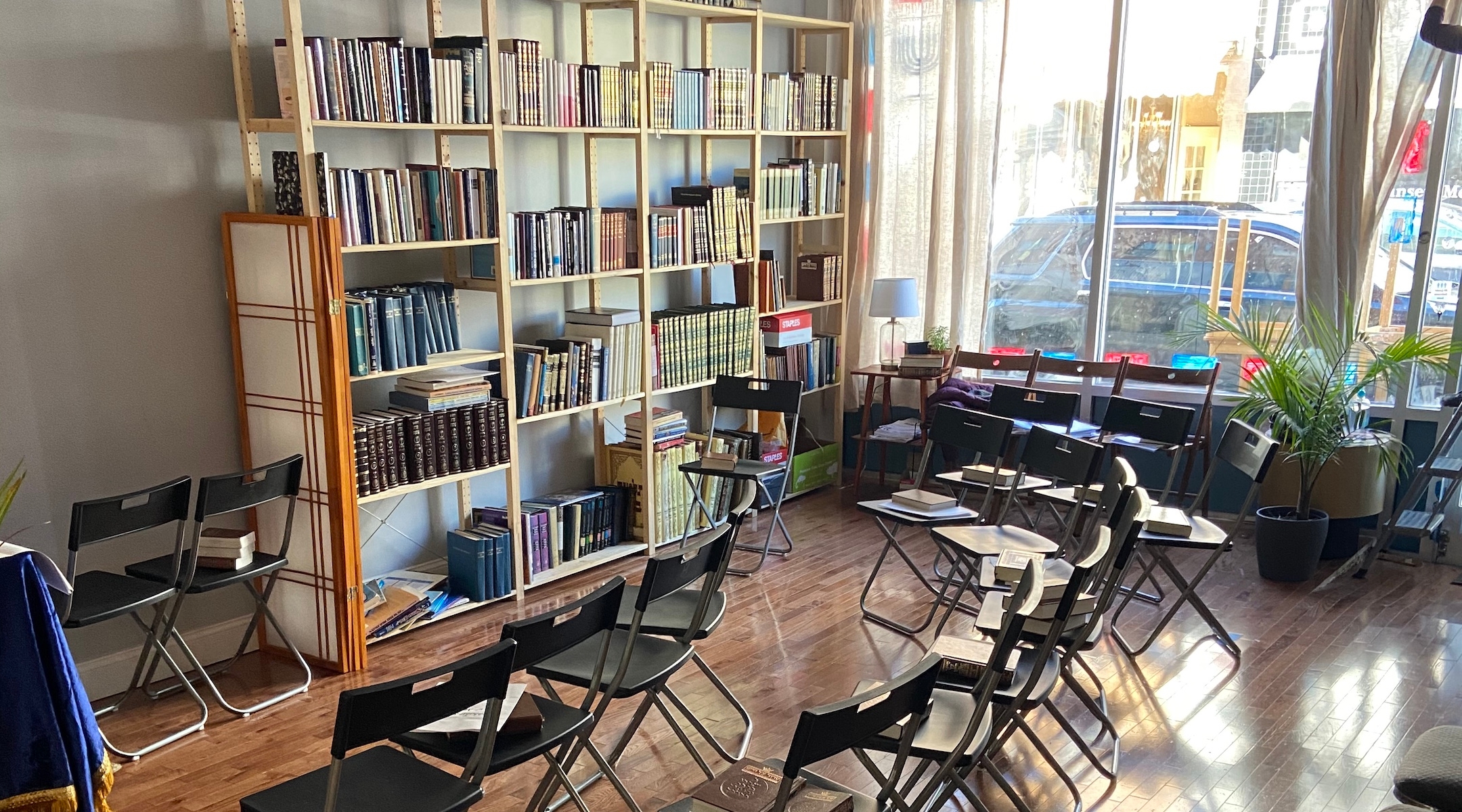 Rabbanit Hadas Fruchter is a pioneering female Orthodox spiritual leader. Ordained in 2016 by the Orthodox Yeshivat Maharat, Fruchter established the South Philadelphia Shtiebel congregation less than a year ago in a neighborhood storefront that was previously the home of a scooter shop.

As she began navigating how to handle the pandemic for her congregants, she was diagnosed with COVID-19 herself.

Some of her family members and members of her community contracted the virus as well. She recovered, as did her mother, who was hospitalized.

The Shtiebel stopped in-person programming at its physical building on March 12, earlier than most Philadelphia institutions. However, Fruchter made clear to her followers that the institution wasn’t “closed.”

In addition to a full schedule of online programs and events, Fruchter has been teaching every day. And not only has there been more time, but she feels the “importance has increased” of having one-on-one calls with members.

“On the one hand there’s programs,” she said, “but on the other there’s a grieving Jewish community that needs support.” 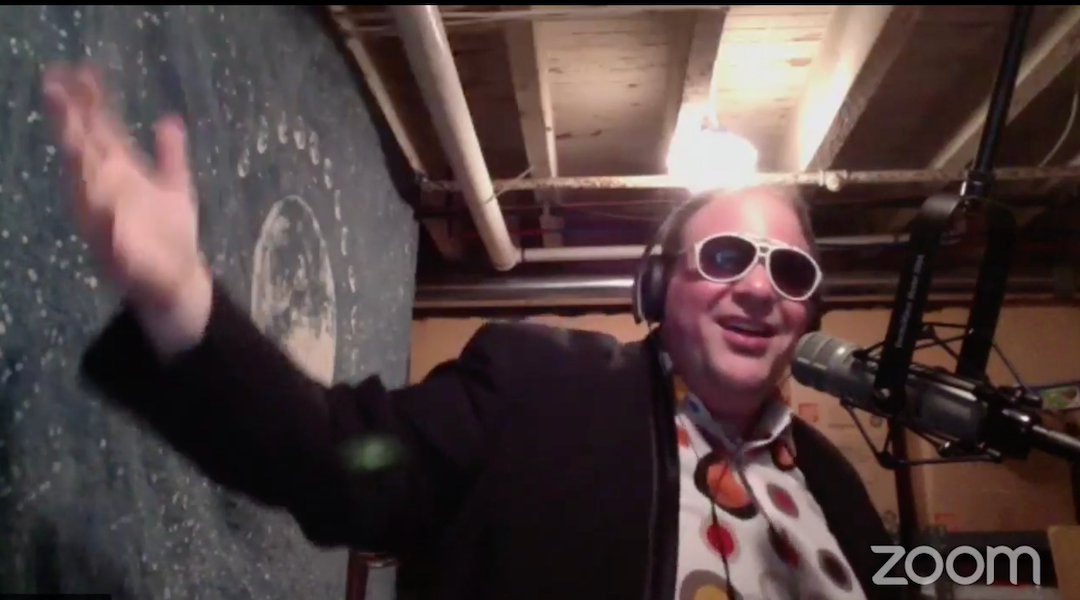 Dan Blacksberg, a Philadelphia-based trombonist and composer, is known for fusing traditional klezmer music with other genres of music — for instance, he was part of Deveykus, the world’s only Hasidic doom metal band.

He also had a band called Electric Simcha, which fused “early-80s hardcore —  namely bands like Black Flag and the Minutemen — with a repertoire of old-world Hasidic melodies drawn from weddings and other religious celebrations.” In fact, Blacksberg dug up an EP that Electric Simcha had recorded in 2011 and released it on May 1.

Blacksberg teaches at Temple University, where he started the school’s first klezmer band. He was able to move that work online, but he still acknowledged that he’s lost a great deal of income from the lack of live performances.

Still, he’s trying to make it work. He curated a day of the ACT4Music Online Festival, showcasing musicians that are associated with the international klezmer scene, on May 19. And before that, on May 11, he hosted an online Lag b’Omer klezmer rock dance party in conjunction with Kol Tzedek Synagogue, the West Philly-based Reconstructionist synagogue.

“For me it was a lovely thing to do and connect with the community,” he said. 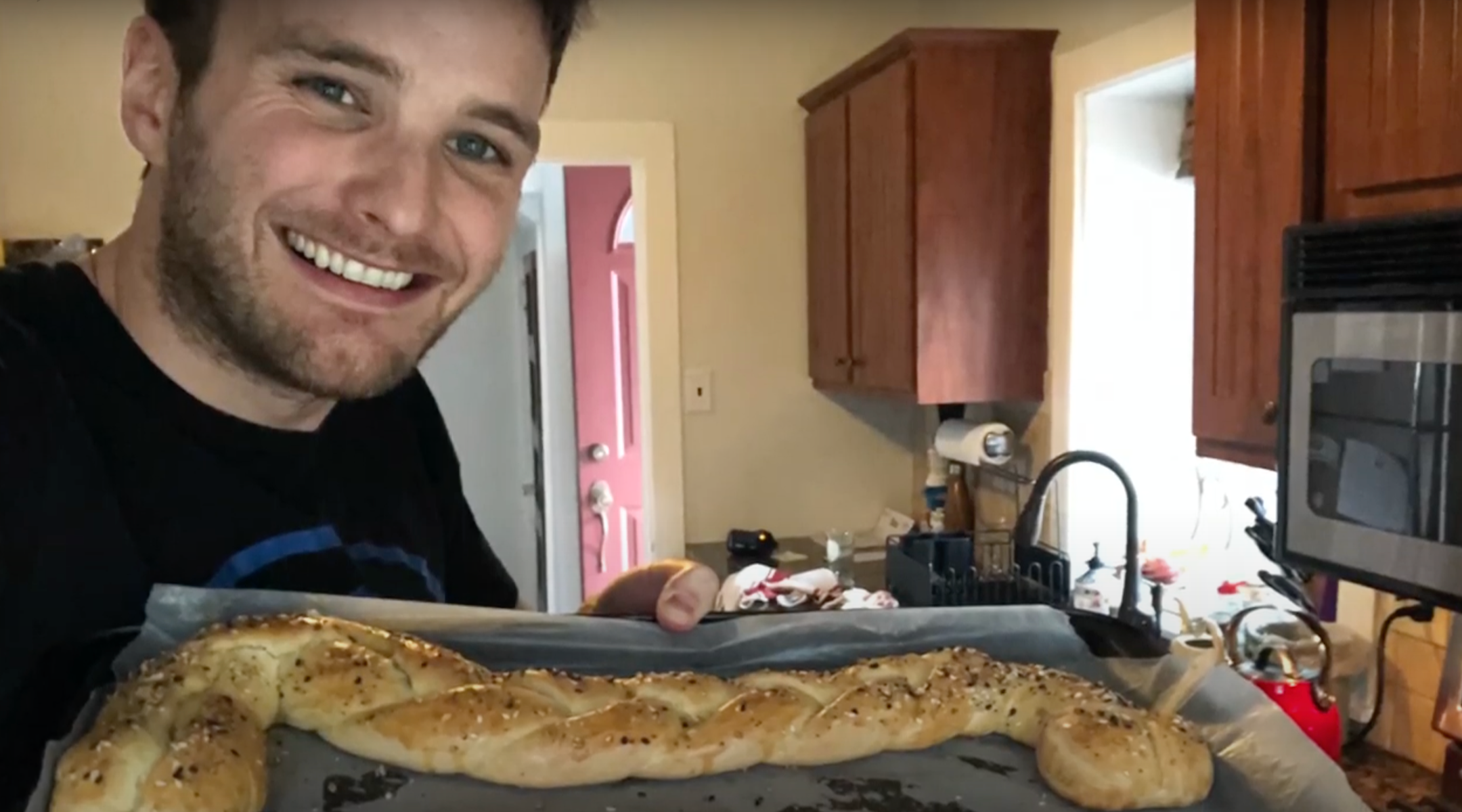 Matt Bussy, manager of the Gershman Philadelphia Jewish Film Festival, shows off his challah during an online cooking class. (Courtesy of Bussy)

The Gershman Philadelphia Jewish Film Festival isn’t merely a film festival — it also runs screenings and other events throughout the year.

Matt Bussy, the festival manager, said that in the absence of this spring’s live screenings, the festival has been hosting weekly Netflix watch parties in which participants watch a movie together on Netflix and chat about it through a special Google Chrome extension called Netflix Party. The series started April 27 with Jenny Slate’s stand-up special “Stage Fright” and was followed by viewings of  “Menashe,” “They Are Everywhere” and “The Cakemaker,” and “The Awakening of Motti Wolkenbruch.”

Each film is preceded by a virtual happy hour.

The festival also has hosted weekly online programming on Facebook and YouTube, most of it related to either food or movies. Bussy, who is in the process of converting to Judaism, hosts a weekly segment called “Feed Your Face Fridays,” in which he shares his attempts at Jewish cooking. 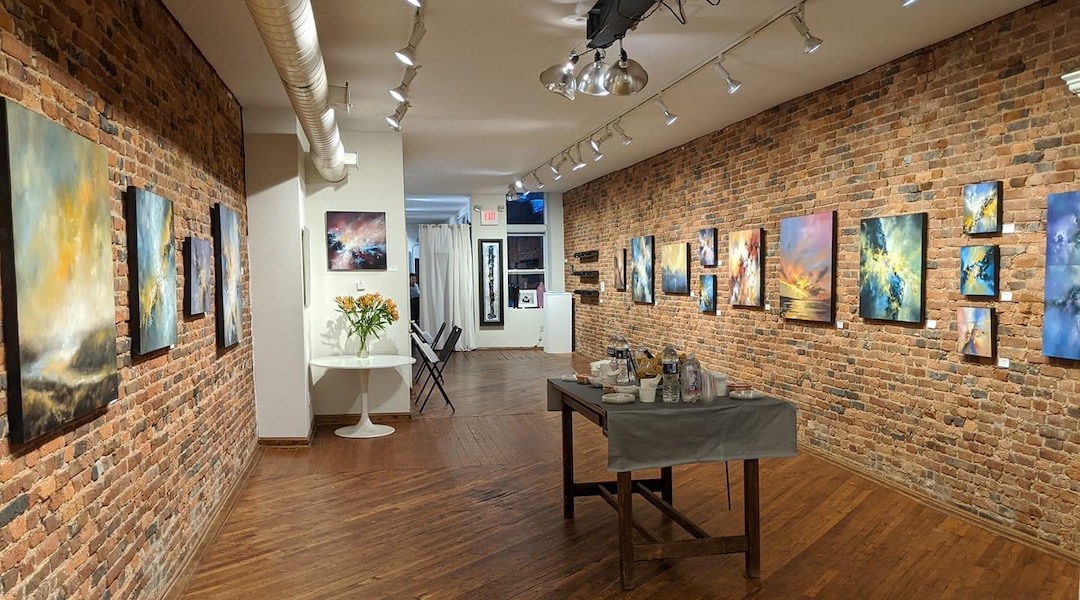 Theatre Ariel is a theater company based in Philadelphia whose website lists its mission as “to illuminate the rich social, cultural and spiritual heritage of the Jewish people.”

“The short answer is OY!,” said Deborah Baer Mozes, the theater’s artistic director, when asked how they’re doing during quarantine. “We spent much time planning and preparing, then in a flash it went ‘poof’! The result is a loss of significant income.”

Philadelphia Jews, ranging from Hebrew school students to active seniors, took part in the theater’s programs and workshops. That’s in addition to the performances that had been lined up from March until the summer.

“Theatre Ariel went virtual. So far, it has proven to be very successful,” Moses said.

It’s had livestream performances of the plays “Ethics of the Fathers AKA the Gangster” and “The Grandpa,” which are showing on both the theater’s Facebook and YouTube pages and been streamed to thousands of viewers. This was followed by a pair of lecture-performances on Crypto-Jewish stories in theater.

The Old City Jewish Arts Center, based in the historic Old City neighborhood, is dedicated to “exploring the universal messages of Judaism through the universal language of the arts.” It, too, has transferred its content online. This spring, the center held a “virtual show” featuring art hung in the gallery and a virtual tour.

“Over the past 15 years we [have] always been a place where people from all walks of life gather to enjoy the warm embrace at our community monthly art exhibitions,” said Rabbi Zalman Wircberg, the center’s executive director, who is known as “Rabbi Zash.” “I’m not sure we can do that every month, but we plan to transition ourselves into a virtual gallery for as long as the current situation requires.”

A singer-songwriter-cantor’s music video for the times 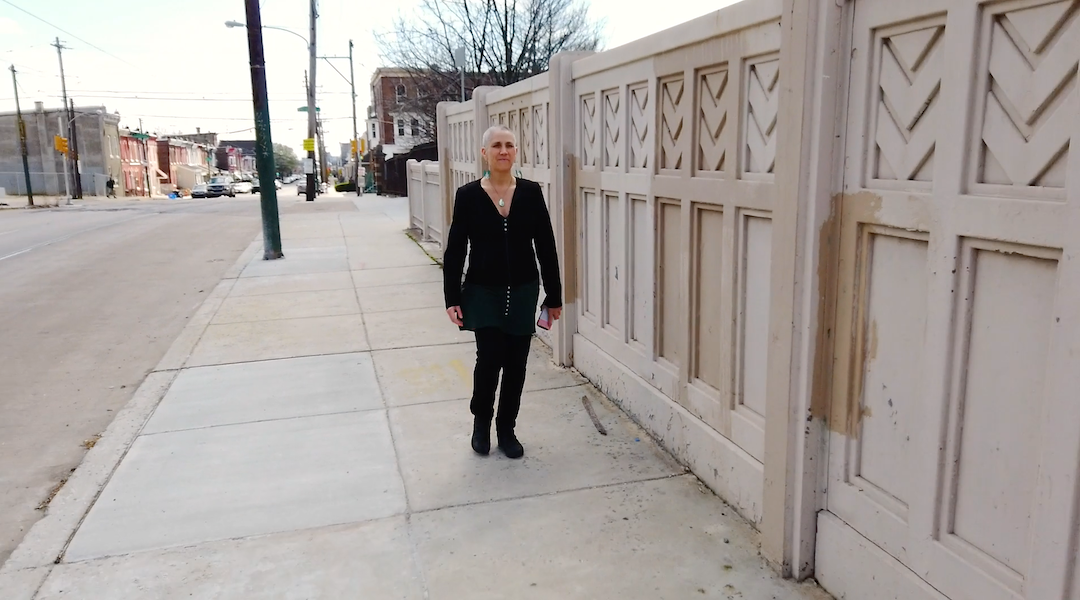 Jessi Roemer walks in the video for her song “Walk With You.” (Screenshot from Vimeo)

In early April, singer-songwriter and cantor Jessi Roemer recorded and released a music video for “Walk With You,” a song from her 2019 album “Praise.” The video features Roemer in her home and walking alone down an empty West Philadelphia street. Several friends and musical collaborators sing along in what resembles a Zoom call, although in reality the participants sent in videos of themselves from home that were edited together.

The song, with lyrics that draw from the biblical book of Isaiah, was inspired by Roemer’s wish for racial justice and to express solidarity with those suffering in recent years. But once the pandemic hit, she said, the words took on a new meaning, with “a whole other message of solidarity that needed to be layered on top of that.” Of course, in the wake of the protests over the killing of George Floyd, another layer of relevance has been added.

Roemer’s life, as a performer and as the cantor for Philadelphia’s egalitarian Society Hill Synagogue, has seen a big shift. Her album, she says, was “written specifically for communal singing.” Her responsibilities at the synagogue, including what she calls “the ritual part, the pastoral part and the educational part,” have moved online. Some of her congregants have been likensing the last two months to “when the Jews lost the Temple.”

“Musical artists, and I’ll say ritual artists as well and prayer leaders, had to very quickly start shifting and really thinking about, and reinventing, how do we go about creating intimacy and connection, in these gatherings that we’re creating with people online,” she said.