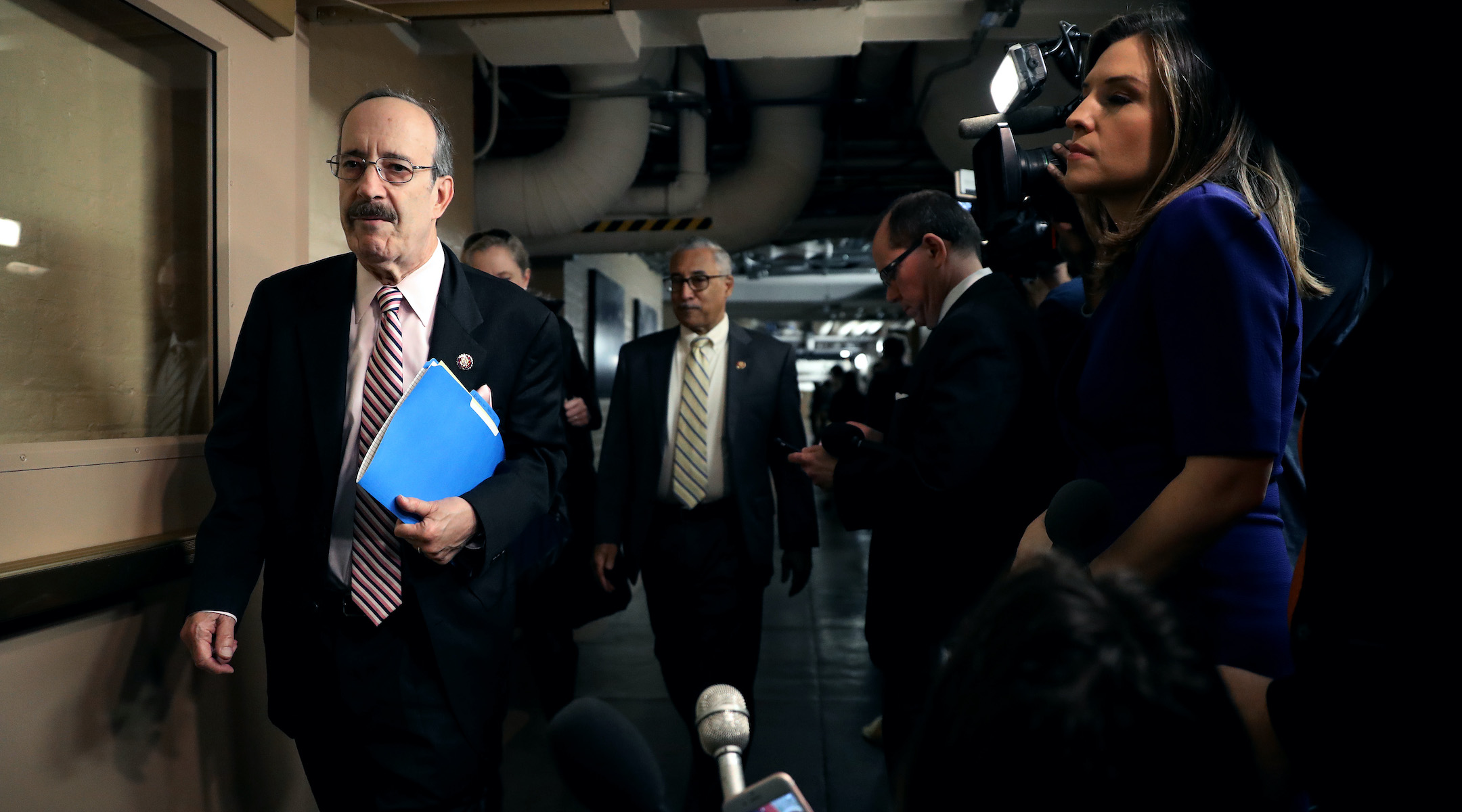 Rep. Eliot Engel walks past journalists as he arrives for a House Democratic Caucus meeting in the basement of the U.S. Capitol, Jan. 14, 2020. (Chip Somodevilla/Getty Images)
Advertisement

Engel, the 16-term Democratic congressman from New York and chairman of the House’s Foreign Affairs Committee, is facing a strong primary challenge by progressive Jamaal Bowman. A series of mishaps by Engel and endorsements for Bowman by key figures, including Rep. Alexandra Ocasio-Cortez, have significantly tightened the once overlooked race.

On Tuesday, Sanders gave his influential stamp of approval to Bowman, saying that the former Bronx public school principal would “fight to invest in public schools, end mass incarceration and address the housing crisis.”

Engel is a moderate Democrat and a leading pro-Israel voice in Congress who voted against the Iran nuclear deal in 2015. Israel policy is not featuring large in the primary, but Engel’s ouster would be a triumph for progressives who want the party to move to a more critical posture on Israel.

I’m honored to have the endorsement of @BernieSanders, someone who has been fighting for civil rights, racial and economic justice, and on behalf of working people for his entire life.

He led the way for the kind of campaign we’re running: grassroots and no corporate donations. https://t.co/pVsoyOaPch

Engel hasn’t been doing himself any favors as the race has become more competitive.

Last Tuesday, just weeks before New York’s Democratic primary on June 23, he was caught on a hot mic saying that he was only interested in speaking at a news conference on vandalism from the George Floyd protests in his Bronx district because of his upcoming primary.

“If I didn’t have a primary, I wouldn’t care,” he said to Ruben Diaz Jr., the Bronx borough president.

“Don’t do that to me, we’re not gonna do this. We’re not politicizing,” Diaz said back.

Our cameras were rolling as @RepEliotEngel asked BP @rubendiazjr if he could speak at a press event this afternoon and was heard saying “if I didn’t have a primary I wouldn’t care.” (Cont…) @News12BX pic.twitter.com/7IeK5PgeNg

That moment encapsulated what Engel’s critics have called his lack of interest in his home district. While many other House representatives have quarantined at their home bases during the COVID-19 pandemic, Engel, 73, had largely been absent from New York City, preferring to stay in Washington, D.C., The Atlantic and others have reported. Engel has said his role as a committee chairman meant he had to stay close to the Capitol.

“As a working-class black male educator during the entirety of Bloomberg’s tenure, I got to experience the horrors and the trauma of how his police department treated people like me,” Bowman wrote in an essay for NBC News. He described “just two examples of many” unwarranted encounters with police.

Two days after the mic incident, Ocasio-Cortez endorsed Bowman. The next day, House Speaker Nancy Pelosi, who has worked closely with Engel for decades, noted that she supports both Engel and Ocasio-Cortez.

Bowman also has the backing of his former fellow progressive primary challenger, Andom Ghebreghiorgis, and the Progressive Change Campaign Committee, which endorsed Elizabeth Warren for president.

Engel represents parts of the Bronx and Westchester, a district whose constituents range from low-income minorities to the affluent residents of the Riverdale neighborhood.

Sanders doesn’t necessarily back sure shots — policy and ideology often trump viability in his endorsements. Still, he fronts a formidable fundraising machine, and he could help tip the balance in the race.

If Engel is unseated, the Foreign Affairs Committee would get a new chair responsible for steering its direction, likely drawn from the moderates who still occupy leadership positions in the House because of their seniority. One person considered a likely fit for the role is Rep. Ted Deutch, a Democrat from Florida who chairs the committee’s Middle East subcommittee and is staunchly pro-Israel.