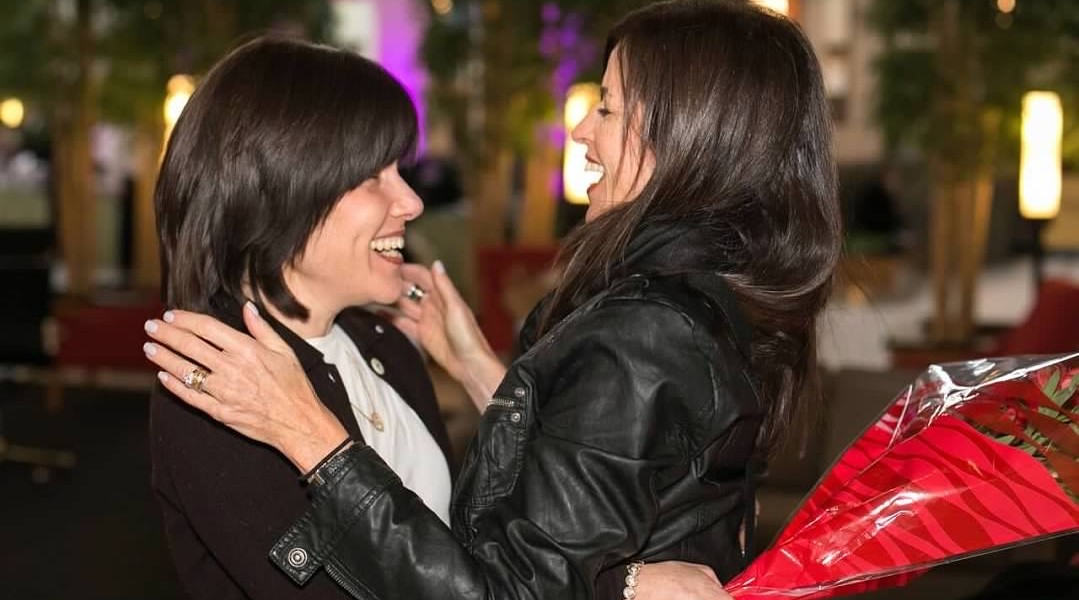 Sheri Heller, right, embraces Sima Kirscher, her study buddy from Partners in Torah, upon meeting her for the first time after months of studying together. (Courtesy of Sheri Heller)
Advertisement

When Sheri Heller’s husband nearly died in 2014 after doctors found that a quarter he had swallowed decades earlier had perforated his small bowel, Heller decided that the episode was a case of God “banging on our door.”

An attorney from Potomac, Maryland, Heller had attended Hebrew school as a child but had not really done much Jewish learning as an adult.

So she decided to go to Israel on a women’s program. She returned with a newfound interest in Judaism and an actionable recommendation for how to cultivate her curiosity: a one-on-one Jewish learning program that matches Jewish mentors with people like Heller interested in deepening their Jewish knowledge.

Heller was paired with Sima Kirscher, an Orthodox woman from Far Rockaway, New York, a mentor who signed up for the program, called Partners in Torah, as a way to honor the memory of her recently deceased mother. The learning happens online, which was perfect for Heller, a mother of four who was intimidated by the idea of meeting in person.

“My first goal was to learn to daven fluently and with understanding,” Heller recalled, using the Yiddish word for pray. “I was nervous at first. I didn’t think an Orthodox person would actually want to teach me and learn with me.”

But that quickly changed.

“I realized that I was judging myself and that Sima was only about unconditional love and support and really wanted to guide me and help me learn and reach my goals,” said Heller, now 56.

Today the study partners are close friends and Heller prays every day.

The goal of Partners in Torah is simple: To have Jews learn together using the time-tested model of one-on-one Jewish learning known as chavrutah. The organization, which has helped build more than 76,000 partnerships across 29 countries since its founding in 1993, uses a variety of criteria to match students with the right mentors. The learning is done remotely, with partners meeting by phone, Zoom, WhatsApp or other virtual communication tools.

Now, with so many Jews around the world mostly staying home due to the coronavirus pandemic, there is a great hunger for meaningful human connection, says Moe Mernick, chief operating officer of Partners in Torah.

“We are creating an Airbnb-like, two-sided marketplace whereby there are two people who are looking to study and we are a platform in between connecting people,” Mernick said, noting that the program is free.

The focus is on paired study rather than video classes or developing online educational curricula for solo study because the program’s leaders believe that chavrutah learning is the ideal way of engaging not just with Jewish texts but with people.

“The Torah and Talmud are intended to be analyzed and challenged in a very critical way, and you can’t do that alone,” Mernick said.

Computer scientist David Magerman remembers the moment when he decided he wanted to deepen his Jewish life. When visiting religious family in Jerusalem years ago, he noticed that people streamed in and out of the family’s home all day, every day.

“I didn’t feel like I had that kind of community back home,” said Magerman, who lives outside Philadelphia.

But intense work at a hedge fund didn’t leave him much time. A friend recommended the partners program, highlighting the flexibility of the setup and time commitment. Magerman agreed to try it and was interviewed by a staffer who asked about 30 questions to find Magerman the right study partner.

He was matched with an attorney from Teaneck, New Jersey, and the two began studying the Kitzur Shulchan Aruch, a book of Jewish laws.

“He was stunned that I wanted to go through the laws one at a time and learn them,” Magerman said. “He thought it was the most boring thing around, but I said that’s what I wanted to do, so we did it. He accepted my challenging tone. He wasn’t put off by my questions.”

“The Talmud states, ‘When two people learn Torah together, they begin as enemies, as foes, and they end up as beloved friends,’” said Rabbi Dovid Bashevkin, director of education for the National Council of Synagogue Youth, part of the Orthodox Union. “I think what makes Partners in Torah remarkable is it connects people from deliberately different experiential backgrounds in Jewish learning, and I think the more disparate the background, the more impactful the bond.”

Nikki Schreiber, the founder and editor of Humans of Judaism, a Jewish media company, has participated in the program as a mentor.

“Your arm is not being twisted in any sort of way,” Schreiber said. “It’s really an environment where people are coming together with the same effort and goals.”

About a year after Heller and Krischer began learning together, they met for the first time at a Partners in Torah Shabbaton retreat in Connecticut.

“I was a nervous wreck,” Krischer recalled with a laugh. “And then she came, and we were just screaming and hugging.”

Their families have become close in the years since. Heller traveled to Krischer’s sons’ weddings in New York and New Jersey, and their two daughters currently study Torah together.

Now the initiative is being taken up by another generation: Heller’s 82-year-old mother recently signed up to learn.

This story was sponsored by and produced in collaboration with Partners in Torah, which facilitates online, one-on-one Jewish learning partnerships. Learn more about how you can personalize your Jewish journey. This article was produced by JTA's native content team.

More from Partners in Torah