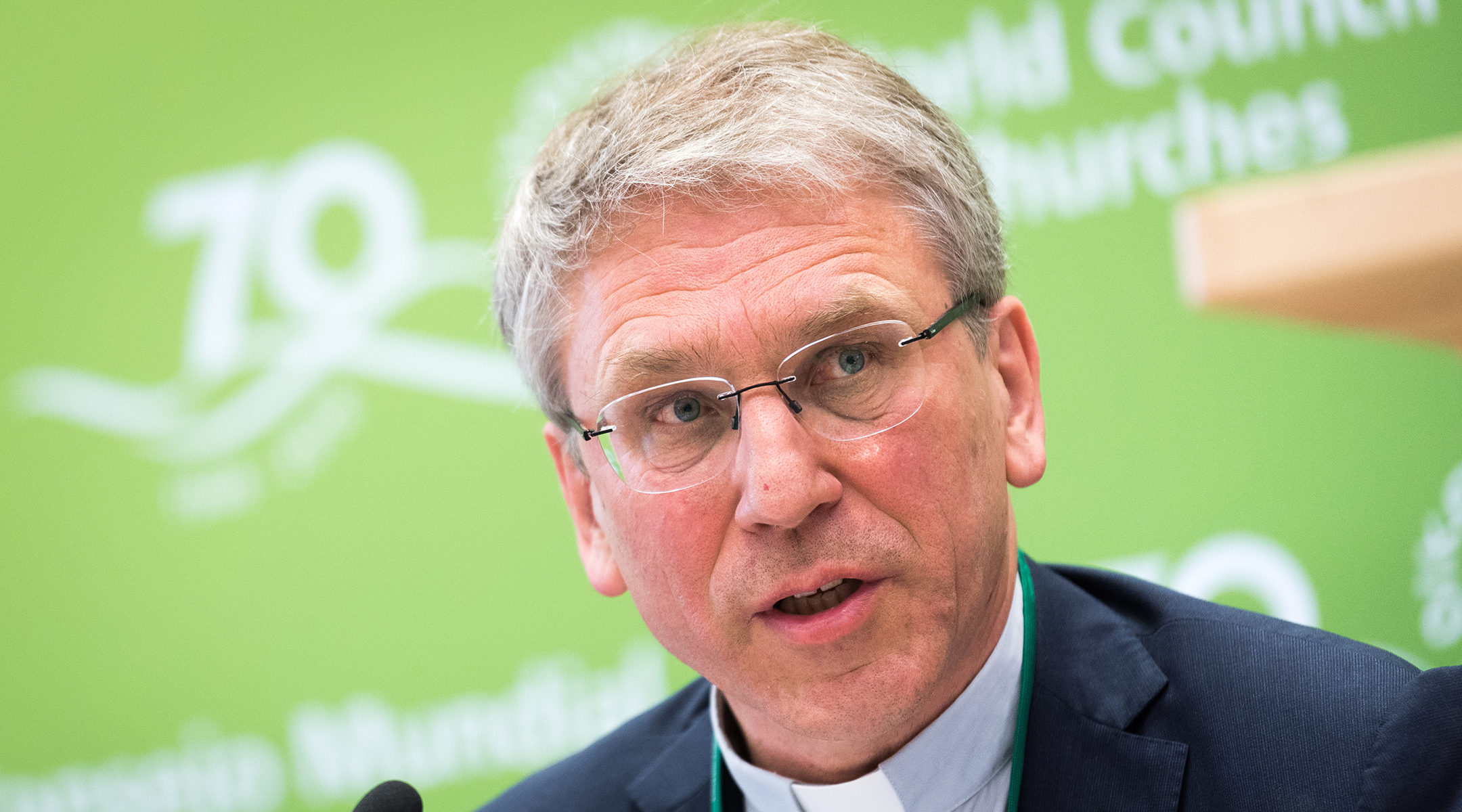 (JTA) — The World Council of Churches is asking European diplomats to punish Israel with sanctions if it annexes West Bank lands. The request has triggered a heated debate in Christian circles.

The call to punish Israel came last month in a letter to EU foreign ministers from the Geneva headquarters of the council, an umbrella body established in 1948 that now has 350 member churches with about 500,000 followers among them. The Catholic Church is not a member.

If Israel annexes land, the letter said, “the EU must surely suspend the EU-Israel Association Agreement,” a reference to a 1995 contract that promotes trade between the bloc and the Jewish state. In addition, the EU should apply sanctions on Israel “at least commensurate with those adopted by the EU in response to Russia’s annexation of Crimea.”

The EU has blacklisted hundreds of Russian individuals and firms over alleged involvement in the Crimea annexation from 2014, subjecting them to entry bans and freezing of EU properties.

“The unilateral annexation of yet more of the territory that remains to Palestinians cannot lead to justice or to peace, but only to greater injustice,” the church body wrote.

In recent years, the council has been accused of pursuing an anti-Israel agenda, a claim rejected by its leaders.

In 2019, it emerged that the council had gathered information for years on the Israeli army’s actions in land that the council and international community regards as occupied, with activists masquerading as tourists.

Israeli Prime Minister Benjamin Netanyahu has announced plans to apply Israeli civilian law in the Jordan Valley and some Israeli settlements in the West Bank as early as July 1.

Advocates of the plan say it ensures security control over Israel’s longest border and cements the existence of settlement blocs as part of Israel without precluding the option for a future Palestinian state in the remaining territory.

The council’s statement drew sharp criticism from Christians for Israel, a Netherlands-based international network of pro-Zionist Christians from 27 countries and hundreds of thousands of congregants. The group said in a statement that churches should not meddle in Middle East politics and that the council did so “in a one-sided manner.”

In the Netherlands, the letter also caused a split within the country’s largest church body, the Council of Churches of the Netherlands. That’s because that organization had forwarded to Dutch Foreign Minister Stef Blok the letter calling for sanctions, adding it was the position of all its constituent member churches.

This prompted hundreds of angry reactions, including threats, that were sent to the Council of Churches of the Netherlands, its chairman, Geert van Dartel, wrote in a letter to Christians for Israel.

Additionally, two church bodies that belong to the Council of Churches of the Netherlands publicly distanced themselves from the umbrella group’s letter to Blok and complained that the decision to include them as co-signers was made without consulting them and against their positions.

The churches that protested were the United Pentecostal and Evangelical Churches and the Covenant of Free Evangelical Congregations in the Netherlands, which have tens of thousands of followers and about 200 congregations between them.

Dutch Chief Rabbi Binyomin Jacobs in a column on the CIP website linked the letter on sanctions to centuries of Christian hostility to Jews.

“Considering the history, in which churches continuously instructed Jews on what they can and cannot do, it would behoove those same churches to adopt caution and humility on Israel,” he wrote last week. “It’s a democracy, it can, may and must make its own decisions and solve its problems.”