Israel could annex parts of the West Bank on July 1. Here’s what you need to know. 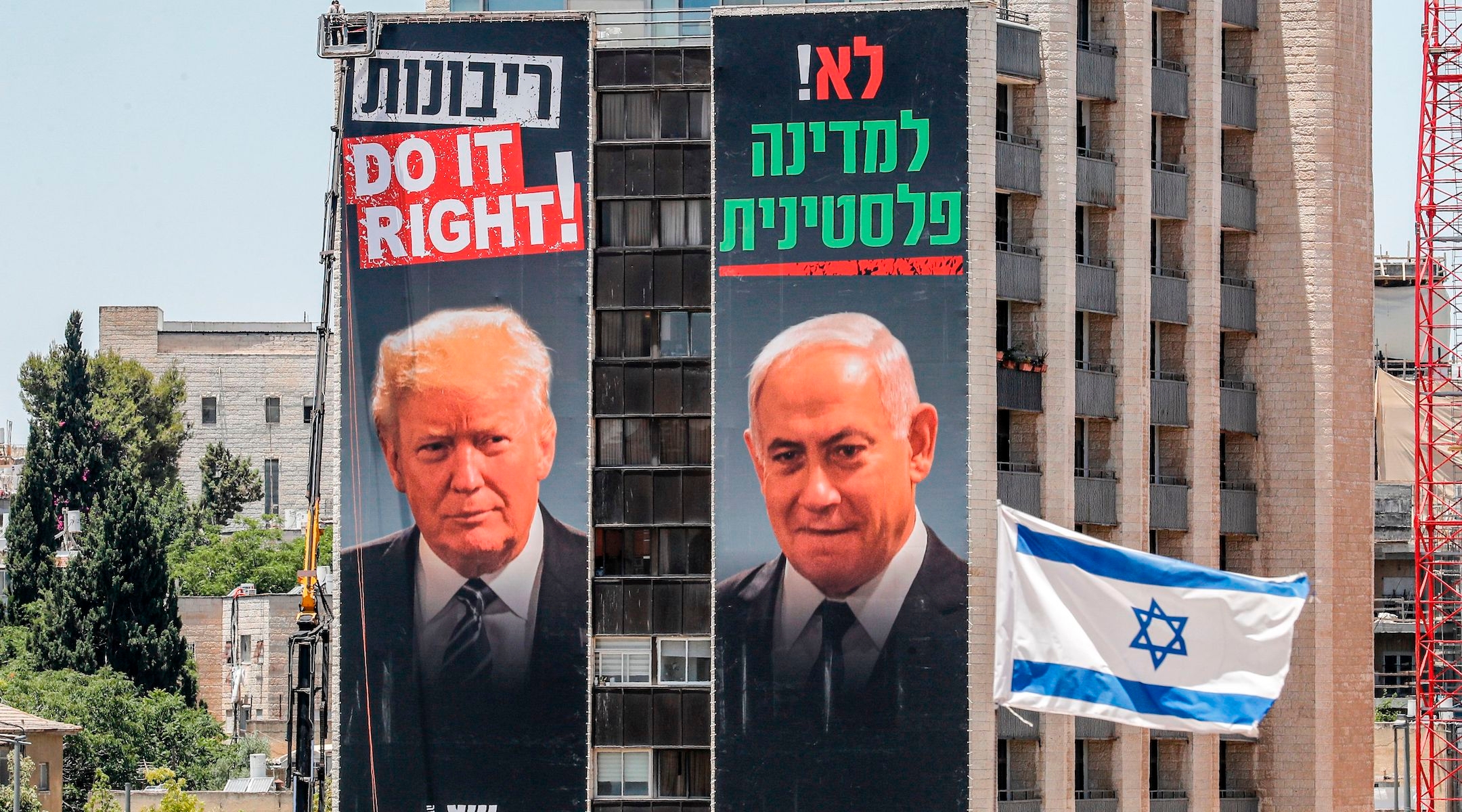 Giant posters on buildings in Jerusalem feature photos of Israeli Prime Minister Benjamin Netanyahu (right) and President Donald Trump, beneath slogans supporting West Bank annexation and opposing a Palestinian state. They were hung by the Yesha Council, an umbrella organization of Israeli settlements in the West Bank, which is split on Netanyahu's annexation plan. (Ahmad Gharbali/AFP via Getty Images)
Advertisement

(JTA) — While the world has had its attention fixed on the George Floyd protests and the ongoing threat of COVID-19, a political development with monumental implications has been brewing in the Middle East: Israel’s potential annexation of parts of the West Bank.

Israeli Prime Minister Benjamin Netanyahu promised his supporters during multiple election campaigns last year that he would make areas outside of the country’s borders part of the state.

Now his chance is fast approaching. The terms of a government coalition deal he struck with political rival Benny Gantz allow Netanyahu to put annexation to a government vote as early as July 1. The pair reportedly differ over details, but the U.S. ambassador to Israel, David Friedman, is trying to broker an agreement.

What happens with annexation has potentially steep stakes for Israel’s relationship with the United States, with its allies in Europe and beyond, and with American Jews. Some of the country’s fiercest supporters oppose Netanyahu’s annexation push.

The opposition and other factors complicate the chances of annexation happening on July 1, but the possibility remains on the table. So here’s what you need to know before that important date.

What could happen July 1

Netanyahu, who has opposed a Palestinian state during most of his career, sees annexation as a way to safeguard Israel’s control over parts of the West Bank, which much of the Israeli right views as Israel’s historical heartland. Annexation has also been a key demand of Netanyahu’s base, so he would see this as a major political victory.

If the prime minister had his way, he would immediately try to annex the land that Israel was allotted under the Trump administration’s Middle East peace proposal in January — approximately 30% of the West Bank, including the Jordan Valley. He could put the idea up for a vote either in parliament or his own Cabinet, according to the coalition agreement.

But he may be starting small. According to a Times of Israel report, Netanyahu currently plans to annex just a small portion of West Bank territory on July 1 — namely the land occupied by over 100 Jewish settlements.

The rest could come later, but the limited approach for now reportedly stems from the fact that a U.S.-Israeli team is still determining the exact lines of territory described in the peace deal. (The Palestinians have been unequivocal in their rejection of the plan.)

The mapping process and the time it takes could be up to Jared Kushner, Trump’s point person on the entire Middle East project. While Friedman pushed early on for annexation to happen as quickly as possible — the ambassador is an outspoken supporter of the settlements and has close ties to them — Kushner has been more hesitant. An Israeli TV station reported last week that the U.S. administration, caught up in handling the George Floyd protests and the coronavirus pandemic, wants to “greatly slow the process” of annexation, although Friedman’s intervention suggests continued interest in making it happen.

The right wing of Israeli politics is a major backer. That includes even Netanyahu’s other bitter rival, Avigdor Liberman, the hawkish head of the Yisrael Beiteinu party.

So does the Trump administration, which authored the peace plan that essentially gave Netanyahu the green light for annexation. The administration’s supporters, including many evangelical Christians who have a religious interest in the West Bank territory remaining under Israeli control, also support the move.

Many right-wing leaders, politicians and organizations in the U.S. support the move as well.

But outside of the right wing in Israel and the U.S., it’s difficult to find much support.

The speculation about annexation has already prompted a wave of critical responses, from liberal Jewish groups whose opposition might be expected to U.S. politicians and world leaders, as well as prominent Jews who don’t always weigh in on politics.

In the United States, the caution around annexation has been bipartisan, with Republicans and Democrats alike warning late last year that such a move would threaten efforts to reach a two-state solution.

Some of the more centrist pro-Israel groups, such as AIPAC, the largest Israel lobbying group in the U.S., have yet to show their cards. The issue puts groups like the American Israel Public Affairs Committee in a delicate position — does it support Israel at all costs, or does it draw a line on actions it believes endangers the Jewish state’s future?

In a twist, several Israeli settler leaders, mayors and other activists whose homes would become part of Israel under annexation oppose the move. They say annexation would stunt settlement expansion and freeze the currently disparate settlements, which are sprinkled across the West Bank, in an insecure position. They also oppose a Palestinian state of any borders.

“Either the settlements have a future or the Palestinian state does — but not both,” right-wing lawmaker Bezalel Smotrich, who at one point pushed for annexation, told The New York Times last week.

What the consequences could be

If Netanyahu plows ahead with annexation without winning over some of his critics at home and abroad, there could be consequences for Israel.

Most of the international community sees the settlements as part of an illegal Israeli occupation of land that could make up a Palestinian state. Annexation would also be viewed as illegal according to United Nations standards, just as Russia’s annexation of Crimea was in 2014, for example.

The move would certainly trigger intense international condemnation, and even a possible shake-up in international allegiances. While many European and other countries — including the United States under President Obama — have disagreed with Netanyahu over policy, they have held on to hope of a future two-state solution. Annexation would at least alter what the traditional two-state solution looks like.

Politicians in some countries, including at least one staunch ally of Israel, have already called for sanctions on Israel if it carries out annexation as threatened.

For the more than 400,000 Israelis who live in the settlements and are full citizens, the specifics of post-annexation governance are still unclear. But it’s undeniable that the move would shape the contours of future peace efforts in the region, as Israel would unequivocally see the West Bank settlements as part of the official state in any negotiations with the Palestinians.

Those negotiations would almost certainly be set back by annexation. The Palestinians have already renounced their responsibilities agreed to under the Oslo Accords, the 1993 agreement that established security cooperation between them and the Israelis and launched the peace process. (Serious, direct talks have not happened for more than six years.) They say that unilateral annexation, which both sides agreed to forgo in the accords, is a deal breaker when it comes to negotiating with Israel on anything moving forward.

Neighboring Jordan could be next to back away from security agreements with Israel, as the country’s king has said it will bring “massive conflict.” The Arab League also has issued a warning to Israel. Some have speculated annexation could spark Palestinian violence in the area as well.

“We don’t want things to reach a point of no return,” Hussein al-Sheikh, a close adviser to Palestinian Authority President Mahmoud Abbas, told The New York Times on Monday. “Annexation means no return in the relationship with Israel.”