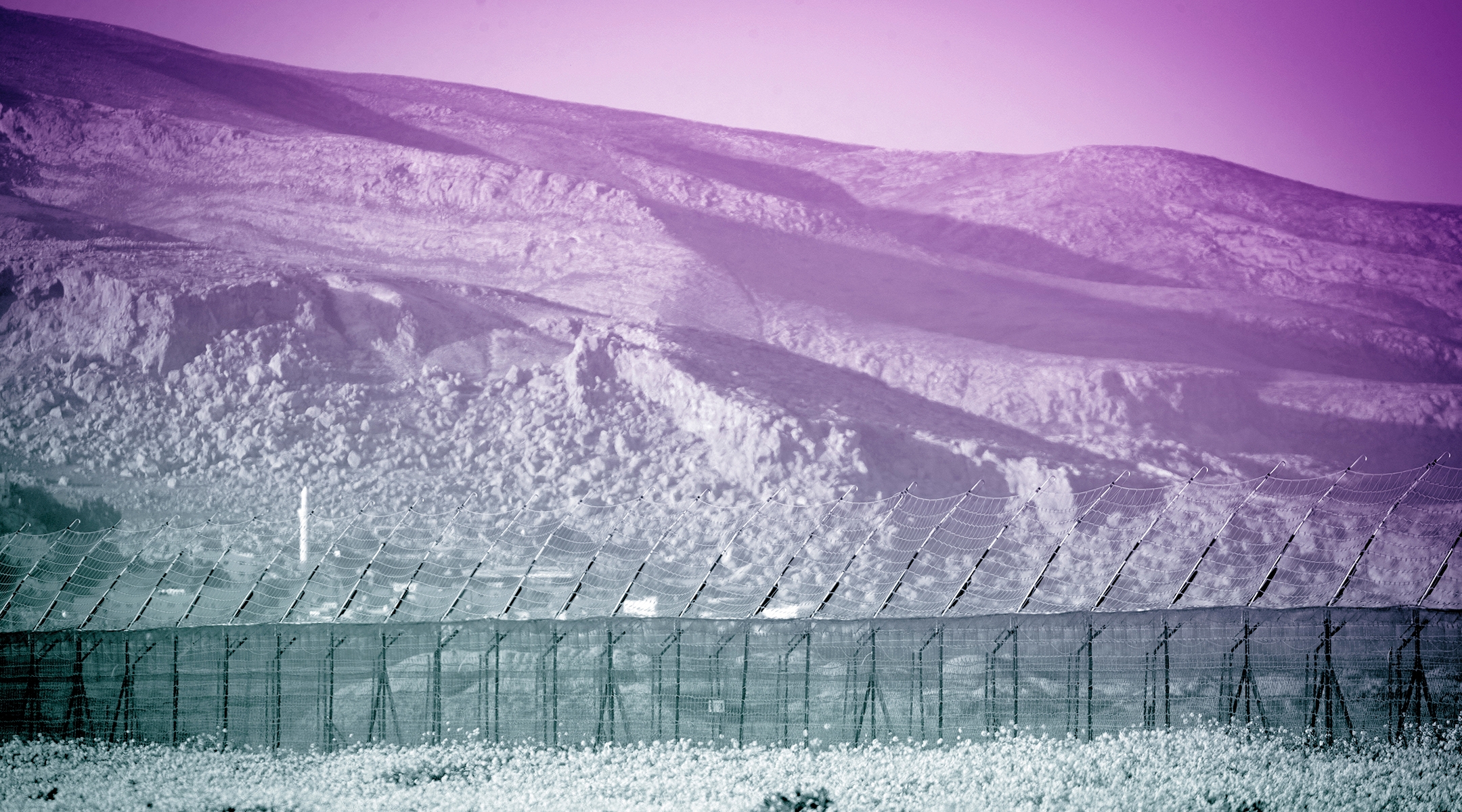 A view of the border fence between Israel and Jordan in the Jordan Valley, in the West Bank, Feb. 13, 2019. (Yonatan Sindel/Flash90)
Advertisement

(JTA) — Benjamin Netanyahu just said that if he is re-elected next week, he’ll immediately annex a big part of the West Bank: the Jordan Valley.

That’s kind of a big deal. On the other hand, it’s not really — yet.

That specific eastern swath of the West Bank runs alongside the (yep, you guessed it) Jordan River. It would be the first time in decades that Israel annexed any territory in the West Bank, and it assuredly would have serious implications for the future of Israeli-Palestinian relations. Netanyahu also said he’d move to annex more territory — after the Trump administration unveils its long-awaited peace plan sometime following Israel’s elections next week.

“Today I’m announcing my intention, with the establishment of the next government, to apply Israeli sovereignty to the Jordan Valley and the northern Dead Sea,” Netanyahu said. “This is our essential safety belt in the east. This is the eastern defensive wall.”

Here’s what that means and why it matters.

What is the Jordan Valley?

The borders of the territory aren’t precisely defined, but the area to which Netanyahu was referring is pretty extensive, stretching at its widest about 10 miles into the West Bank.

Who controls the Jordan Valley now?

The West Bank as a whole is under varying degrees of Israeli control. Some of it is governed by Palestinian institutions (with minimal Israeli military presence) and the rest is run entirely by Israel. The Jordan Valley is in the part that is fully controlled by Israel, with the exception of the Palestinian city of Jericho.

The Jordan Valley is also home to dozens of Israeli settlements.

So the Jordan Valley is part of Israel?

No. Like the rest of the West Bank, Israel has controlled it for more than 50 years but has never officially annexed it. Israelis who live there are Israeli citizens. Palestinians there do not have citizenship and do not have the right to vote for Israeli officials, though they do vote in Palestinian local elections. Israel also largely controls the Palestinians’ freedom of movement.

The Palestinians, the international community and the Israeli left say the West Bank is unjustly occupied by Israel. The Israeli Supreme Court has also defined the territory as occupied. The Israeli right and its supporters say Israel rightfully won the territory in a defensive war. Some Israelis — especially religious Jewish ones — view the West Bank, or Judea and Samaria, as Israel’s heartland, the setting of many of the Bible’s events.

With annexation, Netanyahu would officially be making the Jordan Valley part of Israel, having the same status in Israel’s eyes as Tel Aviv or Jerusalem. Most of the international community hasn’t recognized Israel’s previous annexations, and likely wouldn’t recognize this one, either.

However, Palestinian areas like Jericho or the village of Duma, which was the site of a Jewish extremist terror attack in 2015, would not be annexed. Those cities, now surrounded by Israel, would maintain their current status.

Why is Netanyahu focusing on the Jordan Valley?

Israelis have been fiercely debating the status of the West Bank for decades. But to Jewish Israelis, the Jordan Valley is less controversial than the rest of the territory.

Successive Israeli governments have viewed control of the Jordan Valley as a strategic asset for Israel. It completes the country’s eastern border with Jordan and allows Israeli forces to encircle the West Bank’s Palestinian population. It essentially creates a buffer between Israel and the Arab states farther to its east, including Jordan, Iraq and Saudi Arabia. 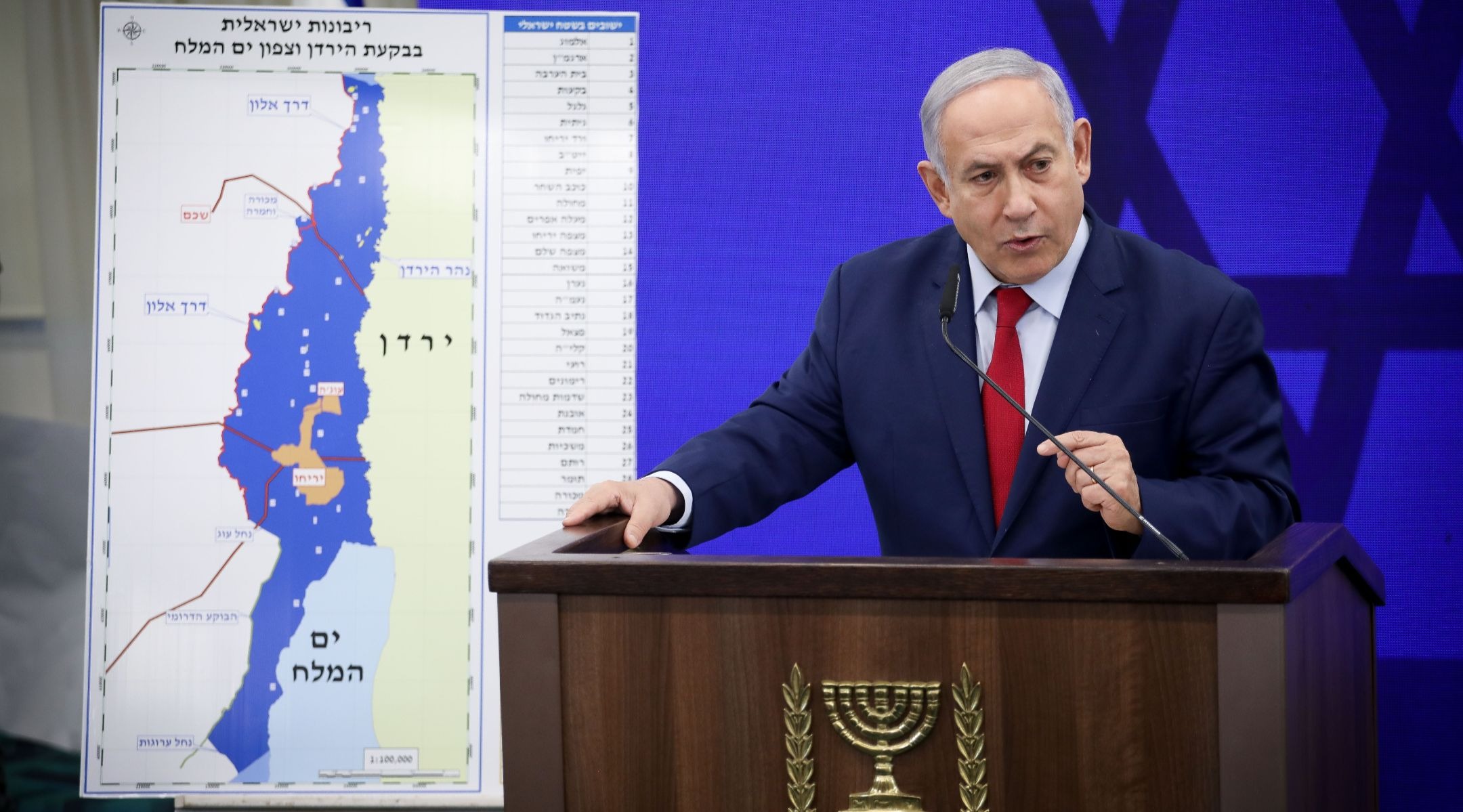 Israeli Prime Minister Benjamin Netanyahu announces that if he is re-elected, he will make the Jordan Valley a sovereign part of Israel, Sept. 10, 2019. (Hadas Parush/Flash90)

The valley is also pretty sparsely populated. West Bank Palestinians are concentrated elsewhere, and Israel’s largest settlements are farther to the west.

Maintaining control of the Jordan Valley is also not a new idea. Even Yitzhak Rabin, the left-wing Israeli prime minister who launched the Israeli-Palestinian peace process in the 1990s, said in 1995 that “The security border, for the defense of the State of Israel, will be in the Jordan Valley — broadly defined.”

Would this hurt the chances for peace?

Chances for peace are already pretty slim. But this could make them a little slimmer.

The Palestinians and Israelis haven’t been in any kind of serious negotiations for more than five years. Palestinian leaders won’t talk to the Trump administration because they view it as overly pro-Israel. Netanyahu has said repeatedly that he will not evacuate any settlement and opposes the establishment of a Palestinian state. So for supporters of a Palestinian-Israeli peace accord with two states existing side by side, things already aren’t looking good.

This move would further entrench Israel’s presence in the West Bank and make a future evacuation of the territory — what many see as a part of an eventual two-state solution — even more unlikely. The Palestinians have insisted on governing the Jordan Valley as part of a future peace deal.

Netanyahu also promised, in his speech and earlier, to annex even more Israeli settlements down the line. The more Israel annexes, the less possible a contiguous Palestinian state would be.

How are people reacting?

For opponents of an Israeli withdrawal from the West Bank, this is good news. Yishai Fleischer, the spokesman for the Jewish settlement in the West Bank city of Hebron, tweeted (in all caps) that Netanyahu’s speech was “A HUGE MOVE FORWARD!”

Many Palestinians and many across the international community had a different reaction. A United Nations spokesman called Netanyahu’s pledge “devastating to the potential of reviving negotiations, regional peace and the very essence of a two-state solution.”

“If the annexation is carried out, it will have succeeded in burying any prospect of peace for the next 100 years,” tweeted Saeb Erekat, a longtime Palestinian negotiator. “The Israelis, the international community must stop this madness. Annexation is a war crime.”

Israelis as a whole are split. Nearly half of Israeli Jews and 11 percent of Israeli Arabs favor annexing the Jordan Valley if Trump supports it, according to a recent poll by the Israel Democracy Institute. Twenty-eight percent of Jewish Israelis and a majority of Arab Israelis oppose the idea.

Bottom line: Is this going to happen?

At this point, it’s impossible to say. Before carrying out this pledge, Netanyahu has to win in next week’s election and assemble a coalition that supports annexation. The race is neck-and-neck right now.

Even if Netanyahu wins the most votes, it’s unclear that he’ll be able to form a right-wing government (he could not following April’s election). He may be forced to share power with his centrist rivals, a party called Blue and White. Blue and White said Tuesday in a statement that “the Jordan Valley is a part of Israel forever,” but has stopped short of endorsing unilateral annexation without some kind of peace accord.

The Trump administration has said it will release its plan for Mideast peace after the election. Netanyahu has said he would pursue annexation in full coordination with the U.S., so before the plan is released, all bets are off.