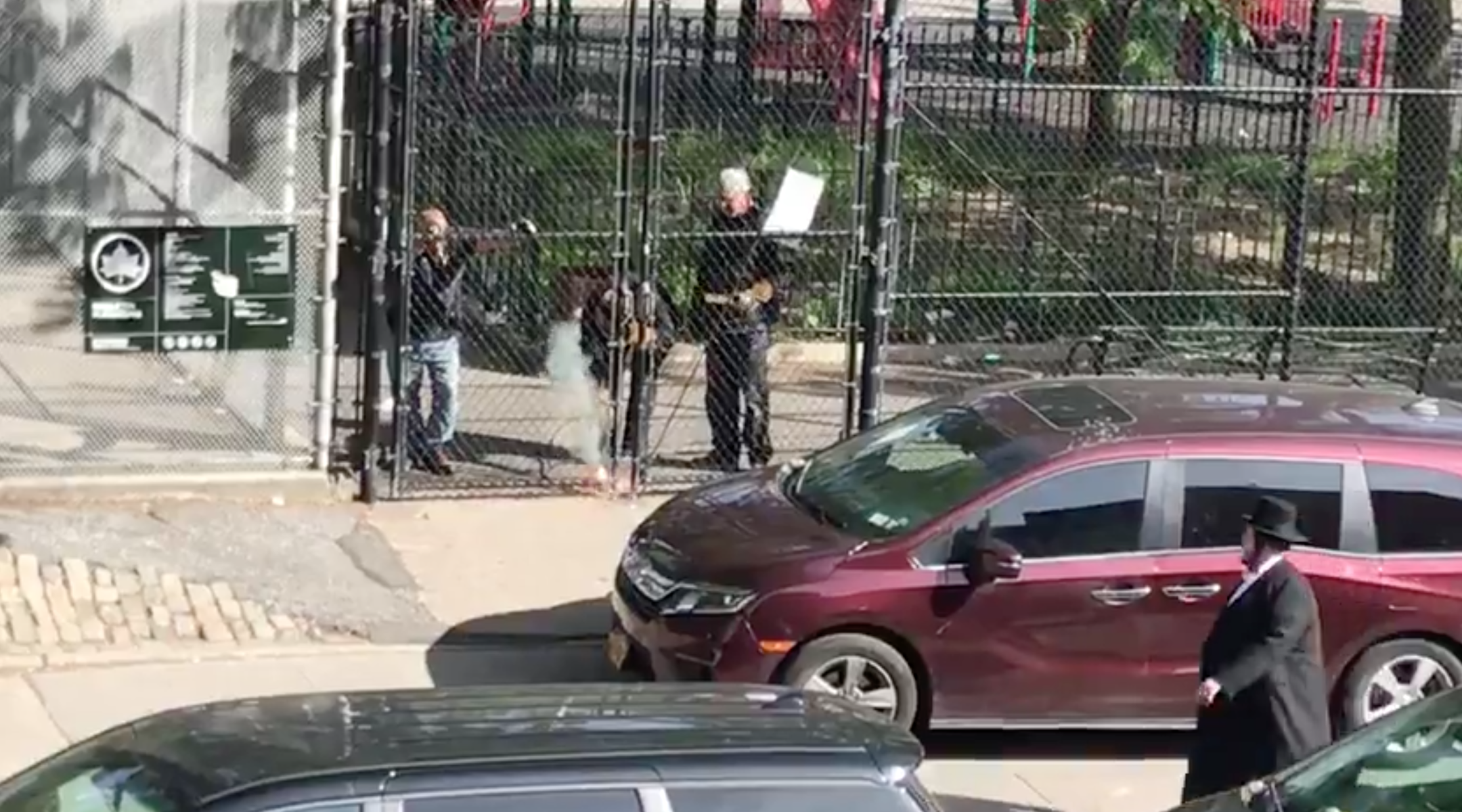 (JTA) – Leo Goldman was walking past the park Monday morning when he saw workers closing the two entrances to a playground in Williamsburg, a heavily Orthodox neighborhood of Brooklyn. Not just closing, welding.

In a WhatsApp message, Goldman told the Jewish Telegraphic Agency that he tried to open the gate himself.

But by the afternoon, Goldman said, city workers had removed the welded portion of the gate and chained the playground shut.

The roller coaster ride at Middleton Park was the latest episode in a growing conflict between New York City officials and Orthodox Jews over what to do with their children, restless after three months of lockdown, as the coronavirus pandemic continues.

VIDEO: As @NYCMayor marches with protesters and orders Contact Tracers not to ask people if they were at protests, the City is welding shut a park that is largely used by Hasidim in Williamsburg, Brooklyn. pic.twitter.com/HcAEo4jVA9

The city has officially closed all playgrounds to children and their families — and sometimes is also barring entrance to surrounding green space — in an effort to slow the spread of disease.

But Orthodox elected officials say the rules are being enforced differently in various parts of the city. In a tweet last week Kalman Yeger, an Orthodox city councilman from Brooklyn, pointed to playgrounds in other parts of Brooklyn that remained open as proof of unequal enforcement.

Around the city @NYCParks are open to the public.
Well, not everywhere. If you live in Midwood, Boro Park or Williamsburg, the city has chained your park, and if you're in one, you're treated like a criminal.#EnoughIsEnough. It's time for @NYCMayorsOffice to unchain our parks! pic.twitter.com/mNFdJMRzki

City officials said Monday that the locks at Middleton had been broken multiple times. The welding — done from the inside, according to videos posted online — was a temporary measure, a Parks Department spokesperson said, because no staff was available to reinstall the chain earlier in the day.

Not long after the welding was removed and the park chained shut, a video was posted to Twitter showing two Orthodox men cutting the chains on a park gate. It was unclear where the video was taken. One man fell backwards as he pulled the chains off the gate. “Come on in, guys,” another said to the waiting crowd as the gates swung open.

Last week, Gov. Andrew Cuomo said city officials could begin allowing children to use playgrounds, but New York City Mayor Bill de Blasio said he was not yet prepared to do so.

On Sunday, Orthodox lawmakers held a rally calling for the city to open playgrounds. That rally followed multiple days of rallies calling on city and state officials to permit camps to operate.

Late last week, Orthodox children blocked the streets of Brooklyn while shouting “We want camp!” The young protesters carried signs that borrowed from the language of recent protests for racial justice with the slogan “No camps, no justice.”

The lawmakers have pointed to the large protests against police brutality as proof that some breaches of social distancing are deemed acceptable, while others are censured.

Their campaign continued on Friday, the same day that Cuomo announced that overnight camps would not be allowed to open in New York state this summer.