Amid a national reckoning over race, Jews are embracing Juneteenth 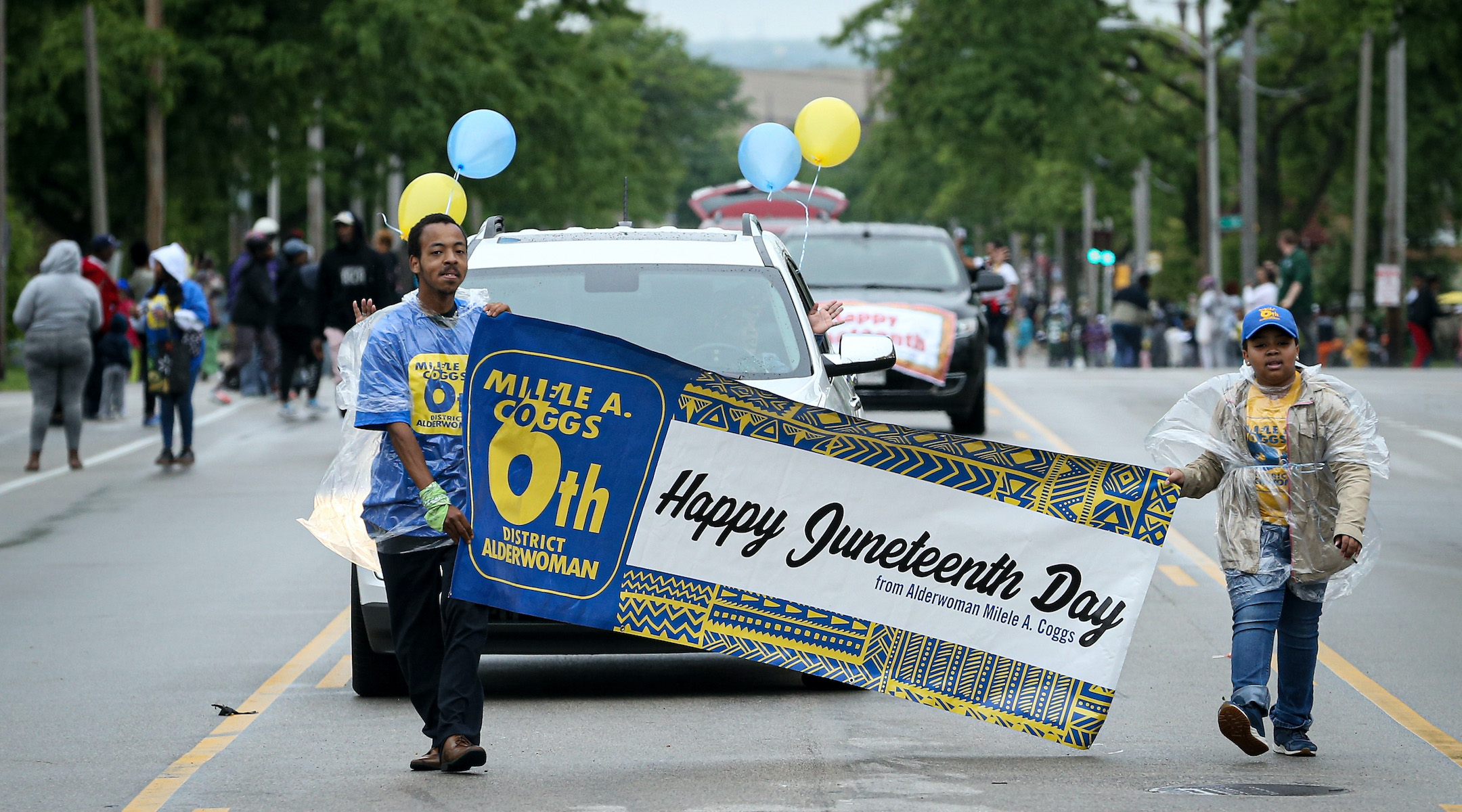 (JTA) — After the outbreak of the coronavirus pandemic this spring delayed the launch of the website for TribeHerald, a new media company for Jews of color, founders Yitz Jordan and Rabbi Shais Rishon settled on a perfect alternative: the evening of June 18.

After all, it would be “erev Juneteenth,” Jordan said — a mashup of the Hebrew word denoting the eve of Jewish observances and the name of the holiday commemorating the day Black people enslaved in Texas learned they had been freed.

First observed in 1866, Juneteenth has experienced a surge of interest this year amid nationwide protests against racial injustice. That surge extends to the Jewish world, where a range of events are planned for this Juneteenth, which this year coincides with the beginning of Shabbat.

“The key word for this Juneteenth would be visibility,” Jordan told the Jewish Telegraphic Agency. “Starting from the most obvious example, we got to see so much police brutality and so much inequality and so much visual evidence of disparate treatment, so the struggle became more visible. And now more people are visibly out in the streets, of all ethnicities, screaming Black Lives Matter. Now is the perfect Juneteenth to bring Jews of color into visibility and to show that our lives matter, too.”

One major event capitalizing on this year’s Juneteenth timing is an online Juneteenth Kabbalat Shabbat service. Organized by Be’Chol Lashon, an organization advocating for Jews of color, and Keshet, which focuses on LGBTQ Jewish issues, the event features two Black rabbis, Sandra Lawson and Isaama Goldstein-Stoll.

“We are celebrating what it means to live freely in the United States, and we also must remember that for many of us freedom is a journey,” Lawson wrote in the Forward last year. “The fight for freedom for all is not over. There is still work to be done. Juneteenth is an important reminder to all of us of why we fight: The struggle for freedom for all must continue because until we are all free, none of us is free.”

Here’s a list of Jewish Juneteenth events that anyone can join curated by our partners at Alma.

In Jersey City, New Jersey, where an anti-Semitic attack last year has fueled a renewed relationship between Black and Jewish leaders, a Shabbat Juneteenth event will feature Dennis Sebo, a local Black activist. And as it has for the past two years, the Jews of Color Caucus of Chicago’s Jewish social justice organization, the Jewish Council on Urban Affairs, is holding a Juneteenth Havdalah service to mark the end of Shabbat on Saturday evening. Other communities plan to incorporate a new prayer, Kaddish for Black Lives, into their Shabbat services this week.

“Creator of life, source of compassion. Your breath remains the source of our spirit, even as too many of us cry out that we cannot breathe,” reads the prayer, which was distributed this week by the Jewish Multiracial Network. “Lovingly created in your image, the color of our bodies has imperiled our lives.”

Robin Washington, a Black and Jewish journalist, suggested the creation of such a prayer a few years ago on a phone call for Jews of color activists. The time was right this year, said Eric Greene, a board member of the Jewish Multiracial Network who has Black, Native American and Ashkenazi Jewish ancestry. Greene followed through on the idea last week in consultation with other advocates in the Jews of color community.

“We use Passover as a time to reflect on the meaning of slavery and liberation, and what did it mean to us historically, and what does it mean to us today, and what’s our obligation currently on these types of issues of challenging oppression,” he said. “And I think Juneteenth is an opportunity for us all to do something very similar in the American racial context. So the idea of the Kaddish for Black Lives was to use Jewish ritual and tradition to reflect on the world in which Jews live today.”

Greene says Jews across the country have told him that they will be reciting his text this Shabbat. He hopes they will continue to do so for future significant events, such as Passover, Black History Month and Martin Luther King Jr. Day.

Some white Jews are asking themselves whether and how to participate in Juneteenth observances for the first time — while wading through thorny issues.

“Sincere question, from a place of learning: Is there a way for a (white) Jewish family to celebrate Juneteenth this Shabbat — as an American and Jewish imperative — without being appropriative or exploitative?” Yehuda Kurtzer, president of the Shalom Hartman Institute of North America, wrote on Facebook this week.

“It feels especially vexing because we can’t have guests or be guests right now” amid the pandemic, he added, “but we would like to be part of what feels like an urgent and overdue shift in the American liturgical calendar.”

Many of those who responded to Kurtzer’s post pointed him to the online Juneteenth Kabbalat Shabbat service, which takes place before the start of Shabbat so that people of all levels of observance can participate, and to the Kaddish for Black Lives. Others said they planned to include dishes in their Shabbat meals to honor African-American food traditions, some using recipes popularized by Black and Jewish chef Michael Twitty. And others said that they, too, were wrestling with questions about how to participate respectfully in a tradition that has not been their community’s.

One of those was Rabbi Yael Ridberg, who knew little about Juneteenth until recently but wanted to commemorate it at Congregation Dor Hadash, the Reconstructionist synagogue she leads in San Diego. Initially she wanted to do a Juneteenth-themed Shabbat, but after discussing the idea with Jordan Daniels, a friend who is a Jew of color, Ridberg, who is white, started having qualms.

“It became clear that what I needed to do in this moment was not to conduct a service as if I were a celebrant that understood this in my bones the way I understand any Jewish holiday on the calendar,” she said, “but rather begin a process of education, of awareness, in the hopes that in a year from now, either because members of my own community who are Black or people of color will see this as an opportunity to celebrate within a Jewish context, or because I will be able to invite a speaker, or because I will be able to do something different.”

Though Ridberg won’t advertise her Shabbat services as being Juneteenth-themed, she is still finding ways of incorporating the holiday, including a speech about its history, playing a recording of “Lift Every Voice and Sing,” considered the Black national anthem, and saying the Kaddish for Black Lives.

Chris Harrison, a Black Jew who works for the Union for Reform Judaism, wrote in an essay that he will be celebrating Juneteenth for the first time this year. He said the holiday inspires him to take action to make the country more just for Black people.

“As a Black Jew, I see Juneteenth as a beautiful reminder to not be complacent,” Harrison wrote. “While this holiday is a joyous one that affirms the Jewish notion that we are all created b’tzelem Elohim (in God’s image) and deserve to be free from bondage, it’s equally important to remember that the fight for true equality is ongoing.”