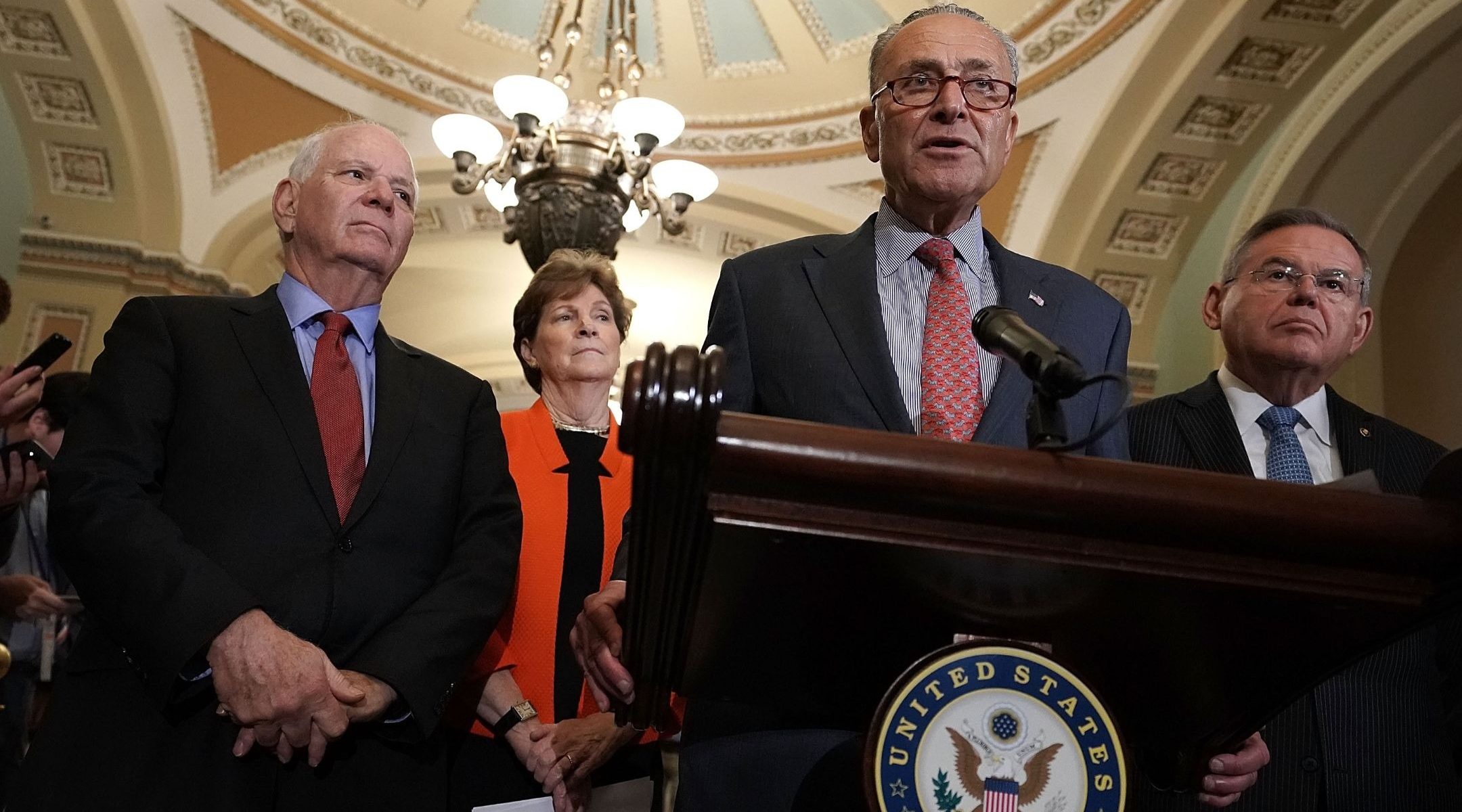 WASHINGTON (JTA) — Three of Israel’s most stalwart boosters among Democrats in Congress are warning the country against annexing parts of the West Bank.

Sen. Chuck Schumer of New York, the minority leader, and Sens. Ben Cardin of Maryland and Robert Menendez of New Jersey released a statement Friday saying they were “compelled to express opposition to the proposed unilateral annexation of territory in the West Bank.”

Israeli Prime Minister Benjamin Netanyahu wants to launch the process to annex parts of the West Bank on July 1.

The three senators are only the latest Democrats in Congress to warn Israel against the proposed annexation, but they may be the most significant, not only because Schumer leads the party but because they are often at the forefront of pro-Israel legislation.

Menendez has been a leader on Iran sanctions and Cardin is the lead author of a bill that would penalize Israel boycotters. The three were among only four Democrats in the Senate who opposed the 2015 Iran nuclear deal, a key foreign policy priority of then-President Barack Obama. (The fourth was Joe Manchin of Virginia.) Cardin and Schumer are Jewish.

“A sustainable peace deal that ensures the long-term security of Israel and self-determination for Palestinians must be negotiated directly between the two parties,” the statement said. “Unilateral annexation runs counter to those longstanding policies and could undermine regional stability and broader US national security interests in the region.”

A letter circulating among House Democrats issuing a similar warning has garnered over 120 signatures, including Rep. Steny Hoyer, D-Md., the majority leader, who is considered the congressman closest to the American Israel Public Affairs Committee. AIPAC opposes the letter.

If the letter organizers reach 200 or more of the 235 Democrats in the House, it will set up AIPAC and Israel for tensions with Democrats on a par with 2015, when the party was furious with Netanyahu for accepting a GOP invitation to use Congress as a podium to lash out against Obama’s Iran policies. At that time, however, Netanyahu had the support of many of the pro-Israel Democrats who now are speaking out against annexation.

Another 19 Democrats in the Senate sent a letter last month to Israel’s leadership saying annexation would “fray” ties with Democrats, and eight Democrats in the Senate separately issued their own statements or letters. Among them are senators who have been close to AIPAC, like Amy Klobuchar of Minnesota and Kamala Harris of California, whom Joe Biden, the presumed Democratic presidential nominee, is considering as a running mate.

In total, that’s 30 of the 47 Democrats in the Senate who are warning Israel against annexation.

The most recent on Friday was Sen. Kirsten Gillibrand of New York. She addressed her letter to President Donald Trump, whose peace plan released earlier this year gives Israel a green light to annex some settlements.

Gillibrand spells out in her letter what other Democrats have hinted: She is writing in part to give Netanyahu’s coalition partner, Benny Gantz, who has been ambivalent about annexation, a license to oppose the plan.

“I understand that the Israeli coalition agreement stipulates that annexation will only proceed under ‘full agreement with the United States’ and, in my capacity as a U.S. senator, wanted to notify you that I must withhold my agreement at this time,” Gillibrand said.