For the few Jewish camps that are opening despite risks, finding willing families hasn’t been hard 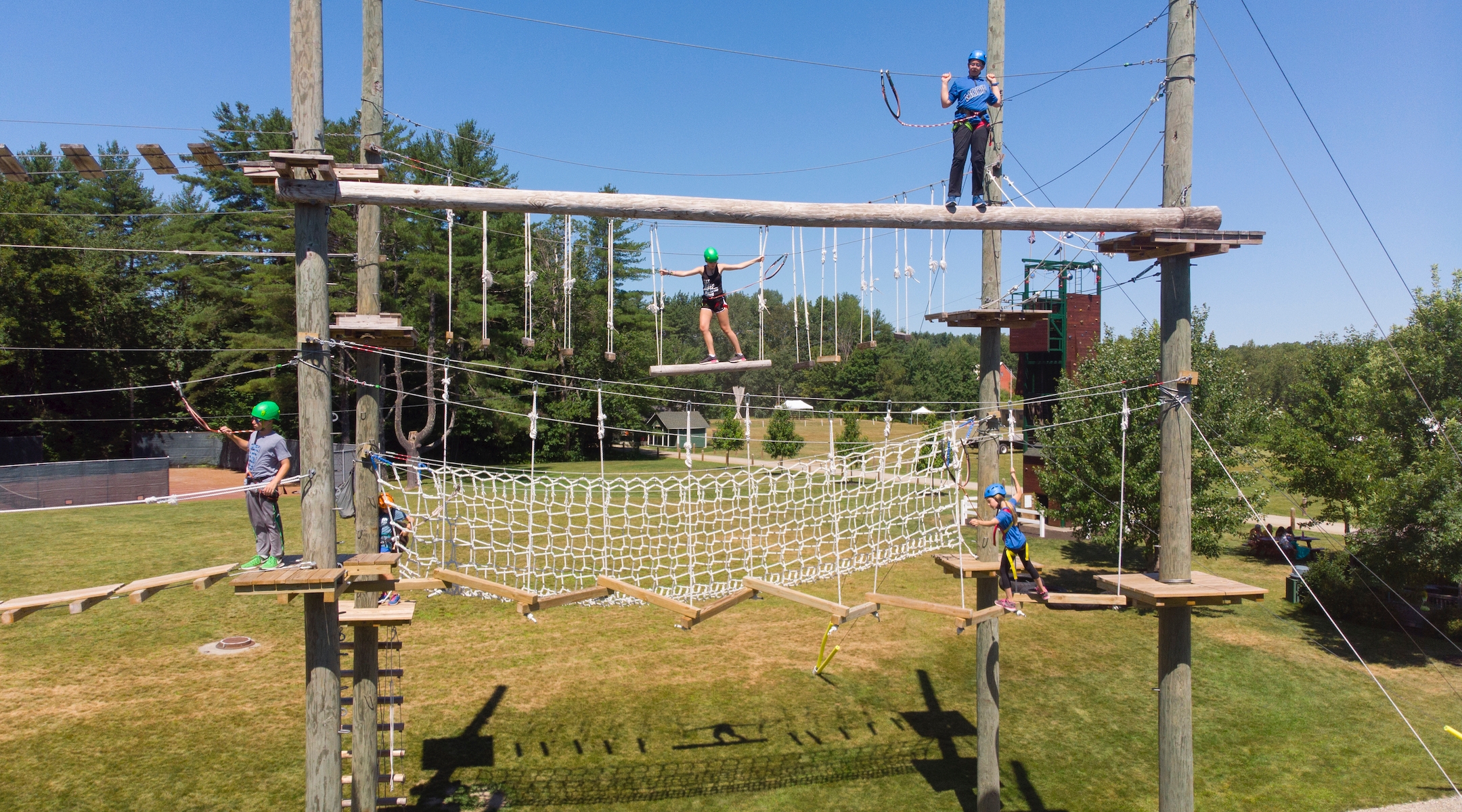 The ropes course at Camp Modin, which has seen immense interest from parents since announcing last month that it was opening this summer. (Courtesy of Camp Modin)
Advertisement

(JTA) — This week, as he prepares to open Camp Modin and administer coronavirus tests to its hundreds of campers and staff, Howard Salzberg is still fielding 50 calls a day from parents who want to send their kids.

That’s because Modin, a small, unaffiliated Jewish camp in Maine, is one of the only Jewish overnight camps to open in the United States amid the coronavirus pandemic. So Salzberg and his wife, Lisa, who co-own and run the camp, must deal with a continuing deluge of interest from parents even as they prepare the camp for summer and install a range of structural changes because of COVID-19.

Modin usually relies on 300 kids from mostly the same set of families who have come summer after summer, generation after generation. This year, the camp received some 600 applications. Salzberg said the camp was nearly full just 10 days after announcing it would open.

“We have kept it small,” he said. “We chose not to max out. We chose to limit the size of the bunks as best we could because we’re limited on how much of our camp programming we’re going to do this summer.”

As the pandemic stretches into the summer, and dozens of Jewish camps have announced their closures, camps that open are faced with a dual challenge: abiding by health regulations in a usually freewheeling atmosphere and dealing with parents clamoring to give their kids something approximating a normal summer.

“I’m working off the government’s permission and recommendations,” said Rabbi Shmuly Rothman, who will run a Chabad girls’ camp in Florida.

His camp, Tof Shin Peh, is new. Its name is Hebrew for 5780, this year on the Hebrew calendar, as if to emphasize that it was created to respond to the country’s predicament now.

“People are healthy and moving around, and when I saw that there are camps closing elsewhere and the state is allowing for it, I said, let’s see if it’s doable,” Rothman said.

Rothman launched the camp less than a week ago and expects it to fill up quickly, well before the July 20 start date. Unlike other Chabad programs meant for a general Jewish population, this one is internal to the movement, so the campers will need to come from committed, observant Chabad Hasidic families. And because he only has 96 spots, Rothman said he can afford to be selective.

“The camp is for girls in the Chabad community, so it’s attracting girls that want that atmosphere,” he said. The camp website says the “ideal” camper “is happy to be a Chossid” and “has high values for Torah and Mitzvos.”

The dearth of open camps has also put families that do get spots in an enviable position. Modin gave priority to returning families, and did not admit any new campers above seventh grade. In the younger age groups, only 5% to 10% of campers will be new.

“Everyone I know is super jealous,” said Sara Forman, who will be sending her kids to Modin for the fifth straight summer. “They’re all like, it’s so unfair, I wish our camp was open.”

Some of the Jewish camps that are opening, like Modin, are for-profit. But Salzberg said that the increased demand for camp won’t mean a profit on the year because of all the precautions the camp has had to take due to the coronavirus — from building a separate infirmary with 31 beds, in case there’s an outbreak, to erecting a huge outdoor tent for distanced campwide gatherings to administering multiple COVID-19 tests for campers and staff.

Salzberg said the camp is spending an extra $250,000 on the COVID-19 prep while taking in far less revenue because it’s running a shortened schedule, thus will lose money. Had the camp taken a summer off, he said, it would have been able to manage despite the financial setback.

And it’s not the only for-profit that’s running this summer. Two for-profit Orthodox camps in Pennsylvania, Lavi and Seneca Lake, are running as well. Lavi did not respond to multiple requests for comment, but an email to parents placed restrictions on transportation, established protocols for testing before kids entered camp, and limited entering and exiting the campground.

Of course, many camps in areas that permit opening are still remaining closed. Camp Morasha, an Orthodox camp in the same Pennsylvania county as Camp Lavi, made the decision to close a month ago. The nonprofit was set to serve 1,200 kids. Morasha’s director, Jeremy Joszef, has committed to calling each of the 625 families individually and said several have opted instead for Lavi.

“I did not get one complaint or one parent questioning our decision,” Joszef said. “If anything, we had an outpouring of support from our parents, a sense of pride in being associated with an institution that puts principle over profits.”

Elsewhere, however, parents have tried to get their kids into camp — not always with success.

“One of my middle son’s friends, they ended up being on a waitlist,” Forman said. “And then they were like, forget it, because no one is coming off the waitlist.”