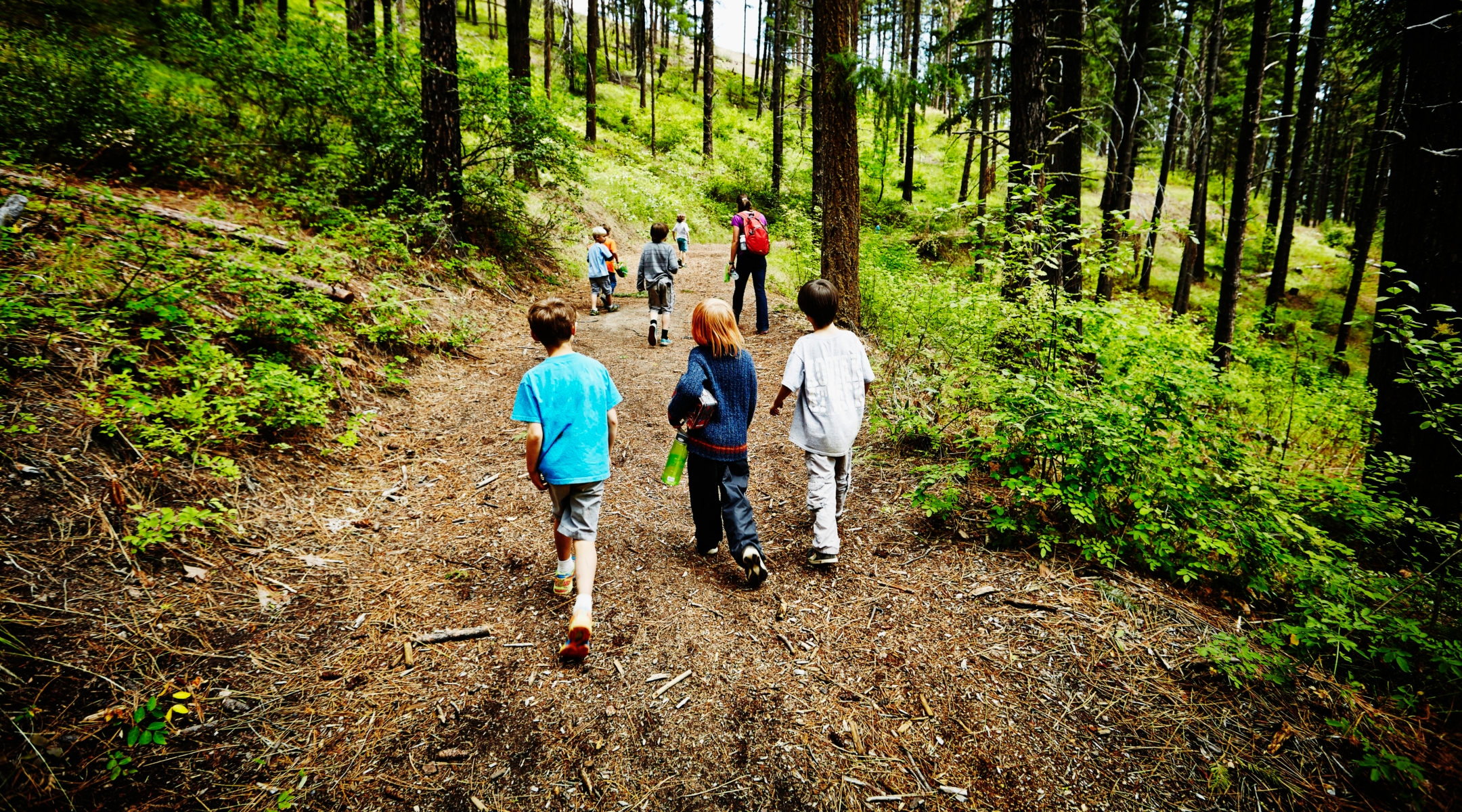 Campers walk in the woods with their counselor at summer camp. (Getty Images)
Advertisement

(JTA) — A Jewish camp in Pennsylvania is delaying its opening date after a counselor tested positive for coronavirus upon arriving at camp, in a scenario that could foreshadow the rocky path ahead for child care settings amid the deepening pandemic.

Camp Seneca Lake, one of the few Jewish overnight camps to open this year in the Northeast, was due to welcome campers on July 5 and 6, this coming Sunday and Monday. But that has been pushed back two days following the counselor’s positive test at staff orientation, according to an email the camp sent to families on Friday.

Now, the camp, which is Modern Orthodox and serves campers largely from New York and New Jersey, is testing all the staff the teenaged counselor was in contact with, and has quarantined them as well.

“This staff member had zero signs of being sick but out of extreme caution we have quarantined any other staff members that came into contact with him and we will retest them again in a few days,” the email read. “As all of our correspondence with our families has stated from the beginning, we set up this process to be prepared for a situation like this and all protocols are being followed accordingly.”

The Jewish Telegraphic Agency reached out to the camp for comment via phone and email on Friday afternoon.

The positive test could serve as a cautionary tale for the Jewish overnight camps that are opening this year — and for the many child care settings, including schools, whose operators are trying to devise ways to operate safely. Camps that are opening this year have said that multiple rounds of testing, plus safety protocols at camp, put the camps in a good position to weather the pandemic safely.

An email that Seneca Lake sent to parents in late May detailing some of the camp’s safety procedures said staff and campers would be tested before arrival and then several times at camp.

“This strict screening, combined with other safety protocols which include limiting the number of campers at camp, is a large part of our strategy to make camp as safe as it can be,” the May email said.

An email sent Friday said that the camp had received pre-arrival test results from 97% of campers, all of which were negative.

Many other Jewish camps have canceled their 2020 summers, either because their states are not allowing overnight camps to open, or because they feel they cannot run camp safely given the risks of the pandemic.

The counselor who tested positive has been sent home, and on Monday, the camp will receive the test results of the staff members whom he was in contact with.

With the virus spreading rapidly in many parts of the country, the camp will quarantine campers from outside the New York-New Jersey area until they receive results from tests taken upon their arrival, according to the camp’s second email to parents on Friday. The email did not provide details as to what that will look like.

“While it is unfortunate that one staff member tested positive for coronavirus, we trust the procedures that we’ve established, and we are prepared for this situation,” Seneca Lake told parents.