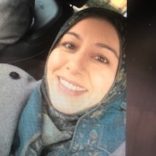 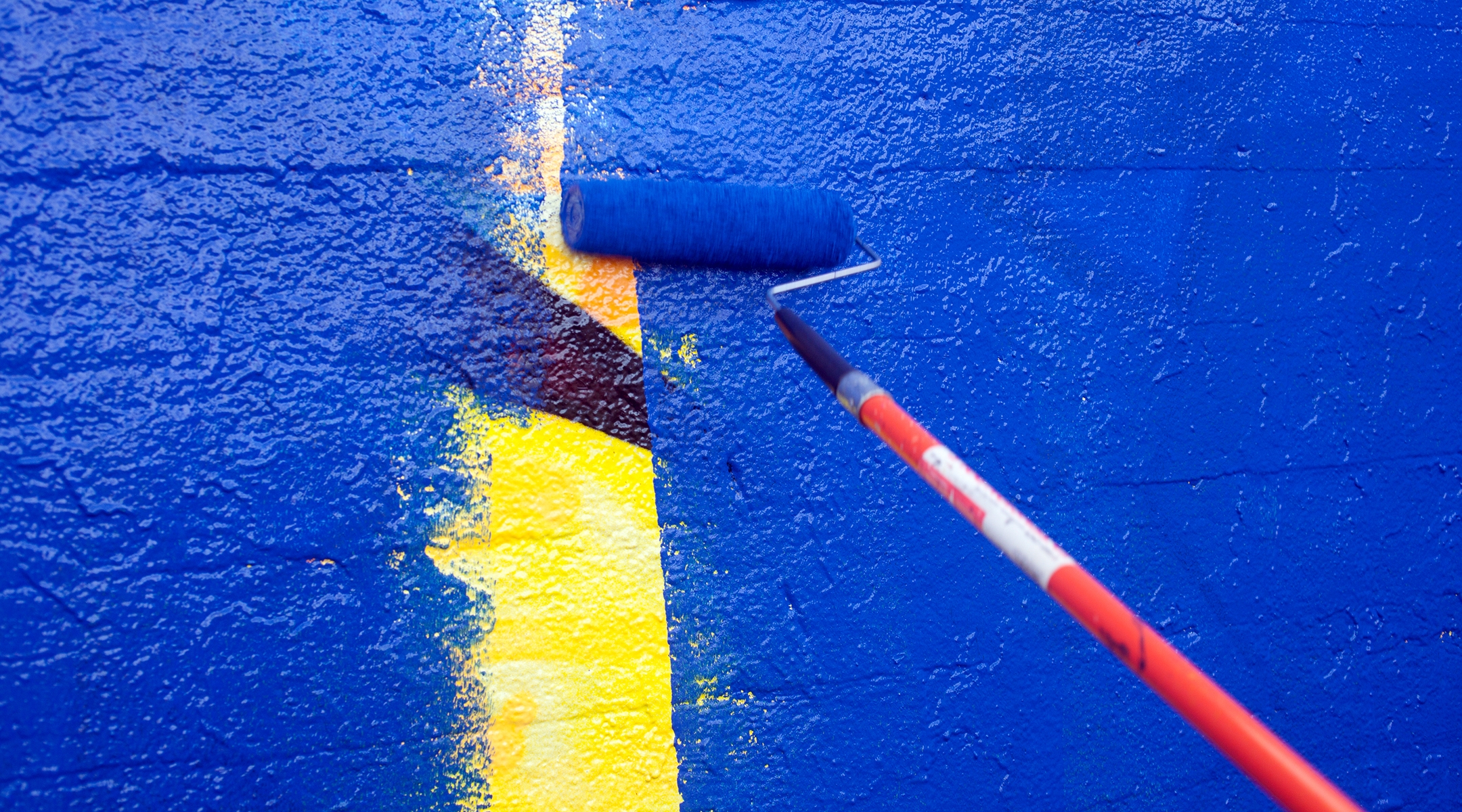 Here are two responses to an incident of anti-Semitic vandalism — from a Jewish woman and a Muslim woman — in Birmingham, England. The first is from Karen E.H. Skinazi; the latter is from Salma Hamid.

(JTA) — As my husband and I were taking our regular after-dinner walk, I stopped dead in my tracks. My hand flew to my chest, like a character in an overly melodramatic play.

My husband turned his head to follow my gaze. There, spray-painted across a free-standing brick wall on the other side of the street, were the semi-literate and fully offensive words “DIE JEWISH.”

Despite the profusion of anti-Semitic graffiti blasted across newspapers and social media every day, there is a surreal feeling when you encounter it yourself in your own neighborhood. This was our home — the same street we have traversed hundreds, if not thousands, of times in the past few months, confined to the distance our feet could cover during the pandemic.

Suddenly this expanse of my telescoped world was defaced with hatred. And we were the target of that hatred.

I called the police, but after long minutes of waiting, I gave up. We went home and I emailed my member of Parliament, trying to impress upon him the offensive nature of the graffiti as well as the importance of his timely response. I received an auto-reply.

My husband uploaded incident reports on the police and city council websites. We waited to hear that there would be some plan of action — that the anti-Semitic message would be removed immediately. Would my concern be taken seriously? Would anyone act on it?

Then it occurred to me to contact some of the most helpful, proactive women I knew: my fellow members of Nisa-Nashim, a network made up of Jewish and Muslim women across the United Kingdom.

I opened WhatsApp and wrote to my local chapter. Within seconds, the support came pouring in.

The next day, a Friday, I arrived at the scene to find Salma already there. I had met Salma through our Muslim and Jewish book club, a subgroup of our local chapter of Nisa-Nashim. As soon as I had sent the photo to Nisa-Nashim, she offered to meet there as an active ally. Shortly after 2:30 p.m., a group of us had formed: Jewish and Muslim women, bareheaded and headscarfed, pre-prayers and post, congregated in front of the offensive message defacing the wall of my neighborhood.

We came equipped! We had signs and bunting, chalk and posters. We donned sashes, suffragette-style — only instead of “Votes for Women,” our swathes of satiny pink fabric were adorned with the name of our group, “Nisa Nashim, Jewish Muslim Women’s Network.”

We were not alone for long. A police constable, Adrian Griffiths, soon showed up with a box of tools to remove the paint. Steve McCabe, the Parliament member for the constituency (contacted by one of the Nisa-Nashim women) appeared, despite the short notice. So did an undergraduate student at the University of Warwick, representing Citizens UK, and the rabbi of the Birmingham Progressive Synagogue.

Until the constable could remove the offensive words, we covered them with bunting left over from the 2020 Great Get Together, a community event inspired by the murdered lawmaker Jo Cox who, in her first speech in Parliament declared, “We have more in common than that which divides us.”

The bunting comprised little notes that encouraged goodwill toward one another: “Love More, Hate Less,” “We are all part of one race — the human race,” “We need to respect differences” and “I believe in the power of community.”

Once the graffiti had been removed, we wrapped the bunting around a nearby tree to stand testament.

As I walked home, buoyed by our shared efforts, I thought about a Friday night dinner at our synagogue that my husband and I had attended in the autumn. The speaker, a rabbi who leads Holocaust tours in Poland, told us that he had met hundreds of survivors, and the message they had was not one of despair or revenge, but rather that love conquers all.

It was a nice message for a Friday night dinner — but it didn’t resonate with me in the slightest. The message I grew up on, passed down from my Holocaust survivor grandmother who lost her parents, sisters, brothers, cousins, nieces, friends and her home, was a lot less rosy: Trust no one.

Yet when this anti-Semitic graffiti showed up on my doorstep, I found I could trust and depend on not only my Jewish sisters, but also my Muslim ones. It amazes me to think that in less than 24 hours, the anti-Semitic message of hate I saw blazoned across a local wall on a Thursday night was replaced by signs of love by Friday afternoon.

On Friday evening, after dinner, my husband and I again set off for our evening walk. I suggested we head in the direction of the incident. By then I figured our chalk rainbow would be long gone, as it had drizzled pretty steadily all afternoon. But I wanted to see the constable’s handiwork; he had still been busily scrubbing at the paint when I left earlier. As we approached, I saw ghostly traces of the anti-Semitic words on the wall — just barely. Far bolder, in bright colors, not the least impacted by the rain, was our beautiful rainbow, and beside it, our monumental pledge to solidarity.

Salma Hamid: “I had never seen anything so blatant, so grotesque, so close to my home!”

“Die Jewish” – the chilling, hateful words were scrawled across a stone wall along a busy, residential road in Billesley, Birmingham. My friend Karen had seen it during her evening walk after work last week and shared the image on our West Midlands, Nisa-Nashim WhatsApp group — a safe space for proactive Muslim and Jewish women to connect as friends. I stared at the image for a few minutes. I had never seen anything so blatant, so grotesque, so close to my home!

Karen had reported it already to the local police and the CST — Community Security Trust, the charity that protects British Jews from anti-Semitism and related threats. Within minutes, we were all contacting our Parliament members, local councillors and groups engaged in community cohesion initiatives. We could not stand by and allow the awful perpetrator succeed in sharing this vile, anti-Semitic message.

Driven by my faith and my frustrations, I suggested that we all meet at the wall the next day and clean it off together. We arranged a suitable time, after Friday prayers, so Muslim women in the group could join us. We had also planned to meet the local MP, the police and a rabbi.

I did not sleep well that night — the image reappeared in my mind again and again. Birmingham is my home — I was born and raised here. My children had attended a school five minutes from the graffiti; I had never experienced this myself before. I wondered if Karen was this restless, too.

Online, news reports during the pandemic proclaimed a dramatic increase in hate crimes. What is wrong with these people?

The following afternoon, armed with homemade posters, bunting and a reenergized sense of solidarity, I set off to meet Karen and our Nisa-Nashim allies. Standing before the wall and seeing the words for myself, my shoulders dropped, and I felt an overwhelming sense of despair for a person I had never met. This soul needed guidance, reeducating and prayers to be better.

When Karen arrived, she was clearly shocked. Her grandparents had survived the horrific Holocaust, so to see this ugly message was very emotional and unexpected for her. I noticed she was wearing large “Jewess” earrings — loud, proud and definitely the right choice for this occasion.

We were soon joined by some of our Nisa-Nashim friends, the local MP, a police officer (he had brought along special paint removal tools) and the rabbi.

Our immediate, collaborative actions led to the swift removal of the aggressive comment. It was replaced by a beautifully chalked rainbow with clear messages of hope and unity: “NISA-NASHIM. STANDING TOGETHER AGAINST HATE.”

Karen E. H. Skinazi
, PhD, is a senior lecturer and Director of Liberal Arts at the University of Bristol in the UK. She is author of Women of Valor: Orthodox Jewish Troll Fighters, Crime Writers, and Rock Stars in Contemporary Literature and Culture (Rutgers University Press, 2018).

Salma Hamid
is a school teacher, office manager, caseworker and community organizer, and a co-chair of Nisa Nashim.
The views and opinions expressed in this article are those of the author and do not necessarily reflect the views of JTA or its parent company, 70 Faces Media.