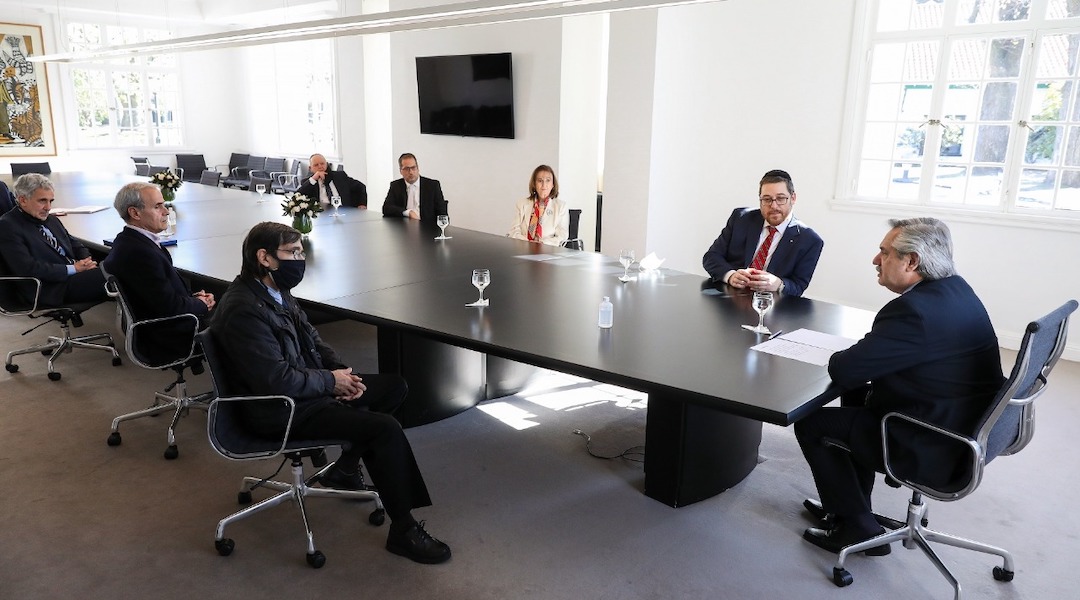 Argentina's President Alberto Fernandez, right, met with the head of the AMIA Jewish group and the father of an AMIA bombing victim in Buenos Aires, July 14, 2020. (Courtesy of AMIA)
Advertisement

BUENOS AIRES (JTA) — In the days before the 26th anniversary of the Buenos Aires AMIA Jewish center bombing that killed 85 in 1994, Argentina’s President Alberto Fernandez has conveyed to Jewish leaders his desire to end the decades-long legal case that followed the attack, which has been complicated by corruption allegations and the likely murder of Jewish prosecutor Alberto Nisman.

Speaking in an online event Thursday with Dina Siegel Vann, the director of AJC’s Belfer Center for Latino and Latin American Affairs, Fernandez said “condemnation of terrorism can’t be under discussion, as the Holocaust, it can’t be neglected nor tolerated.”

Fernandez’s comments are significant given that his vice president, Cristina Fernandez de Kirchner, has been on trial for years over allegations that she conspired with the Iranian government to cover up Iran’s involvement in the bombing.

Fernandez’s predecessor, the conservative Mauricio Macri, took a hardline stance on the investigation, vowing to find justice for the bombing victims and for the family of Nisman — who was found dead in his apartment on the day in January 2015 he was to present his findings in the case.

Iran and Hezbollah, the Lebanese militant group, have long been linked to the attack, and seven people — six Iranians and one Lebanese — have been on Interpol’s most wanted list since 2007. During the online event, Fernandez said Iran’s refusal to extradite suspects has been a key factor in the investigation’s holdup.

Argentina signed a controversial Memorandum of Understanding with Iran in 2013, under Cristina Fernandez de Kirchner, which stated that the two countries would jointly investigate the attack. The agreement was voided in 2015 after critics said it violated the executive branch’s principles of independence. Even though Fernandez opposed the pact in the past, on Thursday he said that it was an effort to advance the investigation.

“Even the memorandum with Iran, which I opposed, was a way to resolve the problem,” he said.

Fernandez, a former attorney and professor of law at the public University of Buenos Aires, revealed that one of AMIA victims, Paola Czyżewski, was a student of his at the time.

“[S]he was a very good student,” he said. “Paola was 21 years old when the attack killed her.”

On Tuesday, Fernandez met with the president of the AMIA Jewish communal group and Julio Barreiros, father of Sebastián, who at 5 was the youngest victim of the 1994 terror attack.

In the meeting at the president’s residence, AMIA head Ariel Eichbaum called for an end to the bombers’ impunity and asked that the Interpol red alerts about the Iranian defendants be maintained.

“For twenty six years we have lived with this impunity and there is not a single person detained for this crime against humanity,” Eichbaum said.

The latest complication in the AMIA case is the impending resignation of the judge involved, who is reaching the 75 year age limit for a federal judge later this month.

“The simple fact that a new judge must be appointed who will need to read and understand this huge and complex investigation is another difficulty,” said AMIA attorney Miguel Bronfman in a webinar organized by the Argentine Avoda organization on Wednesday. “This is another element that makes me feel that justice in this case is far from being obtained.”

This year, for the first time, the commemoration of the July 18 terror attack won’t be in the form of a massive gathering in front of the rebuilt AMIA headquarters — it will be online. Argentina has been in mandatory quarantine since March 20.

The event will include messages from relatives of the victims, Jewish leaders and the former prime minister of Spain, Felipe González.

“This year the claim is virtual but our cause is still real as ever,” AMIA said in a statement.